Leaving behind Riley’s Row and Arthur Reuben Johnson, we come to the premises of Henry Carrier. Adeline remembers that “Henry Carrier had a double-fronted house, and small factory at the rear, where he had one or two lace machines. After Fritchleys left their house, which was next to his, Henry took it and enlarged his business.”

Confusingly, there were several ‘Henry Carriers’ in Ilkeston at this time, and a couple of them were approximately the same age .. and both in the lace trade. This one was the son of Anchor Carrier, framework knitter of Bath Street, and Betty (nee George). He was born in November 1814 and married Rebecca Hart*– daughter of Humphrey and Ann (nee Holmes)? — in October 1834. Anf this Henry was the cousin of another one whom we shall meet later, as we walk towards the southern (top) end of Bath Street —  a long way to go still !!

(*In fact Rebecca Hart was the daughter of Thomas and Hannah (nee Meakin), baptised at Greasley in May 1811. My thanks to Jennifer Beldam for pointing this out … the Ilkeston Wesleyan Methodist baptism of eldest child Ann Carrier shows Rebecca’s parents.
Jennifer suggests that the ‘other’ Rebecca Hart married Shipley Common coalminer George Severn in 1827 … she died in Ilkeston in 1878, aged 68)

Henry moved into New Street in 1854, when he puchased a lacemaker’s shop from joiner Joseph Wilson of Wilton Place — whom we have just met. This was shortly after Joseph had sold off several building plots in Bath Street.
Henry Carrier’s neighbour in New Street was William Fritchley, a Cossall-born butcher but living in Ilkeston when he married Ann Dodson in April 1818 at Sutton in Ashfield. He had a home in East Street, then in Bath Street until the mid 1860’s when he moved into New Street.
Ann died there in April 1865, aged 70, and William in August 1872, aged 84.

Children John, Catherine and James Fritchley continued to live there until the later years of the century.

The Carrier children of Henry and Rebecca

Adeline recalls the family of Henry and Rebecca, though not fully …..
“(Henry Carrier) had five sons. William, Henry and George worked with their father.
“All the Carriers of those days were descended from one stock, and these three sons of Henry were typically Carriers. They always walked out together, and could be seen some part of each day walking down Bath Street on the carriage way. They were dark skinned, full whiskered, and only of medium stature. They were called the ‘Three Hebrew Brethren’”

In fact, during the first 20 years of their marriage Henry and Rebecca had at least 11 children (seven sons and four daughters), three of them dying very young.

Enoch, the eldest, was an assistant at Mr. Joseph Carrier’s grocery establishment, Bath Street.
Enoch was born in 1839 and we shall meet him again very shortly.

Anchor (the second) born in 1843, married Priscilla Mitchell in 1868. She was the illegitimate daughter of Mary Mitchell and collier John Hart, and since the premature death of her mother in 1849, had been brought up by her maternal grandparents.
The first child of Anchor and Priscilla was illegitimate daughter Mary Maria Mitchell, born in 1865, who later adopted the name Carrier.

Henry junior (1844) married Ruth Fulwood in November 1863 and within 25 years had 14 children, all born in the Station Road area. Ruth was the youngest child of coalminer William and Hannah (nee Hardy).

Born in 1846 Maria (the second) and Samuel Smith, coalminer of Bath Street, had an illegitimate daughter, Eliza, before marrying in 1868. I counted 11 children before I lost the family in 1901.

George was born in 1850 and married Alice Beardsley in August 1872 and within 20 years the couple had 10 children. Alice was the eldest child of lacemaker Joseph and Elizabeth (nee Cartwright) of Duke Street, her mother being the elder sister of John Cartwright

Hannah was three years old when she died in January 1856.

Adeline identifies Henry junior and George, both lacemakers, as two of the ‘Three Hebrew Brethren’. There appears to be no son William Carrier.
Anchor perhaps makes up the trio?
Or more likely, it was Enoch?

Bankruptcy … and the demise of the firm.

At least for the last decade of his life, Henry senior worked with his two sons, George and Henry junior, as suppliers to Messrs C. and F. Sudbury, the father doing journeyman’s work for the Sudburys until his death in 1884. At that point Enoch joined with his two brothers in a partnership to produce their lace and taffeta at the Station Road factory. They traded as Henry Carrier & Co., although it became clear that neither Henry junior nor George had sufficient understanding of the management of the business to operate it successfully. They had previously left ‘operational details‘ to their father, and now those were in the hands of their brother Enoch.
Since May 1879 Enoch had traded, successfully, as a grocer in Bath Street, but this business was not now incorporated into the partnership, and Enoch continued it independently. Thus, Henry and George operated as ‘working partners ‘ in the lace and taffeta production and were paid a weekly wage of 25s for their work; Enoch acted as manager and salesman.

Problems with delayed orders led to financial difficulties which mounted up and culminated in the firm’s bankruptcy in October 1888. Both Henry and George blamed the bankruptcy on Enoch — he had been responsible for ‘keeping the books’, had not allowed the other two to have sight of them, and kept them both in the dark. Enoch was ‘a designing man and the failure was in consequence of  the manner in which he conducted the business’.

It was while the brothers were being examined by the Bankruptcy Court at the end of 1888 that Enoch ‘left’ Ilkeston for America. Eventually, in May of 1889, the two brothers who had remained in Ilkeston were granted an unconditional discharge from bankruptcy.

Also in May of 1889 the freehold, three-storied Carrier factory and house in Station Road, with its yard and outbuildings, were put up for auction. Included in the sale were a five horse-power steam engine, and a boiler with pulleys and shafting. Unfortunately (for the vendors), at the auction, no-one was iterested in making a bid. 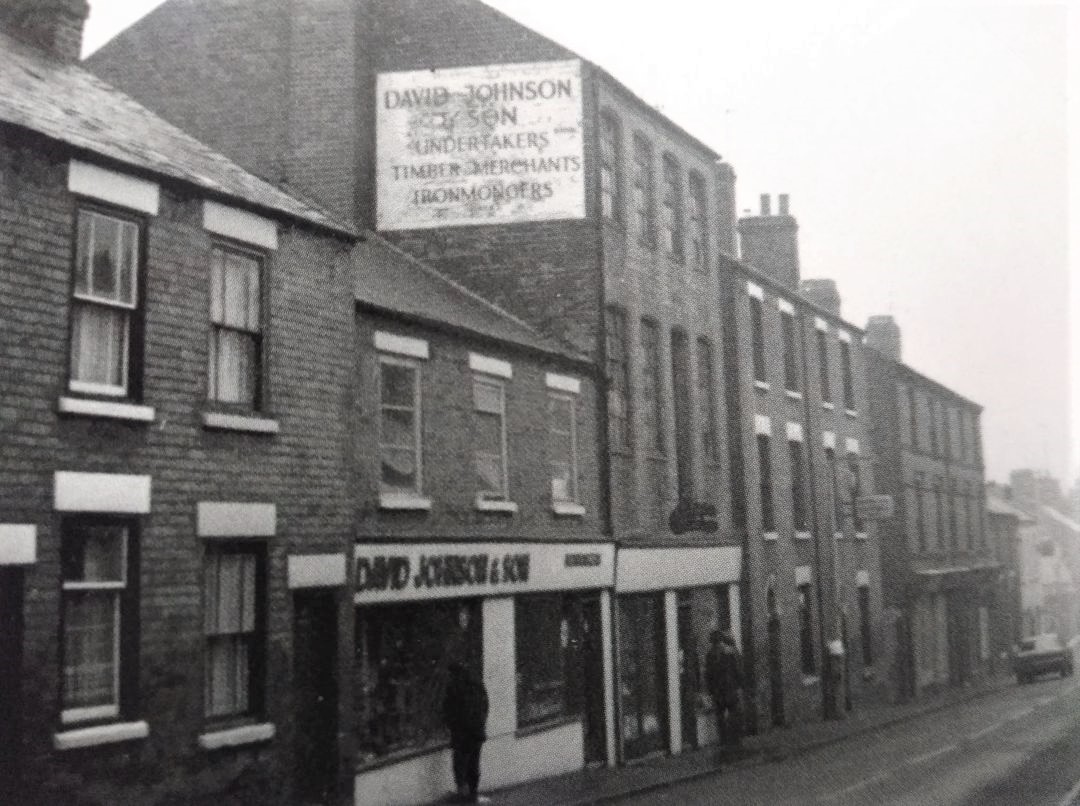 the three-storied lace factory of Henry Carrier in later life

“Regularly for many years, Henry Carrier could be seen at a certain time on Sunday morning crossing Queen Street fields, on his way to the Dale, where he spent the day, returning home in the evening.”

Rebecca Carrier died at the Station Road home in December 1882, aged 71.
Her husband Henry senior died there in November 1884, aged 70.
In his will he left the factory to brothers Henry junior and George, though shortly afterwards, in 1885, brother Enoch joined them in a lacemaking partnership.
Four years later — by the end of October 1888 — and their business was bankrupt. Enoch blamed this on the fall in the price of taffeta, occasioned by a cheaper class of German goods.

we can now go to visit …. Samuel Wood, grocer and baker