Along from Toll Bar corner Adeline next introduces us to … “the shop and private house of old York, the marine dealer.

So, what was a Marine Store Dealer ?
Google it and you might find — “It was originally the proprietor of a store selling equipment to Mariners, perhaps components of old ships such as sails, cordage, ironwork, and other provisions found on a ship. For sure there were those who aspired to that … but later most were, more often than not, junk dealers … dealers in scrap materials. They operated as the hub of a barter economy which enabled them to develop quite large businesses in crockery ware, hardware of every kind, fur, wool, and every conceivable article of trade and commerce”. 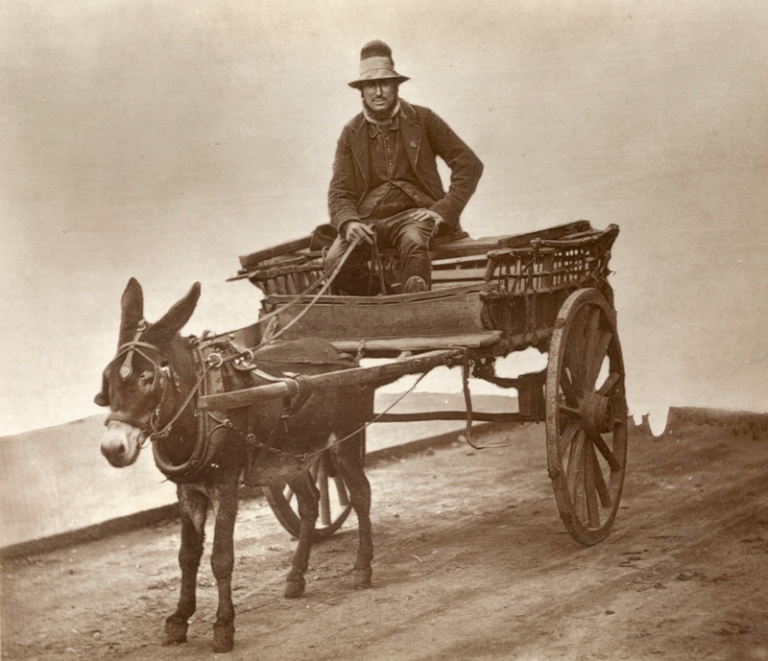 “Old York had a small cart and donkey for his rag and bone collecting”.

Joseph York (alias Old York) left Hucknall Torkard — where he was a smallware dealer — in the 1850’s and arrived in Ilkeston with his wife Ann (nee Dove) and several of his children.
Their older children — Henry, Mary, Ann, Hannah — would not be recalled by Adeline as they had left the family home before the move to Ilkeston.

He had two sons and one daughter”.

According to Adeline “the eldest son married Harriet, eldest daughter of George Riley, New Street, now Station Road. He left Ilkeston when a young man.”
This ‘eldest son‘ was Joseph junior and was in fact the second son, a plumber, painter and glazier who married Sarah (not Harriet) Riley in September 1861, the daughter of New Street lacemaker George and Charlotte (nee Cockayne).  (See Riley’s Row)
(George Riley’s eldest daughter Harriet had in 1856 married James Henshaw, brother of Bath Street fishmonger William, but had died a few months after this marriage.)

Puzzle alert!
Sarah Riley had an illegitimate daughter Harriet two years before her marriage to Joseph York junior.
As Sarah York she then had three further children with Joseph before he ‘disappeared’ in the later 1860’s.
One further illegitimate child, John York, was then born in 1870.
What happened to Joseph York?
What happened to Sarah York after the birth of son John?
The last ‘sighting’ I have of her at the moment is on the 1871 census at 5 Daykin’s Row, off Bath Street.

Billy Boy has a possible solution to this puzzle. (see Comments).
The following is based on his suggestions.

After the disappearance of her husband, Sarah found a new ‘partner’ in Cotmanhay-born labourer John Henshaw and within a few years moved with him to the Park Street area of Lenton, Nottingham. They were accompanied by Sarah’s daughter Nelly (now a Henshaw) and there a son — Stephen Henshaw — was born in 1873.

The 1901 Census finds the family in Calverton where John and now-married son Stephen are publicans.

And by 1911 John is a widower, living in Radford, Nottingham.

…. illegitimate daughter Harriet Riley, born in February 1858, married in June 1878 to coalminer Frederick Beardsley, son of Cotmanhay miner Frederick and Charlotte (nee Sisson) and for a time lived in one of the Riley Houses in Station Road.

…. daughter Nelly York alias Henshaw was born about 1865 and may have married William Dickinson in 1893.

…. illegitimate son John York was born in December 1870 and may appear on the 1881 Census as John Henshaw, living with his Henshaw grandparents. (see below)

At least one further question now arises ……. who was the Cotmanhay-born John Henshaw who whisked Sarah away to Nottingham?

One possibility is that he was the husband of Julianna Sisson who married in April 1871 and who separated less than two months later.
Between these two events their daughter Madeline was born.

Born on Christmas Day 1851 Julianna Sisson was the daughter of Cotmanhay coalminer Thomas and Elizabeth (nee Stirland) and already had at least one illegitimate child — Gravelina Sisson born in 1868 — before her marriage.

John Henshaw was (perhaps) the son of Leicestershire-born shoemaker later publican later farmer Stephen and Mary Ann (nee Aldred).
(Stephen was not a common name among the numerous Ilkeston Henshaws … in fact it does not appear in birth or baptism records of the town throughout the nineteenth century. But its choice as the forename for the Lenton-born son of John and Sarah may be a clue to the parentage of John.)

P.S. On the 18881 Ilkeston census Stephen Henshaw senior is farming at the bottom of Stanton Road and living with him is a grandson John Henshaw, aged 10.
Could this be Sarah York’s illegitimate son John York?

Just a few weeks after the marriage of Julianna Sisson and John Henshaw the former was accusing the latter of assaulting her.
One May evening she had gone to the Hand and Heart public house in Cotmanhay, carrying her baby Madeline with her. John was angered, hit his wife and sent her reeling, swearing that he would knock her bloody head off.
‘This unpleasantness was caused by some interference of his sister’.
Julianna’s accusations led to a court case at Heanor Petty Sessions.
When John appeared there to defend himself he was in a very bruised and battered state and argued that he was ‘not fit to bear the anxiety and excitement of the trial’. He claimed that Julianna’s mother Elizabeth and two of her older brothers, Albert and Ezekiel, had sought premature ‘justice’ and had beaten him severely… he had been put right off his food and was unable to go to work.
John’s incapacity led to a week’s adjournment of the hearing when the concerned parties met again, this time at Ilkeston sessions.
There the judge successfully urged reconsideration by the ‘injured defendants’.
All charges and counter-charges were withdrawn ‘in order to avoid publicity in what was a family quarrel between a man and wife and her relations’ … so long as John would pay the legal costs of his wife. John agreed and the pair went their separate ways.

Within a year of her separation Julianna had found a new, more ‘durable’ partner — Barzillai Jonathan Horridge, a Cotmanhay coalminer and son of John Horridge and his second wife Mary (nee Pollard).

Their illegitimate daughter Mary Elizabeth Horridge Henshaw was born in August 1873 before — in October 1874 — Julianna decided to go through a bigamous marriage with Barzillai. The couple chose a suitably secluded spot about 140 miles away from Ilkeston — at St Anne Parish Church in Bishop Auckland, Co. Durham.
On their return to Cotmanhay the couple represented themselves on every subsequent census as man and wife  and their children as legitimate.
However the latter were all registered as ‘Horridge Henshaws’, children of the ‘single’ Julianna Henshaw (nee Sisson) … they were Isabella, John Thomas I, John Thomas II, Keturah Louisa, John Thomas III, Martha Ann, Ada May, Bertha, John William, and Martha Alice.

Julianna died in 1911 as a Horridge at 5 Horridge Street in Cotmanhay.
Brazillai died in 1927 at the same house.

Adeline describes son Charles as “a painter and decorator. I think he married Miss Whitchurch.

Charles York was in the same trade as his elder brother.

In April 1872 he married Elizabeth Ann Whitchurch, eldest daughter of miller and baker John and Eliza (nee Hallam) and the sister of William Alfred who inherited the South Street furniture store of William Armstrong in 1870.

In the early 1870’s the family moved from South Street into Bath Street, there to remain. Charles moved into 110 Bath Street, the premises previously occupied  by watch and clock maker Joseph Carnill.  This was opposite Number 8A Bath Street – home to the Sun Tea Company in 1878. 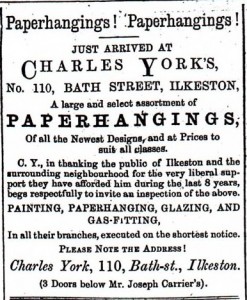 From the Ilkeston Pioneer November 18th 1875.

“Lucy was at home” is all that Adeline recalls

Gap alert!What happened to her after this date?

Eliza York, born 1837, seems to have travelled to Philadelphia, Pennsylvania in the late 1850’s, and then returned to Queen Street Baptist Chapel for March 8th 1870, where she married John Henry Flood of New York. And then …??

None of these siblings seems to have made a home in Ilkeston. One who did however and not mentioned by Adeline is Caroline Elizabeth York, born in 1848 and  married in 1866 to furnace labourer Henry Ironmonger, the younger brother (possibly half-brother?) of bootmaker Nahum whom we met in Derby Road.

Appearing on the 1851 census, while the family was still living at Beardall Lane in Hucknall Torkard, was son David, aged 7, whom I thereafter ‘lost‘. I want to thank Sally Kent (nee Yorke) for ‘finding’ him for us.

Sally writes that “Joseph Yorke (Old Yorke) married to Ann Dove were my 3rd great grandparents. His son David b 20 Oct 1843 is not mentioned! My great, great grandfather. Born between Joseph and Charles, he is with them all on the 1851 census in Hucknall.
In 1859 he joined the army and was posted to India (a serjeant (sic) in the 107th Foot), where he married (14 Oct 1872 Dum Dum, Bengal, India) Elizabeth Caroline Pearce the 14 year old daughter of Robert Pearce, a private in the 107th foot, who had died 6 years earlier of smallpox, almost as soon as he arrived in India.
They returned to England on 31st Dec 1875 and finally settled in Chichester. He was now a colour sergeant. They had 14 children, the eldest being Charles Yorke, my great grandfather.”

This wonderful information has led to David’s army records, part of which is shown below. Note that his birth date of October 20th 1843 was recorded at his baptism at St Mary Magdalene Church in Hucknall Torkard … look closely at his attestation paper below…. 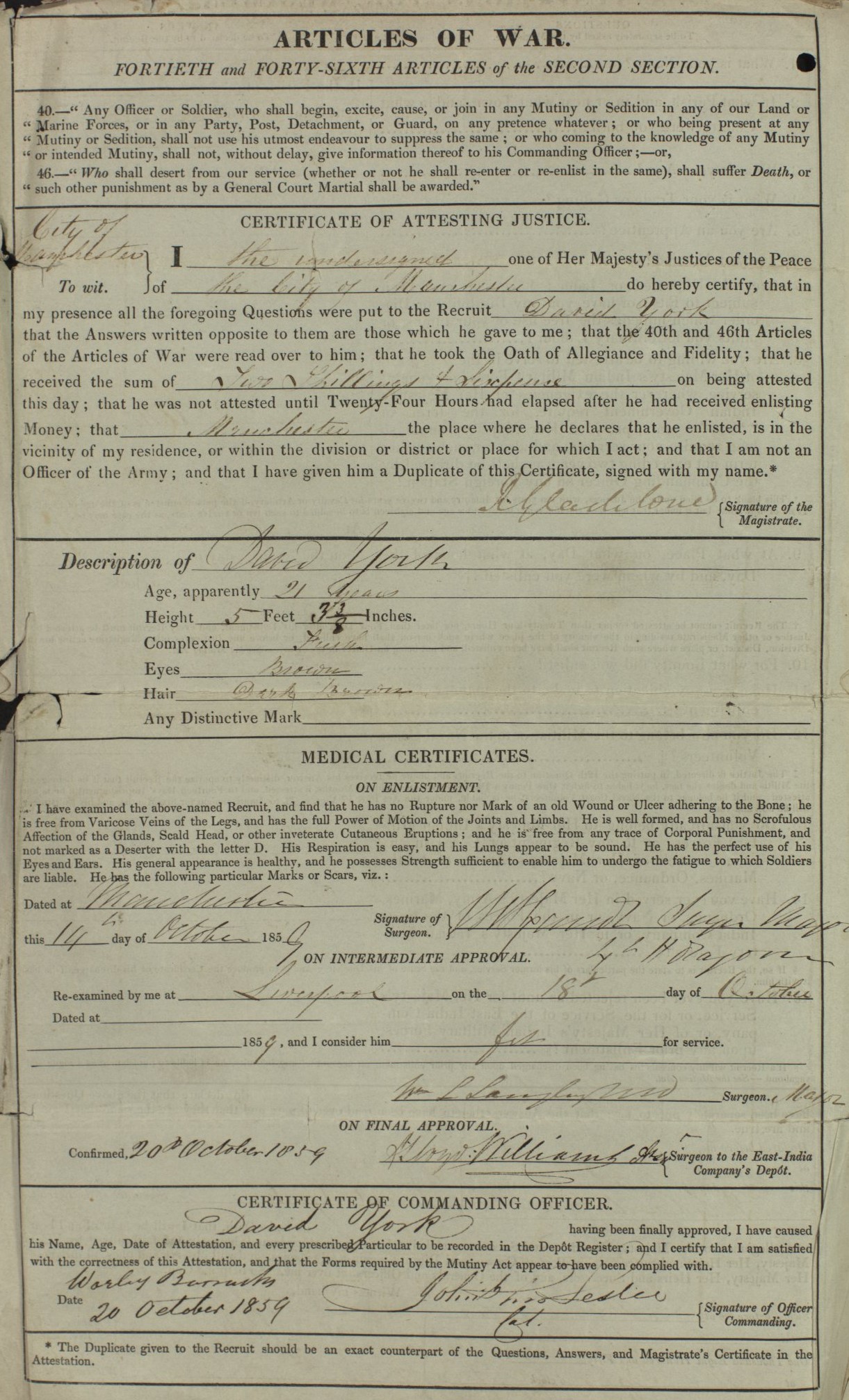 And David’s army record (below), though difficult to read, is well worth a close look. 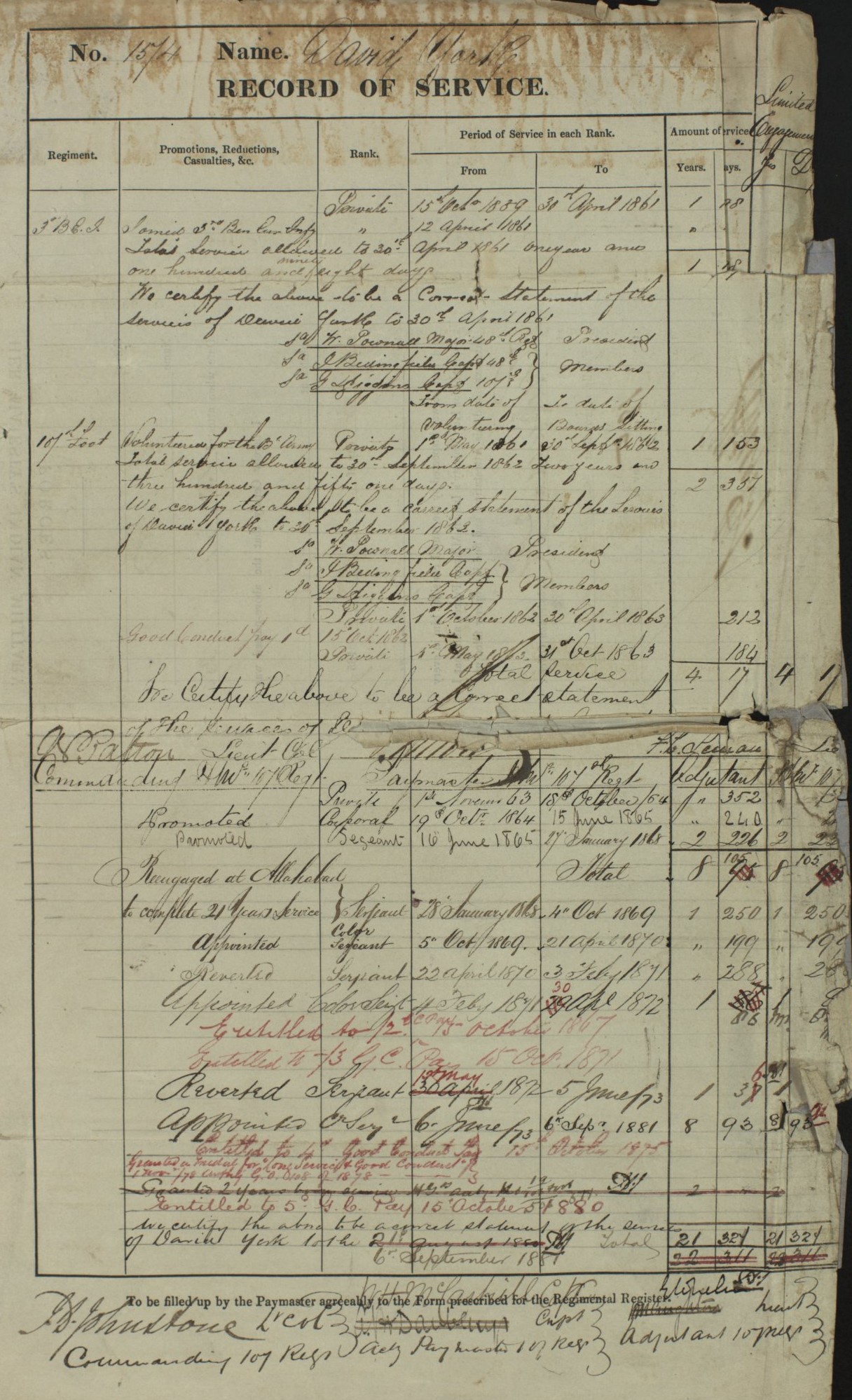 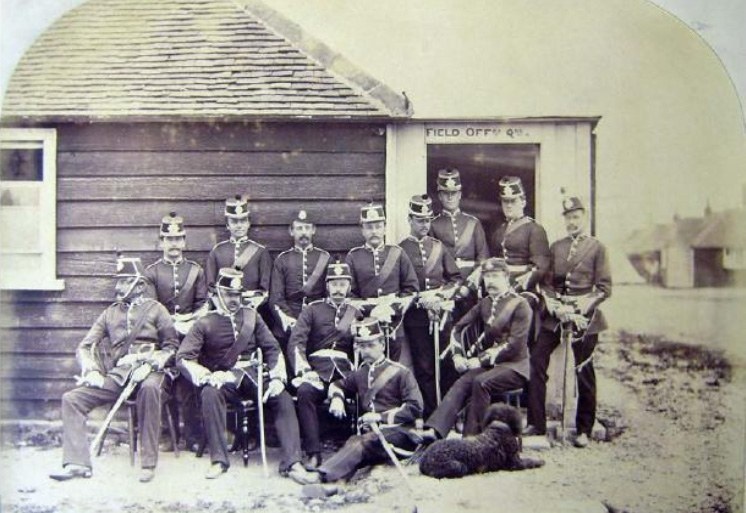 Relaxing at Roussillon Barracks in Chichester .. date unknown (at least to me !!) 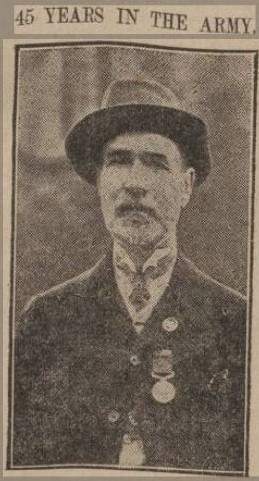 The photo (left) and short article (below) sent by Sally, are from the Manchester Courier and Lancashire General Advertiser, September 10th 1913.

We are now at Robey’s Yard.