Adeline describes this corner …. There were two small cottages* in the corner, between the Toll Bar, and Ralph Shaw’s saddlery shop.
Mrs. Hallam, a widow, and her cripple son, lived in one of them. He had a wooden leg and the boys called him Peg-leg Hallam

Gap alert!!    Who were Mrs Hallam and her cripple son?

The 1871 census shows Thomas Pemblington alias Pembleton living here. He is the 19 year old son of Elizabeth Pembleton who married John Levers in 1859. He is described as ‘lame in hip’.

*In 1985 Joan Riley described her childhood (1921-1934) while living in the smaller of these two cottages …. and although this was several decades after the Victorian era, the description evokes a little of the life led in the later nineteenth century.

You walked straight into the living room. There was no hall or lobby. The very small room had a beamed ceiling coated with layers of whitewash. This ceiling was so low that an adult could easily reach it by stretching up a hand. As the room was lit by gas, whitewashing time came around frequently so it was easy to do without the aid of steps
In the two bedrooms we only had candles for lighting … No bathroom or hot water on tap either. Our hot water came from the boiler by the side of the fire. 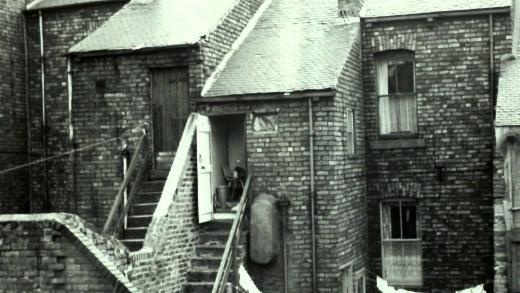 We had our baths in the old tin bath in front of the fire … We had an outside loo too, the horror of sitting there in the middle of winter wondering if a spider would plop onto our neck.
The house of Mrs Shaw the Saddler was much more grand, after all she was the landlady. She had a parlour. It smelt of apples and beeswax … Mrs Shaw’s washday was exiting to me. This was when she used the washing water to swill her backyard. She would heave the washtub to the back door, then swish the water down the steps in a foamy stream. Then she would put on a pair of pattens to keep her feet dry, and clomp around the yard swilling the water over every brick.
The place behind the saddler’s shop and cottages was always called ‘The Croft’; it stretched as far as Market Street. Mrs Shaw had a large garden and orchard. She kept fowls, free range, happy ones. Mrs Shaw’s daughter was a teacher.

Born in 1862, Mrs Shaw was widow Sarah (nee Smith) who was the second wife of saddler John Shaw and her only child was Mabel. They lived, then, at 91 South Street. John Shaw was the older son of Ralph, the saddler, and Jane. Let’s walk on to meet them.

The next shop and house was Shaw, the harness and saddle maker. I think he had a son and daughter.

(**James Drummond Skevington was born in 1823, married on November 17th 1847 to Mary Ann Straw, daughter of Joseph and Sarah (nee Bissell), and eventually left the town to set up as a lace manufacturer in Nottingham. In the 1880s he was trading with his son James junior as Skeavington & Son at Radford Boulevard Works, Outgang Lane in that city but both then returned to Ilkeston to continue the business at Number 3 Room of Kensington Works in Nottingham Road. In 1887 they were declared bankrupt, a result of a depression in their trade)

In March 1837 Jane Skevington married collar-maker/saddler Ralph Shaw who, as the eldest son of collar-maker John Shaw, had inherited his house, barn, workshop and croft when his father died in 1823. With his mother Mary (nee Whitcroft or Wheatcroft) Ralph was also granted an interest in John’s business.

There were at least six ‘Shaw’ children …..

— Maria Urana was the second wife of Exeter-born Beeston grocer Samuel Blasdale, whom she married in December 1876 when aged 39. Just over four years later she was a widow, continued to live in Beeston and spent the last years of her life at Fern House in High Road. She died in June 1912.

— Ann married Market Street cordwainer John Bates, son of leather cutter John and Mary (nee Mellor) in December 1861 but she too was prematurely widowed after five years and three children.
In September 1874, bachelor Joseph Potter, farmer of Kirk Hallam and ten years her senior, became Ann’s second husband, and six weeks after the wedding their daughter Elizabeth Ann was born.
Like her mother she was to work as a schoolmistress.

— Mary Ann lived with her parents in South Street, working as a dressmaker, until she married Alfred Fox Firth in March 1869. He was a National School teacher in Shipley, Yorkshire, and Mary Ann joined him there as a schoolmistress.

— A saddler like his father, John lived his life in South Street.
He married twice and had one daughter, Mabel, born in 1891 to his second wife Sarah (nee Smith), the daughter of Mount Street lacemaker and framesmith William Bennett and Hannah Eliza (nee Fox).
John died in May 1899, aged 55, and was buried in St. Mary’s churchyard with his first wife Jane who had died in 1886, aged 43.
Gap alert!  Who is Jane?  The 1881 census records her birthplace as Hereford.
John’s second wife died in South Street in February 1954, at number 91, aged 91, and still with daughter Mabel.

— Veranna lived unmarried with her mother in South Street but after the latter’s death moved into Stanton Road with her younger brother William.
She died at number 64 in September 1912 and was buried in the family vault in the churchyard of St. Mary’s where she was ‘a well-known church worker’.

— William’s domestic life mirrored closely that of his sister Veranna.
He traded as a butcher in South Street.

In November 1847 Jane’s illegitimate son James Drummond Skevington married Mary Ann Straw, the daughter of Bath Street framework knitter James and Sarah (nee Bissell). With their children they left Ilkeston in the 1860’s to live at Caroline Street in Nottingham, James working as a lacemaker.
In the 1880’s they returned to Ilkeston and James died at the home of his son Albert, at 84 Nottingham Road, in February 1890.

The Skevingtons had lived in this part of Ilkeston for many, many years. The area was known as ‘the Hays’…. for example, the Carrier family built houses on Extension Street, on their property there at the ‘South end of the Hayes’.

And so, it was, that close by the Shaws of South Street, in the early Victorian era, lived the Skevington family of  Henry and Mary (nee Morley).

In April of 1865 two of their sons — Henry junior and Solomon —  decided on an early morning visit to Ralph Shaw — without his knowledge or permission.
The pair broke into an outhouse on his premises, stole six fowls, and being in no hurry, stayed to milk his cow and take the six quarts of milk that resulted.
The stolen fowls were later found buried in Henry’s garden, some of the milk was in the possession of their mother and ’forensic evidence’ in the form of feathers was discovered on the clothes of the culprits …enough to convict the two sons and secure a six-month jail sentence for Solomon and four months for his older brother.

Solomon was a navvy who lived a wandering life – but he could get into trouble with the law wherever he roamed.
For example, in 1871 and shortly after his release from Derby County prison — where he was residing when the 1871 census was compiled — he was wandering on the Ashbourne Road at Derby at 4.30 on a summer morning, accompanied by a dog on a rope lead and carrying a bundle under his arm.
Stopped by PC Joseph Flanagan, Solomon revealed two rabbit skins in the bundle and was subsequently bundled off to the local police station for further investigation.
The dog was released to fend for itself.

Evidence from Solomon’s later appearance at Ilkeston Petty Sessions was inconclusive.
The dog was possibly stolen from furnace man Joseph Brewin, a neighbour of the Skevington family, but an identity parade was now impossible as the dog had disappeared.
The rabbit skins possibly previously clothed the bodies of two live animals belonging to another Skevington neighbour, farmer Henry Tomlinson, and which had likewise disappeared from the farmer’s yard shortly after Solomon was seen lurking there. Again positive identification was not possible and despite being instructed to attend court to give evidence, Henry Tomlinson did not bother to comply but chose to go to Little Hallam instead.
The magistrates were outraged at his conduct and had no option but to discharge the accused.
Perhaps farmer Tomlinson’s reluctance to pursue the case against Solomon was because he had formed a relationship with the latter’s mother, Mary Morley, when she was a spinster, and an illegitimate son was the result. (See Henry Tomlinson).

Solomon could also get into trouble with almost anyone.
In December 1874  an argument at the home of his brother Henry resulted in him damaging the door and breaking a window in a drunken rage. For which, at Heanor Petty Sessions, he was fined 40s, plus costs and 30s damages.

Solomon made his 18th appearance before the magistrates in July 1881, flanked in the dock by his mates Paul Bostock senior and Thomas Garrett. As usual there was no difficulty in convicting him. (see the family history of Pickburn the plumber)

Does it run in the family ?

Born in 1880, Henry junior’s grandson was David Skevington, and in April 1890 the lad was accused of stealing half-a-crown from his dad; he’d taken the money out of a drawer at home and then disappeared for a few days, only returning after he had spent all his loot. His parents could do nothing with him — he was a ‘little rascal’ — and repeatedly stole from them. The magistrates at Ilkeston Petty Sessions decided they would take at least one Skevington off the town’s streets for a while !! David was sent to jail for three weeks and to a reformatory for five years !!

In her 1931 article entitled ‘A pen picture of South Street in the late Fifties’ Adeline offers a slightly different order to the above buildings.
She lists two cottages between the toll house and Shaw’s saddlery, then Ralph Shaw’s house, then another cottage followed by the house of widow Hallam and cripple son.

Next we arrive at the House of York.