After the York household, Adeline recalls that “next was Robey’s Yard, with one or two cottages (now a funny-looking yard)” 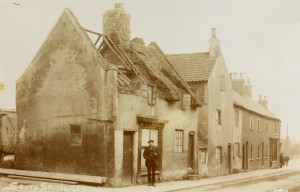 We are standing in South Street, looking at the entrance to Robey’s Yard on the left of the picture. (courtesy of Ilkeston Reference Library). The two thatched cottages were demolished in April 1914.

Robey’s – or Robey — Yard was previously known as Skevington’s – or Skeavington’s — Yard, where Christopher Harrison, hosier of Moors Bridge Lane, once had his workshop. He was married to Nanny Skevington, daughter of carpenter Henry and Catherine (nee Matthews) and the aunt of the fowl filchers and milk rustlers Henry and Solomon Skevington.

“Robey’s greengrocer’s shop was in front with a long flight of stairs over the shop door leading to a dwelling that went over the lower houses.
“Mrs. Robey was an invalid, a very delicate person.”

Born in Melbourne, Derbyshire in 1824, greengrocer and fruit dealer John Robey junior was the son of gardener John and Mary (nee Dunnicliff).
The family moved to the Nottingham area and by the late 1830’s were living in Basford.

John junior married Ilkeston-born Hannah Bower, eldest child of Little Hallam cattle dealer and farmer Gervis (Jarvis or Gervase) and Sarah (nee Bower) at Nottingham in November 1844.
And by 1850 the couple were living in Ilkeston when their son John Bower Robey was born.

In May 1874 John had gone to the Saturday market in the Market Place, expecting to set up his stall at his usual pitch, when he discovered that elderly Letitia Betts and her husband, selling their new potatoes, had got there before him. John was outraged and shouted instructions to his son —
“Run over the b*******” (substitute ‘boggers’?).
Thereupon their goods were overturned and ruined, Letitia was struck twice in the face by John causing her nose to bleed, and her bonnet and black dress were damaged in the fracas.
At least that was the story told by one party to the argument.
John’s account was slightly different.
Yes, he had been put out by the usurpation of his pitch and had tried to move the Betts couple along. They had retaliated by insulting his produce calling it ‘rubbish’ and calling him a thief. The husband had threatened him with a 4lb weight while Letitia had got hold of his coat and tried to throttle him. He had not struck her – her nose-bleed was caused accidentally by her own husband – John had simply pushed her away.
To the magistrates at the Petty Sessions, even that last act amounted to assault and the greengrocer was fined 5s and costs.
He paid up immediately.

In July 1880 John took a late Friday night ride in his pony and cart down to the Bull’s Head Inn in Little Hallam and there got into an argument with young brothers James and William Parks, who lived at Hallam Fields and worked at Stanton Iron Works. The two left the pub but when John followed shortly after he discovered that they had driven off in his cart!
The police were alerted and soon discovered the hijacked cart down the Nottingham Road, stationary and with a broken harness.
About midnight and further along the same road, at Trowell, one of the brothers was overtaken riding John’s exhausted and beaten pony. The other brother was nowhere to be seen, and nor were a long chain and horse rug, property of John and previously in the cart.
Charged with stealing the horse and cart, both brothers later found themselves in the lock-up, where their defence was:
a) that they were drunk and so not really sure of what they were doing,
and  b) that it was all John’s fault anyway because his argumentative nature had provoked them in the first place!
When their case reached Heanor Petty Sessions a couple of weeks later the case was dismissed, through insufficiency of evidence.

Having moved from Robey’s Yard into Nottingham Road (number 20), John Robey went missing on Saturday morning, January 6th 1883, and was found two days later in the Erewash Canal at Gallows Inn.
He had been married to his second wife for just over a year.
She was born Frances Lowe in Cossall, daughter of labourer Richard and Sarah (nee Wheatley) and was the widow of  John Hargreaves of Park Road.
The couple had gone to bed between 9 and 10 on Friday evening when a less than cheerful John was in poor health, having a very bad cough. He was in low spirits and had been so for about two weeks.
‘Trouble is coming’ he murmured prophetically before retiring to bed. Frances thought he might be referring to the debts he owed and the pressure he felt from this. She had had to give him money — £15 in all — which she had earned from her charring.
In the night John complained of back aches and rose about 5am, — earlier than usual — went downstairs, taking the candle with him and shortly thereafter the house door was noisily shut. Fanny called to her husband — ‘Robey? Robey?’ — but there was no answer. She went downstairs to find the candle put out, the door closed but unlocked, and John gone. His purse and 7s 9d lay on the kitchen table.
Son John Bower Robey was eventually alerted when his father had failed to meet his granddaughter as he had earlier arranged.
When there was no sign of his father by Saturday night son John became more uneasy, …  and became even more uneasy when his father’s hat was found in the canal the following day.  On Sunday night part of the canal was drained and about one o’clock on the Monday morning John’s body was discovered.
At the inquest into John’s death at the Horse and Groom Inn on Tuesday evening, Fanny voiced her disquiet about her husband’s mental state and this was confirmed by Edwin Trueman. The latter had spoken with John a couple of days before his disappearance and found him worried about his debts and an imminent appearance at court; he was in a low state, taciturn and not his usual jovial self.
John junior’s death was considered as a ‘possible suicide’ but as there was a lack of direct evidence to support this, the inquest jury returned a verdict of ‘Found drowned’.
He was aged 58.

“Their only son, John, helped his father. He married a Miss Fraser.”

The only child of John and Hannah was John Bower Robey, born in Ilkeston in August 1850. In July 1873 he married Caroline Frazer, the daughter of Bedford clothier William and Jane (nee Lincoln?).

John Bower died in July 1889, while then living in Nottingham Road, and in 1892 Caroline remarried to Edwin Ball (his third wife), lace factory foreman, son of South Street lacemaker Thomas and Frances (nee West) and brother of the Ball’s Yard Balls.

By 1890 it seems that the police were fed up with riotous behaviour in and around Robey Yard, which many of its residents claimed as a ‘private place’ where the police were not allowed entry and had no right to interfere. However — and correctly — to the police, it was a ‘public place’ and they had every right to attend disturbances there. Like the ‘drunk and disorderly’ brawl in September, involving Thomas Sudbury and William Robinson alias “Slap”. The latter made a pathetic plea at the Petty Sessions for mercy, explaining that he had ‘his old woman’ to care for; his missus was dying and he sat by her bed on ‘nightly vigils’ which were driving him ‘luny’ — he just couldn’t afford any more expense. Through tears, he described how he had been to view her burial plot the day before, and if they sent him to prison he would come out ‘to an empty home‘. The Police Superintendent didn’t particularly want to pursue the case, but wanted it clearly established that the Law had every right to interfere with rows in the Yard. The magistrates said that they had nothing to do with ‘the old woman‘, and the pair were fined. The magistrates also made it very clear that the authorities had every right to enter the Yard when they wished.

And so they continued to enter the Yard, often to deal with Thomas Sudbury, his family members and his ‘mates’. As in mid-November 1892.
Thus, on November 17th, several inhabitants of the Yard appeared at Ilkeston Petty Sessions. William Subury, son of Thomas, was in court, accused of assaulting his neighbour Mary Ann Jane O’Connell, who  kept a lodging house there, on two separate occasions. The latter appeared sporting a shiny black eye; she too was accused of assault by Hannah  Bostock, who sported a similar black eye. Thomas Sudbury’s wife Mary wasn’t left out; she was there both as a witness for Hannah and as a victim, who claimed that Mary Ann Jane had assaulted her too.
After much fruity language in court, meandering testimony and audience laughter, some fines were imposed, several of the charges were dismissed, and Mary Ann Jane O’Connell was carted off to prison for a couple of weeks, having refused to pay her fine.

We can rest here to peer into the burial grounds of the old Baptist Chapel and to consider the Baptist Chapels of Ilkeston in general.