After Adcock’s Yard, we pause to examine the Potter family.

As we set off on our journey around Ilkeston, it was pointed out that sections of Ilkeston’s population in the 1850’s were very closely linked. If we examine the members of the Potter family we can see an example of this interconnected relationship.

Brothers Samuel and Thomas Potter of the Ilkeston Baths were members of this extensive family of Ilkeston and Greasley (and elsewhere). Both had interests in coal — Samuel in Greasley, before his marriage, and Thomas, on Ilkeston Common, as well as his interest in farming and the wine trade.

Their father James Potter was born in Trowell and baptised there in August 1738, the son of Joseph and Mary (nee Dickinson).
At the time of his marriage — at Cotgrave on October 13th 1768, to Mary Richards — he was living at Ilkeston, a farmer and miller. Mary was probably the daughter of Samuel and Margaret Richards (nee James) of Cotgrave, and had been born in that place and baptised there on February 26th, 1750.

James was the principal legatee of Thomas Potter (1687-1765), his grandfather. You can read, below, a transcription of the will of Thomas in which James is mentioned on several occasions (kindly supplied by a contributor in New Zealand)

Probate and Will of Thomas Potter of Ilkeston who died 1765

*Crassart or Crassark Lane End (Line 4 below) may be Hassock Lane End.

Later, in 1773, James came into possession of a piece of land in Town Street, (Bath Street), later the site of the Poplar Inn plus the area between the Inn and what is now Pelham Street.
James died on May 11th, 1806, at Greasley, aged 69; his wife Mary had died there, in September 1797, aged 48.
At his death this Town Street property passed into the hands of his son, James junior, and thence to other members of the family. Eventually, in 1851, when in the possession of another James Potter (the nephew of James junior), it was sold to Francis Ebbern, a West Hallam farmer. At that time the site included a beerhouse and a brewery, as well as a dwelling, a stable and a garden. If you look on the 1851 census you will see that these premises were occupied by George Riley and Matthew Elliott, the later being listed as a ‘Beer House Keeper’.

James and Mary Potter had at least 11 children.

Their oldest child was daughter Mary, born at Ilkeston Mill, on the Erewash, in 1769 … we shall come back to her shortly (below).

James junior, born and baptised at Ilkeston on June 9th, 1771, was the oldest son and another ‘coal merchant’. With Sarah Phillips, he had two illegitimate children — Frederick Potter Phillips, born in August 1816 but who died in October of that year, aged 16 weeks, and Betty Phillips, baptised April 30th 1817.
James junior died in Ilkeston, aged 51, on September 24th 1822.

Elizabeth, born also at Ilkeston Mill, and baptised on April 23rd 1775, married Alexander Mellor Barker on April 18th 1801, and in nine years of marriage the couple had at least seven children ….
…. James Alexander (1801) who married Elizabeth Copeman of Blyborough, Lincolnshire, on April 4th 1826. They had three children before Elizabeth died at Ilkeston in 1834, aged 27. James Alexander then remarried, to Matilda Ball on January 1st 1841. There were at least six further children. James traded as a butcher in Ilkeston.
…. Elizabeth (1803) who married George Pickering, February 12th 1821, and thereafter lived and died at Eastwood.
…. John (1803), born at Trowell, married Sarah Smallwood on April 27th 1830, and raised six children, trading as an innkeeper, for most of the time at the Bridge Inn on Awsworth Road.
….Mary, who with a certain Thomas Potter, had her illegitimate son John Potter Barker about 1834, The son died in Greasley in 1854, several years after his parents.
…. twins Ann Mellor and Henry Mellor (1807), and Emanuel (1810) all died in infancy.

Elizabeth Barker (nee Potter) died in October 1810 and three years later her widower married his second wife who was his dead wife’s elder sister, Mary (above). They married on December 11th 1813 at St. John the Evangelist Church, Westminster, where the groom declared himself as a bachelor !! A mistake ? Was it because Alexander was marrying his dead wife’s sister, a marriage which was, in law, forbidden ?
Mary died at Ilkeston on May 22nd 1825, aged 55, and this time it was ten years before Alexander married again, this time to Susannah (nee Child) born in Oxton, Nottinghamshire, in 1789 (— she had been married twice previously, to framework knitter William Bennett, who was the widower of Susannah’s sister Elizabeth, and then to cattle dealer William Bower, the latter dying at Trowell, in March 1827, aged 70)

Thomas the Second was born in Ilkeston and baptised there on December 17th 1778. On October 19th 1814, at Lowdham, he married Elizabeth East, sister of Sarah, later the wife of his brother Samuel. In the will of his father, Thomas was bequeathed the’brick wind mill’ in Lawn Close, and he later traded as a coal master and liquor merchant in Ilkeston and subsequently as a farmer in Cotmanhay.
Thomas died at Cotmanhay on September 13th 1849 and his wife on June 22nd 1850.
There were at least seven children, one of whom — John Potter (1828) — married his cousin Ann (daughter of George Potter)

George Potter was baptised in Ilkeston on November 4th 1783. Also a farmer and liquor merchant, he married Ann East, elder sister of Elizabeth and Sarah, on January 1st 1811, at Lowdham.

There were at least seven children of this marriage though three of them died in infancy. Samuel (1811) was the oldest and he married Elizabeth Bailey of Saxilby, Lincolnshire on July 18th 1845. He was a farmer in the Mansfield area for the rest of his life.
Son Francis (1821) married Mary Ann Newton Blount, October 3rd 1848, at Ilkeston, and thereafter spent some time in London, Lincolnshire, Ilkeston (Awsworth Road), before the family finally settled in Nottingham.
Daughter Ann (abt 1823) married her cousin John Potter, son of Thomas and Elizabeth … thus her father and father-in-law were brothers while her mother and mother-in-law were sisters.
And youngest child Mary (1825) married George Potter at Christ Church, Cotmanhay, on April 15th 1858. He was the son of Lincolnshire famer James and Maria (Copeman); his mother was the sister of Elizabeth Copeman who was the first wife of James Alexander Barker, mentioned above.

Henry Potter was born in 1787 and died in the following year. And Ann Potter (1791) was also only a few months old when she died.

Henry Potter the second was baptised on April 7th 1793 and buried on April 11th.

(To be continued … possibly) 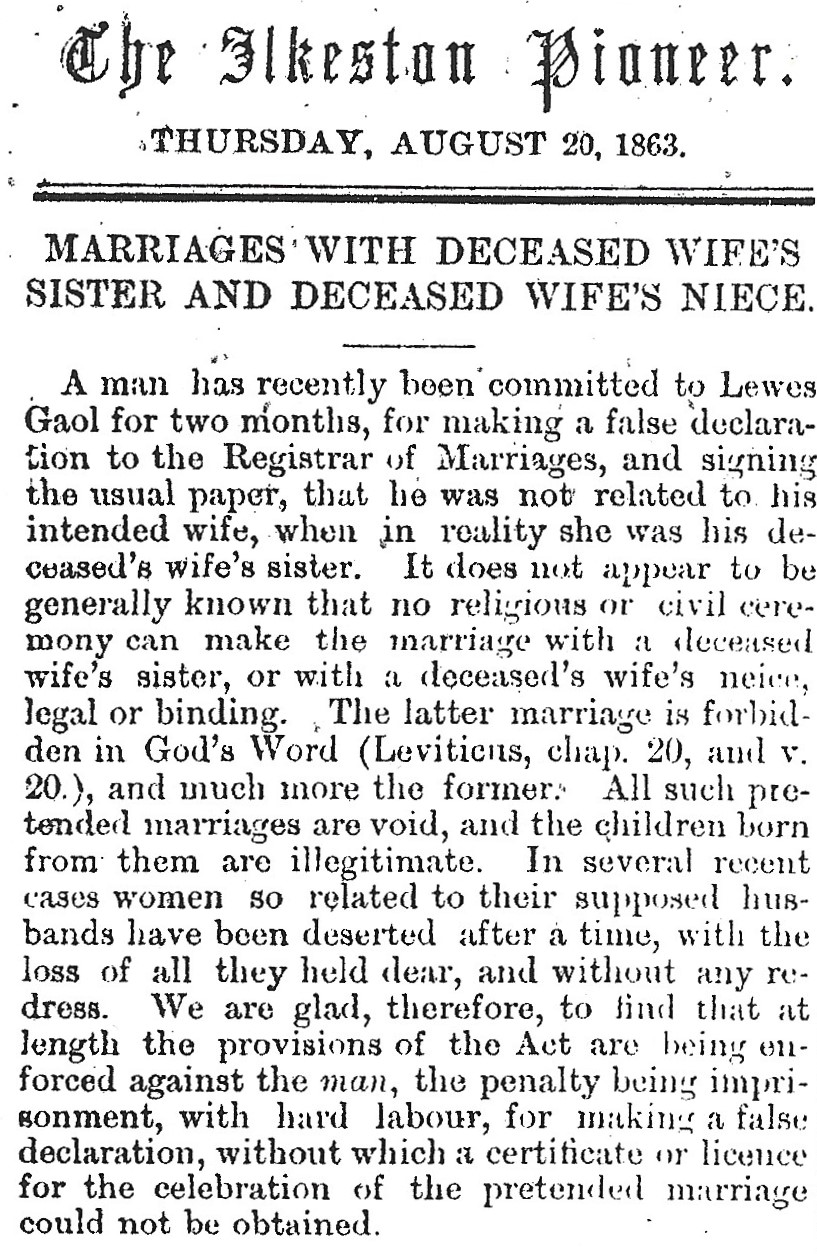 These were drawn up by the Church of England in 1560.

This reminder (left) came too late for Alexander Mellor Barker (above).

Fortunately there were no children from his second marriage.

But he wasn’t the only man in Ilkeston to commit this ‘offence’.

Can you find others ?

The 1907 Marriages Act removed the dead wife’s sister from the list.