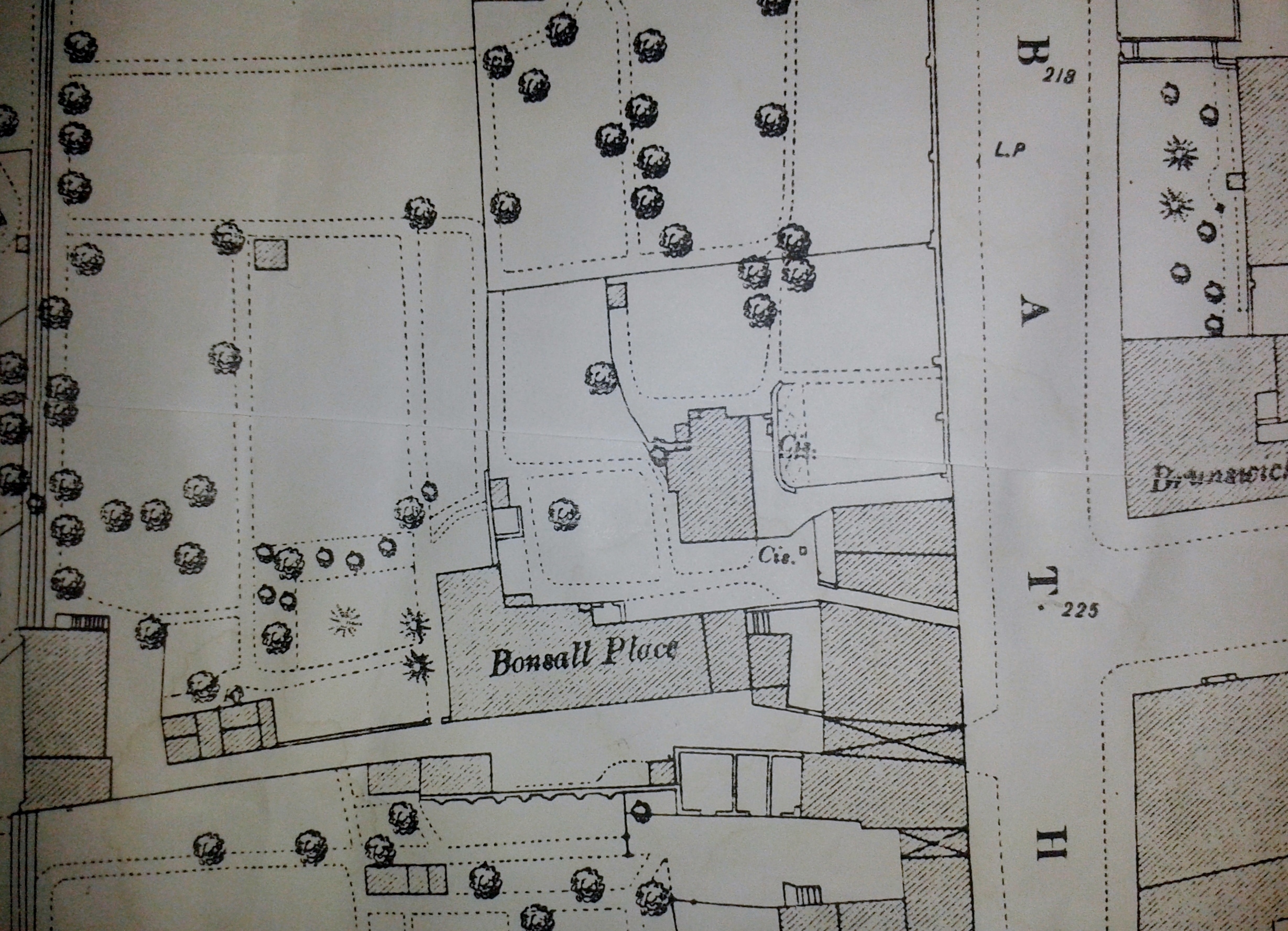 Walking north, down Bath Street towards Cotmanhay, the entrance to Adcock’s Yard (Bonsall Place) is on the left.
Opposite, on the other side of Bath Street, is the Brunswick Hotel at the corner of Wilton Place.
Just off the top of the map is the Poplar Inn which we will come to shortly.

“In (Adcock’s Yard) were two houses. Sydney Adcock lived in one. (His brother at one time lived in the other)” … Adeline remembers.

“At his death the property was sold to Mr. William (should be James?) Bonsall, pit contractor,
…. and I remember that the occupants did not want to leave the houses, and force had to be used to get them out.”

John Adcock senior died in Ilkeston from bronchitis in February 1864, aged 64. It was wife Ann (nee Bark) who sold it at the end of 1866.

The origin of the property dispute mentioned by Adeline arose in December 1866 when contractor James Bonsall, then living in Queen Street, bought the properties in Adcock’s Yard at public auction. He acquired the title deeds but did not take immediate possession of the premises, and paid Ann Adcock, John’s widow, £5 to vacate her house —  or so he said.
Ann’s sons, Thomas and John junior, disputed the legality of the sale, and with their brother-in-law, journeyman joiner William Cragg – who had married Emma Adcock in May of 1865 — they decided to squat in some of the yard’s houses. This required a little bit of ‘breaking and entering’.
Contractor James Bonsall was having none of this, obtained a warrant for ‘the forcible ejectment’ of the squatters and prosecuted them at Ilkeston Petty Sessions in November 1867.
The accused trio initially pleaded ‘not guilty’, though James was in a forgiving mood — he would not pursue his prosecution if they would ‘deliver up peaceable possession’ to him.
This offer was rejected at which point the magistrates emphasised the serious nature of the offence and threatened committal to trial. This was adjourned for a fortnight, perhaps to allow some sober reflection, while the police were ordered to execute the warrant.

In late November 1867 Ann Adcock felt compelled to write to the Pioneer …
“I beg to deny the statement … made by or on behalf of James Bonsall, of Ilkeston, saying that he had paid me £5 to leave the property. I have never received any money whatever, not even five pence, from him”.    So there!!
Despite Ann’s resolute opposition, the dispute was settled in James’s favour. The Adcocks moved out and the Bonsalls moved in .. and the yard was ‘rechristened’ Bonsall’s Yard. 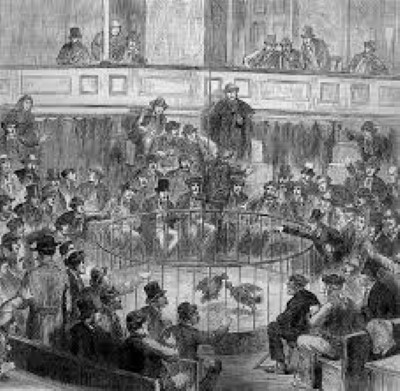 The Cruelty to Animals Acts of 1835 and 1849 had outlawed cock-fighting but despite fines it did persist, especially in coal-mining areas.
Thus, under the heading of “Cocking – Town against County of Derby”, the Nottinghamshire Guardian (August 1850) reported on ‘battles’ held at Sidney’s Cockpit in Ilkeston. This was the third in a series of such contests held between the breeders of Town who pitted ‘duns and birchins’ against the County who brought mostly ‘pyles’. (All types of fighting cocks).
In this particular contest there were nine battles in the ‘main’ (match) and ‘heavy sums’ of money changed hands.
The County won by one battle.

John Cartwright recalled a meeting with Big Ben Caunt, bare-knuckle Champion of England of the late 1830’s and early 1840’s, when the latter had cause to leap over John who was playing ‘ring taw’ — a marbles game — on the Bath Street footpath with his friend Henry McDonald.
“I gazed on that fine muscular form and on the scarred features, and the picture has never been erased from my memory”.
Not surprising!  How often is it that a champion of England — ex or otherwise — plays leap-frog with a lad as he plays with his mate?
John goes on to say that ‘Big Ben’ was on his way to witness a cockfight at Adcock’s public house. 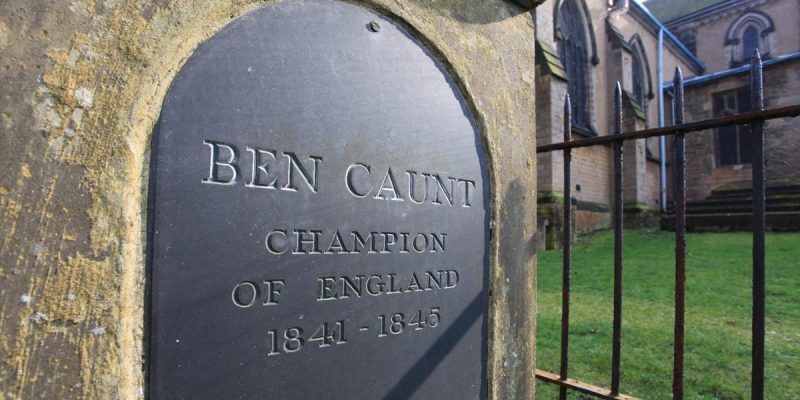 He was a big man with a big chest, a booming voice and an international career in bare-knuckle boxing. ‘Big Ben’ Caunt’s name has lived on since he was finally laid out, in St. Mary Magdalene’s churchyard.

He found fame and a close rival from nearby Nottingham, Bendigo William Thompson. Like Ali and Frasier in the 20th century, ‘Big Ben’ and Bendigo would meet three times and share the title between them. But for Ben there were no gloves and no time limit; and each meeting was a ding-dong battle. Their first bout in 1836 lasted 22 rounds with Bendigo the winner, ‘Big Ben’ got his revenge in 1838 but this time it took 76 rounds; finally losing in 1845 over 96 rounds.

In between these grudge matches ‘Big Ben’ defended his title in London and toured the USA. In retirement he became a pub landlord in London. Towards the end of his life, tragedy struck when a fire at the pub claimed the lives of his two children. Martha and Cornelius now rest with Ben in the north side of the churchyard.

His fame was such that ‘Big Ben’ became a by-word for anything big and loud. One possible origin for the name of the most famous chiming bell in the world. When Big Ben strikes it recalls ‘Big Ben’ in his pub calling ‘Time’.

You can find out more about Ben in church and visit his grave which sits in the shadow of the north transept. 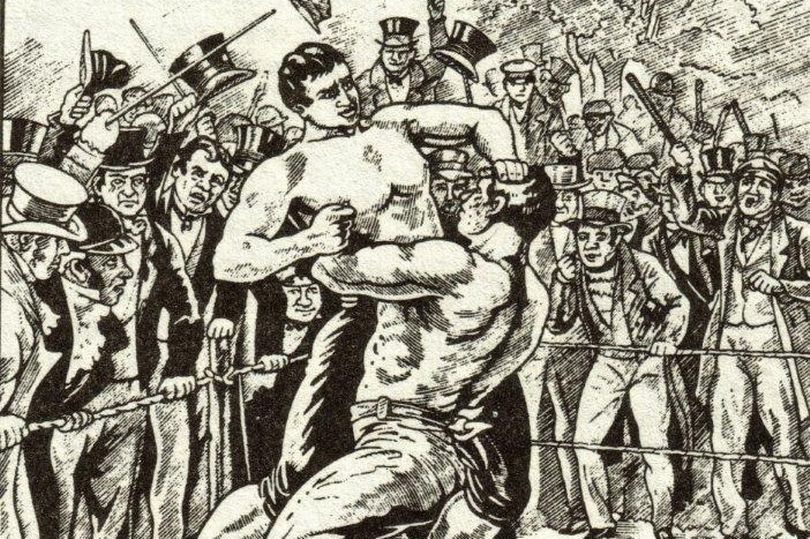 A typical bare knuckle fight where any tactic was allowed. This illustration, from ex-booth boxer Dick Johnson’s 1987 book Bare Fist Fighters, represents one of the fights between local heroes Bendigo and Ben Caunt

In January 1885, the Globe newspaper (and many others) reported on a prize fight at Mapperley near Nottingham, between  Samuel Hickman of Bulwell, and Thomas Brewin of Ilkeston. The former was a 50-year-old, 14-stone, seasoned pugilist while Thomas, aged 31 and weighing two stones less, was making his début. The fight took place before an audience of about 30 spectators, lasted 28 rounds and about one hour — “both were severely punished” and Thomas emerged victorious when Samuel ‘threw up the sponge’. This is how most reports viewed the result though the Sportsman wrote that the veteran had been declared the winner !!
P.S. There was no interference on the part of the police.

Various directories from 1842 to 1850 list an unnamed beerhouse in Bath Street run by John Adcock.

The Nottinghamshire Guardian reported in January 1874 that Sydney Adcock of Crichley Street was working as a ‘holer’ at one of the pits owned by Messrs. Barber and Walker near Shipley Gate Station, Eastwood when a quantity of coal fell on his head and upper body.
He was dead almost immediately and ‘five children’ were left orphaned as a consequence.
This was in fact collier John Adcock junior who died of a fractured skull caused by a fall of coal on January 12th 1874.
He had married Olive Clark in 1858, spent some time thereafter in Hoyland, Yorkshire, before returning to live in Crichley Street in the late 1860’s.
Olive died in Crichley Street in January 1873, a few days after giving birth to their daughter Olive Clark Adcock, who then died three months later.
The Ilkeston Telegraph reported that six children were left orphaned when John junior died — I believe that there may have been only four.

And thus Bonsall Place makes its appearance on the map of Ilkeston – opposite Wilton Place — when James Bonsall the pit contractor ‘annexed’ Adcock’s Yard in 1867.

James’s second wife Mary (nee Tooth) died at their Bath Street home in November 1885 – she was the half-sister of George Tooth, currier of Bath Street.
James Bonsall died at Bath House in Bath Street in December 1893 aged 75, at the home of his daughter Amelia who was by then married to baker and confectioner Thomas Adlington.

James had acquired the New Inn premises in 1873, and on his death in 1893 the inn was bequeathed to his son Walter, along with a cottage and property to the rear of the inn. Adjoining the same inn were three premises in Bath Street, also owned by James, which he left to his daughter Hannah, now the wife of Frederic Hodgson. All of this can be seen in the plan below which was attached to a Conveyance Agreement of February 4th 1899 (courtesy of the Jim Beardsley Archive) 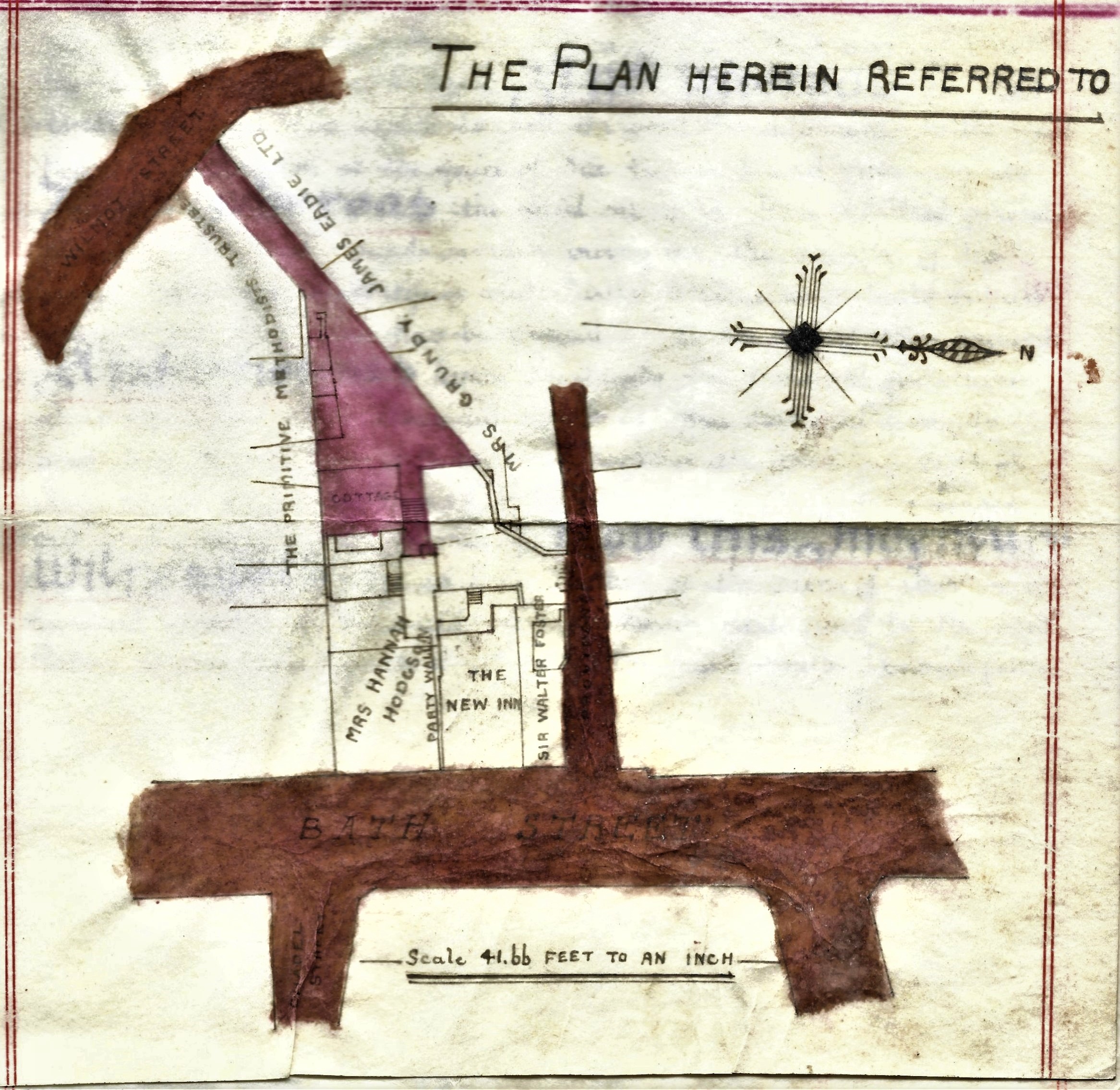 You can find more detail of James’s other property here

My thanks to John Daykin for this press clip.

Amelia's Marriage
From the Derby Mercury of Wednesday 28th July 1886. “On Tuesday, the wedding of Mr. Thomas Adlington, and Amelia, daughter of Mr. James Bonsall, colliery proprietor, Ilkeston, was celebrated in a manner which attracted much attention. The wedding was solemnised at the Parish Church, Ilkeston, before the Rev. J. F. N. Eyre LLD. Vicar. The bridal party were driven to church in carriages with postilions clad in scarlet - quite a novel sight in Ilkeston. The gifts to the bride were very numerous. Mr. and Mrs. Adlington left for London to spend the honeymoon. The bride’s dress was made of fawn Ottoman silk, trimmed with lace and orange blossoms, and she wore a diamond bracelet, the gift of the bridegroom. The bridesmaids were Miss Adlington (Ollerton), Miss Rowley (Derby), Misses Edith, Jessie, and Lizzie Daykin, each of whom wore a gold brooch, the gift of the bridegroom. The bells of the Parish Church rang joyous peals at intervals during the day”...

As we walk northwards along Bath Street (just off the north of the above map) we come to a site associated with the influential Potter family of Ilkeston.