After the draper’s shop  Adeline leads us to …….

“Mr Woolstan Marshall who had the next shop, as acorn dealer and seedsman. The shop had two small bow windows.”
This was 6 Market Place.

Sheddie Kyme remembers the ‘roundly-bowed windows, the panes of which were the small cottage pattern in vogue at that time’. 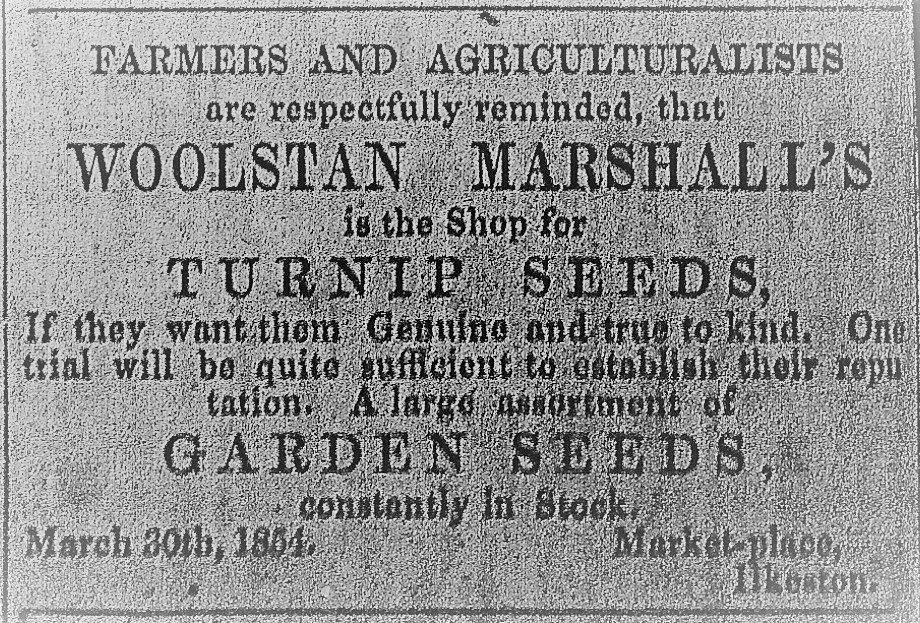 In the 1840’s the Marshall premises adjoined the King’s Head and were occupied by grocer Thomas, his wife Catherine, and their children.
When Thomas died in August 1845, son Woolstan continued the grocery business while his younger brother Robert sold meat to go with the ‘veg.’ He later moved into South Street to set up his own butcher’s shop there.

In 1851 Woolstan made a visit to the Great Exhibition in London with friend Ezekiel Bailey, both in their twenties. 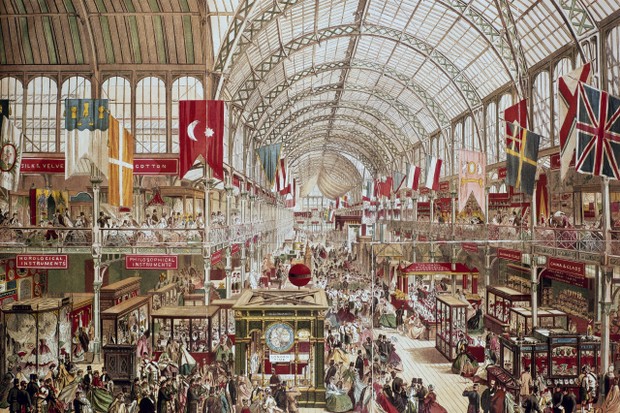 “On arrival in London they went to a shop to get a cigar. It so happened that each put down half-a-crown. Not receiving any change they made bold to ask for it.
“But the young lady who waited upon them politely informed them, ‘Times changed, faces changed, and all things changed, but they’d get no change from her’”. (Enquirer. 1892).

In 1857 Woolstan Marshall’s garden in the Market Place was raided by a thief, who took 25 gooseberry and currant trees. Woolstan was driven to exclaim that if he could catch the culprit he would ensure that “he would not have borne the sight of either gooseberry or currant dumplings for the remainder of his life”.

In 1859 Woolstan married Ann Barker, elder daughter of John Barker, the proprietor of the Bridge Inn premises on Awsworth Road, and Sarah (nee Smallwood), and the couple then lived next to Woolstan’s mother in the Market Place.

Woolstan and John Wombell, proprietor of the Ilkeston Pioneer, met in controversial and disputed circumstances during one October evening in 1861 at the Market Tavern.
John claimed to have seen an intoxicated Woolstan staggering around the Market Place, visiting the Market Tavern and Harrow Inn, and eventually being helped home by Joseph Aldred, landlord of the Harrow. At one point during these perambulations — at the Market Tavern — Woolstan had entered into an argument with John and had thrown liquor of an unspecified nature into the latter’s eyes, inciting John to retaliate by punching Woolstan.
The two sued each other and met in court with John conducting his own case – as usual!!
He presented his case first and called several witnesses who all appeared not to have read his script. None of them could confirm Woolstan being drunk and before John could make a statement, the Judge, perhaps running out of patience, dismissed the case against the grocer, (a case which was not reported in the Pioneer).

At the beginning of 1862 Woolstan was discharged from his bankruptcy of the previous year.

In late 1863 Woolstan and his wife Ann were separated, the latter and their daughter, two year old Catherine Sarah, going to live with her parents at the Bridge Inn on Awsworth Road.
At this time Woolstan had been having ‘financial difficulties’ for almost two years and this appears to have been when marital difficulties had begun. There were suggestions that Woolstan was drinking heavily at times and ill-using his wife.
Perhaps to escape temporarily from his problems, Woolstan went out for a day’s fishing in July 1864 — but returned to find even more problems. His house had been pillaged, nearly cleared of everything that was in it….or so he claimed.  He was granted a search warrant and then, possibly acting on information from his mother, went to the Bridge Inn where the ‘stolen’ items were discovered.
As a consequence, his sister-in-law Sarah Barker, hostler Charles Turton and moulder Silas Spencer made guest appearances at Ilkeston Petty Sessions charged with theft.
It was claimed that Sarah had accompanied her sister Ann to the Market Place home, had wrapped up a quantity of possessions in a sheet and handed them over to the two male accused who took them away to the Awsworth Road inn — though there was no suggestion that the ‘respectable’ innkeeper John Barker was a receiver of stolen goods. Much of this was witnessed by Woolstan’s mother Catherine who gave evidence in the case. However it was conceded that many of the items had belonged to Ann before her marriage while the ownership of others was disputed. And how could Woolstan prove that the ‘recovered’ goods had ever been in his house at all?
The magistrates were persuaded. They discharged the defendants, and ordered the goods to be returned to the Bridge Inn. Mr Heath, solicitor for the defence, requested the police to ’use every precaution in taking the goods to Mr. Barker’s house, as he was afraid of a breach of the peace’.

Woolstan seems to have given up the business about 1867 and moved into Awsworth Road.
His Market Place premises were put up for sale in July 1867 and purchased by John Wombell.

In 1871 Woolstan was living in Awsworth Road with his sister Mary, wife of Edwin Wragg — and who herself had had marital problems.

By 1872 Woolstan was pleading poverty.
He was being chased by solicitor Michael Jessop of Crich over an unpaid bill. In court he argued that it was all most unfair, and he couldn’t pay the bill as he wasn’t employed, that he was living off his friends, and had only got a shilling or two from any part-time work that anyone would employ him to do — such as auctioneer Frederick Paling, when his pay depended upon the number of sales he made.
The deputy Judge took pity on Woolstan and allowed him to pay in instalments, 10s per month (defendant remarking that he would not comply with the order).

In November 1874, still separated from her husband Woolstan and still living at the Bridge Inn, Ann was found dead in her bedroom, aged 42. Daughter Catherine Sarah remained living with her maternal grandfather. 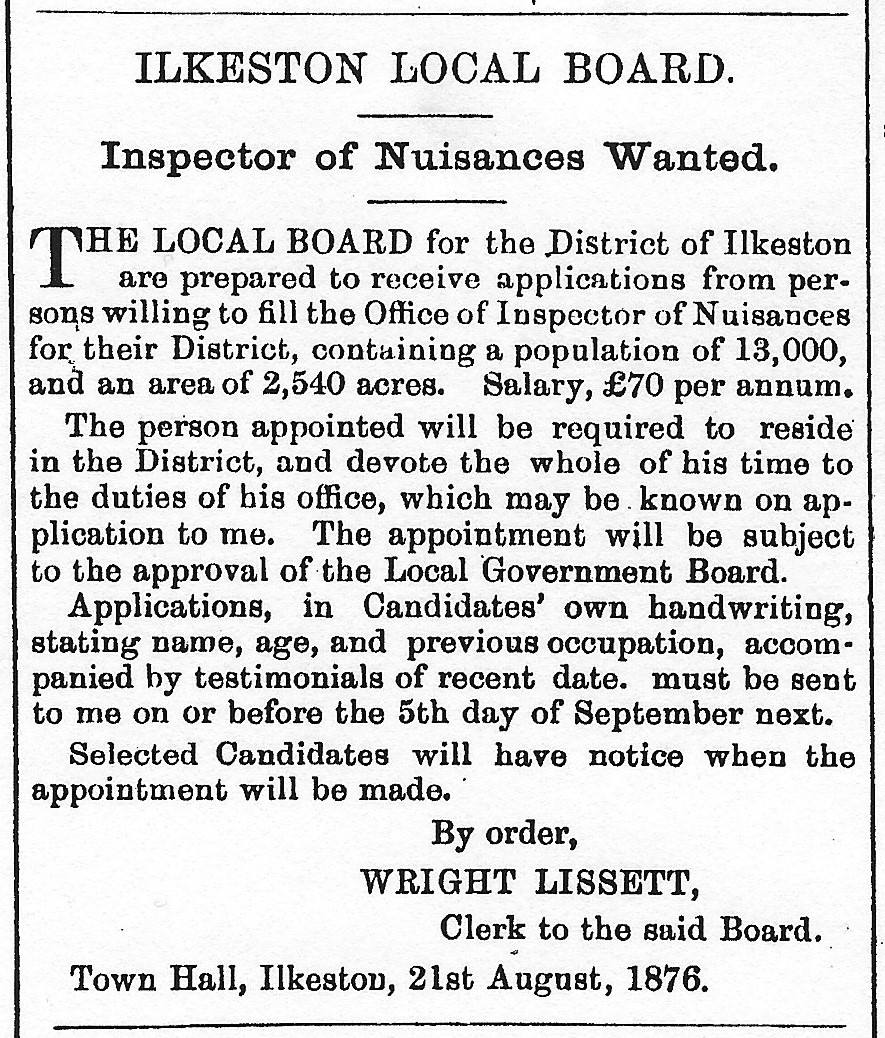 In September 1876 Woolstan was appointed as Inspector of Nuisances for the Local Board, at an annual salary of £70, replacing William Campbell.
He had unsuccessfully applied for the same post in 1874 when it was awarded to William Bickley of Lenton for one year at a salary of £60 pa.
Woolstan’s appointment was initially opposed by the Local Government Board at Whitehall, which noted that Woolstan “has been a grocer and accountant and ….has not had any experience of the duties which will devolve upon him as Inspector of Nuisances”. This made him an unsuitable candidate for such an important post.
Not overawed however, the Ilkeston’s Local Board replied that Woolstan had acted most satisfactorily as Assistant Inspector at the time of the smallpox epidemic of 1872 and it therefore confirmed his appointment.
However, by the following year Woolstan was writing to the same Board; “I beg to tender my resignation as Sanitary Inspector. It appears that there is some undercurrent at work detrimental to me. Compare my services with the previous…you will find a great difference and that in my favour”.
The Board accepted his resignation and Woolstan was replaced in July 1877 by Charles Haslam, framesmith and cottager of Gladstone Street, and former member of the now defunct Highway Board.
As usual the Pioneer lost no opportunity to throw a few criticisms towards the Local Board over this appointment. It claimed that Charles was almost 63 years old and the newspaper was questioning whether it was wise to employ someone at such an advanced age for such a demanding post. Nothing personal though !!
And “No one can blame Mr. Haslam for seeking a post to which restriction as to age was not conditional, (the omission of the Board in this respect being characteristic of its conduct over this Surveyorship for some time past) and, providing the Local Government Board confirm his election, every Ilkestonian must hope that what he lacks in youthful vigour is amply atoned for by other and equally important qualifications”.

Charles’s age did not prevent him being re-appointed as Inspector of Nuisances for several years thereafter.

In November 1878 Woolstan broke a leg as he slipped off a kerbstone and was admitted to Nottingham General Hospital for treatment until, as his condition improved, he was allowed to leave.
On Friday morning, December 20th, he returned to the hospital and was waiting in the out-patients room to have the leg dressed when he collapsed and died almost immediately. A post mortem examination at the hospital revealed that the leg injury was not connected at all to the death which was due to ‘fatty degeneration of the heart’.
Woolstan was 53 years old.

“After Woolstan gave up his business in the Market Place, Mr. John Wombell bought the property. (Mr. Wombell) took out the bow windows, modernised the shop, and then removed into it.”

In August 1867  John Wombell, the editor and publisher of the Ilkeston Pioneer, purchased these premises next to William Smith — they were two doors nearer the Town Hall than his present offices. He moved there in October, and immediately began to make ‘improvements’. He pulled down the pigsties, hen-roosts and cow houses which he found there, made alterations to existing premises and erected a building to house the two horse-power steam engine driving his printing press, which was installed about May of 1868.

‘Lawsuit: a machine which you go into as a pig and come out as a sausage’. (Ambrose Bierce)

This activity was not appreciated by John’s neighbour and master draper, William Smith, who soon complained of the noise, vibration, smoke and sulphurous smell caused by the engine. In addition, the new building work had blocked out his light such that he had to light the gas an hour earlier than usual. The smell and noise of John’s activities had seriously affected William’s chest, his sleep, his breathing and his linen laundry — the cleanliness of which was in danger every time it was hung out in the yard. The complaints resulted in an approach to the Local Board and eventually the case appeared at Ilkeston County Court in February 1869.

William called several not disinterested witnesses to support his claims — his friends, his workmen, his servant, tenants of three adjoining cottages owned by him, and other neighbours.

John was not to be outdone and vigorously defended his actions and his steam engine, calling forth several of his own ‘expert’ witnesses — including an array of architects, builders, engineers and surveyors — to show that not only had he not caused a nuisance but that he had actually improved William’s premises!! The steam engine was at work only on Wednesday to print the weekly Pioneer, did not vibrate, and from a distance of three yards a blind person would be uncertain whether it was working or not. Further it was claimed that William’s own cesspit and untrapped sewer drains were more likely to be the cause of the local odours.

The judge eventually decided that only one of William’s complaints could be upheld and then only partially; no damages were awarded and each party had to pay costs.

The case was extensively reviewed in the Pioneer which had employed a ‘most expert professional shorthand writer’ to ensure that the trial details were recorded with ‘perfect accuracy’ as the affair had aroused great ‘local interest’. The question at issue was of great import to all ‘proprietors of machinery worked by steam power’.

Rival newspaper the Ilkeston and Erewash Valley Telegraph covered the case in a little over one column. (This newspaper first appeared in Ilkeston about March 1868)