after The Allcock sisters we come to ….

The Queen’s Head Inn, was an old house and stood back on the top of a long slope. Its rooms were low and dark.

This was 103 Bath Street in 1871 and 1881. As you look at the map below you will see how the Inn stood back from the road, and note the location of Bostock’s Row … the significance of this to be explained on the next page. 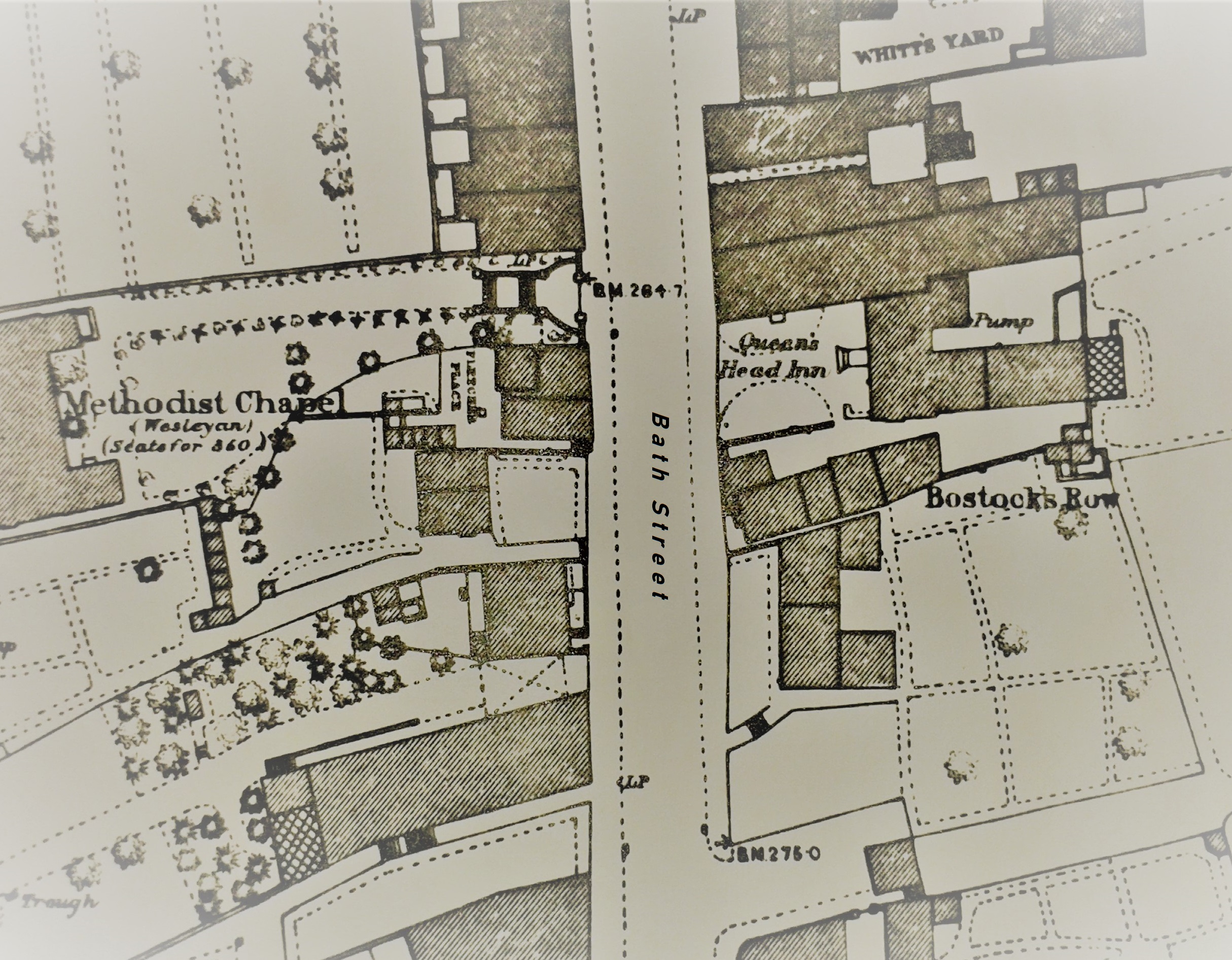 The landlord of the Queen’s Head before Aaron Aldred was Ilkeston builder Benjamin Wade who ceased his tenure there about 1843.
In the previous year he found himself in the criminal court at Derby, flanked by two of his sons, Robert and George, charged with the manslaughter of cordwainer James Smith of Chapel Street in October 1841.
A drunken James had been involved in a fight at the inn and had been thrown out into the street. Resulting injuries may have caused his death the following day, but the case against the Wades was not strong and the trio were acquitted.
James Smith was the first cousin once removed of Joseph Smith whose murder occurred almost 20 years later and a few doors away.

Benjamin Wade was the son of builder/mason Robert and Mary (nee Milward) … Robert being the builder responsible for the houses in Flinders’ Row, just round the corner in Chapel Street. Benjamin was married to Mary Haseldine of Cossall in August 1805 and their eldest child Ann was baptised in January 1806, while a younger son, George, was born in 1818. Both these Wade children are mentioned in a letter written by John Cartwright in 1893 (IP).

“Brother John Ross, grocer and local preacher” is correctly described as “a gentleman by nature, and as a great Radical orator”. He was a clever, many-sided man, who could turn his hand to many things; and late in life he embraced the profession of auctioneer, and practised it in Nottingham. He married Miss (Ann) Wade, sister to Mr. George Wade, who died at another sister’s (Mary’s) residence in Ilkeston (at 161 Station Road) only two or three weeks since, and respecting whose successful carrer in Sheffield you published an interesting paragraph at the time. I well remember Mr. George Wade’s occasional visits to his native t0wn when I was a lad, and can vividly call to mind his appearance in those far away days.

Mr. George Wade, formerly a well-known builder and contractor in Sheffield, died on Saturday (May 6th) at Ilkeston. After giving up business in Sheffield he went to reside at Southport, where his wife died two or three years ago. He was shortly afterwards seized with paralysis, and has since then been in failing health. Mr. Wade came here upwards of fifty years ago, and soon succeeded in taking a prominent position in the building trade. Amongst the work he did was the erection of the new banqueting room at the Cutlers’ Hall, the Norfolk Drill Hall, the brick work of the Norfolk Market Hall and the Victoria Station, the Roman Catholic Schools in Queen’s-road, and the offices of the then Water Company in Division-street. He was largely employed upon work for the Duke of Norfolk. Mr. Wade, who was in his 79th year, had no family. Madam Vadini, a lady known upon the operatic stage, was his adopted daughter (Emily Wade)

The adopted daughter ‘Madame Vadini’ was born Emily Whitaker in 1860 in Sheffield, the daughter of John Johnson Whitaker and his wife Mary (Bradbury), who died shortly after the birth. John Johnson Whitaker then remarried, to Hannah Keeton in 1862; Hannah was the sister of Mary Keeton, who in 1853 had married George Wade.
John Johnson Whitaker died in the year following his second marriage, leaving wife Hannah with several children from his first marriage.

This is how Emily Whitaker became the adopted daughter of George and Mary Wade (nee Keeton) and adopted the name of Emily Whitaker Wade (alias Madame Vadini !!)

(After Benjamin) the landlord, who had one daughter and two sons, was Mr. Aaron Aldred.

Brinsley-born Aaron Aldred was a son of collier Samuel and Mary (nee Ottewell), one of their at least ten children, and came to the Queen‘s Head Inn about 1843, taking over from Benjamin Wade. His first wife was Maria Potter whom he married in April 1836 and with whom he had six children. She died in August 1850 and six months later Aaron married Catherine Forman who bore him two further sons, Aaron junior and Arthur.

At the end of October in 1854 horse-breaker Charles Hampson popped into the Queen’s Head to call on a friend. He was persuaded to stay and became engaged in a competitive game or two of bagatelle, at the end of which he was three quarts of ale better off. Other customers, perhaps sore losers, objected to Charles downing his winnings and a jug of ale was subsequently propelled in his direction, missed its target and broke a screen. The commotion alerted landlord Aaron who intervened and seems to have impounded Charles’ hat as payment for the damage which he blamed on the horse-breaker. His actions however landed Aaron in court where he was fined for assaulting Charles and breaking the brim of his hat. Not only that but in a follow-up case he was fined for allowing gaming on his premises, contrary to his licence. Aaron didn’t realise that merely playing for ale was equivalent to gaming and for this ignorance his fine was reduced.

The children of Aaron Aldred

Angelina was the eldest daughter, born in June 1839 and who, in August 1856 married brewer William Barker, later to be the keeper of the Commercial Inn on Awsworth Road. Angelina died there in January 1874.

Aaron, the eldest son, married Sabina, third daughter of John Gregory, pit contractor, Burr Lane.
Aaron junior married Sabina Gregory, the fourth daughter of Burr Lane ironstone contractor John and Ann (nee Parkin) in October 1875. The couple lived at the Inn — where ‘junior’ was to replace ‘senior’ as landlord in July 1881 — but their marriage was not a happy one.
About six months after the marriage Aaron junior began to physically abuse Sabina and this cruelty continued for several years, during which time six children were born though none lived beyond infancy. The wife was constantly verbally assaulted, was knocked to the ground, partially strangled, doused with water, struck in the face, had whiskey thrown in her eyes, and was locked out of the house.
In Aaron’s eyes however, his wife was no angel and he charged that she was often ‘beastly drunk’, openly used bad language, and was very belligerent.
In 1882 Sabina discovered her husband’s adultery with a barmaid — though he didn’t try hard to conceal it — and shortly after she petitioned for a dissolution of her marriage. The suit was undefended and the petition granted in the Probate and Divorce Division of the High Court of Justice in June 1883.
The 1891 census shows Sabina now using her maiden name and living with her widowed mother in North Street.

And few months later — and without waiting for the plans to be approved by the Local Board — John began his ‘improvements’.
Discretely sheltered behind a new wall, a urinal and ashpit in front of the inn and facing out towards Bath Street were erected without authoritative approval — though ‘the Board did not feel inclined to assert its power’ and order him to pull it down. This would be just a few years after the map at the top pof the page was drawn — I leave you to work out where the ‘improvements’ would be positioned !!
John described his addition as ‘a storeroom’!! ‘For the sake of gratifying curiosity the Highways Committee might .. take a look in and let us know what kind of ‘stores’ are kept in this potential nuisance’. (IA Oct 1883)

Wright’s Directory of 1885 shows the Inn occupied by William Vincent Barnett but in 1885 it was transferred to George B. Marples. In February 1886 the Inn was advertised as ‘to let’, recently enlarged and improved. By 1888 John Trueman was there.

And here is the site in later years …. 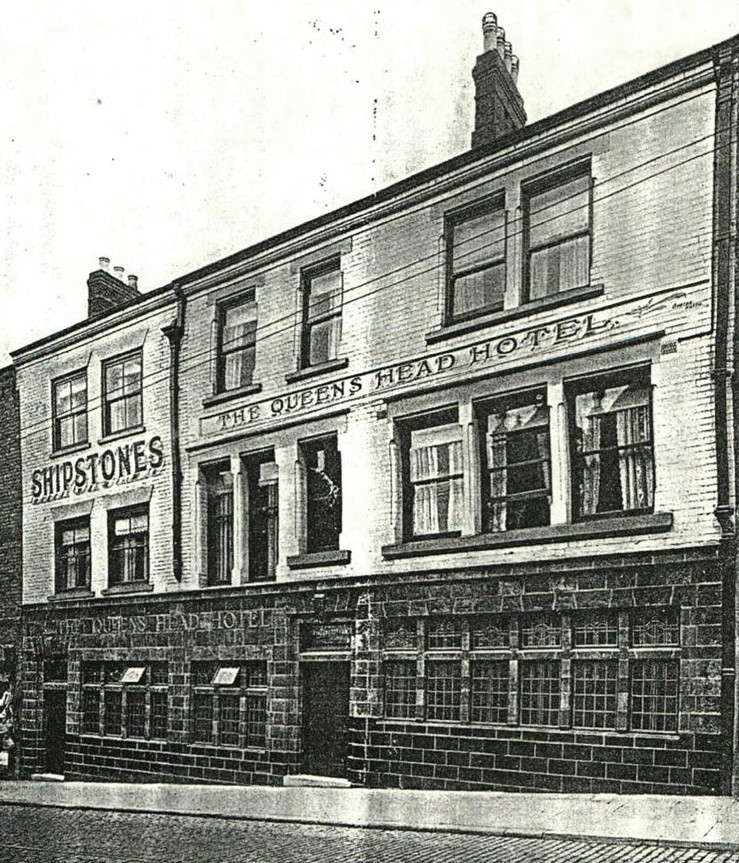 Next came Bostock’s Row and the rowing Bostocks were the nemeses of landlord Aaron.