We leave behind London House  and then Adeline describes what we next come to ….

“two very old tall (three-storey) houses; these were built level with the road but back from the street and had tiny gardens in front of them but the flowers faded away and nothing was left but the soil and bricks around.
“Before (we come to) the Queen’s Head, was the three-storey house of Maria and Bessie Allcock which at one time had been the Post Office. The parlour was used for a straw bonnet shop.
“Bessie and Maria Allcock lived here for some years. Both were ardent Methodists.”

The Allcock sisters, Maria and Bessie, were children of agricultural labourer Charles and Elizabeth (nee Turton) who had married in August 1802. Their father had died in October 1827, aged 48, and they then lived with their mother in Club Row, with another sister, Jane, and brother Samuel.
In the 1850’s the family moved into Bath Street where the mother died in 1857, aged 78.

An examination of Ilkeston baptism records reveals that there were at least six Allcock children born to Charles and Elizabeth …. and that does not include Samuel.

Maria, the youngest sister, was variously described as an embroiderer, dressmaker, milliner, seamstress and bonnet maker.
Oldest sister Jane was a glove stitcher.
Bessie (Elizabeth) was also a seamstress and embroiderer, but in later life did the housework while Maria kept a milliner’s shop.

All three sisters remained unmarried.
Jane died at their Bath Street home in October 1881, aged 77.
Elizabeth died in February 1887, aged 76, whilst attending a prayer meeting in the vestry of South Street Wesleyan Methodist chapel.
Maria died in May 1903, aged 82, while living in Anchor Row.

Their brother Samuel — whose baptism I have yet to find — was a labourer, aged 20, when he joined the 32nd Regiment of Foot at Nottingham in January 1827. 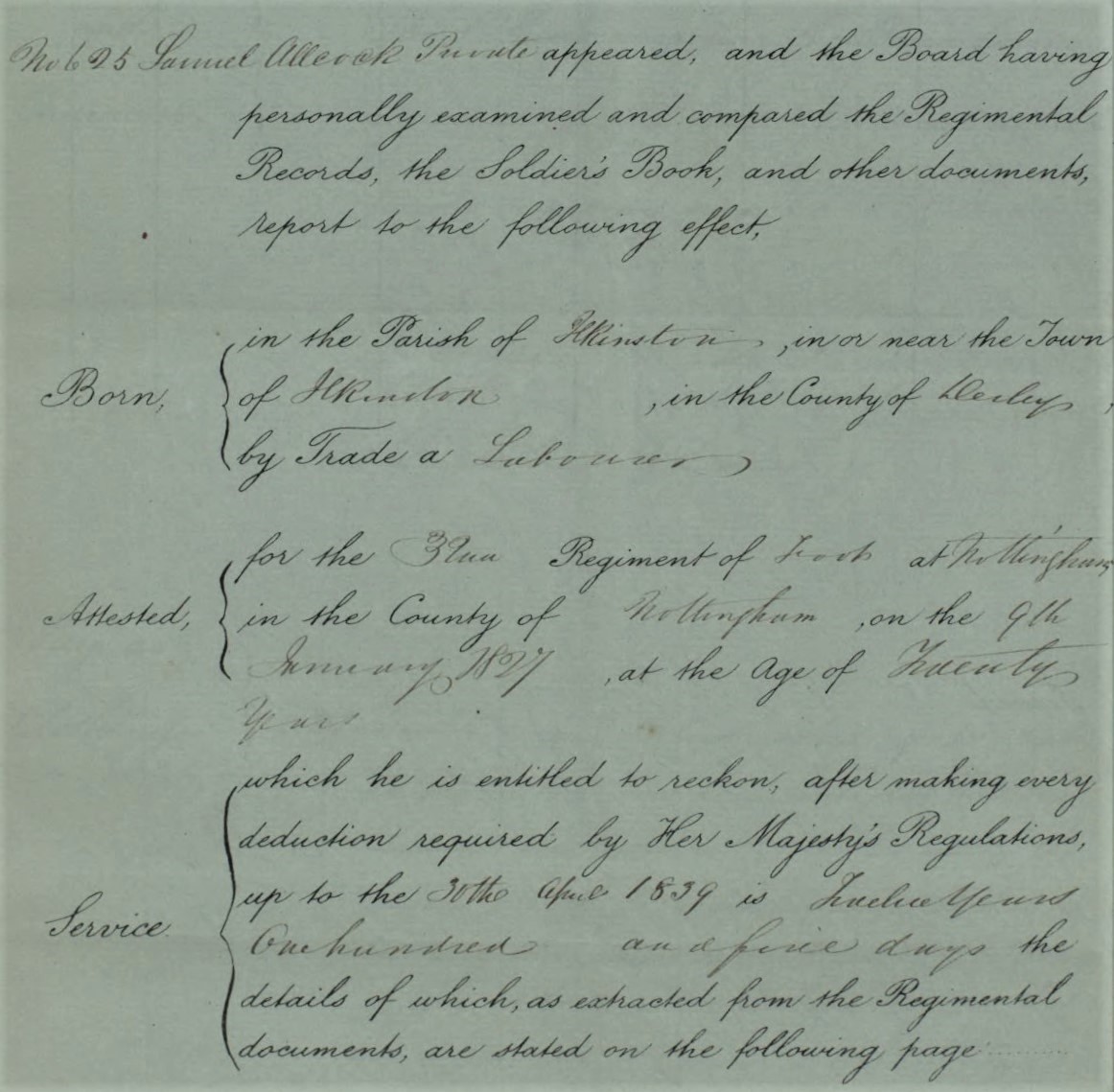 He finally left the service in October 1839, having served for nearly ten years in Canada. At the end his career — in March 1838 — while fighting American ‘brigands’ on the Island of Point au Pelée in Lake Erie, Samuel was shot in the leg, fracturing his thigh bone. This led to a ‘wastage’ of the right leg, thigh and foot, and eventually his discharge on medical grounds.
At that time and walking with crutches, he was described as 32 years 4 months old, five feet seven inches tall, with light brown hair, grey eyes and of fresh complexion.
Although he left the army as ‘a good and efficient soldier’ Samuel’s service was not completely without blemish — he had spent one week in the ‘guardhouse’ in January 1836, after being caught drunk on guard and for habitual drunkenness.
On the 1851 census Samuel is back at Bath Street, described as ‘a cripple’. He died in November 1859, aged 54.

The records reveal three other sons — John, Charles and Isaac, and one other daughter, Ann.

A year younger than his brother Samuel, John also joined the 32nd Regiment of Foot at Nottingham in January 1827, at which time he was five feet eight inches tall, with light brown hair, hazel eyes and a fair complexion. He served until September 1851, his final discharge being in June 1852. During that time he saw duty in Canada (just over 11 years) when he fought at the battles of Saint-Denis and Saint-Eustache in 1837, and in the East Indies (over five years) where he took part in the Siege of Multan, 1848-1849, and the battle of Gujrat, 1849.
Also like his brother John left the army on medical grounds, after having been promoted to Serjeant Major, with an ‘excellent character’ reference.
However it had not always been thus !! 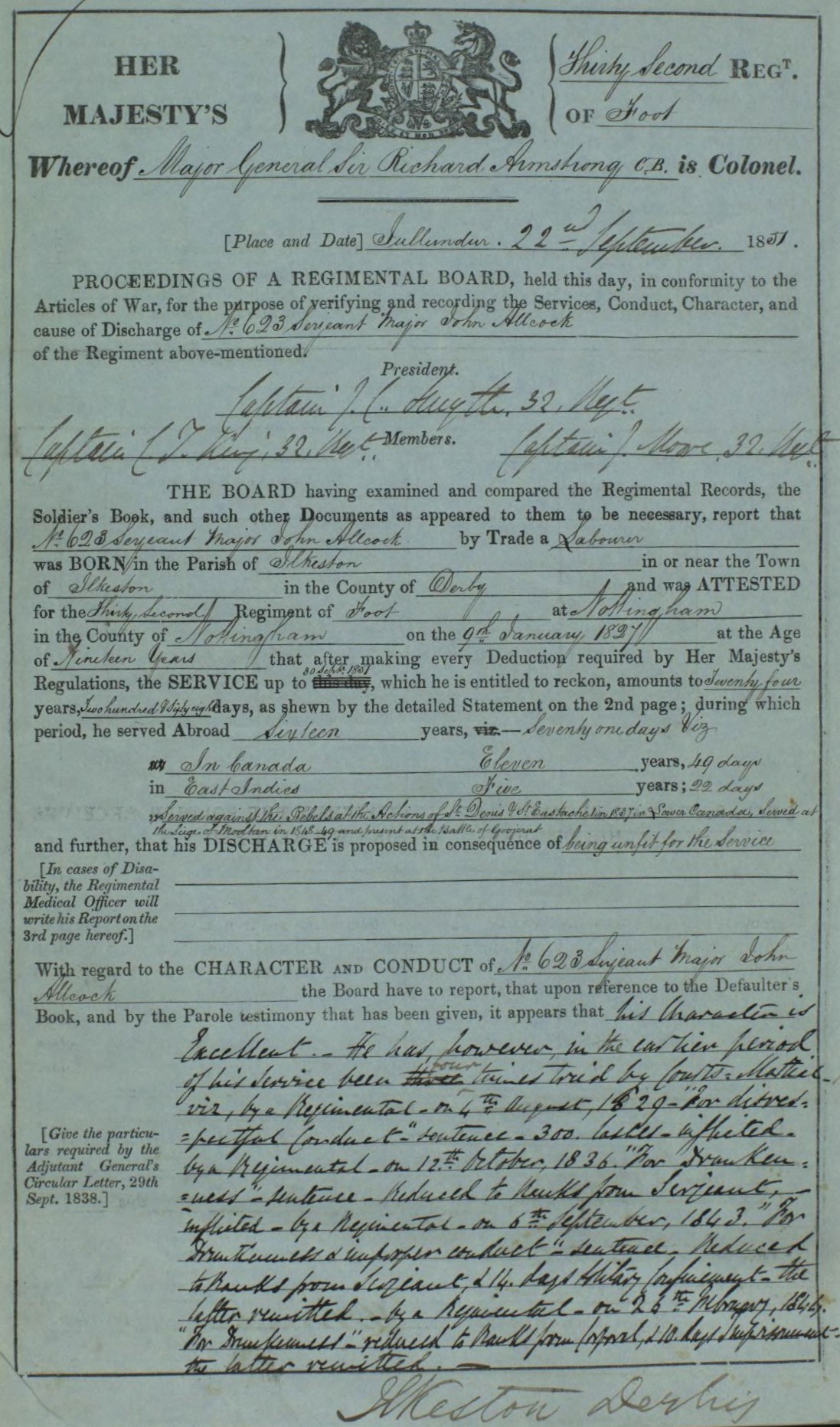 In August 1829 John received 300 lashes for disrespectful conduct; in October 1836 he was reduced to ranks from Serjeant for drunkenness; in September 1843, for drunkenness and improper conduct, again reduced to ranks from Serjeant; and in February 1844, once more reduced to ranks from Corporal for drunkenness. His yo-yo army rank went thus — private, corporal, serjeant, private, corporal, serjeant, private, corporal, private, corporal, serjeant, serjeant-major.
John’s final medical report in 1852, under the heading of ‘Chronic Rheumatism and Catarrh’ stated that ‘this old and deserving non-commissioned officer has for some time been suffering from attacks of Chronic Rheumatism, and Catarrh, to such a degree as to incapacitate him for the arduous and active duties of a Serjeant Major.
His complaints are the effects of age, length of service, and climate’.
The 1861 census shows John living at Bromham Village in Bedfordshire as a Chelsea Pensioner ‘out-patient’ with his son Frederick Aboukir Allcock — the latter was born on July 28th 1846, ‘at sea, near the Cape of Good Hope‘ and baptised a couple of months later at Chinsurah, Bengal.
Frederick died in October 1865 in Bath Street … was he living with his aunts then? His father John had already died.

Gap alert 1 !!
I know nothing of John’s wife/Frederick’s mother yet, except that her name was Mary and was still alive in 1861.

Gap alert 2 !!
I know nothing of the brother Charles after his baptism in January 1813.

However, as for brother Isaac ….
He was the ‘baby’ of the family, born in May 1819. Perhaps as a young lad he had seen his older brothers leave Ilkeston to join the army and explore the world, and had wanted a similar life, when he was older ??
So similar in fact that, in June 1840, he joined the same regiment — the 32nd Foot. (… when he was recorded as two months ‘under age’ ??… his age being given as 17 years and ten months ??)
In March 1854 he volunteered a transfer to the 38th Regiment of Foot, just before it sailed for the Crimea, later to fight at Alma, Inkerman and Sevastopol.
In February 1855 he was promoted to Corporal but after three weeks found himself in (unspecified) bother, such that he was tried by a regimental Court Martial and subsequently reduced in rank .. a private sentinel once more !!
In April 1859 Isaac was once more promoted to Corporal and managed to remain thus, for nearly two years. But would you believe it ?!! At the end of February 1861 he was charged with drunkenness, found guilty, imprisoned for a couple of days, and was back to private once more. 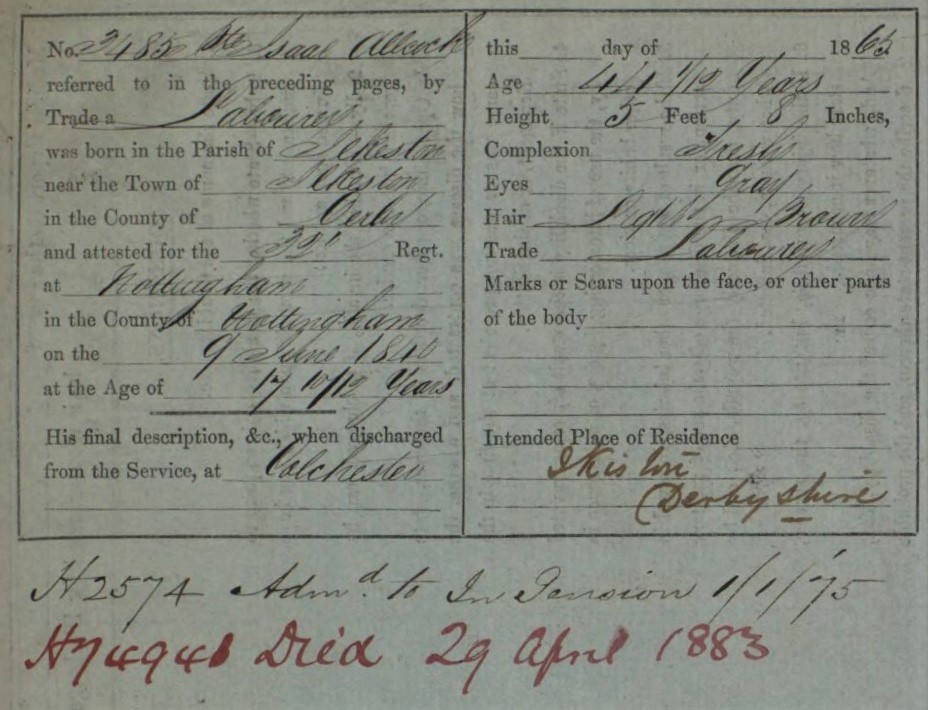 At Isaac’s own request, he was granted his discharge from the army at the end of September 1865, by which time he had accumulated just over 25 years of pensionable service. Twelve years and five months of this had been abroad — four months in Turkey, followed by one year and nine months fighting in the Crimea, and then ten years and four months serving in India. Unlike his brothers John and Samuel (who made their mark), Isaac signed his discharge papers.
At the time of his discharge, he was adjudged of good character, having been awarded two good conduct badges, a medal for the ‘Punjab’ clasps for Moulton and Goojerat, a Crimean medal clasp for Alma, Inkerman (battles in 1854) and Sevastopol (siege 1854-1855), a Turkish Crimean medal, and the Indian Mutiny medal for Lucknow (1857-1858).
On the contrary side however, Isaac’s name had appeared eight times in the Regimental Defaulter’s Book and three times he was tried by Courts Martial.
His final papers show him as aged 44 years and one month old, five feet eight inches tall, of fresh complexion, with grey eyes and light brown hair.

Time for another pint?  We could try next door, at the Queen’s Head ?