And who do we have here ?
Walking down Bath Street to Mount Street, Adeline takes us to meet Charles Chadwick, Elijah Higgett, Joseph Hallam , John McKenna and George Purcell.

“Below (White’s Yard) was Charles Chadwick’s greengrocer’s shop. He also had a stall in the Market Place on Saturday nights.
(And) Spare land next door ?”

In July 1855 he married widow Elizabeth Daft (nee Handley) almost exactly a year after the death of her first husband Henry, a brewer of West Bridgford. She was the daughter of farmer David Handley and Mary (nee Flint) of West Bridgford. 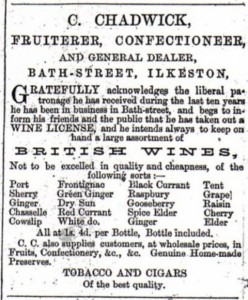 From the Ilkeston Pioneer of November 1860.

In 1866 Charles applied to the Local Board for permission to place his baskets in front of his shop, as usual. However as the road was a public one, the Board concluded that if he was given permission then other tradesmen would follow suit.
And rules were rules !!
His application was thus refused.
But what rules and regulations Charles had to follow should also be followed by others.

In October 1875 Charles accused William Smith, draper of the Market Place, with obstructing the street.
He had found two large boxes belonging to William on the pavement in front of the draper’s shop in the Market Place, waiting to be taken to the railway station. There were also some goods for sale placed in front of the shop window and this was too much for the greengrocer.
He had had enough !! – he complained and took the case to the Petty Sessions – of course !!

William was very put out by this.
The boxes were only there for a very short time until the drayman arrived to take them away, an explanation which the magistrates accepted. Hence the draper was fined 1s and costs – but only for obstructing the road with his ‘sale goods’

However, three days after reporting William’s ‘crime’ — on Thursday (Statute day) and dicing with death — Charles erected his market stall out in the horse road and next to the draper’s premises.
It was when he then placed a few large baskets in front of William’s drapery store and added a couple of planks to extend his stall that William had had enough!!  To him this was wilful obstruction of the highway.
What else could he do but complain ?
It was his civic duty.
Nothing to do with ‘tit for tat’ !!

Hence, at the same Petty Sessions the greengrocer was fined 1s and costs.

“Here land was bought by Mr. Elijah Higgitt about 1856, and he built his first shop on it and removed from East Street where he had commenced business as a tailor and outfitter”.

Charles Chadwick’s father Samuel had died in October 1833 and in March 1849 his mother Ann had remarried to Shipley coal wharf labourer and widower Henry Higgitt or Higgett.
It was Henry’s youngest child Elijah from his first marriage who was the greengrocer’s neighbour.

Born in October 1833, the son of Henry and his first wife Ann (nee Shelton), Elijah Higgitt had apprenticed as a tailor before moving from Shipley Common and establishing himself in Bath Street by the mid-1850’s.
About the same time he married Elizabeth Daykin, daughter of joiner Richard and Ann (nee Clemerson).

In March of 1859 he moved into these new and commodious premises near to the chemist shop of George Purcell, premises which had a separate room for hairdressing, and where he kept a choice stock of cigars, tobacco, fancy pipes, walking sticks, etc.
This was later — in 1871–  to be number 8 Bath Street. 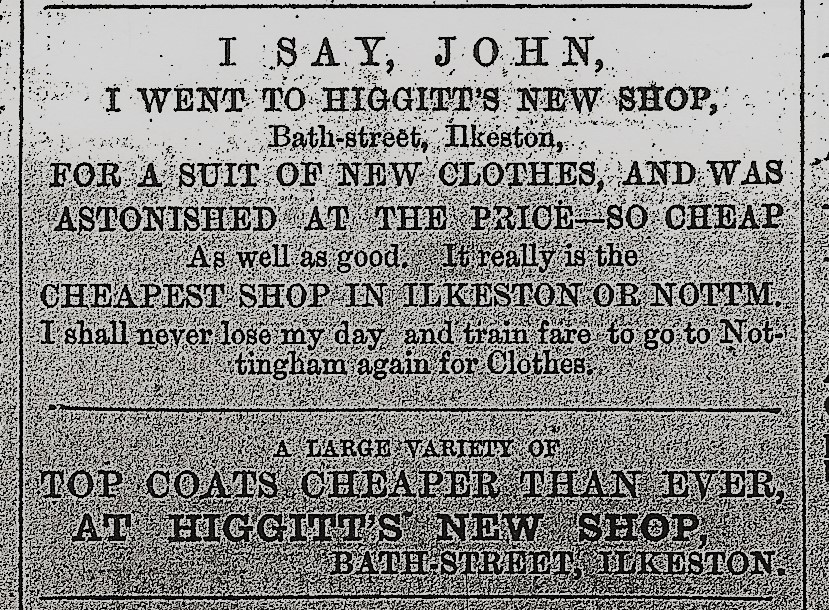 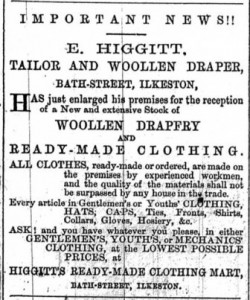 and the Ilkeston Pioneer November 1860

Early one Sunday morning in February 1862, Elijah’s Bath Street premises were broken into. A pane of glass was taken out of a rear window and goods to the value of £10 were taken…..a roll of cloth, pairs of trousers, coats, etc, and a ‘monstrous bludgeon’ was left in the shop by the burglars.

In March 1878 – after 22 years in the drapery business – Elijah opened a new shop, next door to the old one.
Now he was at number 9 Bath Street.
He developed a prosperous business in Bath Street and lived there with Elizabeth and two sons until she died in May 1885, aged 52.

After the renumbering of Bath Street in the late 1880s, the shop was at 21 Bath Street. It was just before Mount Street. At that time the premises were described as “one of the most attractive business features in Bath Street, having a two-storied frontage, 30 feet in length”. And inside one could find and purchase “garments of stylish cut and perfect fit … every description of woollen drapery, hosiery, shirts, collars, cuffs, ties, scarves and silk and felt hats, in all the latest styles and colours of the best London makes”.

In the later 1880’s the couple had a home at Charnwood House in St Mary Street.

In the 1890’s they moved to the Loughborough area eventually to settle in that town, living close to the home of  William Armstrong — who was previously married to Mary Ann’s aunt, Harriet Clemerson.

My thanks to John Daykin who has contributed a detailed account of the family history of Elijah and Elizabeth Higgett, which forms the content of the next page.

In April 1878 into number 8a Bath Street moved The Sun Tea Company – slightly below Joseph Carrier’s drapery, on the other side of Bath Street.

At number 8 Bath Street was Herbert Bostock – formerly a coalminer but now a grocer and confectioner. He was the son of lacemaker William and Sarah (nee Henshaw) and in August 1877 had married Harriet Trueman, daughter of Durham Ox landlord John and Ann (nee Cope). His younger brother Owen had married Sarah Trueman, sister of Harriet, in July 1874.

In September 1881 Herbert was granted a licence to sell beer on his refreshment house premises – from his father-in-law’s brewery? – provided they were for consumption on the premises.

Taking us down Bath Street towards Mount Street, Adeline remembers that ... “before we pass Purcell’s chemist’s shop, we see two whitewashed cottages, standing back from the road, with low wall, in front. Here lived Joseph Hallam, baker”

Born about 1832 baker Joseph Hallam lived his early years in his home village of Dale Abbey.

The 1851 census records him at Nottingham Road, working as a baker’s man, aged 17, for John Wakefield, while 10 years later he is in Bath Street, employed as a baker by Solomon Beardsley.

Eliza Adams, daughter of iron moulder Thomas and Mary, already had two young sons when she married baker Joseph in late August 1861.
Six weeks later and the two sons, William Walker and Thomas, were joined in the family by twins Edwin and Mary.

Joseph Hallam died in September 1867, aged 34. Widow Eliza then appears on the 1871 census as a grocer and baker – on the other side of Bath Street, just below Joseph Carrier’s drapery.

On Christmas day of the following year her business and that of another Bath Street grocer, Amos Trueman, were merged when the two married.
Amos was a son of John and Sarah (nee Skevington) and had been a widower for just over a year, after the death of his first wife, Martha (nee Bostock), the daughter of collier Robert and Mary (nee Wright).

In the latter part of the century Amos and Eliza were trading at 182 and 183 Bath Street and it was there that they both died, Amos in February 1893 and Eliza in December 1903.
Amos was buried with his first wife in the extension graveyard of St. Mary’s Church.

Born in Ilkeston in 1840, John McKenna was the son of Irish-born lacemaker James and Ann (nee Lowe). His mother was a daughter of maltster Christopher and Mary (nee Allen) and so his aunt was Ruth White, wife of Woolstan, living just up the road at White’s Yard.

The 1861 census records him as a ‘factory office clerk’.

“About 1864 John decided to have some alterations done to his house, and the lower front part was taken away, during the following night the upper part gave way and fell into the yard, leaving John’s bedroom to the view of passers-by. Fortunately John had stayed with some friends that night.
The house was never repaired, and after some time the property was sold to Mr. Elijah Higgitt, outfitter, who built his second shop on the site”.

In September 1866 the Local Board bought from John a strip of land at the front of his Bath Street property so that the pavement there could be widened and his frontage made level with that of his neighbour Elijah Higgitt.
There was some disagreement between Board members as to whether to pay £1 or 15s for the land. Always very careful with the money it spent, the Board voted to pay the latter amount.
At the same time John decided to have a shop-front put in the house to fit it out as a provision shop, and he engaged a joiner and a bricklayer to do the work.
The workmen made a space for the window and lowered the ground floor to the level of the street.
Unfortunately that wasn’t all that they lowered!!
At one o’clock of the following morning the whole building collapsed, with fatal consequences… for John’s cat.
Only about six feet of walls was left standing, though John had fortunately removed most of his furniture from the house prior to the alterations.

John was a bachelor while he lived in Ilkeston but in the 1860’s he moved to Birmingham where he married Anne Maria Hodgetts in 1868.

For many years John traded as a grocer and provision dealer at 156 Summer Lane in Birmingham.

And at the corner of Mount Street, we find …. Purcell’s chemist shop.