In this map of about 1880, you can see at the top (north) the Market Hall (not to be confused with the Town Hall) .. this was the old Girls’ National School, standing in the Market Place, with the Grave Yard of St. Mary’s Church on the right, and the Post Office of the Potts’ family on the left.
At the bottom of the map you can just see half of Weaver Row, below a Timber Yard, just emerging onto the old Cricket Ground.
If you locate Burgin Row, then the large building on its south side, and at its end (right) is the Old Cricket Ground Chapel of the Wesleyans. 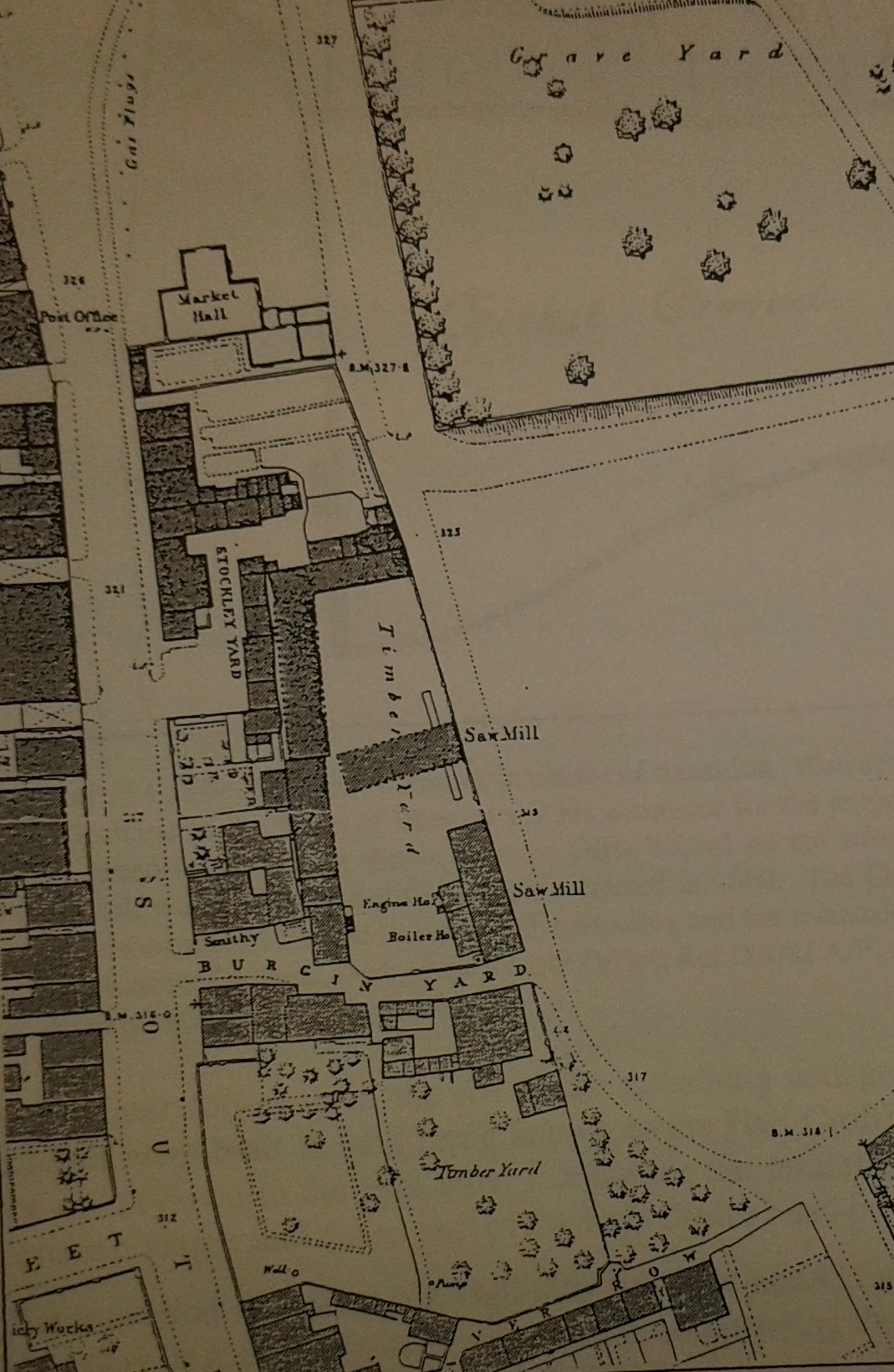 We are walking from bottom to top, along South Street, and so, leaving behind the Sudburys ….

Adeline remembers …. “Next came Warner’s block of houses”.
These were on the south side of Burgin Yard, which ran from South Street to the Old Cricket Ground, along the line of what is now Coronation Street.

“The cottages facing Warner’s Yard and South Street were built back to back, in a block, and their domestic offices were in a yard at the side of the old Chapel”.

“Miss Eliza Birch, sister to Mr. J. Birch, lived in the first one, with her mother” ….. in 1871 this was 44 South Street (East side).
Dressmaker Eliza Birch lived with her mother Eleanor (nee Shardlow) until the latter died on Christmas Day 1862, and she continued living in South Street until her own death in October 1871, aged 48.

“….. and Miss Fritchley with her niece (cousin?) Emma in the second.
Both Miss Birch and Miss Fritchley were dressmakers”.
The Harrison, Harrod and Co. Directory of 1860 lists Sarah Fritchley, milliner, in South Street.
This is possibly the daughter of Cossall farmer Richard and Hannah (nee Wheatley).
In May 1869 she married her first cousin, Bath Street grocer Thomas Dodson Fritchley, son of William and Ann (nee Dodson) and lived with him in Bath Street and later in Station Road.
She is then listed in Wright’s Directory of 1874 as ‘Mrs. Srh. Fritchley’, a dressmaker of Bath Street.

Puzzle alert!!   Who is cousin/niece Emma?

“Up Warner’s Yard lived Mr. and Mrs. Lane, builder, and their two little girls. Mrs. Lane died of erysipelas.
“These houses had not a vestige of back or front yard.
“Coal and water in fact all the out-buildings were in the yard at the side of the old cricket ground chapel.
“It seemed to me a funny thing that houses should be huddled together like they were without proper conveniences when so much land was available”.

“Next was Warner’s house itself …… which in 1871 was 2 Burgin Yard.
Warner’s garden was parallel with the street, the wall was low, and the front of the Warner’s house facing south, stood in a very pleasant position”.

Joiner and master builder Isaac Warner was born in 1801, the son of joiner Thomas and Ann.
His first wife – whom he married in January 1824 — was Mary Chadwick, daughter of rag merchant Charles and Mary (nee Richards) and the sister of James and Charles.
Before the marriage Mary gave birth to illegitimate son, William Warner Chadwick, in 1823 but he died almost three years later. Their legitimate daughter Salome died in October 1825, aged 1 year and six months.
After the marriage, their son William was born in 1826 and in later life he was to serve as his father’s active manager in the family building business.
Mary Warner died in July 1832, aged 32, and six years later Isaac married his second wife, Ann Burgin-Richardson, daughter of blacksmith James and Marinah (nee Smith).
She was also on her second spouse, being the widow of Roland Skevington.
Ann died at their South Street home in March 1865, aged 70, and in June 1872 Isaac married again, to spinster Ann Ridnell, one-time housekeeper to Admiral Sir George Mundy, son of Edward Millar Mundy of Shipley Hall.
Ann Ridnell was the daughter of house steward Michael and Elizabeth (nee Booley).

A staunch Tory ‘of the old school’, Isaac always showed an interest in town affairs, serving as a Churchwarden, overseer and member of the Local Board.

On Tuesday morning, January 12th 1875, Isaac had been around the town, inspecting several of his on-going building projects including the new National Schools, after which he had attended to business matters for the Duke of Rutland.
He dined at the Rutland Hotel at the bottom of Bath Street, and then at about two o’clock he began to walk home, accompanied by grocer Isaac Gregory. The pair chatted freely as they made their way from the Rutland Arms, walking up Bath Street.
Stopping opposite the Queen’s Head and close to grocer Isaac’s new shop they began to contemplate a nearby chimney, apparently the subject of a dispute between two property owners, when builder Isaac collapsed in the street.
A chair was brought to ease his distress but he died within a couple of minutes.
His body was immediately taken to his house where his wife Ann, awaited, already forewarned of the sad event.
A subsequent inquest returned a verdict of ‘Death from apoplexy’.

The Pioneer lauded Isaac’s character.
“In business ‘his word was his bond’– his integrity was unquestionable — and his general character unassailable.
He entered with spirit into public matters; but those with whom he differed most always respected the man, and prized his friendship. For many years he has been engaged as the builder, &c, on the Duke of Rutland’s Ilkeston estate; and the Town-hall, South-street Schools, Cotmanhay Free Church and Kensington Chapels, and many other works, will long bear witness to his character as a master who would have work ‘done well’”.

One other ‘work’ for which Isaac and his son William were responsible was the Unitarian Chapel in High Street, built in 1869.

John Francis Nash Eyre, vicar of St. Mary’s Church since 1873, also extolled Isaac’s virtue.
“He was a man of very high moral principle, one upon whose word you could rely; just, upright and honourable in all his dealings; honest in heart and purpose; a true Conservative, and a thorough Churchman…. When I came a stranger into this parish, he was the first whom I had reason to thank and esteem for his impartial judgment  and sound advice in many important matters, and our friendship has continued unbroken”.

Isaac was buried at St. Mary’s Church on Friday afternoon, January 15th, and on the same day was joined there by two other old Ilkeston residents  ….
Ann Flint (nee Hickson), aged 81 and South Street widow of tailor John,
and Nelly Riley (nee Booley), aged 78, the Bath Street widow of grocer Thomas.
They too had died on January 12th.

The day was “a solemn and monitory one for Church people and for parishioners generally. At the call to the morning and evening services on (the following) Sunday muffled peals were rung in memory of the deceased, and the Vicar in his sermons referred especially to the loss the Church had sustained by their removal from the Church militant”. (IP)

Isaac’s third wife Ann outlived him and in 1888 could be found living in Station Road where she died on May 5th. The Derbyshire Times and Chesterfield Herald thought it newsworthy that this old woman, aged ’85’, should die so suddenly — her open bedroom window had alerted neighbours that something might be amiss, and when they entered the house they found Ann, unconscious on the floor of the front room. She died the next day, never recovering consciousness. She wasn’t 85 but 77.

Son William Warner and his ‘property empire’ in 1890

Isaac’s son, William, succeeded to the Warner building business, occupying the same house as his father — on the 1891 census he is living at 2 Burgin’s Yard off South Street, with his wife Harriet (nee Webster). Almost exactly a year before — in June 1890 — William tried to auction off all his property in this area in what was described as “the most influencial gathering at an auction sale seen at Ilkeston“, at Edwin Sutton’s auction mart in Bath Street.

Looking at the  map, top of the page, you might be able to identify the following …
There was an extensive copyhold builder’s yard, now used as a saw yard and timber yard, with an engine house, boiler house, workshops, sheds and other outbuildings, all north of Burgin Yard on the map.
William’s copyhold dwelling house and outbuildings, plus two other copyhold dwelling houses, fronting onto South Street, and then occupied by the families of scavenger James Trueman and warp hand Robert Tuck — you can find these on the census. These are on the south-west corner of Burgin Yard and South Street.
A piece of copyhold building land, adjoining William’s house, used as his garden, with an extensive frontage to South Street — south of William’s house, with trees and a well.
The old freehold Cricket Ground Chapel which William now used as a joiner’s workshop, just south of which was a large piece of copyhold land, now used as a stone-yard — south of Burgin Yard, marked ‘timber yard‘ on the map.
The whole covered an area of about 4150 square yards.

There were also nine freehold houses in Albion Place — numbers 8 to 16 inclusive, with a freehold building at the back, now unoccupied.
And a freehold close of building land, Nether Hays Close, down Market Street, with extensive frontage onto Park Road.
Five houses, with gardens, in Gladstone Street — numbers 22, 24, 26, 28 and 30. Also in Gladstone Street were five freehold houses, on the north side, being built by William — numbers 31, 33, 35, 37 and 39.

Not one item of this auction reached a satisfactory reserve price, thus remaining unsold. So, William tried again on March 5th of the following year. And with almost the same result !! All the property failed to reach an acceptable price except for the premises in Gladstone Street — the five finished houses were bought by ‘J.Wright’ while the five unfinished houses were bought by George Barker.

Now we’ll have a closer look at the Cricket Ground and chapel.