The next shop (after Widow Brown) was taken by Mr. Ralph Shaw, butcher. They had not any children.
Mrs. Shaw attended the South Street Chapel.

It was Joseph Shaw who was the butcher of South Street not his older brother Ralph, who was a saddler and harness maker, living on the other side of the same street.
We shall meet the latter shortly.

Joseph Shaw married Mary Riley, daughter of framework knitter John and Jane (nee Walker) in May 1849 and there were no children in the family.

In December 1863 great interest was aroused in the town when Joseph found himself in a foot race with Samuel Pounder, assistant surveyor of highways and about ten years his junior. Joseph was light and long-legged while Samuel was shorter, more robust, and had recently broken his leg.
No contest then?!
Bets were laid — including one between the two participants — and the race began. Seven laps of the Cricket Ground were followed by a run to the Exchange in Nottingham and then back to the Market Place in Ilkeston.
Samuel returned well ahead. ‘Poor Joe’ had to be ‘carted home most of the way’; he was about 45 years old at the time.

The people of Ilkeston seem to have been extremely keen on races, boxing matches, shooting or fishing contests and animal coursing.
In 1864 the Pioneer reflected upon this interest.

“A race! Whether rabbit, dog, man, or donkey race, has a magic influence on the minds of Ilkestonians. Announce it one hour, and the next, thousands will flock to the scene of the sport. No sensations at the chapels, schools or music-halls can equal it. Anyone wishing to lecture the people of Ilkeston on intemperance, or any of the sins they love, could not draw an audience with more success than by announcing ‘A race’!” 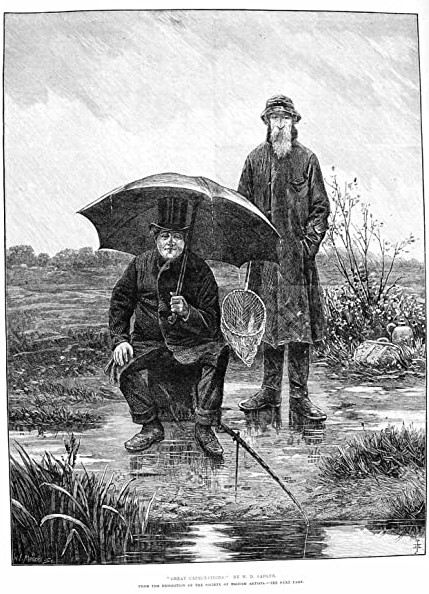 In 1872 a considerable number of spectators wandered down to Green’s Pond, part of the Erewash Canal ending at Gallows Inn Lock, to witness and ‘speculate on’ a fishing match between coalminers Henry Tunnicliffe of Ilkeston and Jonas Singleton of Marlpool.
The first cast was at 10am and five hours later, at the end of the contest, Henry had landed precisely one fish, weighing half an ounce. As this was one more than his opponent he was declared the winner and pocketed the side bet of £2 10s.
The Ilkeston Telegraph reported that “this magnificent specimen of the finny tribe has been sent to Nottingham to be stuffed and will be kept by his captor as a memento of his good luck”.
A few weeks later and the angling couple had moved a short distance along the Canal — to the head of the pond that ended at White House Lock, near Severn’s Bridge — for a ‘return match’.
About 200 spectators saw another Tunnicliffe victory.

And the last shop on this side was owned by William Sanders.