The New Inn at Providence Place

From the Primitive Methodist Chapel, we are walking down Bath Street, past Dakin’s Row on our left, past a row of shops which are described below, and on to the New Inn at Providence Place. 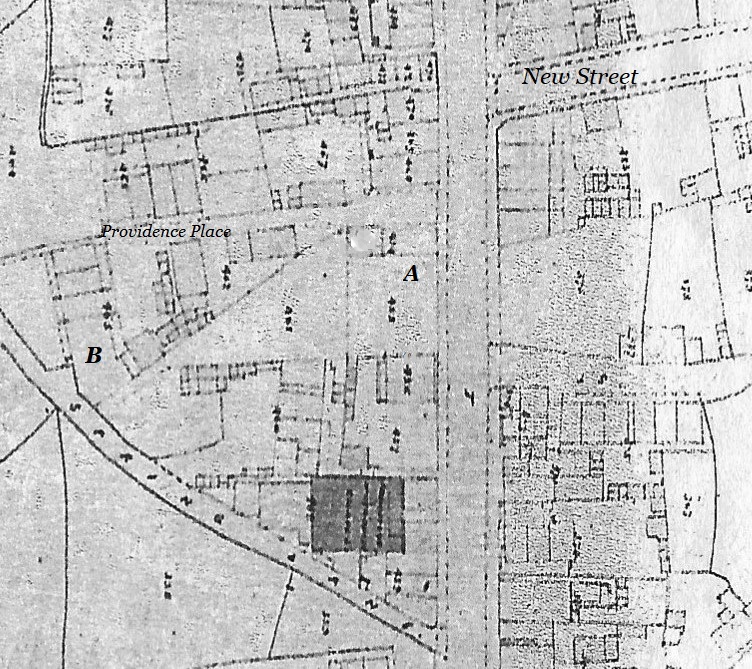 New Street is called Station Road today.
A is the approximate site of the New Inn … which doesn’t appear to have been built yet
B is where the Spring Cottage Inn is.
The building in bold shade is the Primitive Methodist Chapel.

The details of the following description come from documents kindly loaned by Jim Beardsley
On May 10th 1852 John Ball purchased property, which included the site of this New Inn, from the estate of the Duke of Rutland. John paid £210.
The area of this site was 1091 square yards and was occupied, or had recently been occupied, by Joseph Daykin. On its north side was land owned by autioneer John Ross, while on its south side was property just sold by the Duke to John Daykin, a lace agent and the son of Joseph. On its east side was Bath Street, and on its west side was ‘a narrow lane’ (Spring Lane) which led down to the Ilkeston Hall or Manor House. (No mention of the New Inn itself which wasn’t yet built). 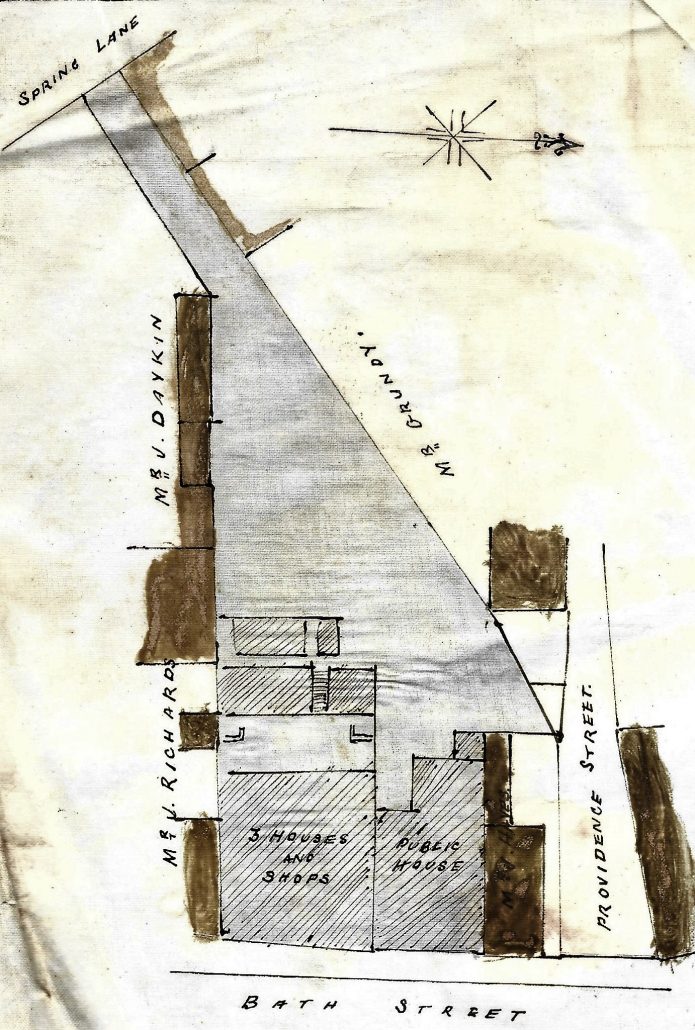 It was then described as having an area of 1000 square yards or thereabouts … notice that it was a little smaller than when John Ball first bought it, because he had sold a small piece to tailor Joshua Bates, who had later passed it on to boot dealer Joseph Hayes — you can see it as a brown area on the plan, between the ‘Public House’ and Providence Place. Notice too, that at this time the New Inn public house did not stand at the corner of Providence Place, as it does today.

The 1000 square yards was bounded on the north by land formerly owned by John Ross but lately by Mark Beardsley (this would be the Spring Cottage Inn and its outbuildings) and by the land now owned by Joseph Hayes; on the south by land belonging to John Daykin (Daykin’s Row) and John Richards; on the east by Bath Street; and on the west by the narrow lane known as Spring Lane, which led to Ilkeston Hall.

Born in 1821, William Lacy Bostock was the son of Henry and Hannah (nee Lacey) and at the time he purchased the property, was a stone miner. Shortly after occupying the premises, William took out a mortgage for it, and a couple of years later — on January 30th 1869 — he borrowed more, using the premises as security.
In December 1870 Charles William Smith had arrived in town to take over the operation of the New Inn. William Lacy Bostock was now living at Mundy Street, working as a stone miner once more.
In February 1872 the licence of the beerhouse, then numbered 39 Bath Street, was transferred to Francis Orgill who arrived from Loughborough.
At the beginning of 1873 the money borrowed by William Lacy Bostock was still owed to his mortgagees, with arrears !! And so the mortgagees invoked their right to sell off the premises. Thus, on January 23rd 1873 the premises were once more conveyed, by the original mortgagers of William Lacey Bostock, to James Bonsall. The price now was £1500. And on the following day James took out a mortgage on the property, of £800.
Born in Alfreton about 1819, James had recently arrived in Ilkeston with his family from the Clay Cross area, where he had worked as a coal miner, and at one time, was the publican at the Rose and Crown at Clay Cross.
James kept up his interest payments and in the next year he also paid off his loan of £800. So, on July 18th 1874 the premises were reconveyed into the possession of James. And at the same time he applied to build a new stable at the rear of the New Inn.
In September 1875 Francis’s licence was renewed although he had been convicted of keeping the inn open during prohibited hours.
In September 1876 the Inn’s licence was transferred to collier Joseph Bonsall, son of James and Sarah of Bonsall Place. Joseph died there in September 1880, aged 40, whereupon the licence was transferred to his widow, Harriett, and she is recorded there on the 1881 census. A year later she married Alfred Pass and went to live in Carr Street. 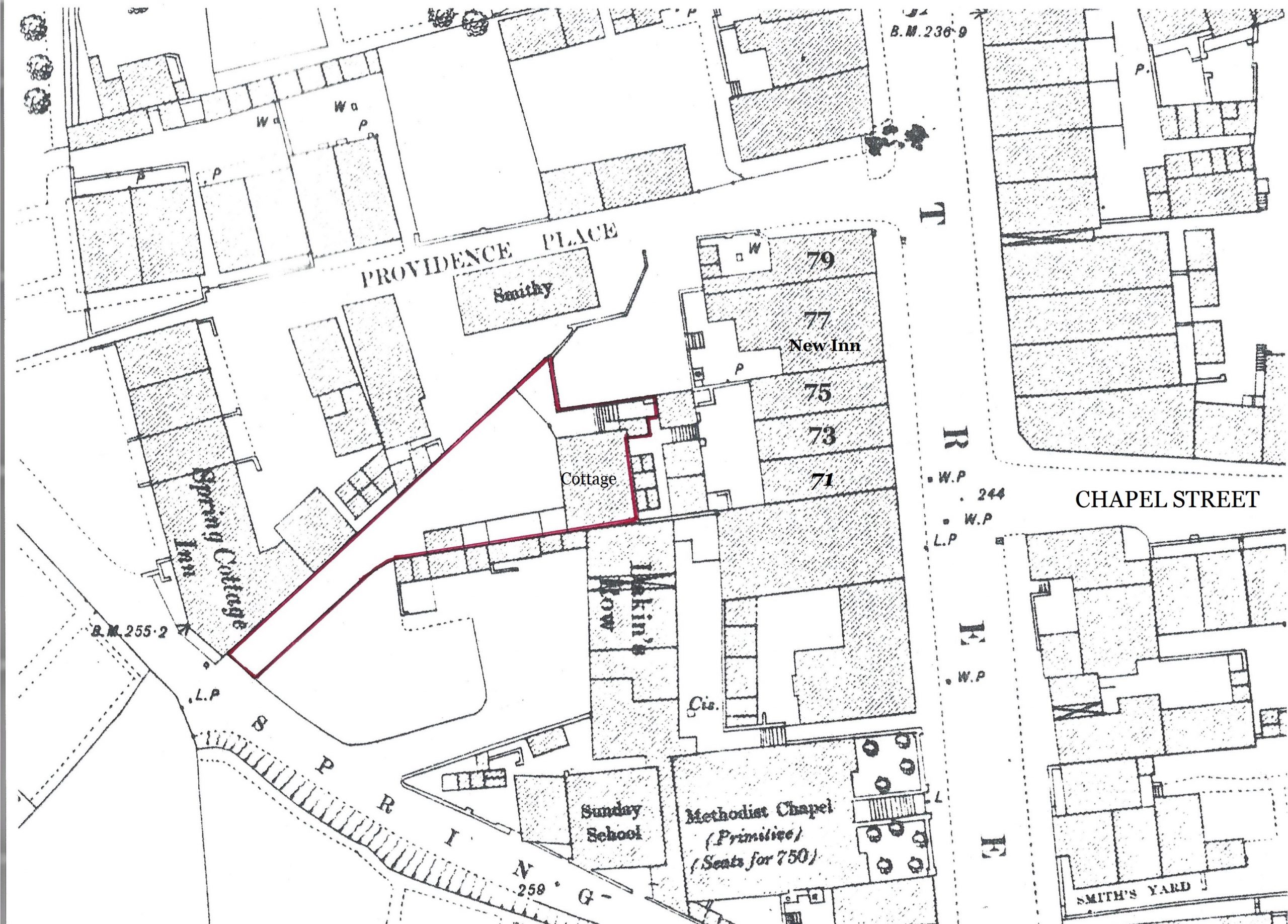 Above is the area about 1881; note that the numbering of shops and houses is not that of 1881 but of a few years later.
Wright’s Directory of 1883 shows William Trueman as the landlord of the beerhouse, still numbered 39 Bath Street, though the premises were still owned by James Bonsall.
By 1888 it had the same landlord but a new number — 77 Bath Street.
On June 28th 1890 William Trueman was still the landlord when his wife Eliza (nee Doar), having just waited upon a customer, stepped out into the back yard and fell down dead. She had been under medical attention for some time and so no inquest was held. Eliza was aged 40. Ten months later — and still landlord — William married Eliza’s half sister Matilda Doar.

On December 16th 1893, James Bonsall died at Bath House in Bath Street. In his will he left the New Inn, together with its yard, outbuildings and appurtenances, to his youngest child, Walter. At that time the inn was leased to Messrs. Shipstone and Sons and was still occupied by landlord William Trueman. Walter also inherited a cottage with a yard and outbuildings at the rear of the New Inn. This cottage was then occupied by William Carrier and had a frontage to Wilmot Street, between the Spring Cottage Inn and the row known as Bourne Cottages; in August 1898, it was mortgaged to Thomas Samuel Sisson of 5 Heanor Road. You can see this property outlined in red, on the map above. Note that Spring Lane on the 1881 map had become Wilmot Street by the end of the century.

In a further will bequest, James left three premises, with their yards and outbuildings to his daughter Hannah. She had married farmer Frederic Hodgson in 1862 and lived on the family estate at Woodthorpe near Chesterfield. These houses lay just to the south of the New Inn and were then occupied by baker and confectioner Thomas Adlington who had married Amelia, the youngest daughter of James Bonsall, in 1886; pork butcher Alexander Mellor ‘Alic’ Barker; and grocer Thomas Gibson. The three properties were numbered 75, 73 and 71 Bath Street respectively.

Still the landlord, William Trueman died on May 17th, 1897 at the New Inn. The premises were then occupied by Benjamin Swindell and he was there as the Victorian era drew to a close. 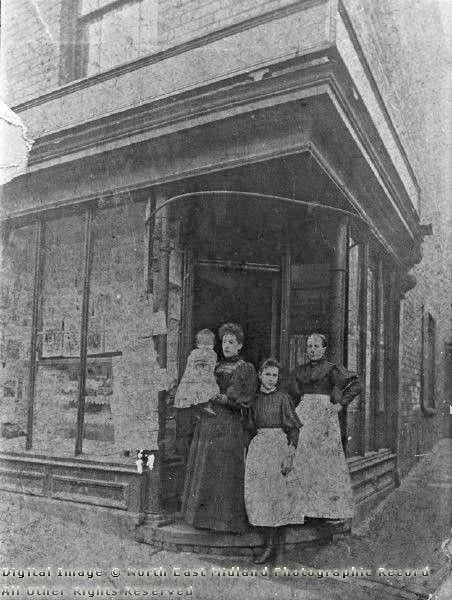 The above photo, taken in the mid-1890s, shows the premises at the corner of Providence Place (on the right) and Bath Street (where the photographer is standing). This is Number 79, in the possession of Sir Walter Foster, MP for Ilkeston; it was home to the Lee family. Reuben Lee was a fried fish dealer; also a potato dealer, and later a newsagent, perhaps as you can see (fish and chips anyone, wrapped in yesterday’s newspaper ?). On the doorstep is his second wife Mary (nee Ormiston) who would be about 50 years old. 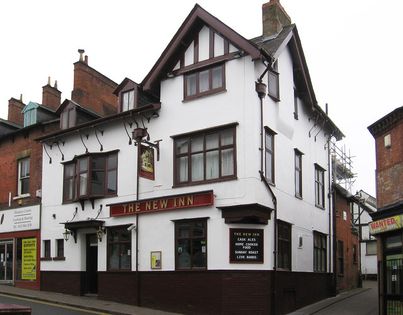 The New Inn in recent times …. but still 77 Bath Street

To summarise this part of Bath Street at the end of the Victorian era …
At number 79, on the corner of Providence Place (owned by Sir Walter Foster, I believe) was Reuben Lee, newspaper agent.
At 77 was the New Inn, with its landlord Benjamin Swindell.
The cottage and property behind the Inn was owned by Robert Widdowson.
On the north side of this property was a) the Spring Cottage Inn, leased (?) by brewer James Eadie Ltd, (taken over by Bass in 1930) and b) premises owned by Mrs. Grundy.
To the south of the same property was the estate of the Primitive Methodist Trustee.
Numbers 75 to 71 Bath Street were owned by Hannah Hodgson.

And elsewhere you can see a plan made within a Conveyance Agreement of 1899 showing this area.

We now continue to walk down Bath Street to Adcock’s Yard and meet the Calladines and Kellys.