Adeline writes that “Enoch Carrier lived in one of the houses”. … close to Samuel Wood.

At the time of the 1841 Census, Enoch Carrier — born on July 27th 1839 —  was the oldest surviving son of Henry and Rebecca whom we have just met. He was living with his parents in New Street when the Allen family of shoemaker Thomas and Barbara (nee Copeland) arrived in the street from London Road in Derby, and with them was daughter Beatrice

Enoch, the grocer’s assistant to Joseph Carrier of Bath Street, married Beatrice on June 30th 1861, and established his own grocery and provisions business in Bath Street in the May of 1879, commencing with a capital of £80. His shop was at the corner of Chapel Street, at what was then 90 Bath Street, previously the premises of chemist William Fletcher. (In the renumbering of Bath Street in the late 1880s it became number 76) 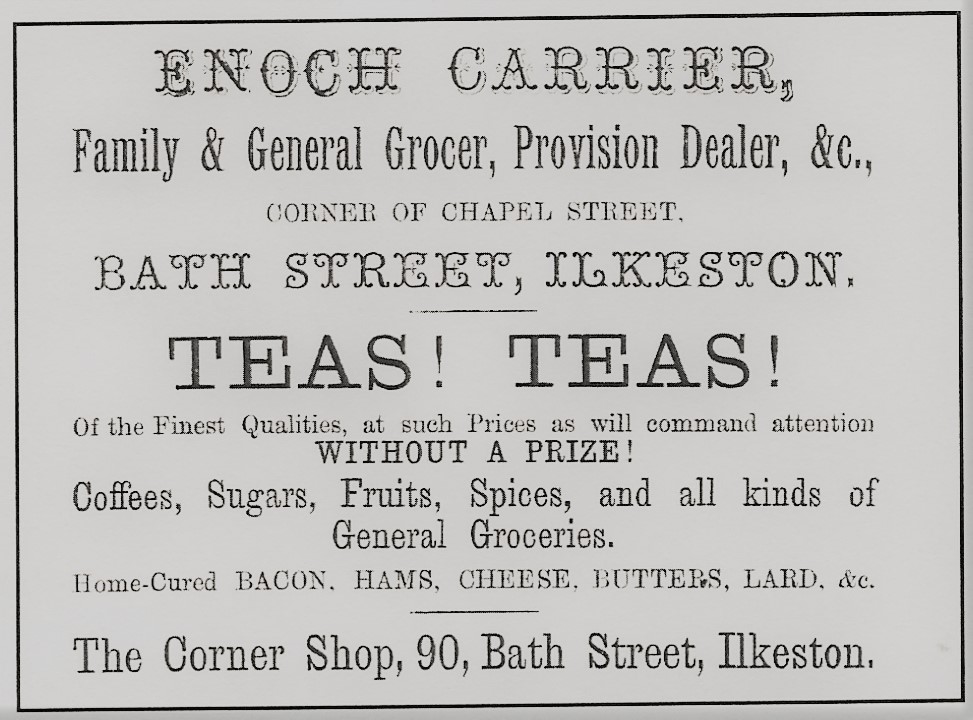 By 1888 his grocery business was in financial difficulties, as was his partnership with his brothers, and the Official Receiver was called in. Before his departure to the United States in 1888 Enoch had a part in the family lace business, with his two brothers, Henry and George, trading as Henry Carrier and Co. (Another indication that he was he one of the three brethren?).

Enoch arrived in New York in January 1889 on the ‘Arizona’ with two sons, Frank and Lawrence. His wife Beatrice and five other children followed ten months later on the ‘Alaska‘. The family settled in Brooklyn, New York, where Enoch continued his work as a tea and coffee salesman/agent. 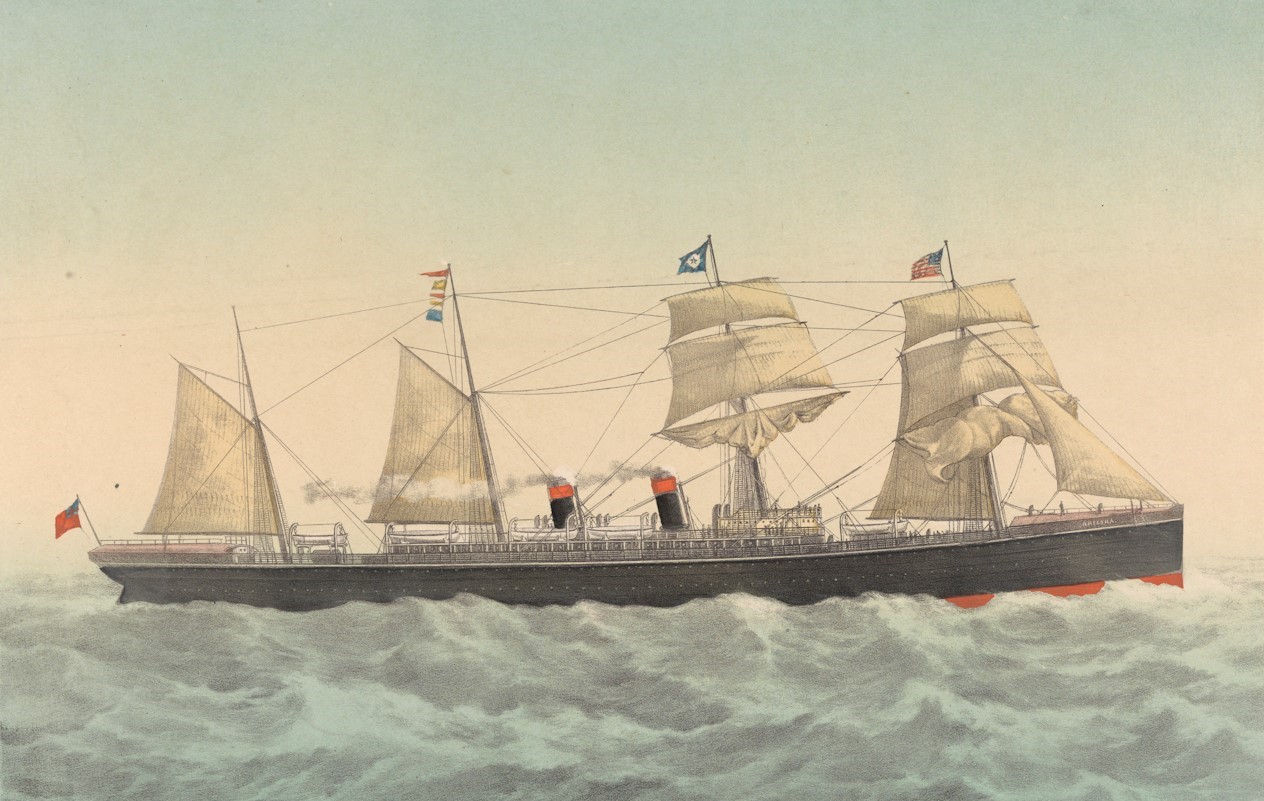 S.S Arizona of the Guion Line 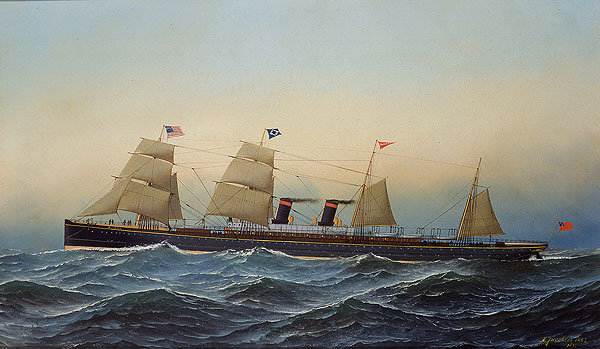 Enoch was father to at least ten children.

Born in 1862, daughter Ellen married clerk Walter Cadman Hoe in 1880,  after giving birth to their illegitimate daughter Florence Hoe Carrier on April 11th 1879. The couple had ten further children and continued to live in Ilkeston.

We shall shortly return to son Alfred, born in New Street on October 27th 1864.

Agnes (February 16th 1867), Beatrice Ada (February 16th 1873), Bertha (May 20th 1875), Rebecca Annie (May 23rd 1877), and Reginald Meynell (1879) were all born in New Street, or Station Road as it was renamed by 1871. These children accompanied their mother Beatrice on board the S.S. Alaska, as they emigrated to Brooklyn, New York in October 1889, and it appears they were a very close family. Agnes, unmarried, continued to live with her parents, and after their death, with her married sister, Rebecca Annie, the latter’s family, and her brother Frank. She worked in the ‘Dry Goods’ trade and  died on November 21st 1923 at the family home in Brooklyn.

In January 1889, Frank emigrated to the United States, accompanied by his father and his younger brother Lawrence, a few months before his mother and other siblings, aboard the S.S. Arizona. He became a naturalized US citizen on October 19th 1894. Like his sister Agnes, Frank lived with his parents and then his relatives, working as a silk weaver, until he died on April 19th 1938, at 338 Lafayette in Brooklyn. His brother Lawrence, a clerk, died in Brooklyn on June 4th 1933 … by which time he had married (to Margaret Strube on Oct 22nd 1907 ?) and was living apart from the other members of the Carrier family.

Beatrice may have married Albert Edward Emmett and died a few months after giving birth to a son, Albert Edward junior, on March 2nd 1894.

Bertha married Irish clerk John A Nelson on June 2nd 1897 and continued to live in Brooklyn. The couple had four children and Bertha died on September 6th 1919.

Rebecca Annie also married, to John Edward Taylor, a warehouse superintendent born in New York, on June 27th 1900 at Brooklyn; the couple had at least three children. She died on February 19th 1943 at Brooklyn.

The Ilkeston Advertiser reported the death of Reginald Meynall, on June 16th 1899, at Brooklyn. 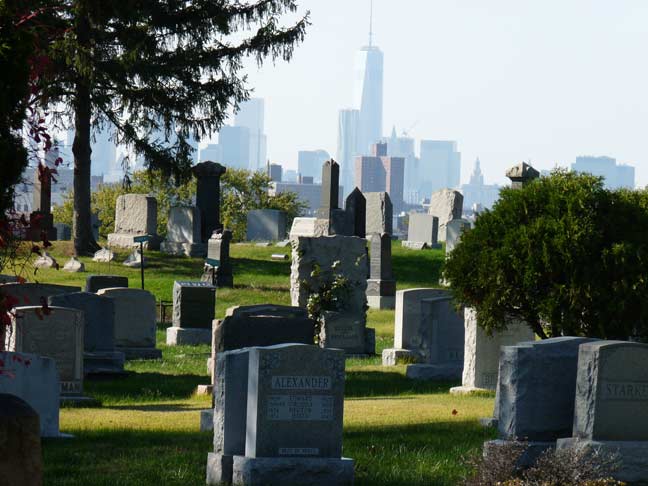 The strange death of Alfred Carrier

Apart from older sister Ellen, Alfred was the only one of the Carrier children to have married before the family emigated. Like his siblings, he was born in New Street — on October 27th 1864 — and married Catherine Adams of Stanton Gate on December 5th 1888 at Heanor Wesleyan Methodist Chapel.

Then the family of Alfred and Catherine is discovered on the 1892 census at Brooklyn, New York, with Alfred’s mother-in-law, Rebecca (nee Barsby).

But no Alfred Edward ?

Father Alfred seems to have arrived at the beginning of November 1889 on board the S.S. Aurania.

And shortly after their arrival daughter Mabel was born. 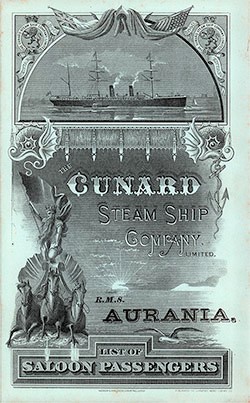 Perhaps without Alfred, the family may have returned to England in the early 1890’s but a few years later returned … on the S.S.Teutonic ?

By 1898 the Carriers were living on the sixth (or was it the fourth ?!?) floor of an apartment house at 67 Sumpter Street. Alfred was then employed as a commercial salesman by  J.W. Hambler, a dealer in tea and coffee at 13 Green street in Manhatten. He suffered from gastric catarrh and on the evening of December 17th, complained of severe stomach pains; he left the house ‘to get some relief’, returning a short while later, claiming that he had taken a couple of drinks of whisky.  Alfred then sat quietly in a chair, chatting peacefully with his wife Catherine; his older children were asleep in their bed area while baby Dorothy Christina, then ten months old, was with them. Without warning Alfred became agitated and seized by anxiety. Picking up a hatchet, he approached his sleeping baby daughter; Catherine intervened to protect the child, and was subsequently struck four times on the head, one of the blows glancing off her to hit the baby. Fortunately neither were seriously injured. A neighbour responded to Catherine’s call for help and the ambulance service was quickly on the scene to attend to the minor injuries.

Alfred fled the scene and disappeared. “He left home without his hat.”

A general alarm was sent out for his arrest. Detectives Mitchell and Becker began a search for him without immediate success. But then, the following day ….. “the people who chanced to pass the corner of Chauncey street and Saratoga avenue yesterday (18th) morning observed the body of a man hanging from the clothes post in the yard of 147 Saratoga avenue.”

The police were called and the body cut down, to be later identified as Arthur. No-one would speak ill of the deceased — he was a ‘good husband’ and ‘exemplary man‘, did not drink liquor or use tobacco. Catherine could not explain his behaviour other than to say that perhaps his pain was such that he was rendered ‘temporarily insane’. 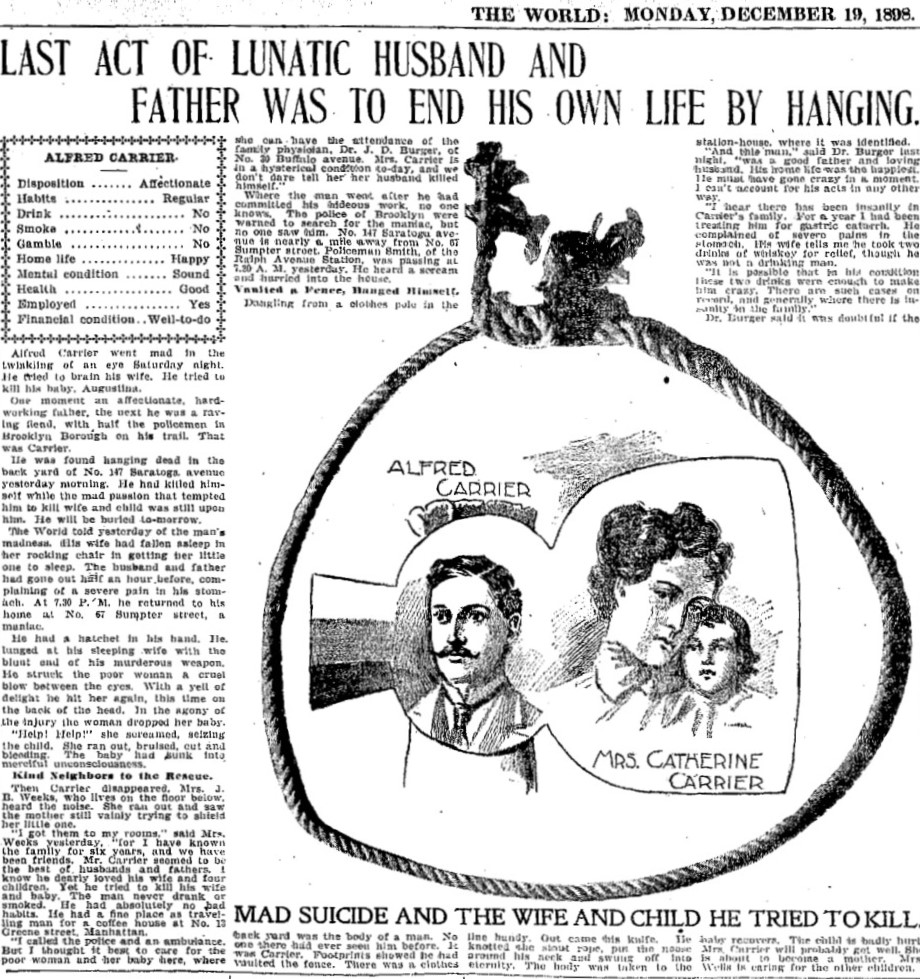 At the end of the above article it mentions that Catherine was about to become a mother (again) … at least that part was correct !! On December 28th she gave birth to Alfred Frank James Carrier.

Catherine, her children and her mother had returned to Ilkeston by 1901. She died on April 6th 1946, at 83 Wharncliffe Road in Ilkeston. She was living with her unmarried daughter Helen, who died at the same house on January 4th 1961. Rebecca Adams died in 1911 in Ilkeston.

Son of Alfred and Catherine, Arthur Edward Carrier, born on June 15th 1893, at Laburnum House, Nottingham Road in Ilkeston, was ‘adopted’ by Catherine’s half-sister Sarah and her husband John Henry Wood of Craggie, Longfield Lane. In 1914 he enlisted in the 9th Battalion King’s Royal Rifle Corps, in May 1915 was sent to fight in France and was killed on April 9th 1917.

Of course the members of the Carrier family were not the first, nor the last Ilkestonians to cross the Atlantic Ocean and establish a new life in America.

Job Whysall, the son of labourer Christopher and Ann (nee Knighton) was born on January 29th, 1797 at Ilkeston, and baptised at the Independent Chapel in Pimlico on March 6th of that year. (His father died shortly after this event)

Job married Ruth Hutchinson, the daughter of cow-keeper Joseph and Catherine (nee Beardsley) on June 23rd, 1823. About 1829 they moved to Eastwood, Nottinghamshire, where Job can be seen on the 1841 census, serving as a colliery bailiff. Ruth died there in September 1847. And then Job doesn’t appear on any further British census … here’s why. 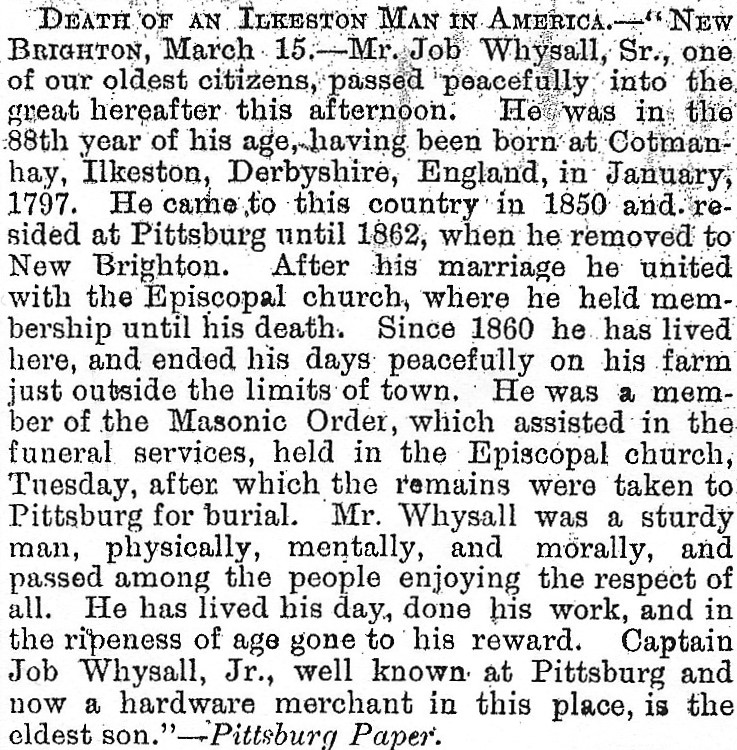 Job had arrived at New York in July 1850, on board the ‘Constellation’ with his two sons Job junior and Joseph (Joe). His daughters Ruth, Mary, Sarah and Fanny travelled to America, on the ‘Jane H Glidden’, in September of the following year and therefore they can be found on the 1851 English census, three of them in Ilkeston. (Where was daughter Mary, born in 1836 ?)

We shall pause at this area of New Street and North Street to consider what Adeline has to write about the housing in Ilkeston.