Adeline describes this part of Bath Street and its occupant ….“Then came Mr. Joseph Carrier’s garden with high wall in front, house and two shops.” On the 1871 census it was number 113 but by the end of the century it was number 10. (possibly 10 and 12)

“Joseph had the shops in Bath Street. The grocery and drapery shops had small bow windows, two in each shop, door in the centre. The front room of the house below was used by Mr. Carrier as a hat shop. The back and upper part was occupied by girls embroidering lace gloves, mitts and falls.” 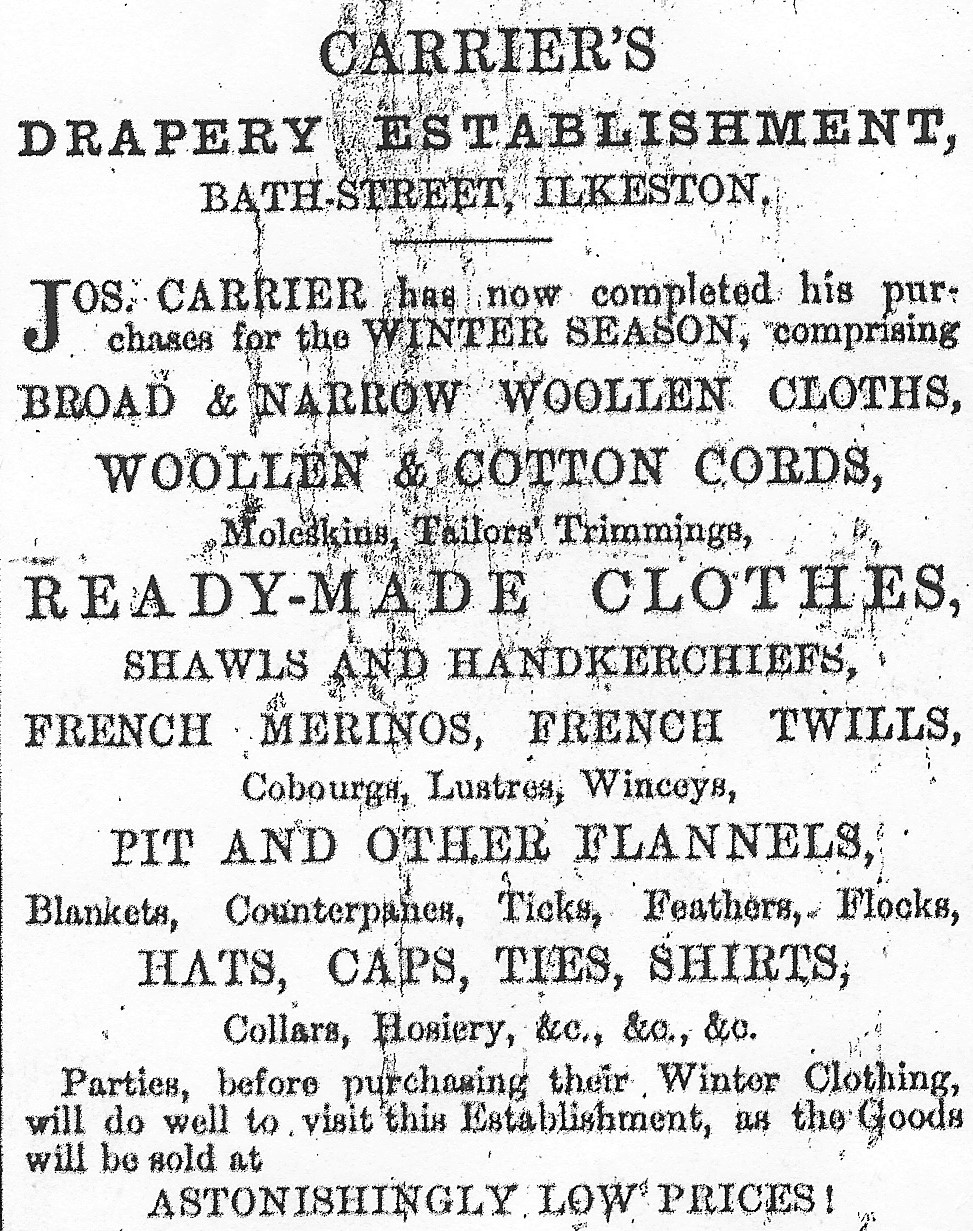 From the Ilkeston Pioneer November 1860

“The windows between the grocery and drapery shops were utilised for gentlemen’s wearing apparel.”

For years Joseph was one of the most prominent and active members of the Wesleyan Church, South Street, and for many years officiated as superintendent of the South Street Sunday School.

He was a partner in the firm of Henry Carrier & Sons, lace and hosiery manufacturers, of Ilkeston and Nottingham, founded by his father Henry. He also owned the largest drapery and grocery establishment in Ilkeston – according to the Pioneer and the Nottinghamshire Guardian.

In 1858 Joseph bought one acre of land and the house occupied by William Fritchley in Bath Street from the estate of the late Mr Denison. (IP)

When his brother Samuel died in 1865, Joseph took over the management of the Ilkeston interests of the lace and hosiery business, owned by his elder brother Henry. At the same time and for the same reason he took over as secretary of the Ilkeston Permanent Benefit Building Society.

He was a member of the Local Board from its inception in 1864. 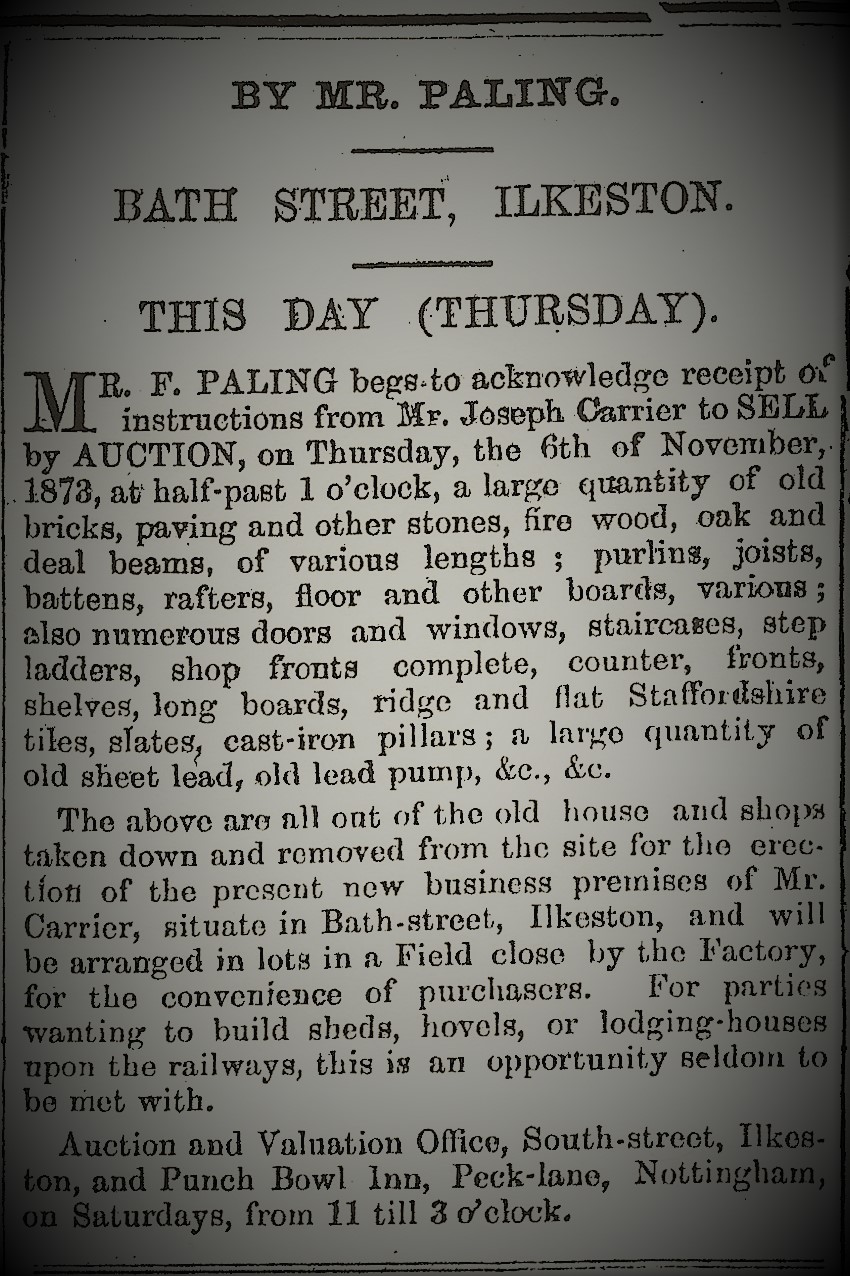 Joseph died on October 24th 1879, aged 59, and was buried four days later in the General Cemetery.
The streets of the town were crowded on that Tuesday well before noon, the scheduled time of the burial.
The funeral cortege started from Joseph’s home in Bath Street, moved into the Market Place where it was joined by members of the Local Board and thence into South Street where teachers and pupils of the Sunday School joined. Now of over 250 persons, the procession stopped at the Wesleyan Chapel, also in South Street, for the funeral service — the chapel with drawn blinds and lit by gas producing a ‘dim religious light’ — before moving on to the General Cemetery in Stanton Road,  past many shops closed as a mark of respect.
Joseph was buried close to his brother Samuel.

“There were seven children.” ( in fact the couple had nine children.)

Elizabeth Ann married lace and needle maker William Tatham in September 1875, he being the son of needlemaker Amos and Eliza (nee Bell). The couple went to live in Stanley Street and she died there, at Stanley House, in 1933. (Stanley House was close to The Elms where William’s mother Eliza Tatham had resided).

Eliza Jane married in 1884 to George Porter Jackson, grocer’s assistant. (Had he worked for her father?).

George later had his own grocery business in Bath Street and at the end of the century his family was also living in Stanley Street.

William Henry married Matilda, eldest child of Bath Street clothier John Lowe Moss and Elizabeth (nee Barker), in July 1888. He was the owner of Henry Carrier and Sons, hosiery manufacturers, when he died in 1901, aged 41, and was then living at Uplands House in Burr Lane.

Joseph junior worked in the family grocery business and lived in Bath Street.

Samuel died of scarlatina during an outbreak of the disease in February 1868, aged five.

Henry Percy worked in the lace industry. He married Ada Sarah Hall in 1890.

The assistants in the grocery shop were …

Thomas (Dodson) Fritchley, son of farmer and butcher William and Ann (nee Dodson) whom we met living in Bath Street and then in New Street. He was first employed by Joseph Carrier about 1849 and was later the manager of the grocery section. He married his first cousin Sarah Fritchley, daughter of Richard and Hannah (nee Wheatley) in May 1869 and lived close by his place of work before moving into Station Road.

Enoch Carrier whom we met also in New Street.

William (Henry) Hithersay, son of John and Eleanor (nee Eminson), who in August 1859 married Ann Stevens from Mapperley, daughter of Thomas and Elizabeth (nee Mart).
After the birth of their tenth child Edith, in December 1877, Ann Hithersay seems to have suffered from post-natal depression and in early January 1878 twice tried unsuccessfully to take her life.
As a precaution Ann was put under the care of next-door neighbour and nurse, Elizabeth Lee, who agreed to sit  and keep an eye on her patient. Elizabeth’s company appeared to revive Ann who then seemed much improved in spirit such that the nurse felt increasingly confident in leaving her.
At 2am on Sunday January 6th William Henry awoke to discover that his wife was not in bed. An immediate search was organised by members of the family and local residents. William Lee, husband of nurse Elizabeth, and seventeen-year old Arthur William Hithersay, the eldest child, discovered Ann, drowned in a pond, in a field about 200 yards from her Nottingham Road home, near the Kensington chapel. She was wearing only her nightdress and would have to have crossed the road, a field and a stile before reaching the pond.
Ann was 39 years old and left her husband with eight children.

In later life he traded as a stationer, bookseller and newsagent at 20 North Street and died there on June 4th 1896, aged 61.

and, in the drapery …

Thomas (Henry) Small … we shall meet him very shortly at the corner of Bath Street and East Street.
“In my mind’s eye, I can still see Thomas Small, standing at the door of the old draper’s shop, ‘nodding’ good morning to everyone who goes by”. (A 40 year’s resident, Pioneer 1900)

Kimberley-born Henry Coxon was a son of cordwainer John and Elizabeth (nee Goulder).
He came to Ilkeston in the 1850’s and was employed as a shopman in the Carrier drapery department.
In November 1866 the Derby Mercury was convinced that Henry had just avoided a fatal accident when he was assisting at the back of the shop to push a waggon back into a shed. Henry decided that he might be better employed in pulling the waggon and so went around to the other end. What he didn’t account for was the slight incline in the shed floor and soon the cart was rolling towards him, crushing his head against the wall and piercing his temple. The newspaper reported that his condition was now improving ‘though he is not yet out of danger’.
In August 1867 he married Jane Mitchell, youngest child of South Street cordwainer Abraham and Ann (nee Campbell).
In November 1875, after 22 years as assistant to Joseph Carrier, Henry started his own business at 97 Bath Street – London House — the premises of recently deceased draper and grocer John Beardsley.
But by 1882 he seems to be working as assistant shopman once more, this time to Elijah Higgitt at 9 Bath Street.
In the latter years of the century the Coxons settled in Chapel Street.
And in December 1897 the Derby Mercury was again raising concerns about the well-being of Henry. He had taken the 11.45 pm train from Ilkeston to Sandiacre and got off at the station there, where he was refused permission to stay that night. He then disappeared. ‘No further trace of him has been discovered, and it is feared that he has been drowned somewhere in the neighbourhood’.
But he wasn’t drowned.
The 1901 census locates Henry at the Borough Asylum in Mapperley, Nottingham where he is recorded as ‘lunatic’.
The same census shows his wife Jane at 134 Chapel Street and described as ‘feeble minded’.
Her sister Sarah, living with Jane, is a ’cripple from childhood’.
The 1911 census shows Henry still at the Asylum and I believe that he died there in 1916.

It seemed a badge of some status in Ilkeston’s retail business —  something to highlight in one’s C.V. — if one could claim to have previously been an assistant to draper Joseph Carrier.

Let us just take stock of where we now are