First, a little bit of family history about this part of Burr Lane …
Joseph Knighton married his second wife, Mary Jackson, on January 12th, 1807 at St. Mary’s Church, Ilkeston.
Mary was the oldest daughter of Ilkeston victualler William Jackson and Ann Joanna (nee Battille), the father being the landlord at the King’s Head in the Market Place until his death in 1811.
Mary’s sisters were Ellen (who married Ralph Buckland, miller of Dale Abbey in 1804), Anna Joanna, Catherine (who married Ilkeston grocer and corn dealer Thomas Marshall in 1813), Sarah, Isabella, and Lydia (who married George Harrison, miller of Radford, Nottingham in 1816).
When Joseph Knighton died, childless, in 1812 he left much of his estate to his wife Mary, some of it being premises in this part of Burr Lane. 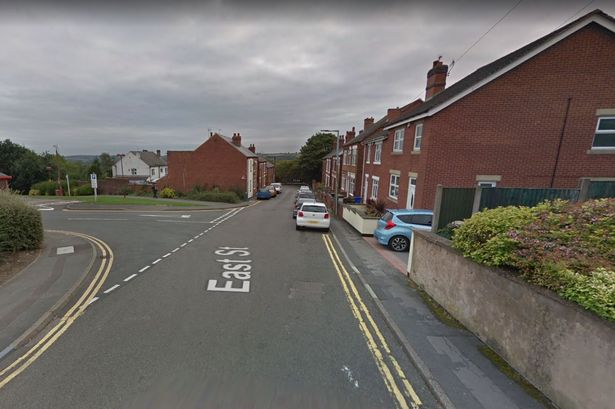 In the photo above, Joseph Knighton’s properties would be located on the north side (left) of East Street (or Burr Lane as this part of East Street was called in the first part of the nineteenth century). … that is, where the car park behind the Albion Centre now is.
There would be a few buildings where you see the car park entrance but there would be no houses standing up to the roadside, where they are today, either on the right or the left.

Below you can see part of the so-called Local Board Map of 1866, not the easiest map to look at. The top is north.
In the bottom left in the Unitarian Chapel, at the end of Anchor Row, marked as a dark block. On its east side is High Street (named), and as you walk up that street you come to East Street (not named) which runs from left to right until it takes a sharp north turn (middle top). You will notice that, directly opposite High Street’s junction with East Street (where the Sauna Parlour now stands, unless it has been pulled down !!) there is no building, no Gladstone Inn … it had not been built at its roadside location at this time. The range of buildings and fields located on the north side of East Street/Burr Lane are part of the Knighton estate.
Across the Knighton estate, to the left of Burr Lane where it turns northwards, you can see a diagonal path crossing the fields … this is the ‘Twitchel’ (see below). 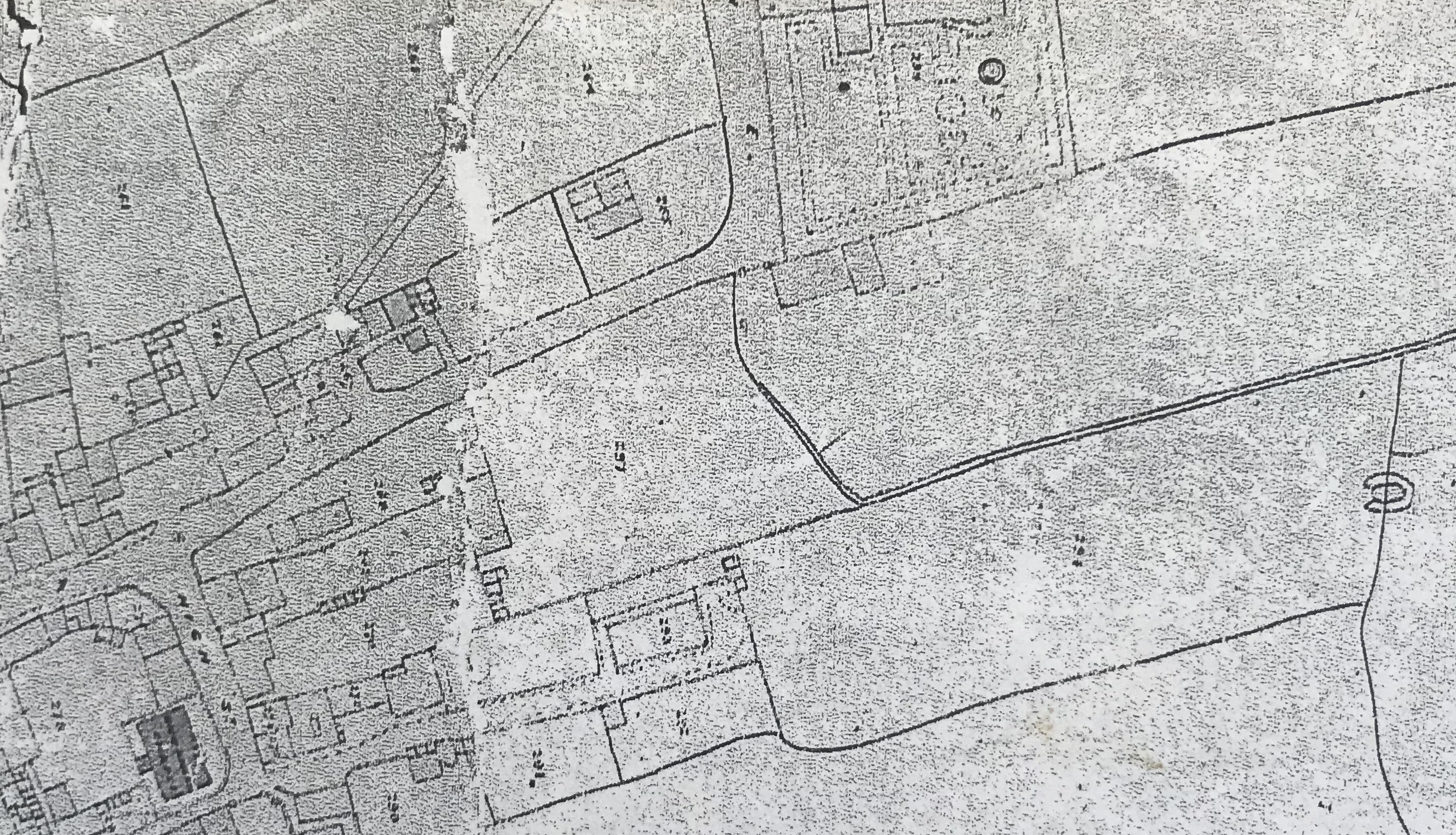 Mary Knighton (nee Jackson) died in 1833 and the estate passed to her legatees, several of whom were family members, including her sister Catherine Marshall, and William Buckland of Cotmanhay, son of Ralph (deceased) and thus nephew of Mary Knighton.
Catherine Marshall’s husband, Thomas, had died in 1845, and then in 1867 Catherine died at her Market Place home.
Consequently, Catherine’s interest in the estate passed to her son, Robert, who was the landlord of the White Lion Inn. And he now took steps to try to sell the Burr Lane property. In the Ilkeston Pioneer of  October 24th 1867 a notice appeared, announcing that ‘valuable copyhold land, public house, cottages and premises’ were for sale, the sale to be conducted at the White Lion in three weeks time.

To facilitate the sale, the estate was divided into 11 lots, to be sold separately. You can see them marked out on the sketch below. 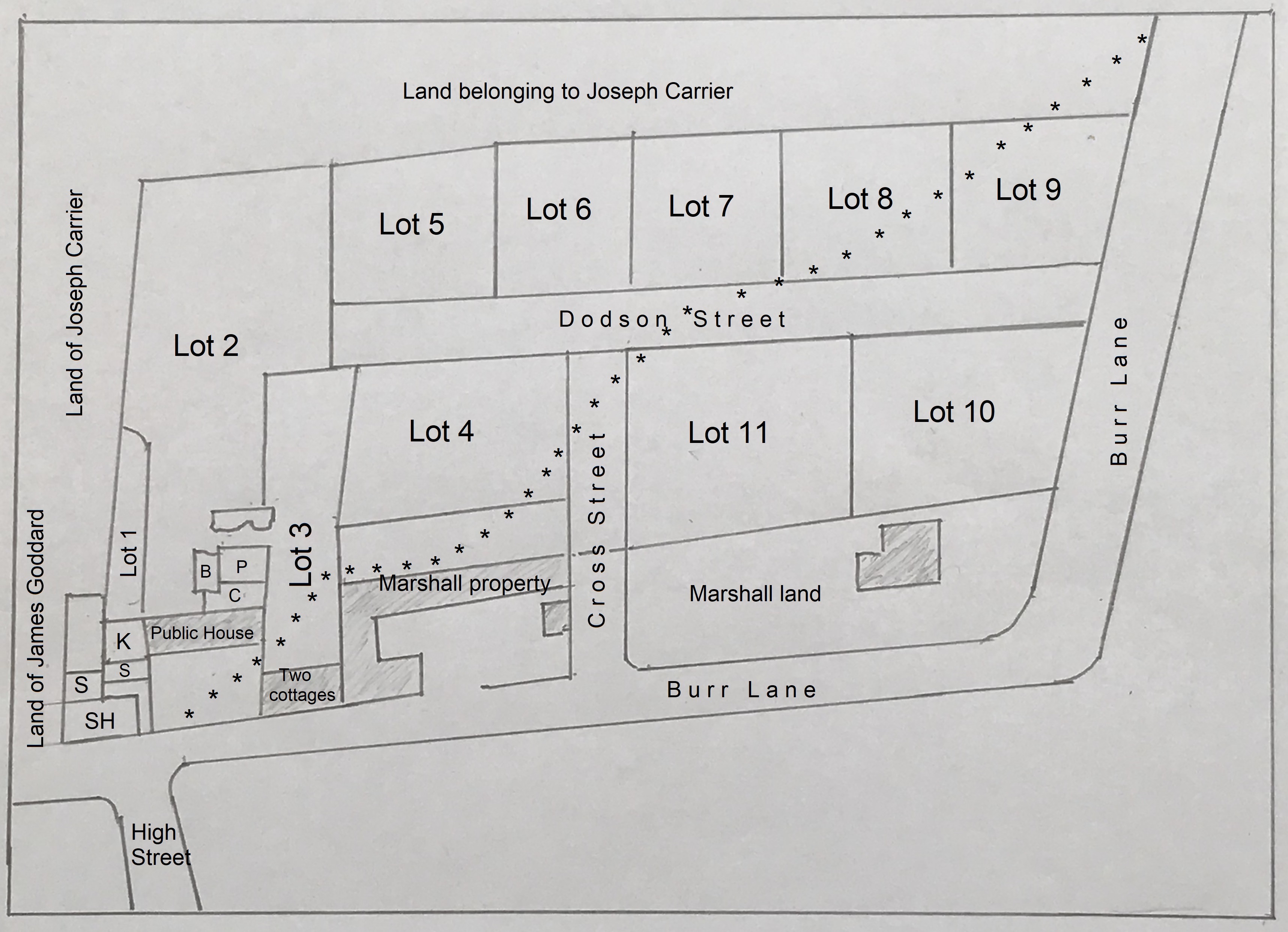 It should be noted that Dodson and Cross Streets were never built.

Lot 1 was bounded on the west by the properties of James Goddard and Joseph Carrier.
Lot 2, also bounded in part by land owned by Joseph Carrier, had within it a public house, cottage, brewhouse, piggery and other outbuildings, until recently occupied by James Warner. The purchaser of this lot would have the right of passage along the two new streets to be built … that is Cross Street and Dodson Street.
Lot 3 had within it two cottages, occupied by Lucy Walls and Mr. Barnes, and was bounded, in part, by property owned by Robert Marshall. The purchaser would also have right of way to the two new streets.
The remaining lots, 4 to 11, were described by their boundaries which you can see on the sketch.

It would appear that the sale was unsuccessful. In 1874 Robert Marshall enfranchised the whole of this area of land …  that is, he was granted the right to convert the land from copyhold into freehold.

Below is a section of the 1866 Local Board Map, annotated in line with the sketch above. The numbers 10-12 correspond with those on the East Street map and are the Meakin and Goddard premises. 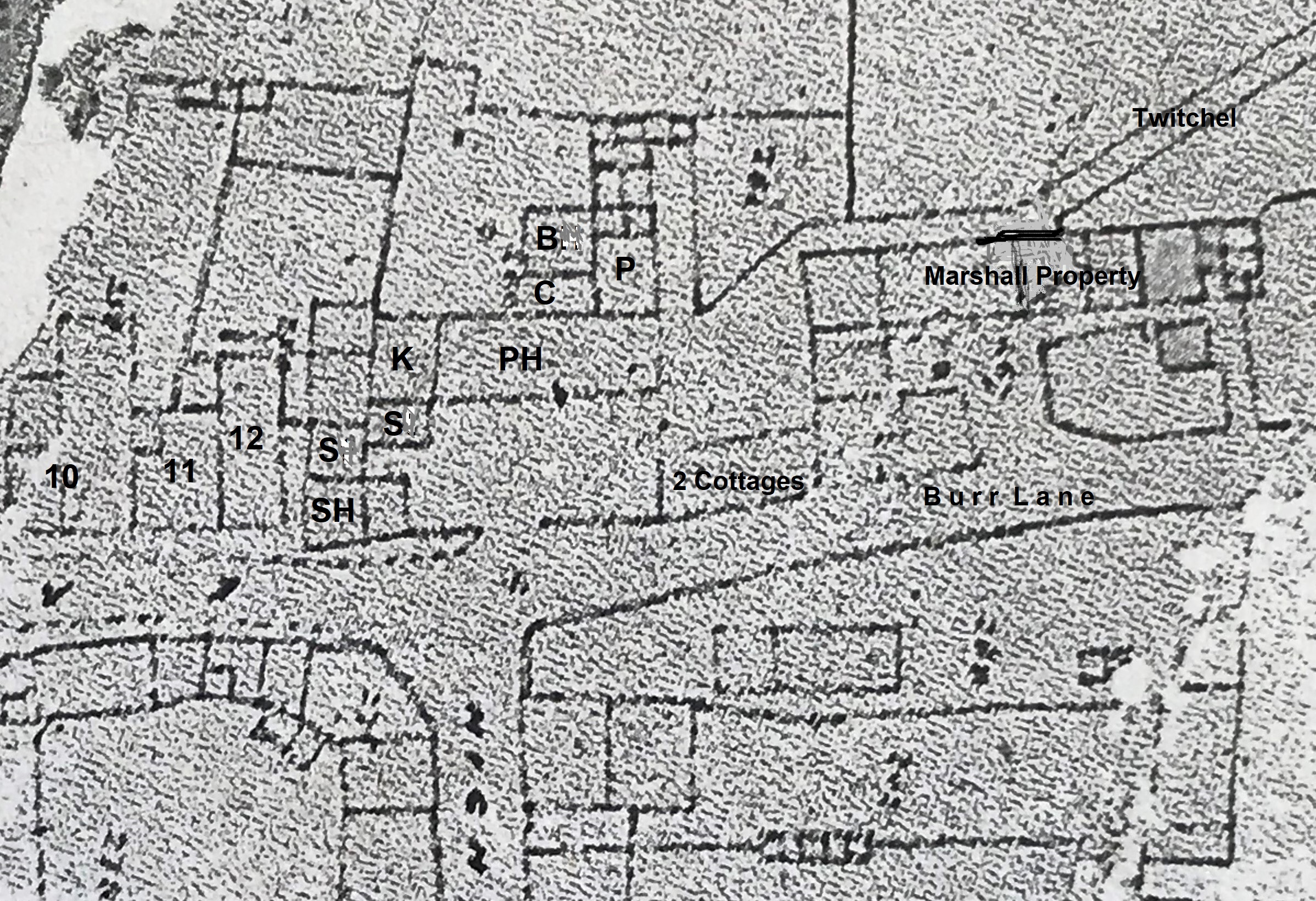 The map below shows the area as it appeared in about 1880. As you can see, the site of the Gladstone Inn had moved up to the roadside; the premises had been renewed and extended. 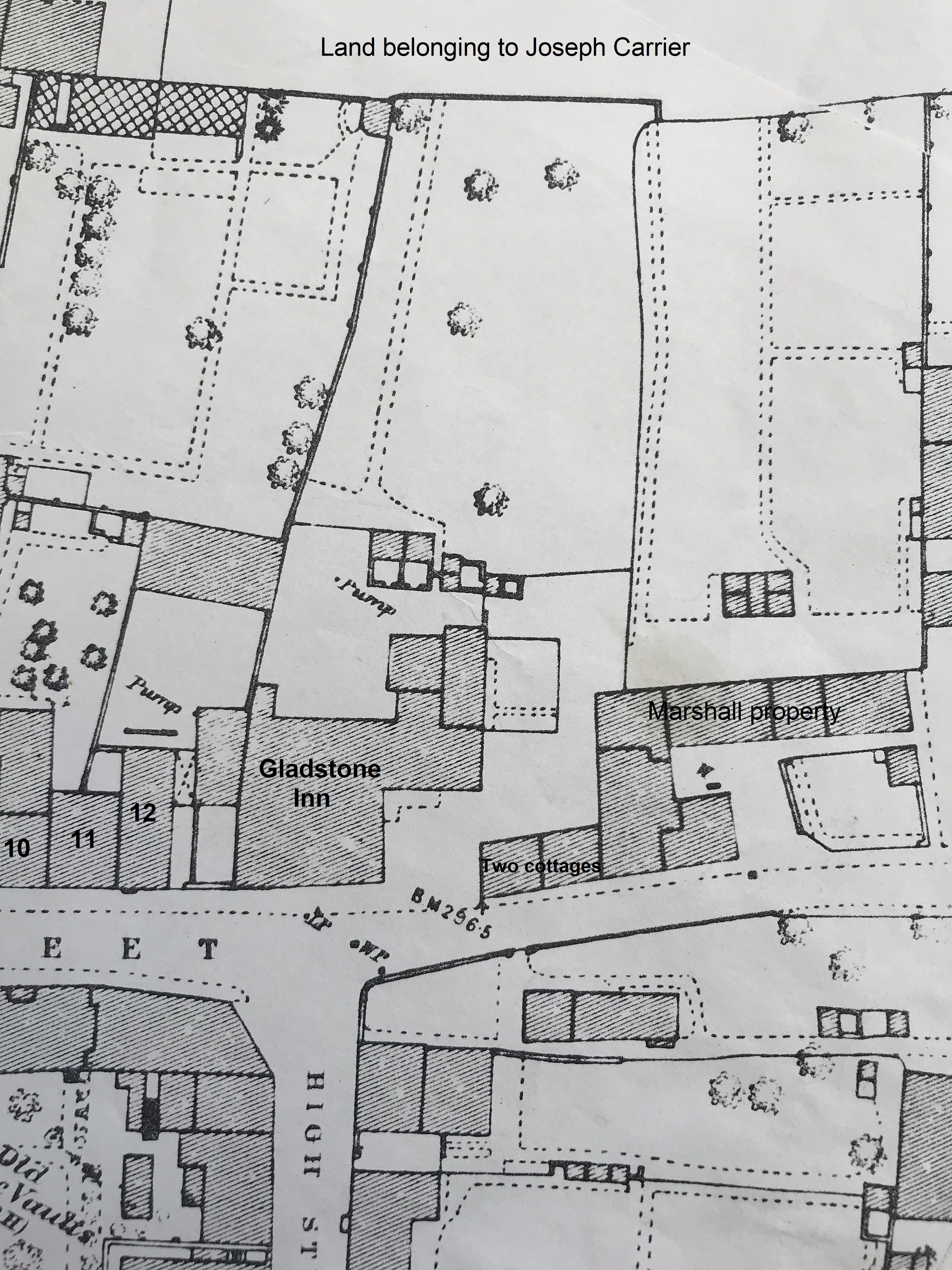 Adeline remembers  “A twitchel running through the gardens, came out opposite Dodson House”.

This twitchel was possibly Burr Lane Footpath which passed through the yard by the east side of James Warner’s public house and was designed to cut off the corner where East Street now joins Burr Lane. It ran from the north side of East Street, approximately opposite High Street, behind the houses on the north side of Burr Lane, through what were called the ‘Burr Lane Gardens’, to join Burr Lane as it turned to go northwards towards Albion Place. (see the sketch above)

As we have seen, in 1867 it was proposed to replace this path with a public highway and carriageway, about 24 feet in width. This new thoroughfare was to comprise two new streets, Cross Street and Dodson Street but they were never built.

Lower down Burr Lane on the right hand side was Mr. Robert Walker’s old house, it stood quite alone in a large garden.
He was the eldest son of Mrs. Walker sen., of Queen Street.

Robert Walker was the blacksmith son of Paul, shoemaker of the Market Place, and Eliza (nee Varley), and moved onto Burr Lane after his marriage in January 1854 to Eliza Attenborough, daughter of Joseph, farmer of Gilt Briggs Farm in Kimberley, and Ann (nee Buckland). She was the niece of publican Mark Attenborough and thus cousin to Isaac, his son, of the Sir John Warren Inn in the Market Place.
It was perhaps through his new Buckland connection that Robert moved into these burr lane premises.
After the death of his father, Robert’s mother could be found in Queen Street where she was living with her youngest son John and his family.
Robert later moved with his family into Stanton Road and died in June 1899, while wife Eliza died in July 1916.
Both were buried at the Parish Church in Kirk Hallam as was Eliza’s mother who died in June 1886, aged 89.

And a little further down the lane we meet the Brentnall family  ……………      or shall we go back to the Home Page ?