After the Clarkson, Tooth and Pickburn’s premises, according to Adeline we then see “gardens, facing Club Row, a few cottages on the bank,  (Field)
Next were steps leading up to Club Row Gardens and field. (The high bank with garden on it)”.

As today, there was a narrow alley leading from Bath Street up to the north end of Club Row. 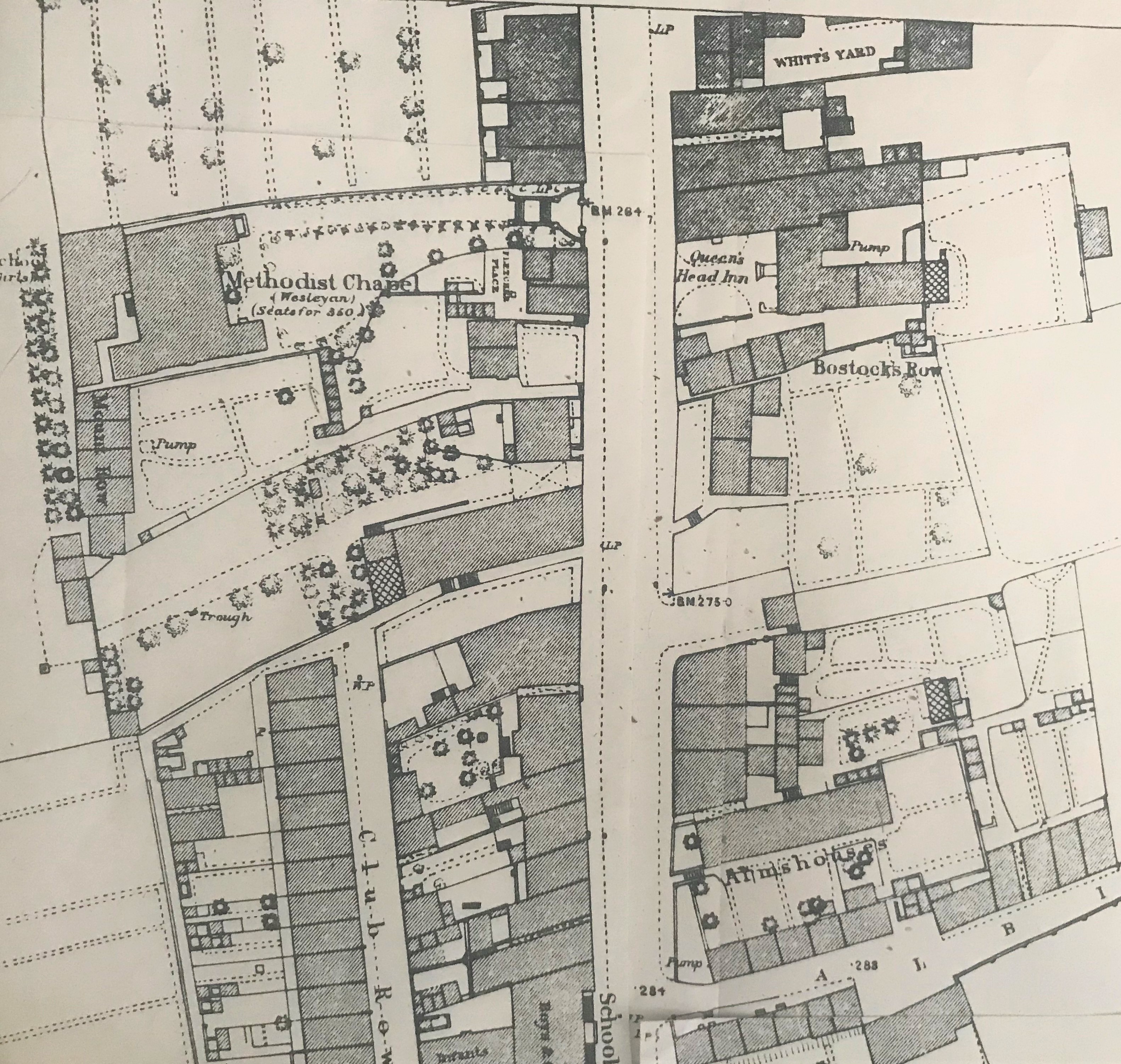 On the map above you can just see Bath Street running down the centre with the British School at the bottom.
The last houses of Club Row can be seen and there is the narrow alley leading from Bath Street to these houses’

“Next was a double-fronted house, standing back on the bank, with railings in front, and approached by several steps. This was occupied by a deaf and dumb photographer, Mr. Machin”. (Is this the double-fronted house on the map above, just below Fletcher Place ?)

Deaf from birth, artist and photographer Thomas Machin was born in Burslem, Staffordshire about 1808 and seems to have spent only a short time in Ilkeston in the late 1850’s before moving on to trade in Belper. 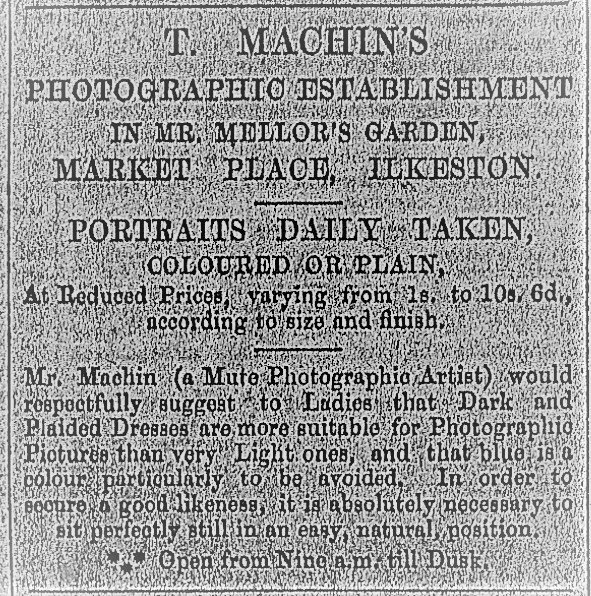 In 1858, his photographic establishment was in Mr. Mellor’s Garden in the Market Place … which was where Wharncliffe Road now is.

Thomas described himself as ‘a mute photographic artist’ who respectfully suggested to ladies that ‘dark and plaided dresses are more suitable for photographic pictures than light ones, and that blue is a colour particularly to be avoided’.

To achieve a good likeness it was most important to sit perfectly still, in a natural, easy position. 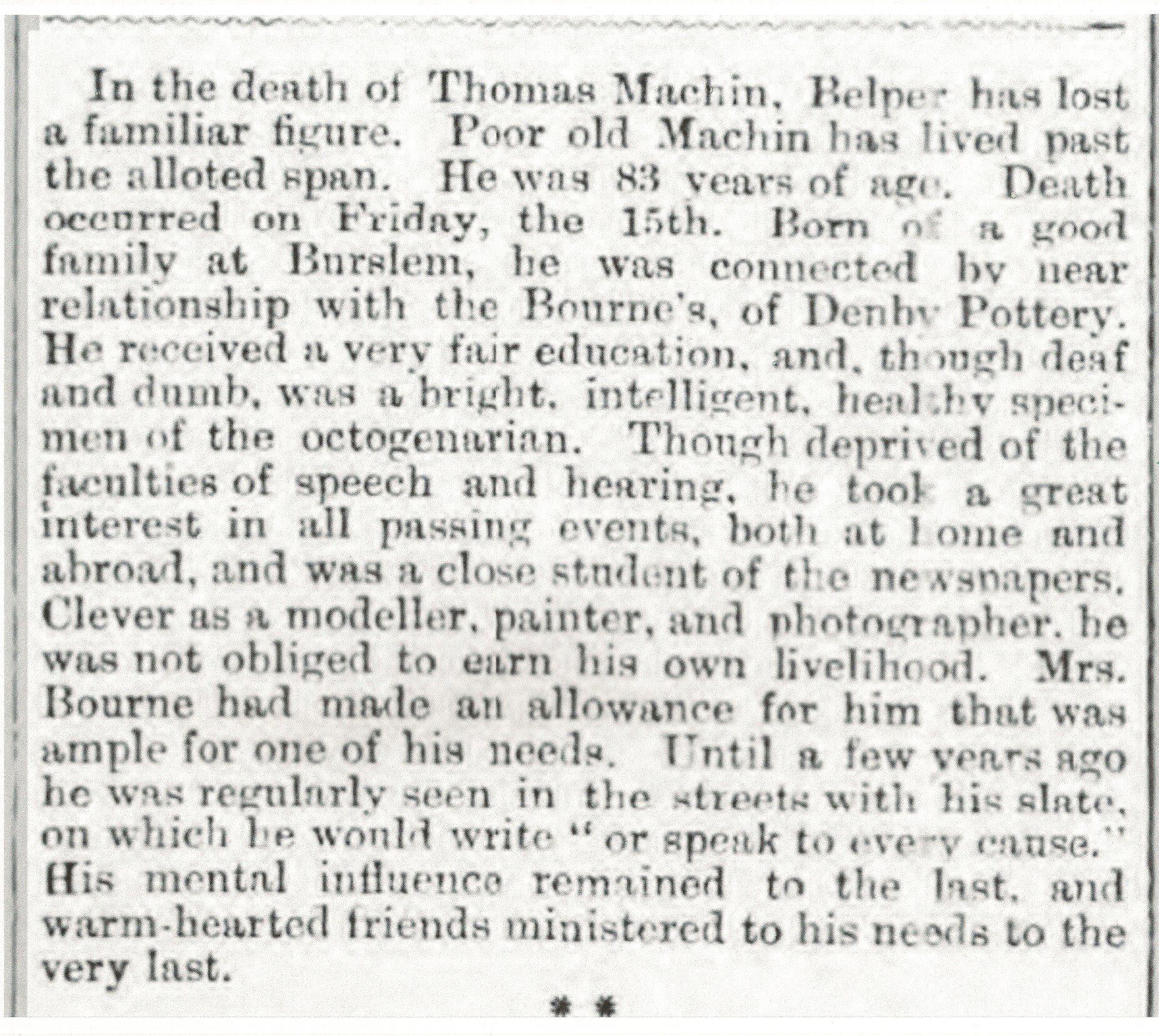 “(Thomas Machin) took two daguerreotypes of my parents, and they are as fresh today, as when taken in August, 1858.”

And recalling photographs of Adeline’s parents, I remember that a few years ago — when collecting material for this site — the curator of Erewash Museum allowed me access to their archives.
Lying on a stool in an upstairs room was a group of catalogued items waiting for filing, amongst them a photograph of an upright man standing beside a seated woman, both advanced in years.
The inscription on the reverse of the photo revealed that they were Adeline’s parents, “married at St. Peter’s Church, Mansfield, February 20th 1849, now residing at 6 Albert St., dated February 20th 1899”.
A Golden Wedding present?
Despite several returns to the archives and subsequent searches I never rediscovered the photo nor the name of the person who had donated it to the museum.

“Then came a narrow road leading up to two or three old cottages”.

These cottages were possibly those which formed Mount Row — not to be confused with Mount Street — situated a short distance north-west of the north end of Club Row, separated from the latter by open land and approached from Bath Street via a narrow alleyway.

On the map above, Mount Row is named and you can see the ‘narrow road’ from Bath Street to this row.

Macclesfield-born Ebenezer Pulcifer married Esther Cadman, daughter of William and Elizabeth (nee Sharman?) in 1844. There is evidence that the family lived in the Manchester area and then in Hull before moving to Nottingham in the 1860’s where Ebenezer traded as a hatter.

Wright’s Nottingham Directory of 1862 lists him as ‘bill poster and bellman’ of the Plough and Harrow Yard, Milton Street.
Ebenezer died there in 1865.

It was probably in the later 1850’s that the family lived in Ilkeston.
For evidence, Ebenezer was advertising in the Pioneer, July 1st,1858, as ‘Bell-Man, Bill Poster and ‘Pioneer’ and General Messenger, opposite the Queen’s Head, Bath Street’. (Advert right) 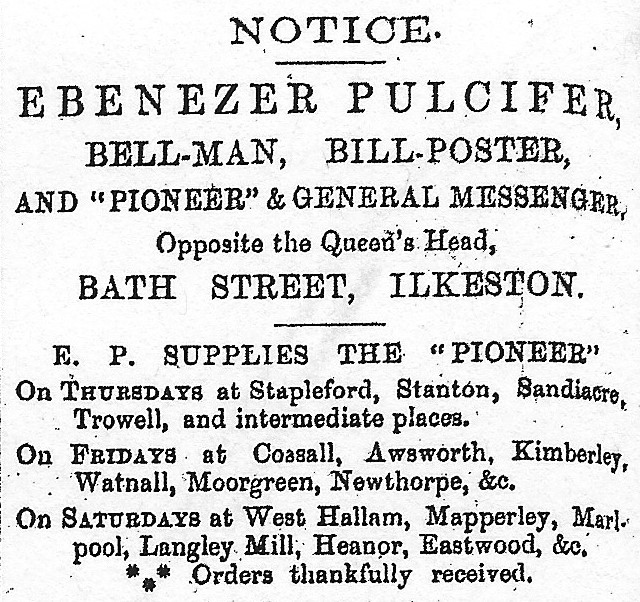 By the late 1860’s son Ebenezer junior was trading as a watch and clock manufacturer at 7 Sneinton Street and 57 Long Row in Nottingham, while also keeping a stall in the Market Place and at times visiting Ilkeston with his van, to auction his wares on its Market Place. And watches were not the only ‘wares’ that he sold!!

In June and July 1879 he was in Newark, Nottinghamshire, delivering lectures in favour of Republicanism, and found himself in front of the magistrates there after a series of disorderly melees during which Ebenzer pointed a loaded pistol. He was subsequently found guilty of inciting people to commit a breach of the peace and to damage property. For this he was bound over to keep the said peace for the next six months. But more was to follow!!
He was then charged with carrying a firearm without a licence; Ebenezer’s defence for this was that, as a hawker and gunsmith, he sold revolvers and so did not need such a licence. This time the magistrates were lenient with a light fine.
These events were referred to by some as ‘the Pulcifer Riots’!!

Six months later and ‘junior’ was in Market Harborough, Leicestershire, where more criminal ‘offences’ followed Ebenezer’s attempts to sell his goods in the highway. His actions and his language provoked the wrath of several residents, eggs were distributed and thrown, a revolver was brandished, and much of the local court’s time was spent in dealing with several cases following from these events. All resulted in fines and costs.

And two months after this, with his two assistants and trusty van, Ebenezer junior was in Kettering, Nothamptonshire, where he found a new method of attracting attention … ‘… by holding a singing match for young women. There were ten competitors, and the prize, an electro-plated tea service. After all had sung, the audience decided, by a show of hands, that the best singer was a young girl named Fowkes, a view that some musical critics in the crowd did not coincide in’. (NM)
This attraction did not stop Ebenezer from regaling the local populace with more uncomplimentary talks on contemporary politicians and the monarchy. Unfortunately, one evening while he was absent from the van, a paraffin lamp was overturned and soon only its wheels remained — the rest was ashes!!
The van had also contained seven or eight watches awaiting repair … ‘these, it is alleged, some persons in the crowd kindly appropriated to themselves’. (LC)
‘Pulcifer seems to be of a cantankerous disposition, for every place he visits he sets the town on fire’…. metaphorically and literally?!!

But many had a soft spot for him and were not averse to his views. Some of his ‘Radical admirers and sympathisers’ formed an ad-hoc committee to ‘obtain subscriptions’ from the local factory workers and general public — and considering that the hawker was a stranger to the town they were ‘wonderfully successful. Such that….‘on Saturday last, at a public meeting held on the Market-square, Mr. James Toseland, on behalf of the committee, presented Mr. E. Pulcifer with a van for travelling which had been purchased at an outlay of £25, being the voluntary contributions of 500 of the working classes of Kettering, as a token of sympathy in his loss by fire recently, and for his plain openness of expounding his political principles’. (NM March 1880)
It was reported that an audience of 1000 persons attended the ‘ceremony’.

“The large three-storey house with quaint windows facing Bath Street came next. At one time this was Mr. Tapley’s school for boys. Mr. Tapley had a school in Bath Street, where he gave his boys a classical, mathematical and commercial education. I did not hear of him after 1859″.

The Bath Street Tapley family had its origins in Kent.
In 1814 John Keate — or Keet — Tapley married Mary Bilding Coveney in Borden in that county, and the couple had several children there before moving to Dartford where John worked as a schoolmaster.
About 1850 the Tapleys moved to Reading, Berkshire and there John taught at a Day School in East Street.

However sons Albert, born in 1827, and Octavius, born 1829, had beaten the rest of the family to it.
Albert had married Somerset lass Sarah Pearce in 1851 and shortly after that they arrived in Ilkeston where, in 1853, Sarah gave birth to their son who died in infancy.
Around 1851 Albert and Octavius were ‘drapers of Ilkeston’ when in May 1852 their partnership was dissolved.

The Post Office Directory of 1855 has Albert trading as a ‘linendraper’  at Somerset House in Bath Street. Was this Adeline’s ‘large three-storey house with quaint windows’?
And by March 1858 Albert was insolvent.

By 1861 the couple had left Ilkeston to live in Somerset.

In 1858 father John was using the Pioneer to inform residents of Ilkeston that he had taken the house opposite the Post Office in Bath Street ‘to teach young gentlemen’. The family also kept a draper’s shop there.
Although Adeline cannot recall John after 1859, he does make an appearance in the Harrison, Harrod & Co. Directory of 1860 as a schoolmaster of Bath Street.
And the family is recorded at Bath Street in the 1861 census.
With John and Mary are their unmarried son Edwin and their grand-daughter Sarah Andrews, daughter of James and Ellen (nee Tapley).

When John died in Bath Street in October 1862 the rest of the family left Ilkeston to return to Dartford and it was perhaps at this time that the Rice family moved into the Bath Street residence — which in 1871 was number 21 Bath Street.

And here lived the Rice family.

By 1871 the family had moved to live in  Bath Street and had expanded, with children Isaiah, Catherine and Lydia, while daughter Hannah had died in November 1863, aged 2.

Eventually in the 1890’s Joseph and Catherine moved into Chapel Street East — later Lower Chapel Street — and both died while living there in 1897.

Which brings us to Fletcher’s factory and the Wesleyan Church, on the map above, and standing opposite the Queen’s Head Inn.