After the Rutland Arms … Adeline recalls that “at the bottom of Bath Street on the West side we come to Manor Road, in which was the Manor House.” And here we meet two very distinguished families bound together by marriage.

The Cockers and Taylors

The Manor house was formerly Cocker’s Farm — and was also known as Ilkeston Hall. 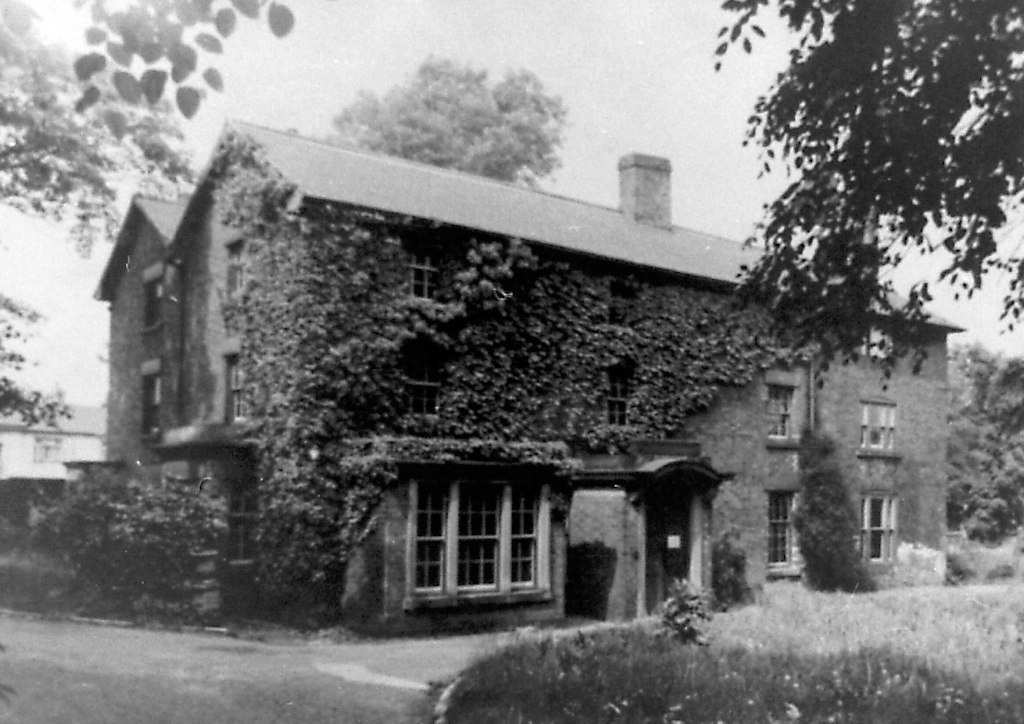 The Cockers came from Heanor about 1634 when nailer Richard Cocker bought a farm in Ilkeston from William and Eleanor Marshall. For some years the family made little impression on Ilkeston.
In 1658 George Cocker had an Ilkeston mill by the river Erewash.
The family later occupied the Manor House and had strong connections to the Unitarian Church in High Street.

A son of John Cocker and Hannah (nee Dovrale?), Isaac Cocker died in February 1849, aged 68, at Ilkeston Hall.
On the day of his burial, Shrove Tuesday, a performance of the ‘Messiah’ was held at the South Street Wesleyan Chapel as recalled by “Kensington”.
“Henry Farmer* conducted, and he was ably supported by George West, John Richardson, and an army of Goddards, Adcocks, Tilsons, Harrisons, Carriers, and others”.

*Henry Farmer (1819-1891) was an organist, composer and ‘Professor of Music’, born in Lenton, Nottingham … he has his own short Wikipedia page.

The Cockers have their family burial section in St. Mary’s Churchyard, at the east end of the Church. 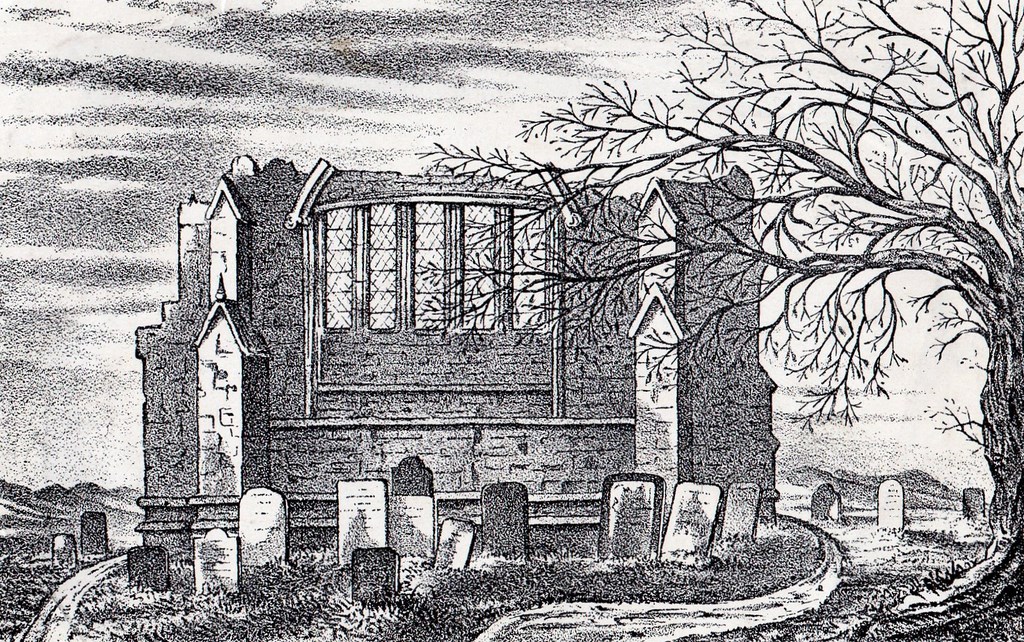 Above, the Cocker memorials at the east end of St. Mary’s Church in 1840.

And below, their memorials in 2022, though there are a couple more in the main graveyard 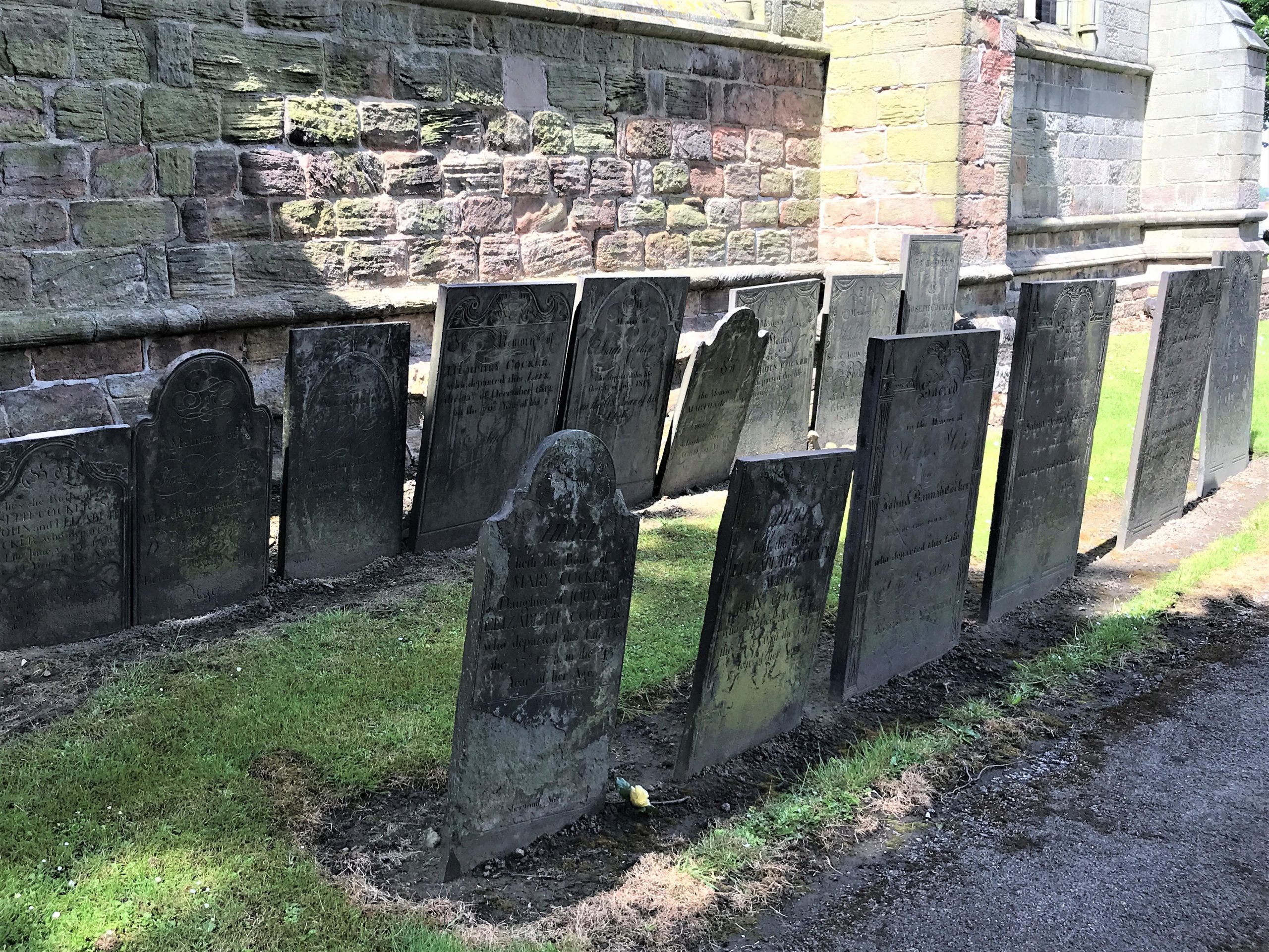 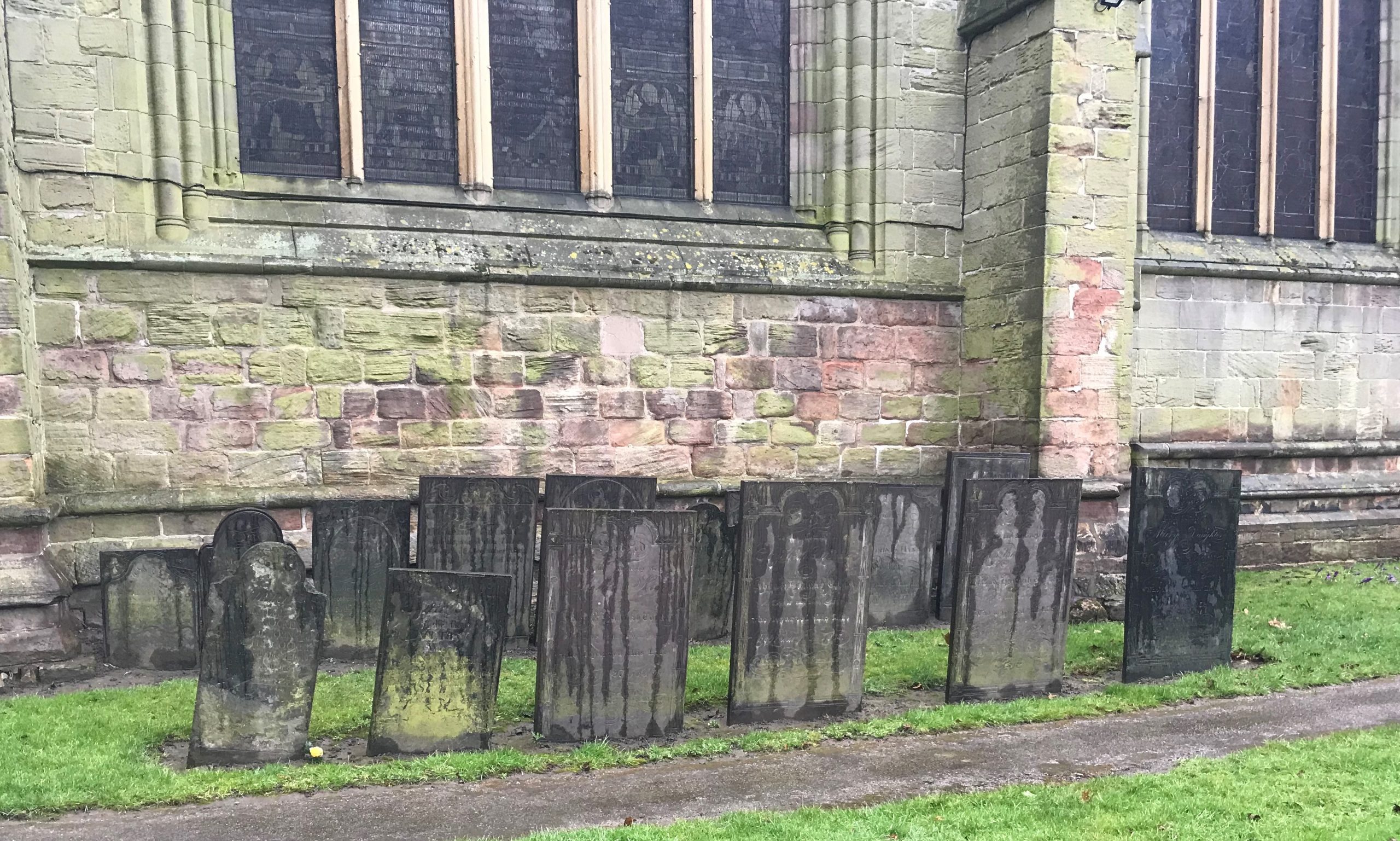 “The Manor House (was later) occupied by Mr. John Taylor, a gentleman farmer, his wife, son and daughter”

“The Taylors were often called the Cocker Taylors. Mrs. Taylor (Hannah Cocker) was the last of the Cocker Family.
Miss Taylor (probably daughter Mary Taylor) and her mother used to drive each morning in their pony carriage to their farm in Kirk Hallam. Mrs. Taylor always wore a velvet bandeau across her forehead.
After Mr. (John) Taylor’s death Mrs. (Hannah) Taylor and Miss (Mary) Taylor left the town, and so ended the line of Cockers”. (This sequence appears a little awry — see below)

John Taylor died at his Little Hallam farm on December 5th 1849, aged 79. However his wife Hannah had died at the same place before her husband, on November 18th 1838, aged 67. The couple had ten children between 1796 and 1819. The first one — son John — died in infancy. The only other son was John junior born in 1811. There were eight daughters, the oldest, Mary, remaining with her parents. Only after the death of both parents did Mary marry — on December 21st 1854, at the Independent Chapel in Pimlico, to Daventry farmer Joseph Burbidge. Mary died on August 1st 1867 at their home of Badby Cottage in Daventry — she was 69.

Born in 1811 ‘gentleman farmer’ John Taylor junior was the only surviving  son of John senior and Hannah (nee Cocker) and married Elizabeth Frearson of Sawley Grange, daughter of farmers William and Elizabeth on May 21st 1844 at Sawley Parish Church.

“The son (of John Taylor junior), John Cocker Taylor, who was fond of shooting, was out one day in heavy rain, he took a chill which developed into rheumatic fever from which he did not recover.
He was about sixteen years old when he died”.

John Cocker Taylor was the only son of John and Elizabeth and he died from ‘spinal meningitis’ at the Manor House on June 17th, 1867, aged 16.

“Young John and his sister, who was older, attended the British School when Mr. Holroyd was the head” — that would be from about 1856 to the end of 1862.

At the end of 1877 John Taylor junior put much of his farming stock up for sale at Manor Farm and left Ilkeston to live in Spondon with his wife and daughter Mary. He died there on October 19th 1892, aged 81, and his body was returned to Ilkeston to be buried, five days later, in the Stanton Road Cemetery.

In June 1878 builder Frederick Shaw moved into the Manor house, leaving behind his living premises at 109 Bath Street, between the premises of china dealer Richard Riley and the Alms Houses. He had been born in Ilkeston on April 23rd, 1833, the son of framework knitter William and Mary (nee Mather) and married Marina Matilda Hawley, daughter of butcher John and Mary (nee Burgin-Richardson), on June 11th, 1855.

By the late 1880s he had been in business for 30 years, then occupying an office and building yard in Rutland Street with a two-storied building, offices, stores, workshops, saw, planing, moulding and mortar mills, timber sheds and yards. He also had farming interests at his Manor Farm, adjacent to his home, at the bottom of Heanor Road.

Early in 1886 Frederick gave up the farming, selling all his cattle, horses, wagons, carts, mowers, reapers, ploughs, harrows, etc., etc.. The Manor farm of 200 acres of pasture and arable land, belonging to the Duke of Rutland, was to be divided into small allotments. The Duke already had over 1000 such garden allotments in the town. This was all part of the Duke’s ‘small allotment scheme’ to make small holdings available to cottagers and others in the town.

Close to the Gas Works in Rutland Street, Frederick had work premises which included a large two-storey brick building, 13 yards by 7 yards, used as a joiners’ shop and sawing shed, piled high with sheets of wood and finished doors and window frames. A flight of exterior wooden steps led to the upper storey and there was a wooden lean-to by the side of the main building, housing a sawing machine. On the other side there was an engine room with a steam boiler inside, and across the wood yard stood another long wooden shed, stocked with dry timber. About a dozen carpenters, joiners and sawyers worked there, among shafting and sawing machinery. You can see the potential danger if a fire broke out at the works …. which one did, on the evening of December 27th 1888.
The fire alarm was sounded and Frederick’s son William, rushed from his nearby home at the Manor House, to be greeted by an imense crowd of onlookers and a ‘raging inferno‘ which had already consumed the lean-to and had taken a hold in the main building. Ilkeston fire brigade had already been called but didn’t arrive for another hour !! —- by which time the whole of the building had been gutted, its walls collapsed. By 7 o’clock in the evening the fire had almost run its course and was being dampened down.
The engine shed and offices survived relatively untouched, in part thanks to the members of the assembled crowd; they had helped in moving timber to a safe place, carrying buckets of water, and working the fire engine. No-one was injured but an estimated £500 – £700 worth of damage was done — though the premises were insured, so Guardian Fire Office would be paying the bill ?
And did the whole episode prompt the Nottingham Journal to remark that it hoped that Ilkeston Corporation would institute a Fire-Brigade worthy of the public-spirited dreams of the Queen of the Erewash Valley ? (Dec 29th)

Frederick Shaw’s father had been born in Chilwell, Nottinghamshire, in 1796 and Frederick died at Chilwell House in Wilmot Street on June 13th 1895.

Frederick’s oldest surviving son was Frederick junior, born on June 27th 1859, and he, too, was a builder. On November 27th 1882 he married Adela Green of Sough Closes, Ilkeston, and almost exactly seven years later the couple were at the Divorce Division where Adela was petitioning for a dissolution of the marriage. The grounds were adultery and cruelty, both of which the court was satisfield had occurred. A decree nisi was granted; Adela left to live with her sister at Fenwick House in Park Avenue, with her spinster sister Sarah. She died at the residence of her nephew, the Rev. William Harold Green, on August 22nd 1926.

A ‘courting couple’ caught in the act

About half past three on Sunday afternoon, August 8th 1882, Frederick’s son William Edwin was out in his father’s wheat fields with Police-constable John Downing when they came across a ‘courting couple’ lying down in one field, beside a footpath. They were 18-year-old coalminer Ezekiel Ellis and 20-year-old factory worker Kezia Stevenson, who, less than a week later found themselves appearing at Ilkeston Petty Sessions, charged with wilfully damaging growing wheat, the damage amounting to about 1s.
At the time of the ‘offence’ neither realised that they were doing any harm, denying that they were in the wheat but rather on the grass at the side of the field.
Perhaps by now William Edwin was having second thoughts about the prosecution — he didn’t wish to press the case but had originally brought it to act as a deterrent to others. Each was ordered to pay 6d in damages, a 1s fine and 4s 3d costs.
Kezia was the illegitimate daughter of Sarah Stevenson and had lived with mother after her marriage to William Byer in 1869. Now, however, Kezia was with her aunt Alice White (nee Stevenson) and her husband William in Norman Street, and already had an illegitimate son, William, aged 1. In the next ten years, and living with Ezekiel, Kezia had a further six illegitimate children — until her ‘partner’ died in 1901.

And now for a short interlude at Jackson Avenue, before we venture out into the wilds of Cotmanhay