Adeline paints a picture of the street as she recalls it …..  “South Street was a little different to present time. It was so quiet that very often you could walk its entire length without meeting a single person.
“The vehicular traffic was a very limited affair. In those days we walked more as we had not a bus or charabanc to jump into if we wanted to go to the Dale, or any near-to village. Instead of motor-cars, motor-cycles, or even the ordinary bicycle, we had gigs, dog-carts, coal-carts, and occasionally a four-wheel carriage. Whitehead Bros. had carrier carts. But Cope was not in evidence until later”.

In the Summer of 1876, when the pavement of this street was being repaired, the Local Board acceded to a request from the Ilkeston Floral Society to recycle the causeway stones and use them to make a footpath down Pimlico towards the new Recreation Ground.

Adeline remembers that “the first shop in South Street was occupied by Mr. John Mellor, butcher. He was a bachelor. He had a large garden, and in the season, always had a quantity of apples for sale in his shop.
The shop stood on what is now Wharncliffe Road.
One day I went with a message and he asked me if I would like some apples and told me to fill my pocket. When I had done so, he said, ‘Suppose we weigh those apples’. I placed them on the scale, and they weighed a quarter of a peck. He looked at me and said, ‘That is a very useful pocket, Adeline! ‘When I told my mother, she laughed and said ‘Mr. Mellor will not ask you to have any more apples’.
He did ask me to have more, but he never again told me to fill my pocket.

Born in October 1811, John Mellor was the oldest surviving son of lacemaker William and Rhoda (nee Palmer), and lived all his adult life at the house in South Street/Market Place.
He was apprentice to Thomas Critchley, butcher of Ilkeston, before establishing his own business about 1835.

“His niece, Miss Bates, was his housekeeper”.

John’s younger sister Mary married cordwainer John Bates in March 1837 and it was their daughter Frances who was John’s housekeeper for many years, even after she married cab driver and horse keeper George Hackett in 1888. 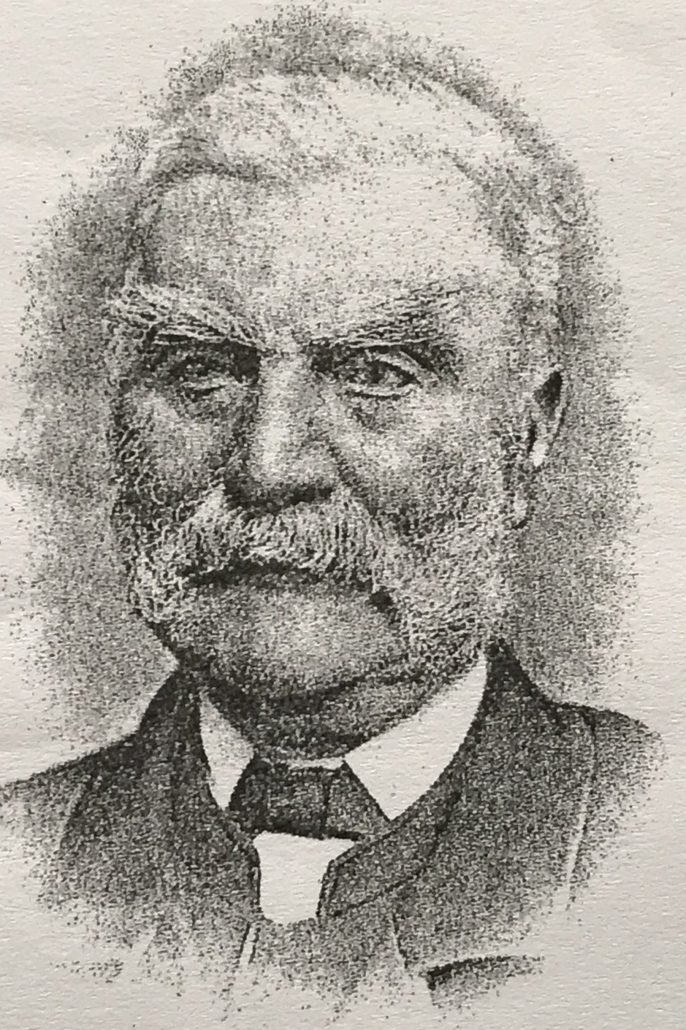 John Mellor retired in 1881, died on November 30th 1892 and was buried in Stanton Road Cemetery.

And yet another sister, Martha, married Samuel Richards, grocer of Cotmanhay Road, in October 1853.
The latter was elected as Mayor of Ilkeston in 1896 and 1897, in which year he attended the Diamond Jubilee celebrations of Queen Victoria at BuckinghamPalace.

The youngest of the family, Eliza, was the first wife of Solomon Beardsley, the Bath Street baker.

At the end of 1865, attached to the Mellor’s premises, was opened the Ilkeston branch of the Nottingham Joint Stock Bank (Limited).
Its business hours were 11 am to 3 pm.
On deposits requiring seven days notice of withdrawal, it paid 4½% interest — (six months later this had risen to 5½% and a couple of months later was 3½%).
On small deposits of £1 and upwards, without notice of withdrawal, 3% interest was paid.
The first manager of the branch was John H Ryland, who in 1866 was chosen to serve as the sole treasurer for the Local Board.
The branch was to play a significant part in a case of mistaken identity a very short time after its opening.

The school cottage – at 65 South Street — was at one time tenanted by William Frost, who arrived at Ilkeston about 1870 and for many years was headmaster of the Boys’ National School in Ilkeston.(1870-1895). He was the son of Edward and Joanna (nee Bearman) of Halstead in Essex.

In 1874 the Pioneer was trumpeting the success of the National (Church) Boys’ School in the Market Place and William’s role in this.
“The parishioners generally will be glad to learn that these schools continue to maintain their high character as a means of education for the youth of Ilkeston. It is also satisfactory to be able to note that during the year the debt on the schools has been reduced from £40 to £13, and to add that on receipt of the Government grants, the treasurer will be financially on the ‘right side’. Much of this success is undoubtedly due to the master, whose certificate has been endorsed by Her Majesty’s Inspector of Schools (who made his annual examination this month) in the following favourable terms: — ‘The condition of the school reflects great credit on Mr. Frost’s diligence and skill’’.

In the following year the school moved from the Market Place to new buildings in the Cricket Ground, (see St. Mary’s Schools.)

In 1908 Sheddie Kyme recalled William Frost as …
“all that could be desired as a schoolmaster, and at times… perhaps more.
“He was, I believe, constitutionally weak, but, as I told him once when having a conversation with him, some years ago, he always had a strong arm.
‘Yes, all my old boys tell me that’, he said.
Mr. Frost took infinite pains with his scholars, however, and if he did not get the best out of them, it was not his fault.
He seemed to labour under the impression that …
“When house and land and money’s spent,
Then learning is most excellent”.
“There is, of course a limit to the patience of a schoolmaster, and when any boy by his refractory conduct exhausted that patience, he would find Mr. Frost equal to the occasion.
‘I’ll— teach— you— better!’ he would say, with a little emphasis on the last word, and extra pressure on the last stroke of the cane. I can see him now….with the beads of perspiration standing on his forehead, as he administered punishment to a boy for telling a lie.
“A scholar during play, had divested himself of jacket and waistcoat, and some mischievous urchin had deposited them over the school wall, where they were afterwards found by one of the teachers. Hence the boy had to make his appearance in school without them, which caused some little amusement.
“Three boys were suspected, brought before the whole school, and subjected to a cross-examination. The first two came through the ordeal successfully, but the third was not so fortunate. The cross-examination proceeded something like this:
‘Did you see this boy’s clothes in the playground?’
‘No sir’.
‘Then you did not throw them over the wall?’
‘No sir’.
‘You are quite sure?’
‘Yes sir’.
‘Now, which did you throw over first, the jacket or the waistcoat?’
‘The waistcoat, sir’
“That did it. The scholars were convulsed with laughter, and if that boy did not take his meals standing for the next day or so, it must have been strange indeed”.

In December 1876 William married Paulina Octavia Gray, nine months after the death of his first wife Lucy (nee Canal). By this time he had fathered at least eight children.

At her marriage Paulina gave her age as 22 and her father’s name as Francis Gray, a mariner. However if the 1851 census return is accurate, her mother Elizabeth (nee Munns) was a widow by that year, over three years before Paulina’s birth.
And four years after Paulina’s birth, her mother Elizabeth married her second husband, James Theodore Whitehouse, also a seaman.
By 1871 Elizabeth was a widow once more.
In the early 1870’s she came to live at West Hallam where she was employed as a laundress, as she had been for most of her working life. With her were Paulina and the latter’s half-sister Susan Emily Whitehouse, also a laundress.

Paulina was a schoolmistress at Kirk Hallam and as a leaving present, just after her marriage, the parents there organised a testimonial for her and bought a china tea-service. Unfortunately she could not attend the scheduled presentation as her husband was ill !! 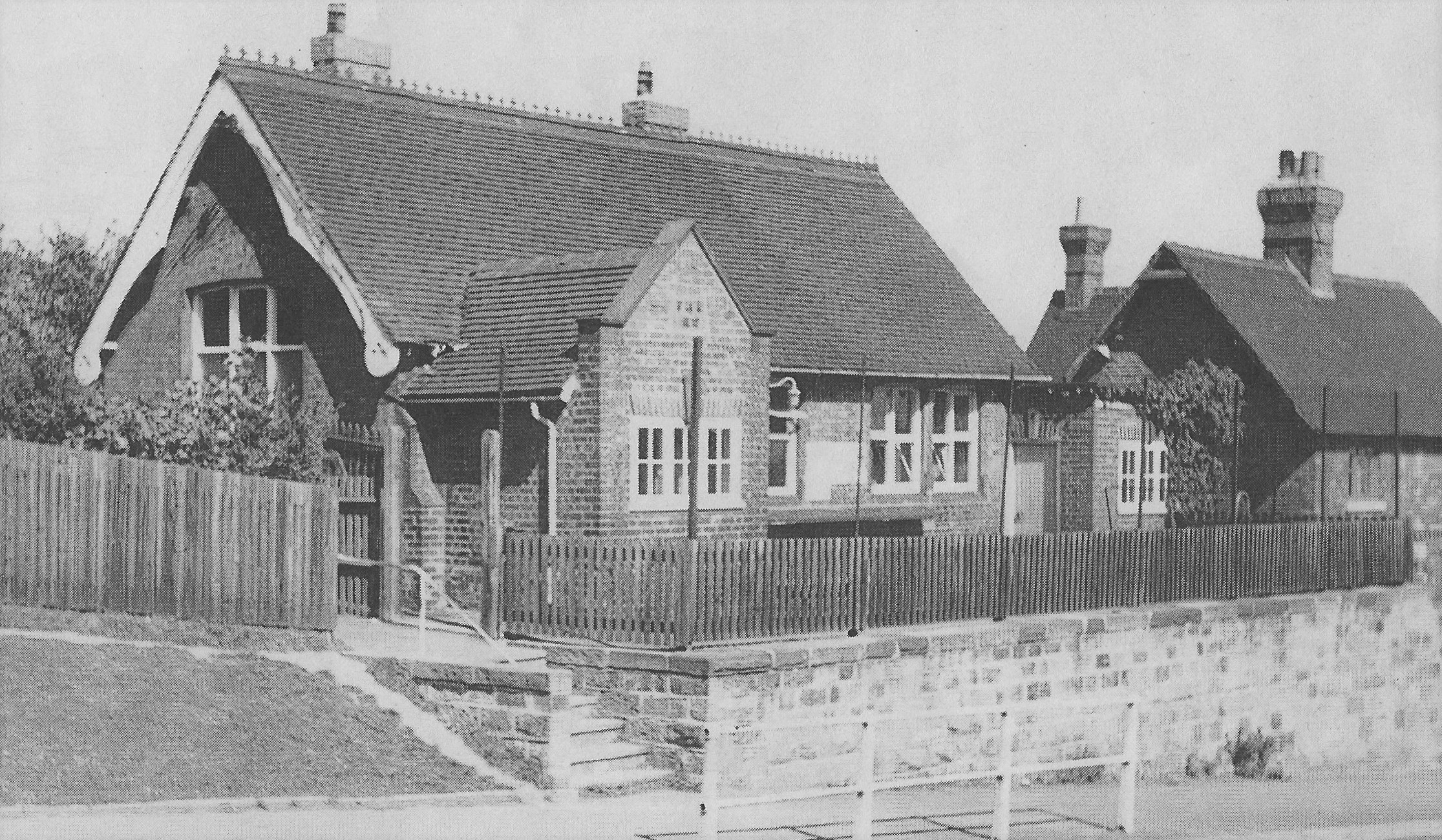 The Kirk Hallam Church of England School on Ladywood Road, built in 1872, enlarged in 1898.

After this Paulina taught at the National School in Ilkeston and at her retirement had spent 40 years in the teaching profession.

Anything but quiet !!!
Here we are at the Market Place celebrations for Queen Victoria’s Diamond Jubilee in 1897. Look at the row of buildings, starting right, and you will recognise the facade of the Town Hall. Then there are two buildings later demolished to make way for Wharncliffe Road, and then the Ilkeston Post Office … the sign between the upper two windows reads “Potts” … we shall meet the postmaster Charles Potts very shortly. Then there is an alleyway, leading to Ball’s Yard. Follow the roof line and you will see the prominent outline of the South Street Sunday Schoolrooms.

Both John Mellor’s shop and the schoolmaster’s cottage were demolished in 1898 to make way for Wharncliffe Road. However the next shop was not demolished.