After the Burr Lane Brentnalls …. 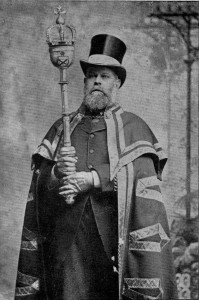 Hannah Rawdin was the youngest child, born in 1837. She had an illegitimate son, John Barker Brown born in 1855 before, in August 1857, she married lacemaker Emanuel ‘Man’ Barker of Awsworth Road, son of brewer and innkeeper at the Bridge Inn, John and Sarah (nee Smallwood). After the death of his father in 1888, ‘Man’ became proprietor of the Inn and died there in 1906. Hannah had also died there, in August 1899, aged 63. Hannah’s illegitimate son adopted the surname Barker and was married under that name on Christmas Day of 1879, giving his father as ‘Emmanuel Barker’. His bride was Lucy Canal Frost, eldest child of National schoolmaster William of the Market Place, and Lucy (nee Canal).
Homeless in Ilkeston
It was approaching 11.30 pm on a late September night in 1891 and Achilles Rawdin Brown junior, only son of Achilles Rawdin Brown senior, was ready for bed, when he heard a knock at the door of their Burr Lane home. Upon answering it, he saw neighbour Ernall Brentnall standing there, somewhat agitated and seeking assistance. Ernall had just discovered a vagrant in his front yard, on his hands and knees, with a jacket over his head. He had tried to move the man but realised that he couldn't do this on his own. And so, accompanied by Achilles, he managed to  carry the man across the road on to some waste land. Achilles senior was then called by his son and his expert medical assessment that the man was close to death alarmed Ernall, who sped off to fetch the police. P.C. William James Lipscomb arrived shortly after midnight, noted the extreme plight of the vagrant, loaded him onto a handcart and took him to the Town Hall lock-up in the Market Place. Soon after this, Dr. Wood attended the man but found him 'quite dead', his demise caused by 'destitution, exposure and general neglect'. He had 1s 2d on him, some bread and cheese wrapped in paper, and a bit of an old comb; he was clothed in ragged trousers, two waistcoats but no shirt, but was completely covered ... in vermin !! By the time of the inquest the next day, the identity of the deceased had been established. He was 48-year-old John Thomas Glossop, an unmarried painter, born, and living all his life, in Ilkeston. His deceased father John had for many years traded as a currier in the town, at one time using a shop close to Mount Street. His youngest sister, Elizabeth Ann, had married Cotmanhay coalminer Ezekiel Sisson in 1874 and in recent times had lost touch with her brother ... even though both never moved out of the town. A few days earlier an old acquaintance, widow Sarah Ann Shaw (nee Calladine) of Station Road, had written a letter for John Thomas, addressed to another sister, Ellen Maria Clarke, at Matlock, pleading with her to come to Ilkeston to rescue him from his destitution and debts. The widow paid for his penny stamp, gave him 8d and some tea ... but he was too filthy to let into her house !! And if the letter reached Ellen Maria it was unfortunately too late to save her brother.

This finished the houses on the East Side of Burr Lane, there were no more buildings until you came to Albion Place. …..
and the Ball family.