We have now walked out of (modern-day) East Street and round the corner into Burr Lane. We are about to meet the Brentnall, Brown and Ball families of this lane. In November 1865 the Ilkeston Pioneer thought that at least two of them were worthy of an extended article, under the title “ILKESTON AND THE MAYORS … a flattering coincidence”.

In the town of Ilkeston there is a neighbourhood, a little way from its centre, called “Burr Lane”. In this lane two families lived, not more than fifty yards apart, for sixty years, They were thoroughly neighbourly. The intimacy of their mothers began before they were married, and only terminated with their death, which was at an advanced age, about two years ago, both their husbands being dead some years before. The names of these families being Brentnall and Ball.

The father of Francis Ball, also named Francis, was instrumental in establishing the Independent Chapel in Ilkeston.

The families were quite up to the average number; Brentnall’s coming just up to old Jacob’s count, and Ball’s to one fourth less (?) Both were fairly adapted by sexual division to carry out the old command, “Multiply and replenish the earth,” only allowing an exceptional coincidence in the most distinguished son in each family; they cannot take as their own, all the autority and affection that belongs to the word father.

Some twenty years since, or more, several of the Brentnalls journeyed towards the north; and Thomas, the most promising and prosperous, was chosen Mayor of Middlesborough three years ago. Thomas Ball, who, with the rest oif his family, have never wandered far from the place of his nativity, is this year appointed Mayor of Nottingham. Thus the town of Ilkeston, which, for its size, could not find room for the sphere of mayoralty within its limits, has furnished a mayor for one of the boroughs in Yorkshire, and one for the county town of Nottingham, and both of them have sprung from that little unpretending spot (which for many years was peopled by the two families). Burr Lane.

In you examine the 1841 census, you will find Thomas Brentnall, with his younger bother Henry, his sister-in-law Hannah (wife of Elijah) and his nieces and nephews (children of brother Elijah and Hannah) at Garden Cottage, Brick Yard, Middlesborough. Both he and Henry are described as ‘masons’. An early association with the North-East, but why ?

Walking down Burr Lane, beyond the Knighton estate, Adeline now introduces us to a family she knew well, through her chapel ….

A distance further down (Burr Lane) on the East Side were two cottages.

In the first lived Mr. and Mrs. Brentnall, their son William, and daughter Sarah Ann.

Mr. Brentnall was a machinist at Ball’s.

The daughter was a dressmaker”. 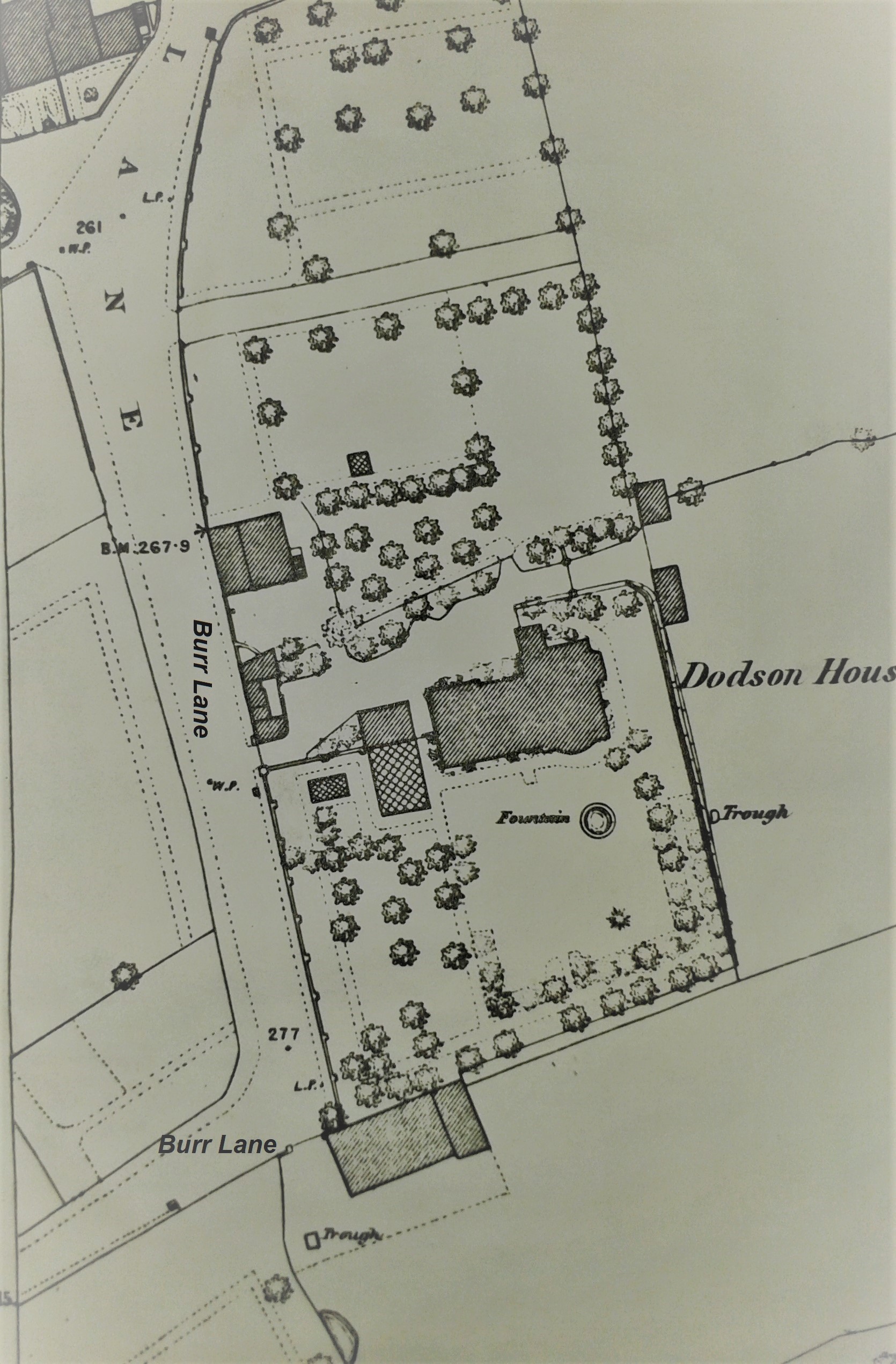 James and Elizabeth lived all their married life in the Burr Lane area and died there, James on September 20th, 1875, aged 57, and Elizabeth on May 18th, 1882, aged 70. Both were buried in the Stanton Road Cemetery.

Some aspects of the domestic life of their son Herbert Thomas are ‘unusual’.

At St. Mary’s Church, Ilkeston, in September 1859 he married Alice Allen, sister of Beatrice (the wife of Enoch Carrier) whom we met in New Street. The couple had several children, including twins, who all died in infancy before three sons were added to the family. The last one, Arthur, was born in 1874.

At St. Mary’s Church, Nottingham, in November 1880, Herbert Thomas married a second time, to widow Mary Issitt (nee Brown).
The groom declared himself a widower, while Mary’s first husband, warper William Issitt, had died in North Street in March 1879.
Mary had already had at least seven Issitt children, though daughters Ann and Hannah were the only two alive at the time of her second marriage.

Herbert Thomas and Mary had three children but they were all registered as illegitimate ‘Brentnall Issitts’ by Mary, suggesting that their ‘marriage’ was invalid.

Of the three children, Elizabeth Ann was the only one to survive beyond infancy.
At the age of 16 and after the death of her father she was baptised at Ilkeston St. Mary’s Church as a ‘Brentnall’.

In 1867 Herbert was described as ‘Bell Man, Bill Poster and General News Agent of Burr Lane’ (IP), taking over from his brother-in-law George Allen. And into the 1890’s he was still advertising himself as the ‘public bellman of 64 Burr Lane’.

Father James Brentnall was from a family of at least 12 children.
We have already met his sister Ann and her ‘humorist’ husband James Chadwick at the start of our walk.
We shall meet the oldest sibling Elijah in Market Street and older sister Elizabeth in the Market Place area with husband John Childs.

The other children left Ilkeston to spread over various parts of the country.

For example, brother Thomas Brentnall found his way to Middlesbrough and married Susannah Atkinson in 1843.

He established a grocery business there, in Suffield Street, where his younger brother Henry helped to attend the shop.
He was a town councillor and alderman, and in 1862 became the ninth mayor of Middlesbrough, and later became a JP for Middlesborough.
He died at his home in Southfield Terrace in January 1891 and was buried in the town — and for his services to the community a street was named after him. (No … it wasn’t called Thomas Street !!)

from the Daily Gazette,  Middlesbrough – 7 January 1891
DEATH OF A FORMER MAYOR OF MIDDLESBROUGH
One of the oldest occupants of the civic chair at Middlesbrough expired yesterday in Mr Thos. Brentnall, J.P., who died at his residence Southfield-terrace, after many years of retirement from the wear and tear of public life. Mr Brentnall, after many years’ good service on the Town Council, was elected Mayor of the town in 1862, and ten years ago his name was added to the list of Justices for the town. The deceased was a leading member of the Wesleyan connexion, and by politics a consistent Liberal. 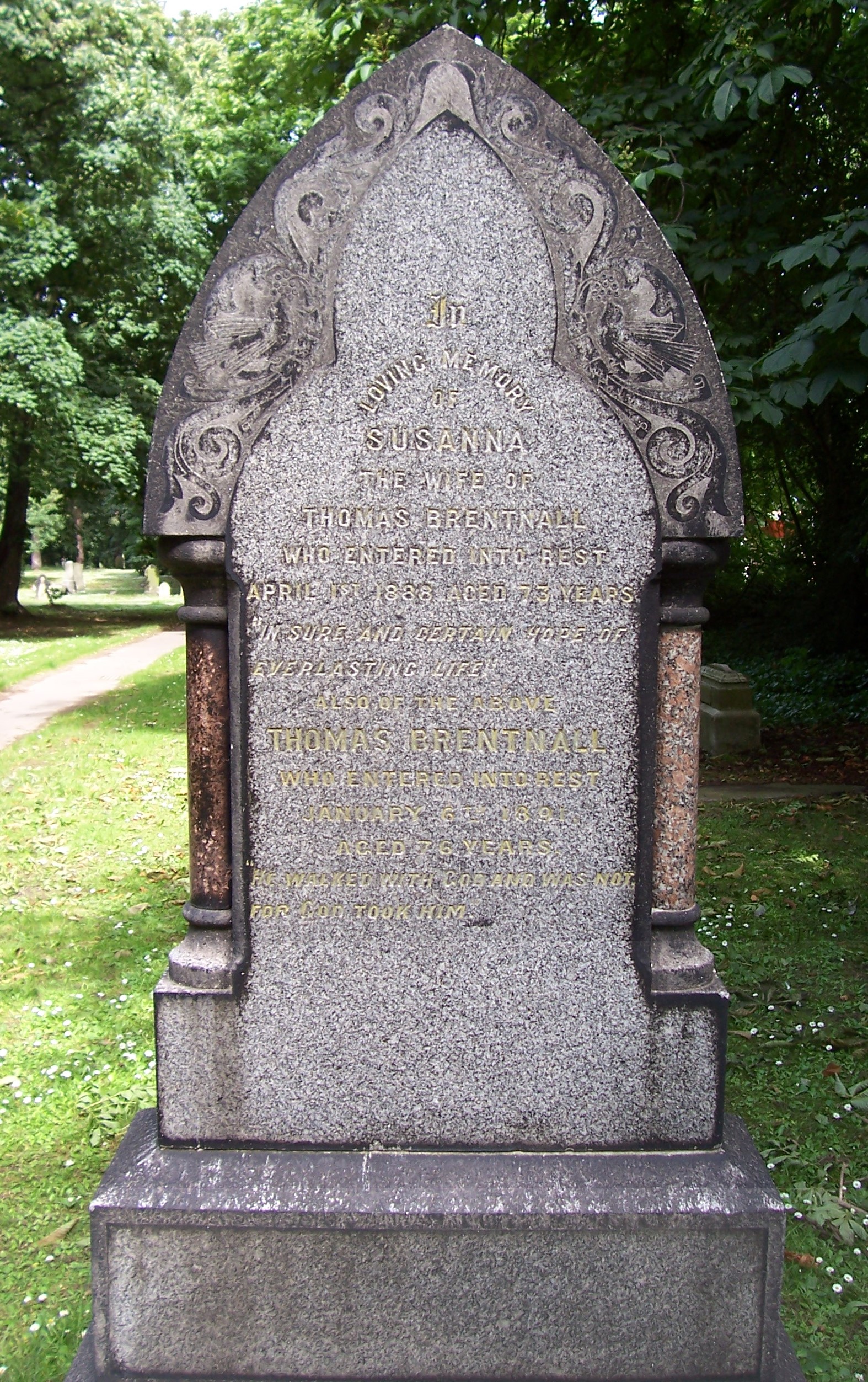 Thomas and Susanna are buried in Linthorpe Cemetery, Middlesborough

The younger brothers?…. bricklayer Henry spent some time in Surrey before joining brother Thomas in Middlesbrough in the early 1850‘s and traded as a grocer. He died there in 1896.

Joseph Edmund also moved to the North East, and also trading as a grocer….
And grocer, druggist, ironmonger Frederick Samuel also made his way to the same area, ….
while older brother and tax clerk John migrated eventually to Northampton via Lancashire, London and Scotland, accompanied by his Ilkeston-born wife Sarah (nee Gorse).
Third son, builder George, also went north but only as far as Riddings though some of his children were rather more adventurous and found their way to Australia.

The father of all these children was bricklayer/builder John Brentnall, eldest child of William and Sarah (nee Beardsley), while their mother was born Hannah Hickton, at Greasley in 1785, the daughter of labourer John and Ann (nee Meakin).

In memory of John Brentnall who departed this life February 2nd 1848 aged 68 years. Precious in the sight of the Lord is the death of his saints.

His wife Hannah died, aged 80, at Burr Lane on January 27th 1864, three days before her sister-in-law Mary (nee Brentnall) who lived in Pimlico with her husband, builder John Wheatley, and just three weeks after her daughter Hannah Cleminson. Both Hannahs were buried in Stanton Road Cemetery. .. and were, of course, two of the first burials there.
Mary Wheatley was buried in the extension graveyard of St. Mary’s Church in the same plot as her husband John, who died in August 1869.

And in the same lane were the Brown family.