Beyond the Mundy Arms …..

Adeline remembers this factory … “‘Bailey’s Factory,’ as it was called was situated on the Common (at Heanor Road)and was built in 1856 by Mr. Bailey and his son, in conjunction with Mr. John Taylor, a gentleman farmer who lived in the Manor House.
“It was expected that a good trade would be done, many people employed, and that Ilkeston would reap a rich harvest from the speculation. But these great expectations were not realised.
There was a slump in the lace trade. The factory was closed. Baileys left the town and Mr. Joseph (sic) Taylor, who was the chief financier, lost a great deal of money causing him financial difficulties“.

Born in Ilkeston in 1808 Joseph Bailey was a son of stocking weaver Samuel and Sarah (nee Burrows), and married Sarah Shaw on April 10th 1826.
He was a first cousin of Gilbert Bailey, farmer of Nottingham Road.

After marriage Joseph worked in this area as a lacemaker and in 1855 designed and later built his new Heanor Road factory — the second in a series of large factories to operate in the town and costing £4000 – with his eldest son, Ezekiel James.

White’s Directory of 1857 describes the factory as “a noble building 100 feet long, 34 feet wide, and four stories in height, with a steam engine of 12 horse power, and upwards of 40 machines, suitable offices, and every other convenience, arranged and fitted up in accordance with the most recent improvements. The number of hands employed is 350 to 400”.

And at the beginning of that very year , those same hands decided to strike, ceasing to work for Messrs Bailey until they had received an increase in their wages. And the union agreed to pay each worker 12s per week so long as they remained out of employ. Fortunately the Union met with the employers and by February 3rd it had been agreed to give the men the advance they had asked for.

On the south side of the factory, where Heanor Road meets Granby Street, an ornamental pond and gardens, surrounded by trees was added.
In addition to these works the family had an interest at High Pavement, Nottingham. But as Adeline records it was not long before the business was in trouble and passed out of the family’s hands.

In 1860 the local lace trade was suffering serious difficulties and in August of that year Messrs. Bailey, Son, & Co. suspended operations — having been in trading and financial difficulties for some time.
The Pioneer reported that this would have serious consequences for the town as Baileys “had been doing a very extensive business….and were paying a large amount for wages”.
The stoppage “will prove a great disaster to many families and to the town generally”.

In October of that year John Taylor dissolved his partnership with Joseph and Ezekiel James Bailey.
However in January of the following year the Nottinghamshire Guardian was still referring to the firm of “Messrs. Bailey, Son & Co.” who had kindly granted the use of their “new and spacious finishing room” to host the Erewash Valley rifle volunteer ball.

In August 1862 Ezekiel James left the partnership of  T. Shaw, E.J. Bailey, J.H. Haywood and W. Vernon and was then employed by Thomas Shaw and Co., lace manufacturers of Pilcher Gate, Nottingham who now took on Bailey’s Heanor Road factory..
(This is the same Thomas Shaw, builder of Ilkeston … and of Pigstye Park).

And in early 1867 the Pioneer reported that “the factory which has been so long in the hands of the assignees of Bailey and others, doing nothing, is likely to be very soon started again by a Nottingham firm. The other factories in the town are at present doing very little, trade having been slack for several months”.
Sure enough, a month later, in April 1867, the same newspaper was reporting that the factory had now been taken over by Messrs Hill and Swanwick, lace manufacturers of Lenton, Nottingham.
The original engine boilers were too small for the new owners and larger ones were planned.
Samuel Smith, aged 51, bricklayer of Sherwood Street, Nottingham, was hired to build the new foundations for these boilers, within excavated earthworks which were supported by wooden props…but not well enough.
During the building work the earthworks gave way and Samuel was crushed — his thigh and both legs were broken, several ribs were fractured and one eye was injured. (He was taken to Nottingham General Hospital).

At this time the factory was housing J. Hill and Co, lace manufacturers, then run by a partner in the business, William Hewitt.

William and his family lived at Granby House, 1 Granby Street … I believe it can be seen on this map.

When the factory was first built a circular pond and garden occupied the frontage right down to the junction between Heanor Road and Granby Street, with a belt of trees around its perimeter, so that the factory truly dominated its neighbourhood …. Mike Jobling (see below)

Can you spot these, south of the factory ? 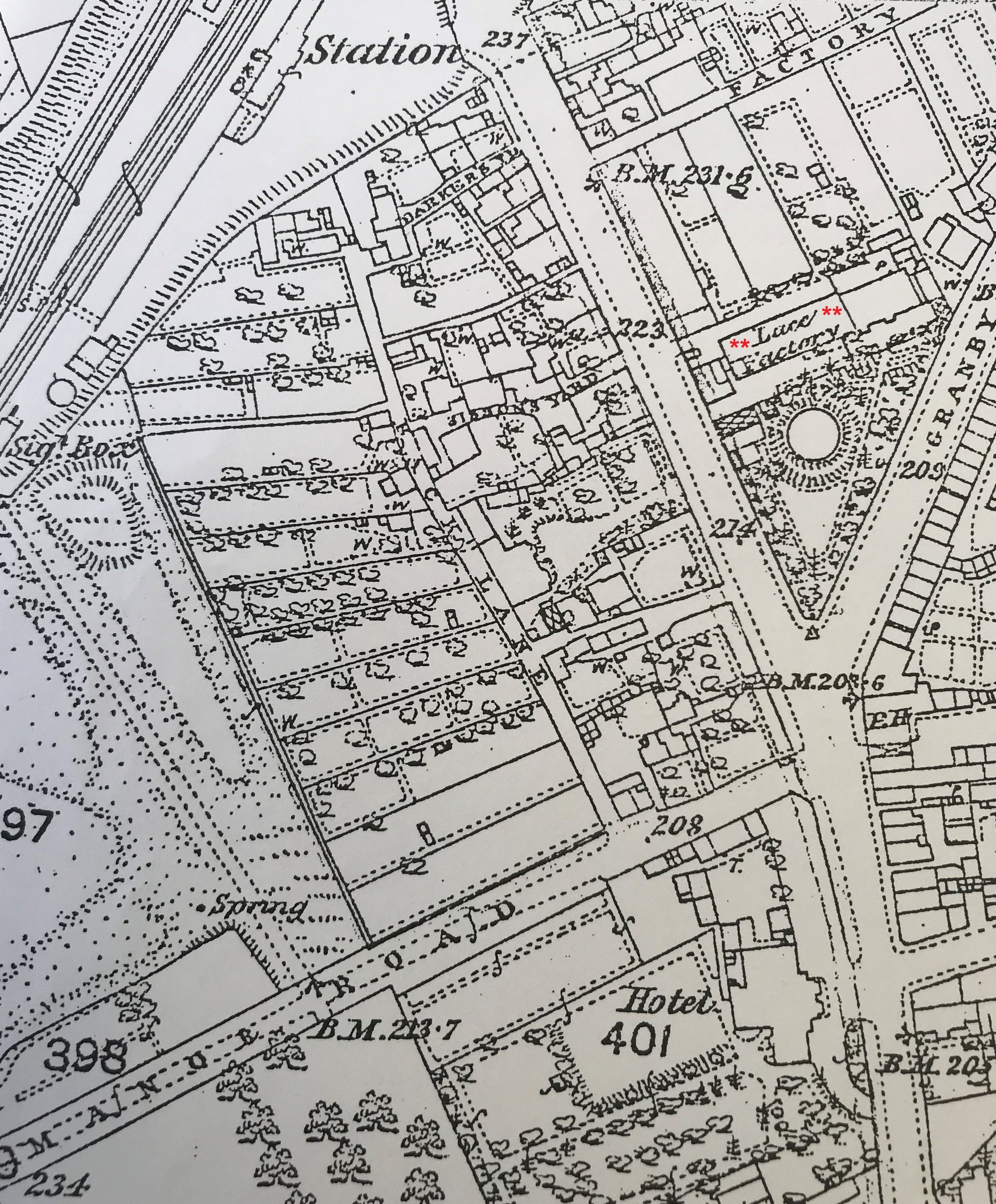 In an article for the IDLHS Newsletter (September 2004) the late Mike Jobling, Local Studies Librarian for Erewash, continued the story of Bailey’s Factory …

From the early 1890’s until around 1905the factory was occupied by Messrs Copestake, Linsay, CDrampton & Company, Lacemakers of Nottingham, but by 1906 the hosiery manufacturers J.B Lewis had taken up residence here as well as in their large factory at Ilkeston Junction’

In 1939 the Heanor Road factory was occupied by Dicona Ltd., contractors to the Government, who made such items as gas protection clothing, lifebelts, pouches and haversacks for the armed forces and other defence departrments throughout the Second World War. Afterwards a branch factory of the Tropicalisation & Packing Co. Ltd. of Worcestershire became established here, specialising in the preservation and packaging of goods for overseas use. Norton Plastics arrived in late 1946.

Several of the Baileys, including father Joseph, his wife Sarah, their sons Ezekiel James and Joseph junior, along with daughter Emma found their way to London. There, Joseph junior bought an area of land in Camberwell and in that area ‘Pilgrim’ found himself  house-hunting one day.
“I was quite taken aback by getting lost in streets with Derbyshire names and amongst villas, each pair bearing the name of a village in Derbyshire. On further inquiry, I found that Mr. Bailey had secured a large plot of land on which he had erected over one hundred pairs of villas, hence the names of streets and houses. It was intensely amusing to read such names as Heanor, Codnor, Smalley, Ilkeston, etc., and Derwent-street, Ashbourne Grove, etc. etc.” (1892)

Adeline points out the rather bleak nature of the road in the mid-ninteenth century … “There were no more buildings on the East side of Heanor Road, except Bradley’s Inn”. 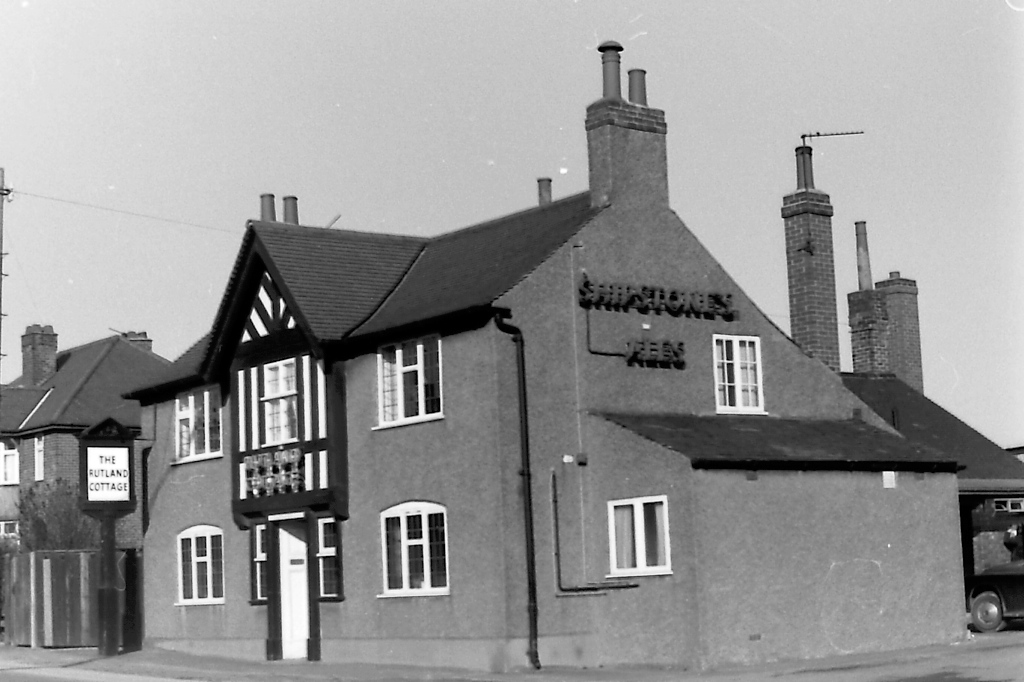 Bradley’s Inn was the Rutland Cottage beerhouse, in the hands of Henry Bradley, son of clockmaker Thomas and Mary (nee Smith).
And when he died in January 1841 his wife Judith Bradley (formerly Roe) was beer seller there.
And when she died in March 1858 her son Henry Bradley junior assumed control.
And when Henry junior died in November 1884 his youngest child William Bradley occupied the inn.
And when he died in February 1903 his wife Pamela Bradley (nee Tomlinson) was innkeeper.

No wonder Adeline knew it as Bradley’s Inn!

It was Henry junior who, in November 1878, was fined £1 with his licence endorsed at Heanor Petty Sessions for permitting gambling at bagatelle at the beerhouse.
The fact that he had a bagatelle board on his premises without the permission of the magistrates was an offence in itself. He was advised to get rid of the bagatelle as soon as possible. The offence had been uncovered by a plain-clothes police officer.

… and other pubs in the area ? 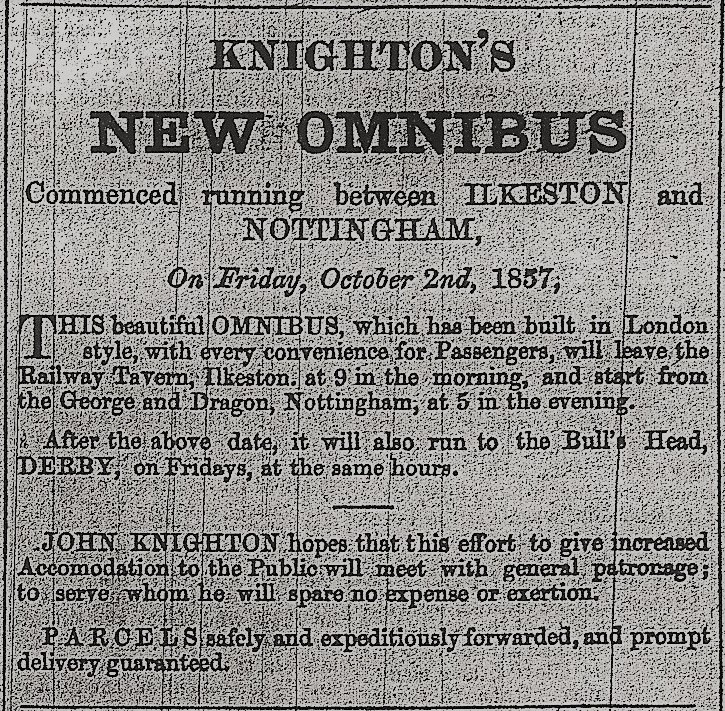 From the Ilkeston News October 10th 1857

John William Knighton had long been a beer retailer (as well as a coalminer) and is mentioned in many directories as such, from at least the mid-1830s.

His beerhouse was variously described as being on the Common, and on Middle Road (Granby Street).

When he died in 1863 his widow Hannah (nee White) continued the retailing of beer.

Was the ‘Railway Tavern’ mentioned here, John William’s shop in Granby Street ? Or was it a reference to the (Rutland Arms and) Railway Hotel of Thomas Hives ?

Since about 1862 Richard Beardsley, erstwhile collier of Trowell, had kept the Derby Arms in Cotmanhay Road. He reckoned it was about 200 yards from the Mundy Arms of Henry Clay, in Bath Street, and about 95 yards from the Granby Arms, also in Cotmanhay Road, kept by Phoebe Knighton, wife of Henry. She was the daughter of William and Phoebe Bell, formerly proprietors of the Travellers’ Rest in Nottingham Road. 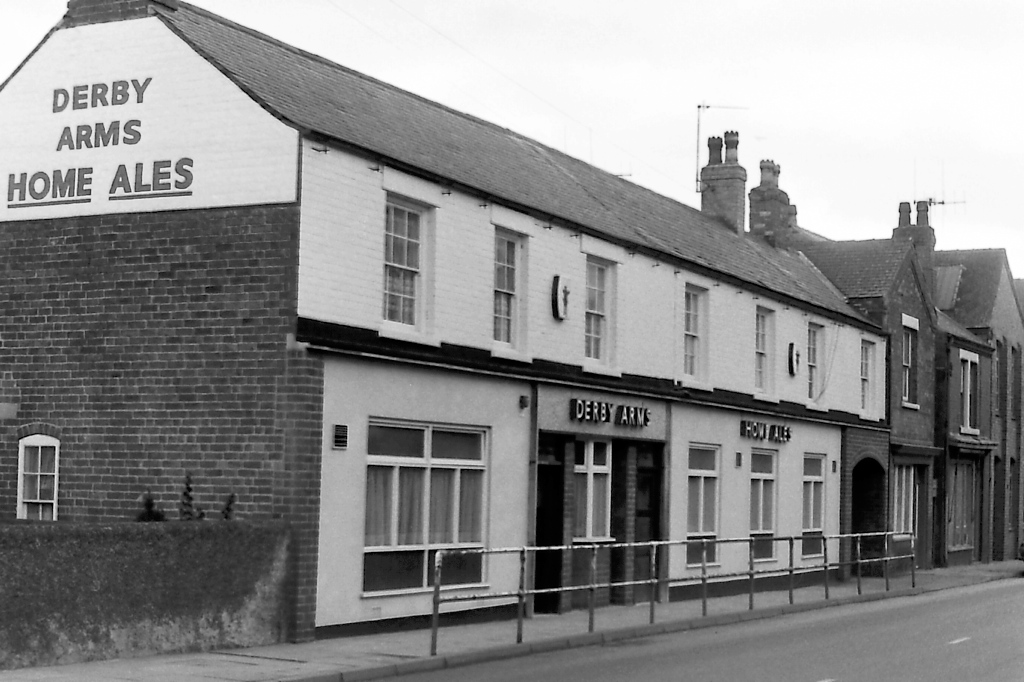 The Derby Arms in later life .. from the personal collection of Jim Beardsley

In 1885 the Derby Arms was kept by Herbert Sadler who, in that year, applied for a full licence. A similar application had beenrefused in the previous year because the premises had no stables, but since then, Herbert had enlarged the inn, and spent £200 in providing stabling. It was now suitable for a full licence; and the local population had also grown significantly in that year. The magistrates werevery harsh however and once more refused Herbert.

At the entrance gates at Shipley was the lodge.
This was built in two parts, the living rooms being one side of the gates, the bedrooms on the other side.
It must have been very uncomfortable having to turn out into the open on cold, wintry nights before being able to go to bed.
William Offen and his wife lived at the lodge. William was a smith at Carrier’s, his wife attended to the lodge gates.
There were no other buildings between the lodge and Workhouse Hill. 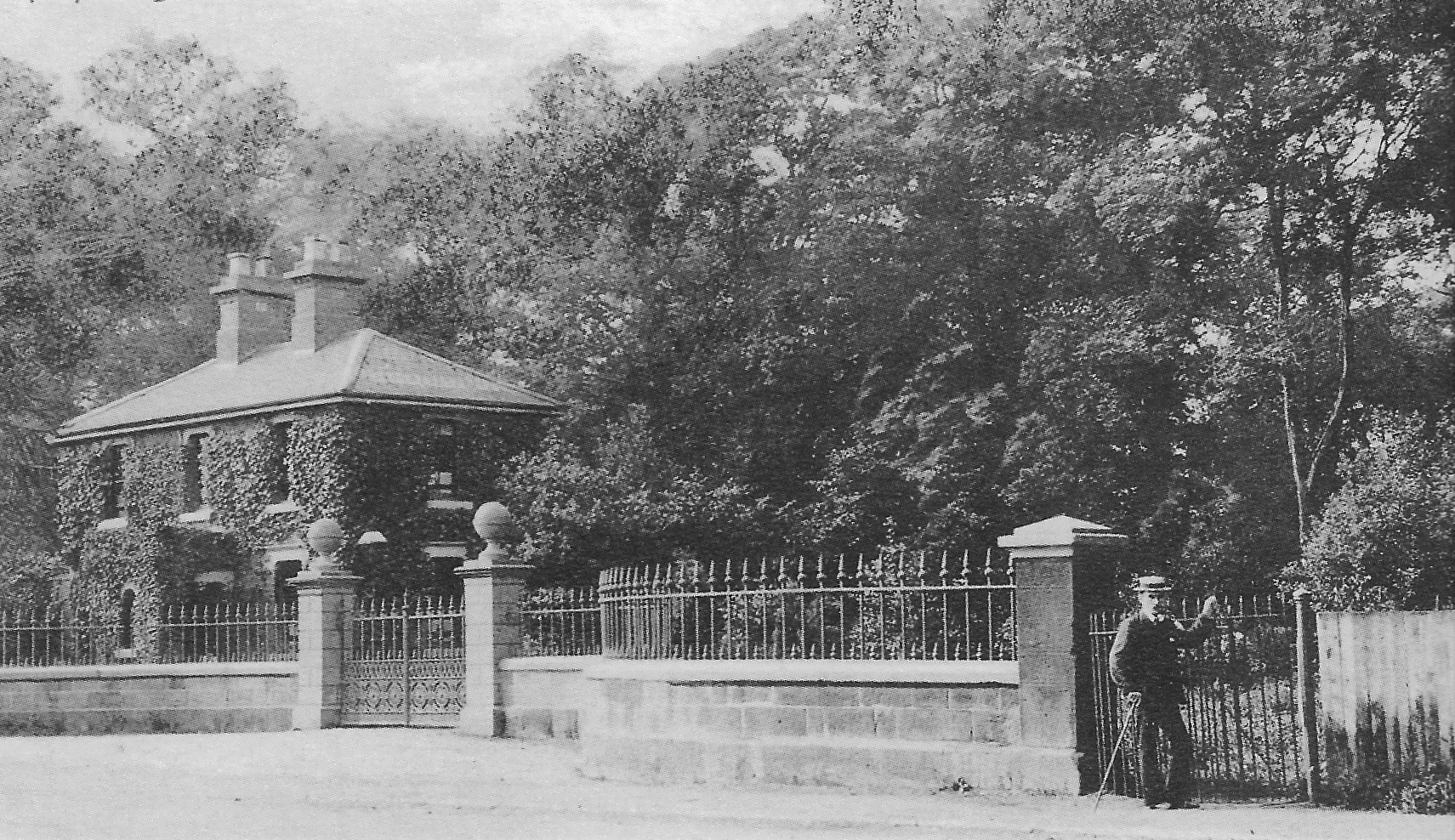 The residents of the Lodge were framesmith William Hofton and his wife Catherine (nee Clay), daughter of labourer John and Ruth (nee Levers) and younger sister of Henry Clay, landlord of the Mundy Arms.

Between 1861 and 1891 every census shows the couple at either Hassocks Lane or the Shipley/Cotmanhay Lodge.

I believe that William died in 1901, aged 82, at the home of his only son John and his family, at Durham Road in Yardley.

Walking back down Heanor Road towards the bottom of Bath Street, we come to that part known at one time as Workhouse Hill.