The Spring Cottage beerhouse and the Beardsleys

After the Bath Street Wesleyan Church, Adeline leads us on to ….. a high bank with a garden on it. (You can see this at the bottom of the map below with part of the north side of the high bank shown on Spring Lane.)
And further down this lane, past the Primitive Methodist Sunday School, on its right-hand side, was the Spring Cottage beerhouse. 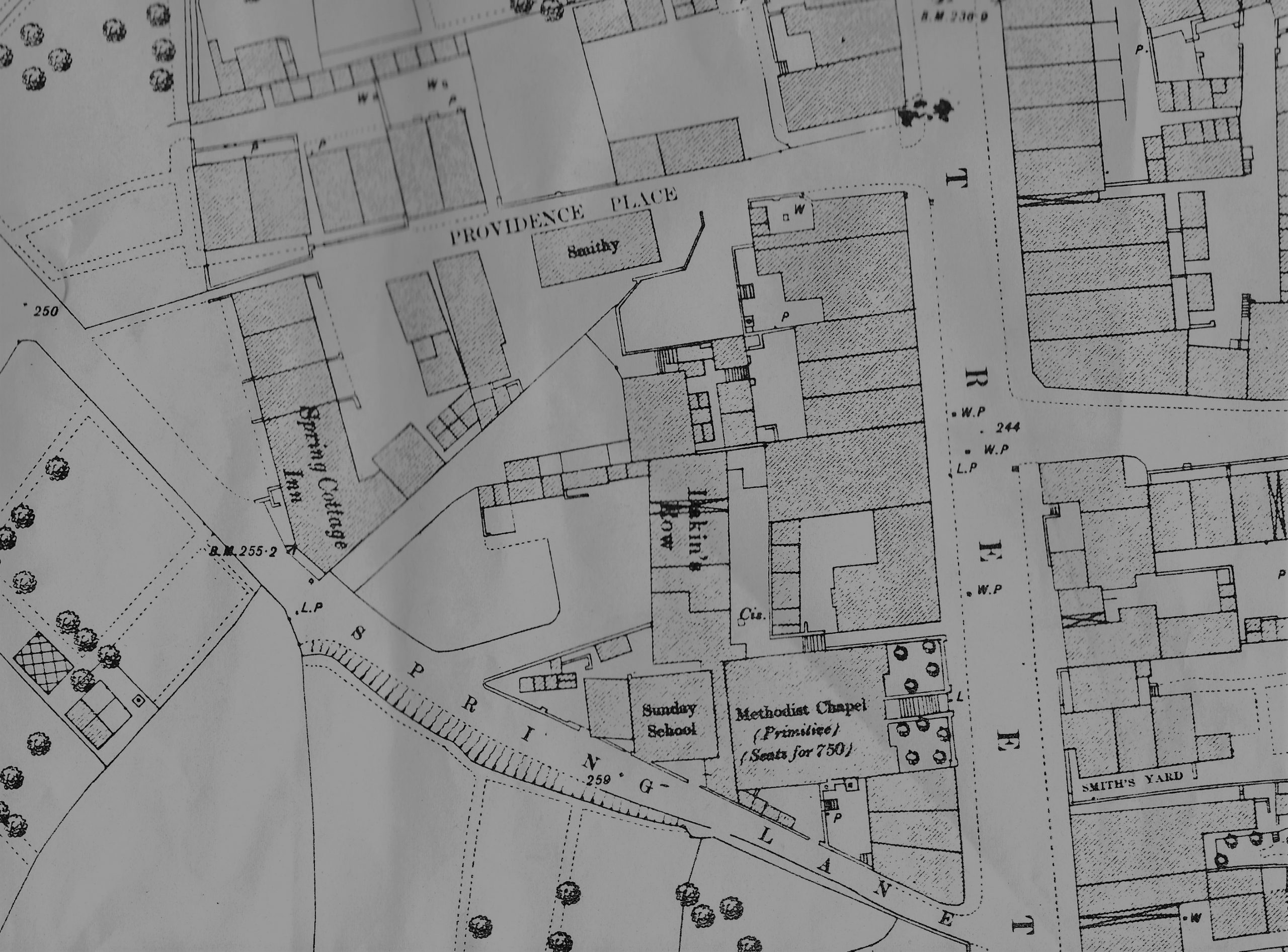 The beerhouse was owned by Mark Beardsley and about 1861 he had rented it to his oldest son Mark junior (1826-1899). However, by 1871, the landlord was George Wright (1824-1895) who was married to Sarah Ann Bell, the daughter of William and Phoebe Bell, the proprietors of the Travellers’ Rest Inn at the White Lion Square — see how it “runs in the family” !? When Sarah Ann died on November 30th 1871, her widower soon returned to concentrate on his main occupation of coalmining.

Mark Beardsley senior was baptised at St. Mary’s Church on May 31st 1805, the third of fours sons of coalminer Solomon and Mary (nee Gregory). Most of his life he earned a living as a stone-miner.
On August 28th 1826, Mark married Sarah Trueman (1808-1884), the eldest child of collier James and Sarah (nee Bostock). The Beardsleys had four children …

Mark junior, born on December 5th 1826 and, like the rest of his siblings, was baptised at the Primitive Methodist Chapel, then situated in Chapel Street. He was also a stone-miner, interspersed later with coal-mining and beerhouse-keeping.
On November 13th 1849 he married Catherine Phillips, second daughter of coalminer John and Mary (nee Hutchinson), and the couple had at least nine children.

James Beardsley was born on November 26th 1828 and married on Christmas Day 1848 to Ruth Sisson (1827-1890), daughter of coalminer Robert and Fanny (nee Trueman). Over the next 23 years, they had at least 15 children, not all of them surviving beyond infancy.

Maria Beardsley was born on May 22nd 1831. Her association with John Wombell, beginning before he was proprietor of the Ilkeston Pioneer, is described elsewhere.
Maria’s illegitimate son, George Wake Beardsley (1853-1901) was born on October 3rd 1853. On September 7th 1858, she married ironstone miner Lewis Russell (1837-1890), son of journeyman brickmaker James and Sarah (nee Hayes). They had three children.

Solomon Beardsley was born on November 7th 1833. His first wife, whom he married on October 16th 1855, was Hannah Bostock, the daughter of ironstone miner John and Hannah (nee Straw). They had nine children before Hannah died at 14 Mundy Street on July 22nd, 1871, aged 35.
On September 2nd, 1872 Solomon married his second wife, Mary Elizabeth Booth, whose family at that time was living close by, at 17 Mundy Street. She was the daughter of tailor Thomas Henry and Elizabeth (nee Crich). Solomon and Mary Elizabeth had at least six children together (although Mary Elizabeth had an illegitimate son, Alexander Booth, nearly five years before her marriage).

The Will of Mark Beardsley senior

On November 6th 1874, Mark drew up his last will in which all his children are mentioned. Below is the Probate of the Will, dated May 30th 1877, just over a month after Mark died, on April 29th. This is in the personal collection of Jim Beardsley who has kindly offered this copy to the site. 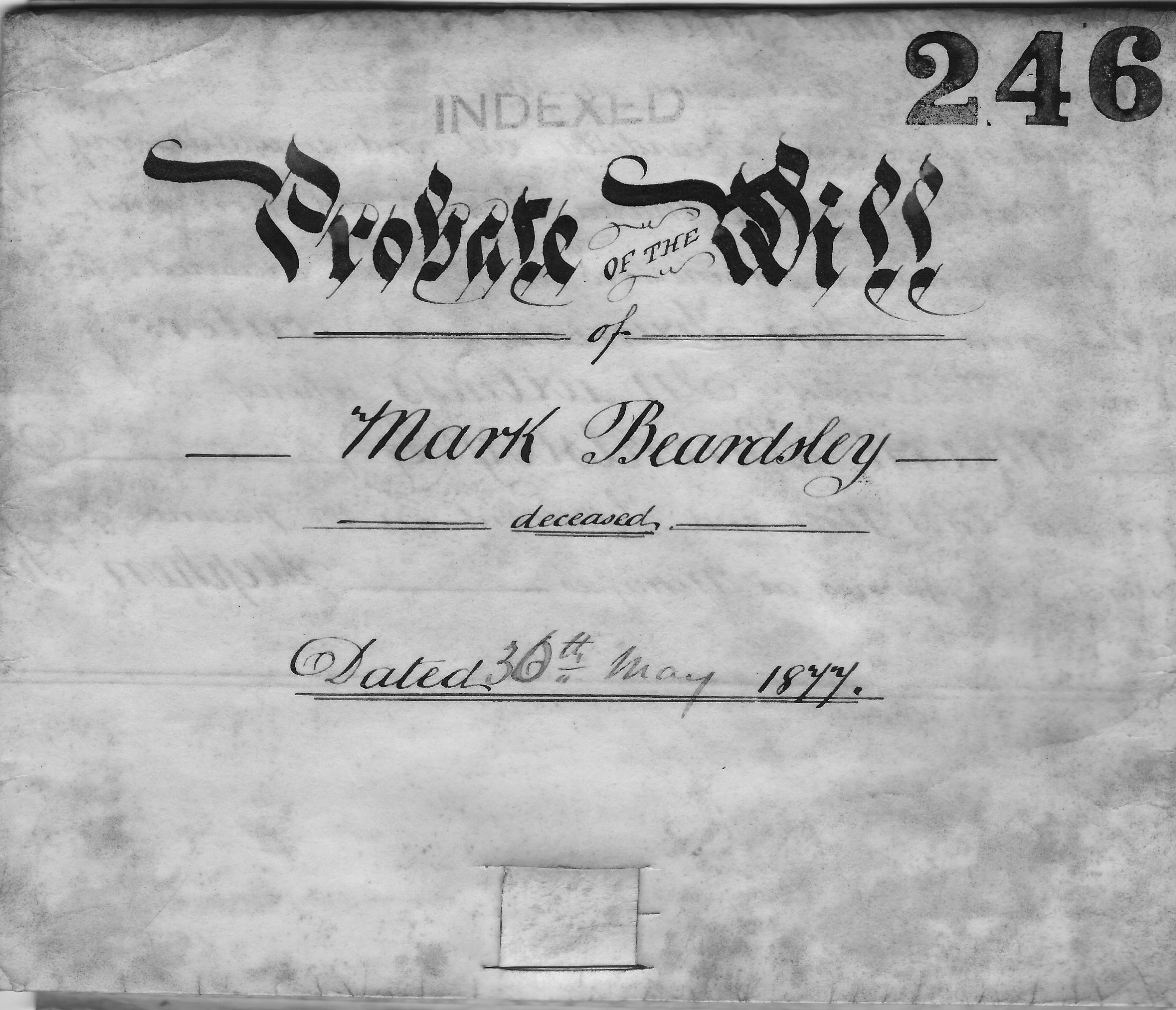 I think it is clear enough to be easily read but I will point out a few features.

Mark named two executors of the will … Samuel Richards and John Truman (sic). Samuel (1828-1901) was a grocer trading at 63 Cotmanhay Road, while John (1831-1909) was then the landlord at the Durham Ox Inn. Although both several years younger than Mark, they are described as ‘friends’ and perhaps illustrate how many residents of the town formed bonds and were drawn together by trade associations as well as politics, religion, proximity and family relationships.

As in many wills at that time, all Mark’s personal estate and effects were left to his wife Sarah to ‘enjoy’ during the rest of her life. She was also to benefit from the rents and profits of her husband’s property real estate.

And after Sarah’s death, the Public House, which Mark named as the Springfield Cottage, with all its outhouses etc. was left to his eldest son Mark junior. At that time it was tenanted by Griffin Wagstaff who had been granted the license in May 1872, previously held by George Wright (above).
Born in Swanwick, Derbyshire in 1834, Griffen was a married engine-smith who seems to have spent only a few years living in Ilkeston in the early 1870’s. (In 1872 Griffin had just left the Glass House Inn in Codnor, the latter inn then being taken over by William Ratcliffe, who had just left the Poplar Inn in Bath Street, which was then taken over by Patrick Derbyshire !! Another example of ‘musical chairs’ played by Victorian beerhouse landlords of the Erewash District, and probably elsehwere.)

Specifically excluded from this arrangement was what the will described as Cottage No. 3 which adjoined the inn. You see it on the map above — I suspect it is the one adjoining the beerhouse on its upper side — with two further cottages adjacent. This cottage was left to second son James.

The two other adjacent cottages — Nos 4 and 5 — were left to daughter Maria.

The house — presumably attached to the other side of the beerhouse — was willed to grandson George Wake Beardsley, illegitimate son of Maria (and John Wombell). He was still living with the Beardsley grandparents, though a couple of months after this document was drawn up, he married Mary Columbine — on Christmas Day.  (The bride was a cousin of Elizabeth Adeline Wells nee Columbine). At that time the house was rented by Henry and Matilda Straw.

Mark also owned two properties in North Street which, at that time, were numbered 32 and 33, then occupied by the families of Frederick Knighton and Jacob Longdon. These were left to the youngest child Solomon who, by 1881, had moved into both properties and established a trade as grocer/beerseller. He died there on February 15th 1897, aged 63 — by that time the houses had been renumbered, and combined into No. 65.

At the time his will was drawn up, Mark senior and his wife Sarah were living at No. 2 Granby Street, with daughter Maria Russell and her family, next door at 2A — both standing on the north side of that street. Owned by Mark, both were bequeathed to son James.
On Mark’s western side was neighbour and lace manufacturer William Hewitt, at Granby House, while on his east flank was butcher William Mellor and family.

As usual, Mark set out his wishes should any of his children die, and what should happen to his estate after the death of his widow Sarah. 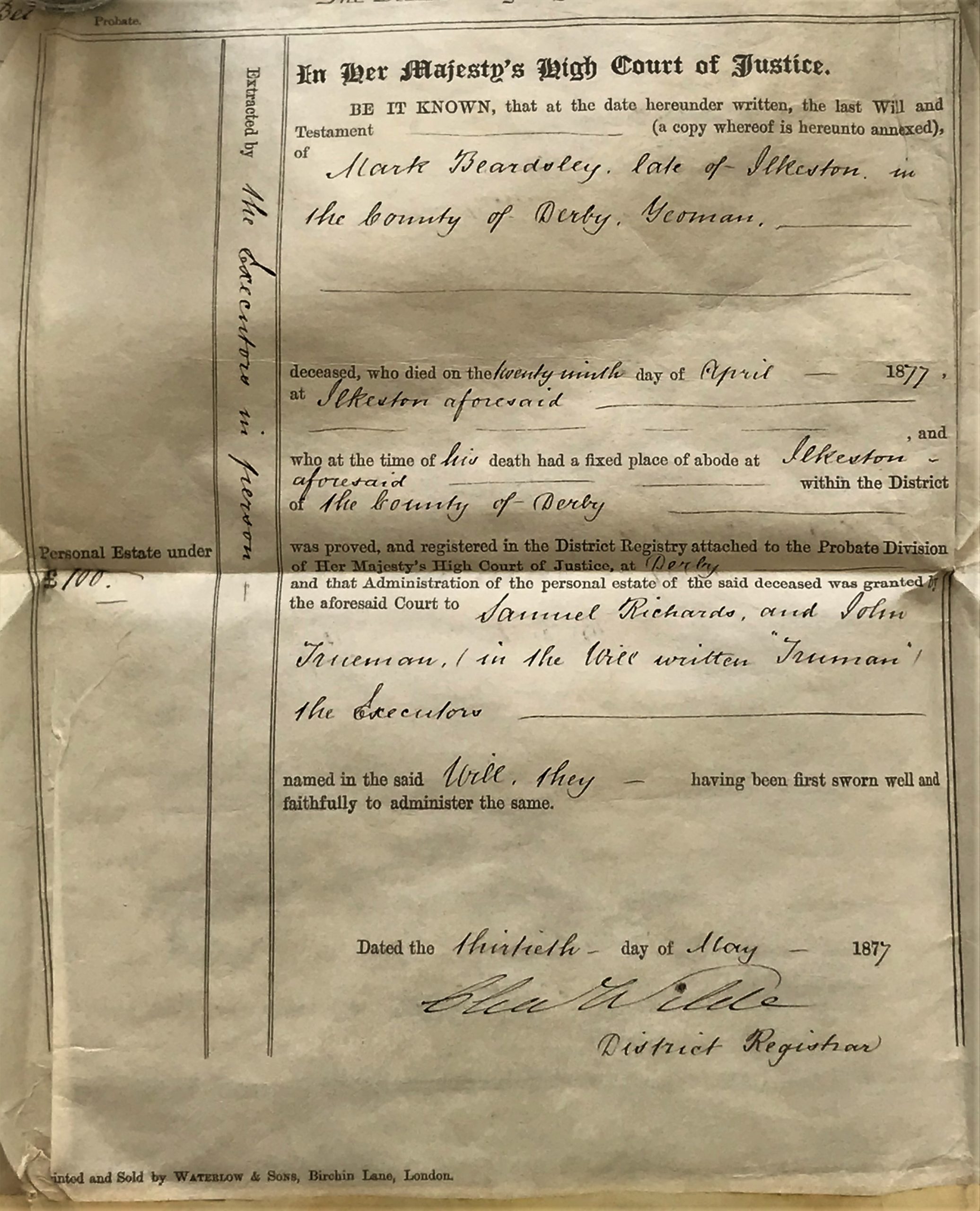 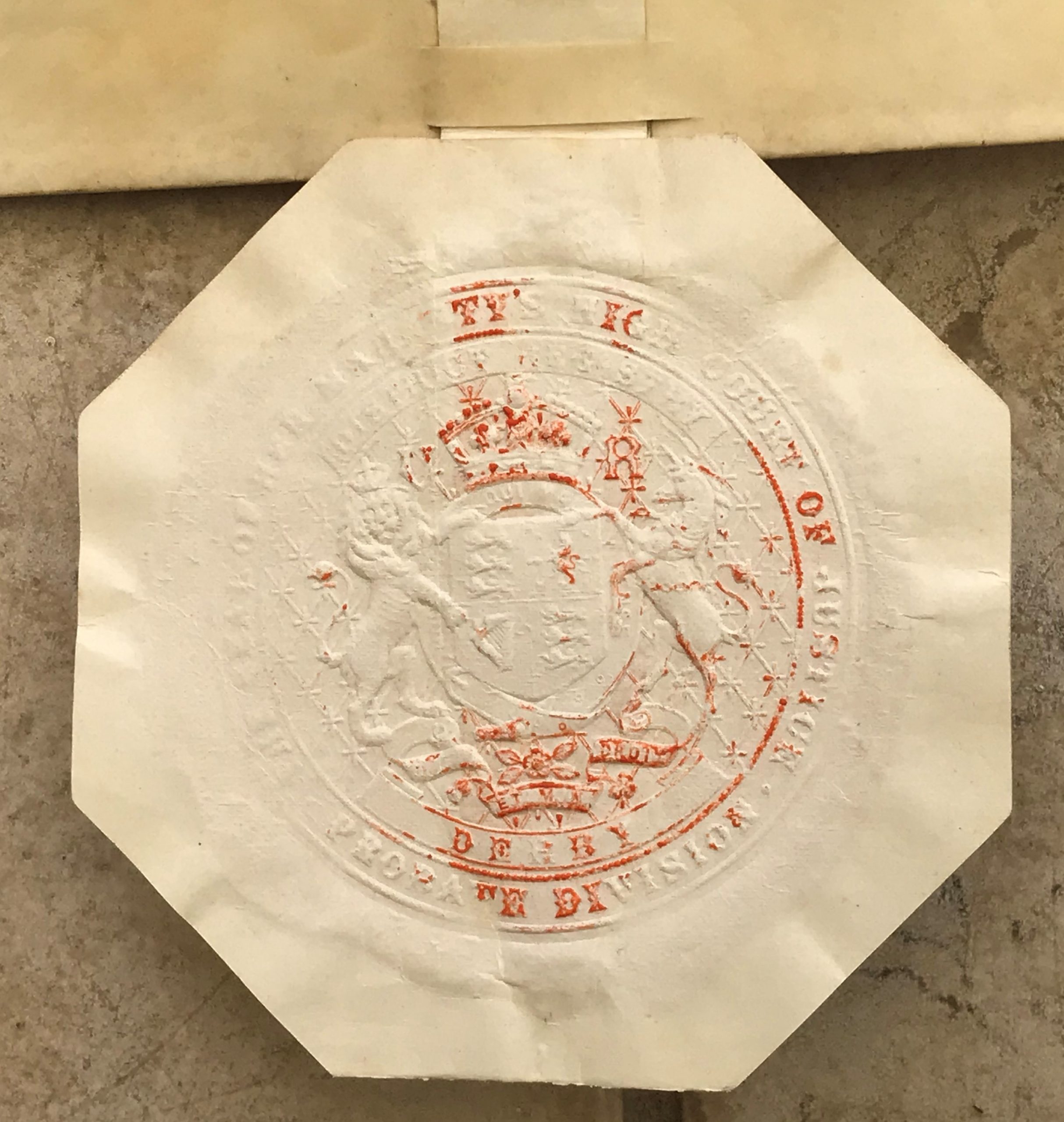 In 1883 it was in the hands of John Gregory and by 1885 John Moore was in charge.
In September of 1885 it was once more transferred, back into the care of Mark Beardsley junior.

When Mark junior died at the Inn on December 23rd 1899 the premises passed to his eldest son Mark the Third, who also died there, on July 7th 1914. 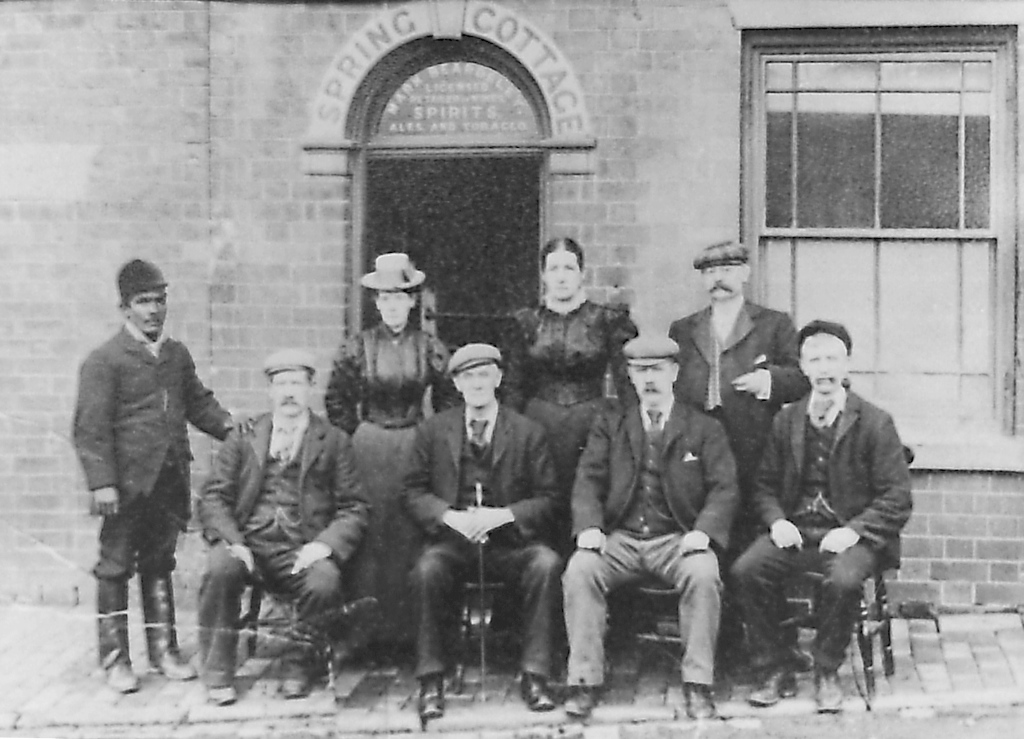 My great great granddad was Mark Beardsley who was the licencee of the Spring Cottage. It seems everybody from Ilkeston was related to a Beardsley!  I have picked up this newspaper cutting from the Derby Mercury of 30 May 1894 where it refers to Ruth Beardsley, Mark’s stepdaughter. I cannot find who or how Ruth is related to Mark.

I can’t work it out either !! Mark junior doesn’t appear to have a step-sister, sister, half-sister, sister-in-law, or any other type of sister with the name of Ruth Beardsley in 1894. Have you any idea ?

And now for the rest of the west side of Bath Street.