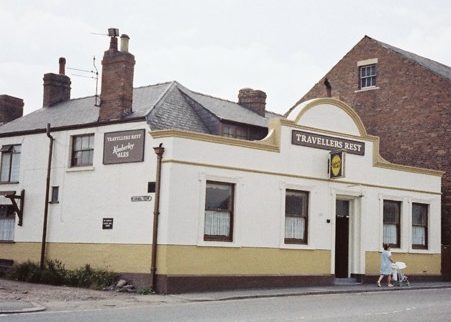 “In White Lion Square was the Travellers’ Rest, landlady Mrs. Bell.
William was landlord after his mother’s death.”

Phoebe Riley was the daughter of Brinsley shoemaker John and Mira (nee Moss) and from April 1825 the wife of William Bell, blacksmith, framesmith and victualler, living near the confluence of Nottingham Road and Stanton Road — formerly Boot Lane — in an area previously known as Outram’s Buildings.
Both originally from Nottinghamshire, Phoebe and William came to Ilkeston after their marriage and raised a family of many daughters and two surviving sons, the elder of whom, William, took over the control of the Inn when Phoebe died in December 1879, aged 71. Her husband had died in August 1854.

Sarah Ann married miner George Wright in October 1850 and died in November 1871, aged 40, at the Spring Cottage Inn in Spring Lane, where her husband was the landlord.
George subsequently lived with his only legitimate daughter Selina and her husband – since February 1872 – Jonathan Slack Pursglove, cabinet maker, upholsterer and paperhanger of Market Street. He died in that street in March 1895, aged 74.
Before his marriage George had fathered two illegitimate daughters with Mary Morley, daughter of Cotmanhay schoolmaster John and Mary (nee Henshaw).
One daughter, Elizabeth Morley, married miner Moses Bullivant Henshaw in February 1865, and died at 306 East Main Street, Amsterdam, New York State, in February 1917, aged 72.
The other daughter, Marina, died in infancy.

Selina married warper Hillary Spencer in March 1851.
Hillary committed suicide at their Regent Street home in May 1887, drinking a quantity of laudanum earlier purchased from the chemist shop of Charles Potts. He was drunk at the time and had been drinking heavily several days prior to his death.
Ten years later, now at 13 Stanton Road, Selina died. On a late summer evening she was taking in her washing line when she caught her knee on a chair, the blow causing a large ulcer to open and bleed profusely. She died within an hour.

Harriett died in infancy in September 1835.

Priscilla married Codnor-born blacksmith Isaac Parkin in April 1852.
In 1871 and for many years thereafter they were publicans at the Erewash Hotel beerhouse in New Street — later Station Road.
Like many beerhouse keepers in Ilkeston Isaac applied for a full licence to allow him to sell spirits, in 1875.
He was refused.
He tried again in 1882 .. with the same result … despite his argument that the dwellings and population in the area had grown sufficiently to warrant a broader choice of beverages to be offered.

Phoebe married Cotmanhay lacemaker, later contractor, later publican, Henry Knighton in April 1856.
Aged 37, she died – from cirrhosis of the liver!! — in July 1875 when her husband was then landlord of the Granby Arms on Cotmanhay Road.

Harriett the Second married Common coalminer James Beardsley in March 1861 and for much of the rest of her life lived in Lower Granby Street where she died — at number 42 — in September 1910, aged 70.
After her death her illegitimate son John Bell alias Beardsley continued to live at the Lower Granby Street home.

Caroline married framework knitter George Eaton in June 1862 and then lived in Extension Street.
She died in February 1876, aged 34, suffering from chronic bronchitis and asthma.

William junior married Dale Abbey-born Elizabeth Jacques, daughter of labourer Joseph and Mary Ann (nee Smith) in March 1872.
Both before and after his marriage he kept the Travellers’ Rest beerhouse until he retired into Havelock Street — accompanied by his elder daughter Phoebe — and where he died — at number nine — in 1914.
His other surviving daughter, Mary Ann, married in February 1892 to coalminer George Straw, a son of Norman Straw of Bright Terrace, off Market Street…. a marriage destined to last only a few years, but time enough for three children.
In the later 1890’s Mary Ann began a relationship with coalminer Robert Henshaw. (see The mystery Henshaws of Chapel Street)

Myra married Heanor Road coalminer Wheatley Straw in April 1864 and a few months later went to live in Park Road, in a house rented from James Goddard, builder and joiner of East Street. There their first child, Samuel, was born on August 5th 1865.
The house rent was 2s 4d per week, payable fortnightly. Unfortunately by June 1866 Wheatley had managed to accumulate rent arrears of nearly £2, and his landlord had lost patience. He wanted payment !!
The last straw — no pun intended — was when he had discovered that Wheatley was keeping pigeons in a bedroom. The coalminer and his family were given a fortnight’s notice to leave. However Wheatley left a little sooner than that, taking all his household goods with him, and without paying off the arrears; it was only after being taken to court, being threatened with a fine and possible imprisonment, with hard labour, that Wheatley consented to a ‘payment plan’ to pay off his debt.
The family then moved into Oxford Street before travelling north to Cotmanhay !!
There Myra died, at 3 Richards’ Yard in 1898, aged 51.

There were several ‘Wheatley Straws’ born in Ilkeston and the given name probably dates back through the Straw family line to the marriage of John Straw and Ann Wheatley in April 1734 at St. Mary’s Church.

Emma remained unmarried, living with her parents and then with her sister Harriet. She died in Station Road in October 1890, aged 41.

Youngest child George trained as a pattern maker and after his second marriage, to Fanny Wilson at Eastwood in 1878, he also kept the Anchor Inn beerhouse there.

Initially the Travellers’ Rest was a beerhouse and its name was ‘singularly inappropriate’ in the view of RBH, recalling the area as it was in the mid-1870’s.
Outside the inn every Saturday evening the Irishmen of this area — and there were many!! — would provide “a series of the most bloodthirsty combats it was possible to imagine”, at times necessitating the participation of William Bell junior.
“I well recollect, as a boy of 7 or 8 years, seeing Mr. Bell himself, who possessed a very straight left, knock down half-a-dozen of the drunken Hibernians, one after the other with admirable coolness and scientific precision”.

I have never seen a situation so dismal that a policeman couldn’t make it worse ….. Brendan Behan
It was ‘the law’ — in the form of police constable William Neath — with which William junior came into conflict in September 1874 when he was accused of keeping a disorderly house and allowing too many drunken people in it.  Can you believe it??!

The P.C. had been alerted by loud noises coming from the Travellers’ Rest and had gone inside to investigate. There he discovered the source of the racket —  several drunken customers. One however was asleep with his head on the table and the P.C. ordered landlady Elizabeth Bell not to serve any more drink to the latter (!!). She refused.
Enter her husband William junior who immediately ordered ‘the law’ off the premises.
“Get out or I will chuck you out” shouted the innkeeper and true to his work he manhandled the P.C. out of the door. This was just as the latter was threatening charges of permitting drunk and disorderly conduct on the premises, of assault, and whatever else he could think of.
At the subsequent Petty Sessions hearing, several witnesses spoke in William’s defence, but as most of them were members of the ‘drunken party’ their testimony was treated as suspect.
William was convicted and fined 10s and costs, though his licence was not endorsed.
Perhaps William had been feeling vexed with the forces of authority when he encountered P.C. Neath. Earlier in the month his application for a wine and spirits licence had been refused by the magistrates at Heanor Brewster Sessions.

However in September 1875 William’s beerhouse licence was renewed — despite the fact that he had been convicted for permitting drunkenness on his premises and for assault – because his licence had not been endorsed.

Perhaps the magistrates might not have been so forgiving had they known what was to come in the next month.

In November 1875 Mr. Neath had now left behind the police force — as well as his common sense — when he tried to get a drink at the Travellers’ Rest one afternoon. He was ordered out by William’s wife, Elizabeth.
Enter – once again– husband William who threatened once more to kick him out.
Perhaps the memory of his fine then took a hold of  William, causing the landlord to take a hold… of Mr. Neath’s throat. His strangulation of the ex-PC was interrupted by onlookers who had to prise his hands away.
This led to another fine for William. The latter’s counter charge that Mr. Neath was drunk and refused to leave the inn was considered but dismissed in court.
William had to pay for the costs of that case also.

There is no record that William Neath ever entered the Travellers’ Rest again.

In the late 1870’s William junior was engaged in building alterations at the Inn and the Local Board permitted him to bring forward the frontage of the public house — but charged him for it of course!  By 1881 William had discovered that he owned the land he had built on and so the Board had no right to charge him. Thus he applied for – and secured — a £4 rebate!

For several years after Mr. Neath had been ejected from the Travellers’ Rest, William Bell managed the Inn impeccably. But in April 1882, he found himself in trouble once more, when he was charged with supplying drink to a couple of labourers who were clearly drunk when they entered his Inn. William tried to talk himself out of a fine at the Petty Sessions, but to no avail … and another black mark next to his name.
For one of the labourers — Irishman Michael Waldron of Trueman’s Court — this was his fifteenth appearance at court, and he was fined accordingly.

‘Outram’s Building’ appears on the 1841 census, sandwiched between Boot Lane (Stanton Road) and Evans Row.
The Outram connection to Ilkeston may come via John Outram, the son of Joseph and Ann (nee Micklethwaite), married in 1776.

Joseph was of a distinguished Alfreton family and had been married twice before, having several other children by his second wife, Elizabeth Hodgkinson.
His son John had owned some land on the east side of what is now Lower Stanton Road, which he sold to Matthew Hobson senior in 1817.