Having walked up Heanor Road, we are now walking down it.

Adeline points out that “on Heanor Road were the old workhouse cottages. Wheatley Straw, a very prominent member of South Street Chapel, lived in one of them. He was a miner.”

On April 14th 1734 John Straw married Ann Wheatley, the result of which was the first of Ilkeston’s ‘Wheatley Straws’.
But not its last!
The first one was baptised at St. Mary’s Church in January 1751.
‘Wheatley Straw the first’ had an older brother William who married Hannah Meakin in February 1773 and one of their sons, baptised in January 1782, was ‘Wheatley Straw the second’.
In November 1803 he married Eleanor Hofton and on the 1841 census they were living at Workhouse Hill – later Heanor Road.
In the following year, then aged 59, he gave evidence to the Royal Commission on the employment of children in the mines.
(He) has worked in the pits since he was 9 years old and now works in Messrs. Potter’s Workhouse Pit where he is a butty.
When he first worked in a pit he opened and shut the wind-door to ventilate the pit. He worked from seven to eight and had 10d. per day. (just under 4p in new money)
When he was about 10 years old he drew the empty corves back to the men when taken from the asses. He then had 1s. per day. (5p)
When he was 11 years old he became ass-lad and received 1s. 6d. per day. (7½p)
He then shoved the waggons and had 2s. per day.(10p)
After that he assisted in soughing and hammering and got 3s. per day.
He then became a loader at 3s. 6d a-day.
The last 30 years he has been a butty. He takes the coals at so much per ton and relets the job to the loaders and men at per ton.
The children and young men by the day, the ‘tween’ lads that is, the boys who drive between the last and first two asses and has 1s. per day. Those who drive and guide the belt 1s. 6d.
They go down at six in the morning and come up at eight in the evening and one hour is allowed for dinner. They never work more than fourteen hours. The children are seldom employed at night-work. The men who work by night move the wood and occasionally hole.
He has never known a collier go blind on Messrs. Potter’s field as in some fields as they do.
He considers, unless in appearance, colliers are healthy and if they are not fool-hardy in their youth, live as long as their neighbours.
They have no chance of education excepting at Sunday-schools and few even attend them. He blames the parents more than the children for not making them.
He is sure, as a body, the colliers are much more rational and improved as members of society to what they were 20 years since.
He considers at these pits it would be a great loss to the parents if children under 13 years of age were not allowed to work.
(© The Coal Mining Resource Centre, Picks Publishing and Ian Winstanley).

The ‘Wheatley Straw’ referred to by Adeline is probably the son of Workhouse Hill collier William and Betty (nee Bramley) and the nephew of Wheatley Straw the second.
Born about 1817 he married in February 1845 to Mary Rigley, daughter of coalminer Samuel and Hannah (nee Chambers).

“Gilbert Bailey built his house lower down, it stands back some distance from the road.”

On our walk in Nottingham Road we met the only Gilbert Bailey living in Ilkeston.
He was a farmer, the Stapleford-born son of lacemaker Gilbert senior and Jane (nee Thompson), and married to Mary Ann Allen, daughter of lacemaker and the sexton of St. Nicholas’ Church in Nottingham, John Allen and Elizabeth (nee Tong) — in November 1840.

In her article of February 1933 — the birth of a street — Adeline refers to Gilbert Bailey building the Heanor Road factory with John Taylor.
Perhaps she is confusing Gilbert with Joseph?
Joseph Bailey is recorded on the 1841 census living on Workhouse Hill and lived in this area until he left the town.
He did have an older brother called Gilbert, born about 1801, but he lived in Nottingham.

One such cottage was occupied by Thomas and Hannah Bramley, both of whom reached a ‘ripe old age’, Hannah dying in November 1873, aged 90, and Thomas in December 1882, aged 103.
The latter was originally a coalminer, then a coal dealer and in later life, a higgler selling salt and sand from his cart as he went around Cotmanhay.
He seems to have spent most of his life living in this area and ended his days at Heanor Road.
William Gauntey’s map of 1797 map shows Thomas Bramley as a stockinger, living on the western side of Workhouse Hill with about 20 other households — his dwelling is opposite to Tatham’s Lane which runs off the eastern side of the hill in a west-east direction.

The Workhouse — after which the hill gets its name — stands in a plot of land adjacent and to the east of Thomas’s plot, where the Great Northern Station would later be built in the late 1870‘s.

At one time the Bramley couple shared their cottage with a faithful donkey, which slept in the downstairs room while they occupied the one above, reached by step-ladder.
In 1880 Edwin Trueman wrote …..
“In a little cottage at Cotmanhay, by the side of the highway leading to Heanor, lives Thomas Bramley, the only centenarian Ilkeston is known to have produced.
“In December last the old man celebrated his 101st (sic) birthday, and is still in full possession of his mental faculties, though rather deaf, and a sufferer from lameness, the latter affliction having extended over a great number of years.
“He has a good memory and can tell what Ilkeston Common was like before its inclosure (in 1794), and how cottagers were allowed to pasture their cattle on waste land ….
“His wife, who was several years his junior, died in November (26th) 1873, having attained the unusual age of 90 years.
“Bramley, during the greater part of his life, obtained a livelihood by selling sand for household purposes”.

His longevity had endowed Thomas with great meteorological knowledge.
He knew that the winter of 1880/1881 was one of the coldest, most severe experienced, and that the May of 1881 one of the driest and hottest within the memory of man.
(Tatler of the Pioneer recorded 75°F in his garden shade one May Saturday).

Thomas and Hannah Bramley were buried close to each other at Christ Church, Cotmanhay.
The precise age of Thomas is not clear.
His birth is reported in the Advertiser of 1882 as December 24th 1777. His death is registered as December 12th 1882 at the age of 103, when he was reputed to be the oldest man in Derbyshire.
At the time of his death Thomas was living with his grandson Joseph, whose wife was Hannah (nee Watson), and surrounded by several great grandchildren, some over 100 years younger than Thomas.

I believe that Thomas was the son of Richard and Mary (nee Turner) and was baptised at South Wingfield Parish Church of All Saints along with his siblings.
Was he therefore ‘produced’ by Ilkeston?

At the time of Thomas’s death his son Richard, aged about 75, was still living on Derby Road, himself a coal higgler.

In 1846 Bagshaw recorded in his Directory that the Old Workhouse was “occupied by 14 widows belonging the parish, which is now in the Basford Poor-law Union”.

An examination of the 1841 census for that area shows the following widows on Workhouse Hill.

Frances Lowe (nee Trueman), aged 30, widow since 1836 of Heanor-born joiner Christopher, with three children.
In the following year and with the co-operation of whitesmith Samuel Sims, she added an illegitimate daughter, Harriet Maria Lowe, to the family.
Then in 1853 she married dealer in salt and widower Samuel Newton and went to live in his home town of Heanor.

Mary Duro (nee Beardsley), widow of labourer Richard, aged 56, with her two daughters, one son-in-law and two grandchildren.
She continued to live in this area and died in July 1862, aged 82.

Hannah Bramley (nee Webster), aged 55, widow of James who had died in May 1821 and the sister-in-law of Betty Bramley who had married William Straw (See above).

Elizabeth Holmes (nee Hall), aged 60, with her unmarried daughter and the latter’s illegitimate daughter. Elizabeth was the widow of Ilkeston-born labourer Thomas, an army pensioner who had been invalided out of the 69th Regiment in 1826, after a ‘good and meritorious’ career, having been ‘debilitated from long residence in India’.
Elizabeth died in November 1846 when her recorded age was ‘about 75’.

Amy Fulward (nee Beardsley), aged 65, widow of collier John, with one child…. but several more children and grandchildren living around her.

Sarah Edwards (nee Beardsley), aged 60, widow of collier Thomas who had died in February 1838. In December of 1842 she married widower and coalminer William Straw of Workhouse Hill, who had previously been married to Betty (nee Bramley). Betty had died in November of that year.
On the 1841 census Sarah has her older sister Hannah Dane (nee Beardsley) living with her. She had married William Dane in October 1788 and had been a widow since October 1821.
Both Hannah and Sarah were daughters of stockingweaver Francis Beardsley and Elizabeth (nee Straw).
Hannah died in July 1845 and so would not have been one of Bagshaw’s ‘14 widows’.

Elizabeth Bostock (nee Brown), aged 40, widow of collier James who had died in December 1840 aged 41.
She was living with her three children one of whom was her illegitimate son Thomas Bostock or Brown, alias ‘One-armed Tom’.

Also in this area was Back Lane … a very deprived and undeveloped area.

It ran parallel to Heanor Road on its west side, from Manor Road northwards, to the site of what was to be Ilkeston North Railway Station, opened in 1878.

The lane was connected to Heanor Road by a succession of ‘yards’ — these were (from Manor Road) Sisson’s Yard, Riley’s Yard and Barker’s Yard.

The article (right) writes that within the lane were five or six cottages, huddled together on a small plot of ground owned by the Duke of Rutland and were ‘a mere rookery‘.

Mentioned in the article, widow Nance Calladine had been married to coalminer William who had died in 1867…. Nance was born Ann Fisher about 1792. She died just over two years after this fire, at a registered age of 83, when she was then living in Severn’s Yard, off High Street.

Had the accident forced her to move  ? 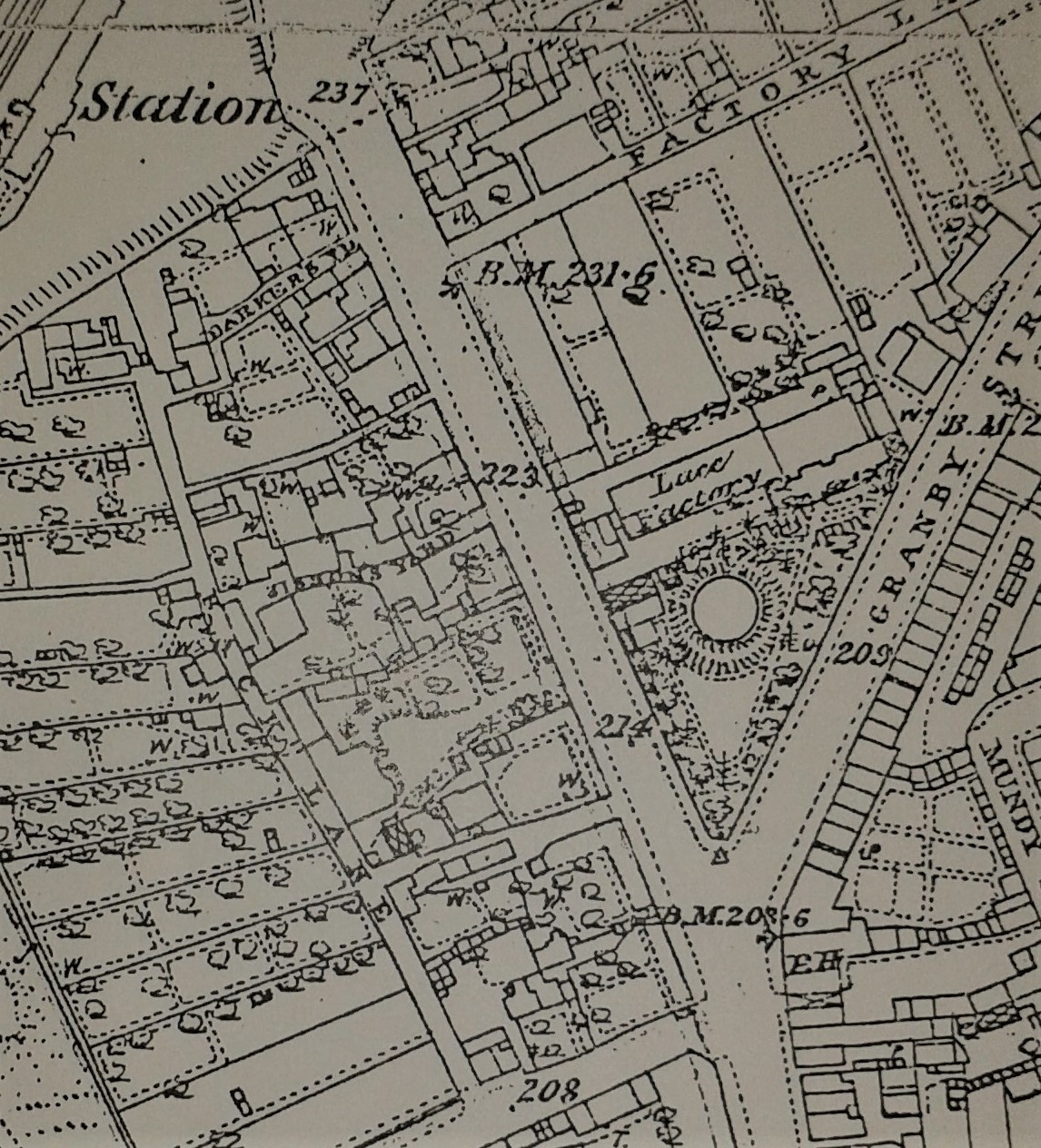 In the map above, dated about 1880, you see Manor Road (unnamed) at the bottom and from it, south to north, runs Back Lane, parallel to Heanor Road. Barker’s Yard and Sisson’s Yard are named, and between them is an unnamed Riley’s Yard.

In March 1886 the 11 freehold houses in Sisson’s Row were put up for sale by auction, as one lot. Bidding started at £400 but when offers stalled at £800 the sale was aborted.