The Partition of the Carrier Estate

Towards the end of 1856, and after the discovery of Henry senior’s ‘lost will’, legal documents were drawn up and agreed to, between the four brothers, to partition the Carrier Estate. …. this included enacting what the late Henry had wished with respect to his sons Joseph and William, as well as deciding upon other family property. 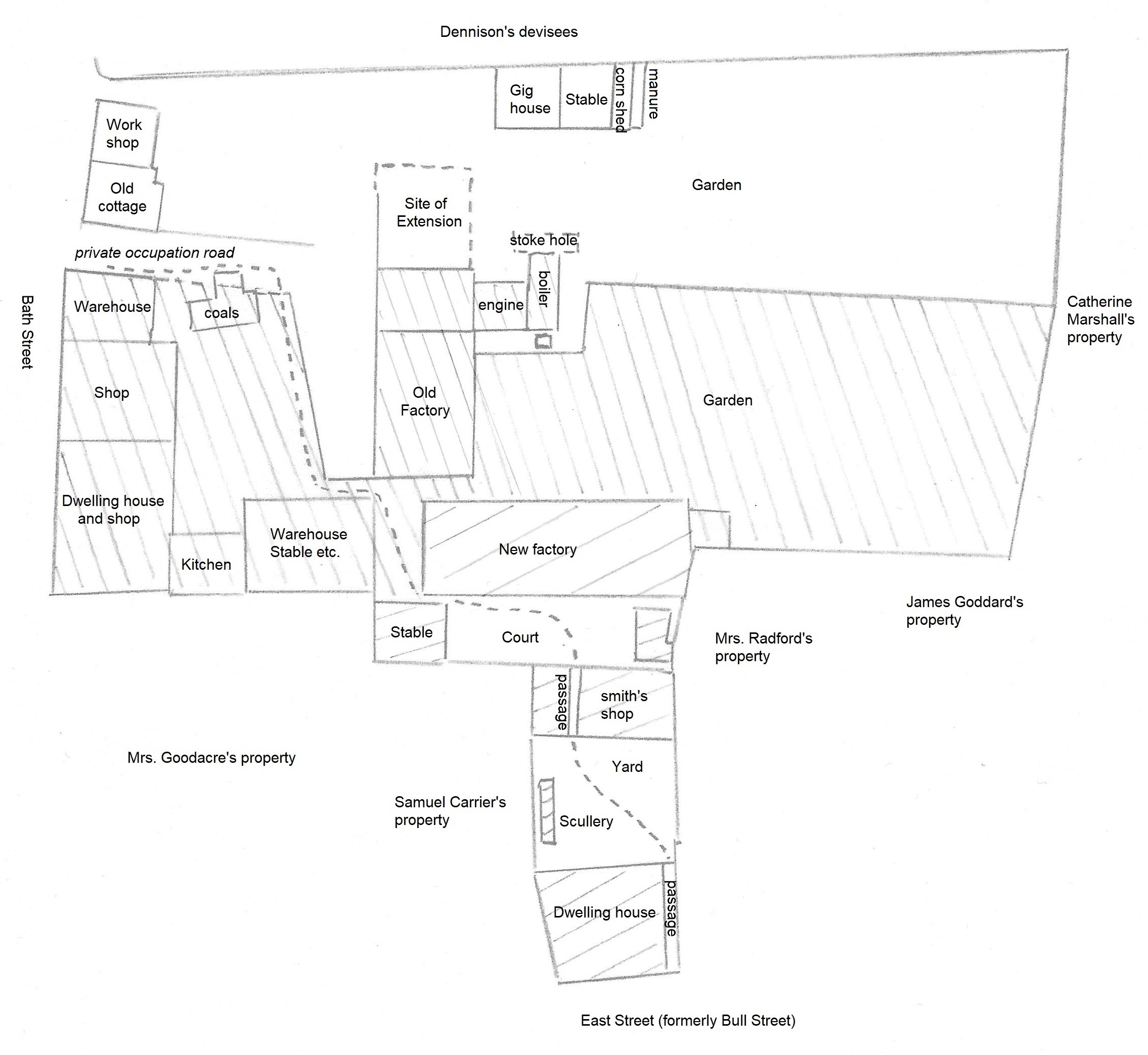 The property enfranchised in 1855 and shown in the map above was split between the four brothers in late 1856. It shows the same area as that in Plan 1 (on the previous page) … basically the north area was occupied by Henry and Samuel; the southern area belonged to William; the area in between the two was Joseph’s property.

At the same time the area shown in the plan below and held jointly by Samuel and Joseph Carrier was divided between the two brothers — William was assigned area A and Joseph got B. And it was at this time that the ‘Mansion House’ in East Street was divided into ‘three tenements’ — two houses and the County Court building ? 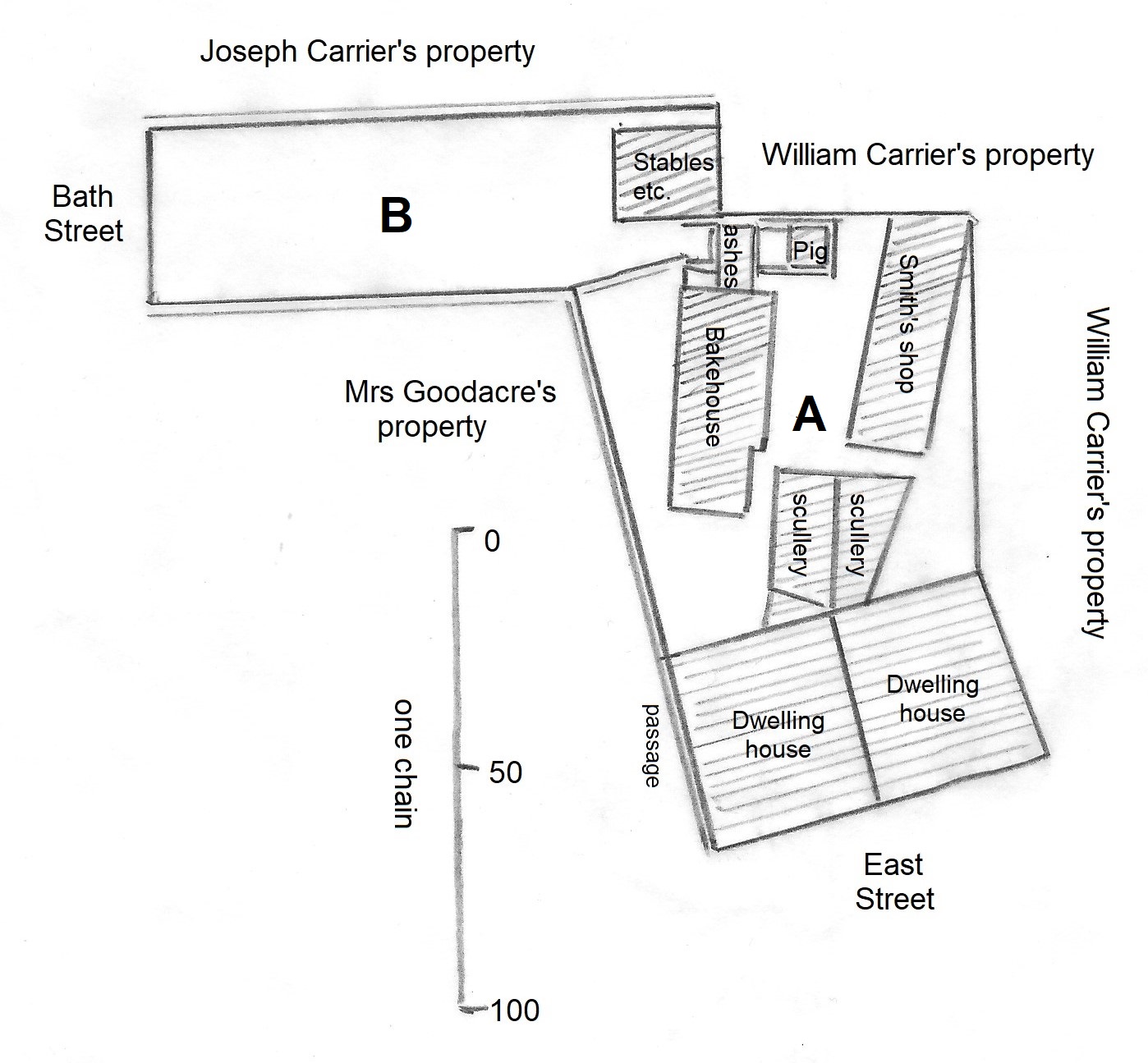 This is the same area as that shown in Plan 2 (in Part 1), though it shows more detail.

And on November 8th 1856 Samuel took out a mortgage on this property.

And then, a year later, for the sum of £2000, Samuel and Henry Carrier transferred part of their property to their brother William. This is shown in Plan 6 below (and can also be seen as part of Plan 4 at the top).

It included part of a former garden and orchard, a messuage, stockinger’s shop and outbuildings recently pulled down. Also included were three messuages and shops recently built or in the process of construction by the brothers Samuel and Henry, plus outbuildings. These were the ‘three empty shops’ that we have just passed. Also in the conveyance was a new factory, just built, by the same brothers, with all its fixtures and machinery. All this property can be seen as the lined area on the plan. 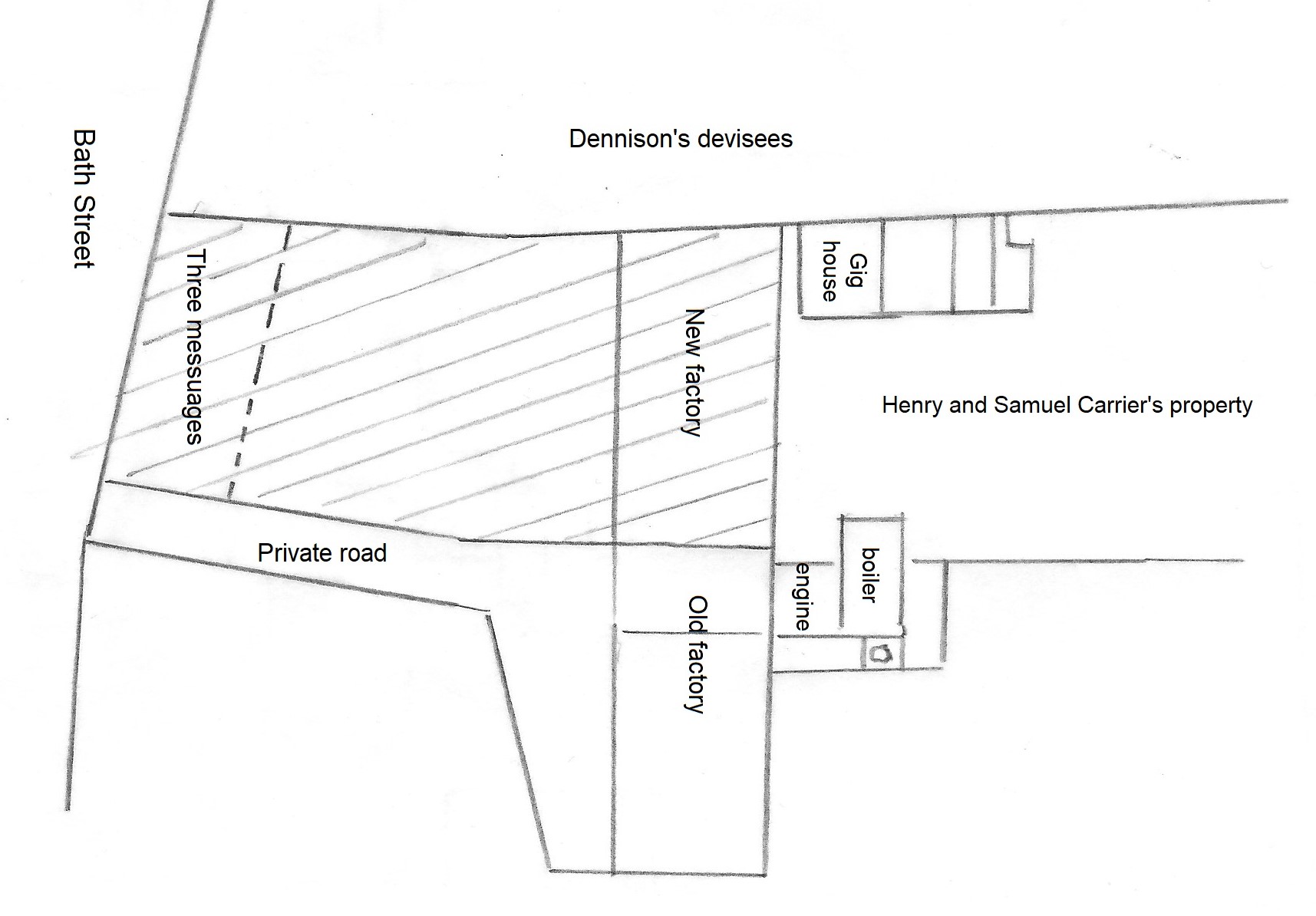 It seems that on the following day the two brothers then mortgaged all (?) of their property, shown in the map below.

On February 16th 1858 William Carrier died. Part of William’s South Street property was subsequently sold to William Gregory. But what to do with the rest ?

On October 10th 1859 it was decided among the family that all this property would be divided between his three brothers and his nephew Henry Macdonald, the son of his deceased sister Ann. William’s estate comprised his share of the three messuages in East Street (remember those ? — previously rented by John Eminson, Thomas Scattergood, and Anchor Carrier, then by Henry Carrier, Joseph Knighton and Widow Blount, then by James Brentnall, John Woodroffe and Mary Askew — and now occupied by Thomas Harrison, James Scattergood and Henry Eminson); the two workshops at the bottom of that area; a factory and yard on the adjoining land, now rented by his brothers Samuel and Henry Carrier, and his nephew Henry Macdonald. These can be seen on Plan 4 (above), at East Street. There was also land and four dwellings in South Street (Pleasant Place). All of this was to be now in the possession of Henry and Samuel Carrier, and nephew Henry Macdonald. At the same time brother Joseph Carrier took possession of the remainder of the late William’s South Street holding which was north of Pleasant Place and just south of the strip recently sold to William Gregory. He also gained the Extension Street land plus the six dwellings there which William had erected, (then occupied by William Beniston, John Blake, Joseph Bryan. Francis Crooks, Norman Straw and Isaac Martin). This area was what was known then as the ‘South end of the Hayes’.

On June 9th 1860 Joseph Carrier took out a mortgage on all his Bath Street property (shaded in Plan 8 below) and four months later took out a second mortgage on other property. The hosiery warehouse, in the northwest corner, was being used by his brothers Samuel and Henry at that time.