From the Independent Chapel in Pimlico (just off the right of the photo below) …. 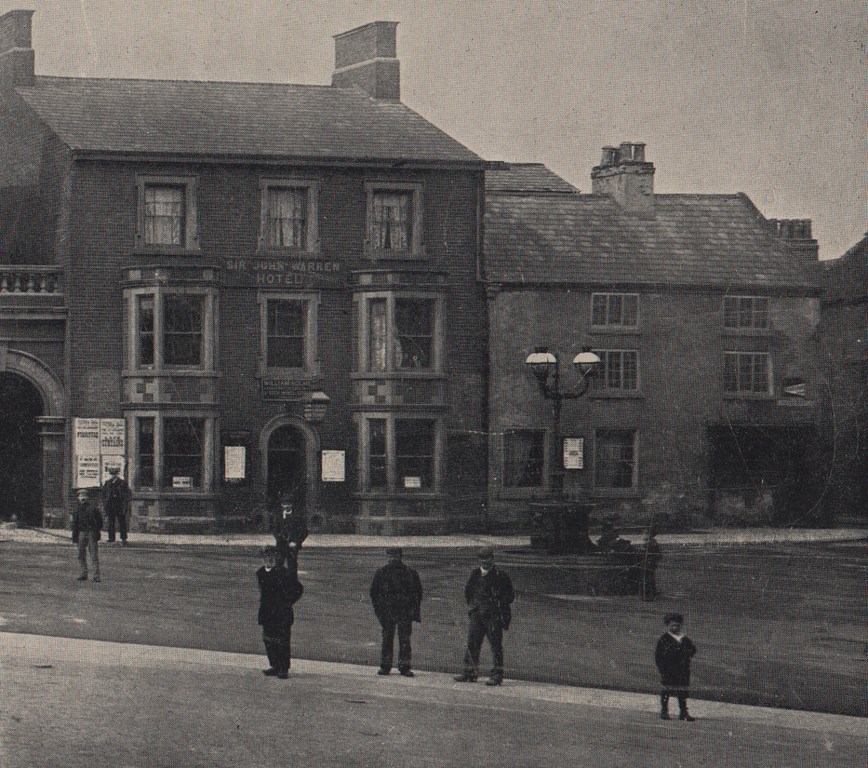 In 1797 Isaac Attenborough bought the five cottages on this site, pulled down two of them and built stables on their site. He converted the other three into an inn and the family lived there until 1878. (Waterhouse) 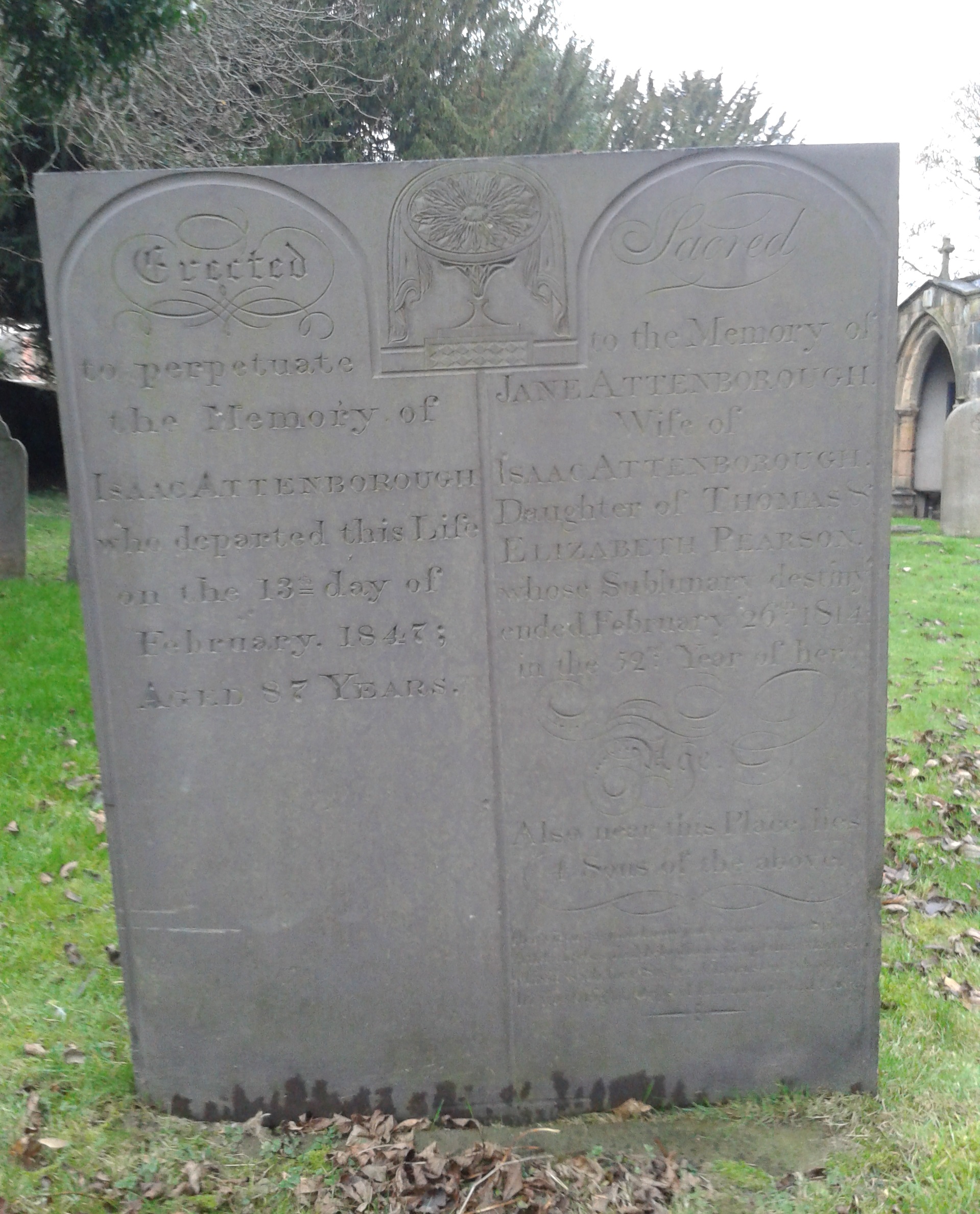 This gravestone is to be found at St Catherine’s Church, Cossall.

On the left it reads ‘To perpetuate the Memory of Isaac Attenborough who departed this Life on the 13th day of February 1845; Aged 87 Years’.

On the right we see ‘Sacred to the Memory of Jane Attenborough, Wife of Isaac Attenborough, Daughter of Thomas & Elizabeth Pearson whose Sublunary destiny ended February 26th 1814 in the 52nd Year of her Age. Also near this Place lies Sons of the above’.

I believe that Jane Attenorough is buried in St. Mary’s Church, Ilkeston.

Adeline writes that …. The Sir John Warren Inn was the home of the Attenboroughs.
Isaac was the landlord. He had three sons, and two daughters.

Here Adeline seems to be referring not to Isaac but to Mark Attenborough. The latter was the son of Isaac — mentioned by Edgar Waterhouse (above) and whose gravestone we can see (also above)

Born in 1788 Mark was a son of farmer and cattle dealer Isaac and Jane (nee Pearson) and is variously described as publican, victualler, maltster, farmer and cattle dealer at Warren’s Arms or the Sir John Warren.
In November 1825 he married Alice Mitchell eldest daughter of William and Sarah (nee Hously). Her family had moved from Calverton in Nottinghamshire to settle in the Pimlico area; we shall meet other members of this family shortly.
Alice died in April 1849 and her husband ten years later.
Both were buried at St. Mary’s church.

Just over six months before his death Mark was presented by members of the Rutland Lodge of Oddfellows, Manchester Unity, with a portrait of himself, the work of John Brassington, portrait painter of Friar Gate, Derby. At the ceremony and presenting the portrait, Dr. Norman spoke warmly of Mark; “none could surpass the integrity and uprightness which had marked Mr. Attenborough’s long career of life… it approved itself to all; to the members of that Lodge especially, whose treasurer he had been for a period of thirty years…”.

Also present at the ceremony was the Rev. Ebsworth, receiving the gift on behalf of Mark – who was too ill to attend — and who added “I believe he has gained the respect of all persons in the parish of every shade of party or politics, and that his character is best told in the words ‘An honest man’s the noblest work of God’. I have no doubt the family will regard the gift as an heirloom, and long cherish the kindly feelings of those by whom it was tendered”.

The children of Mark and Alice 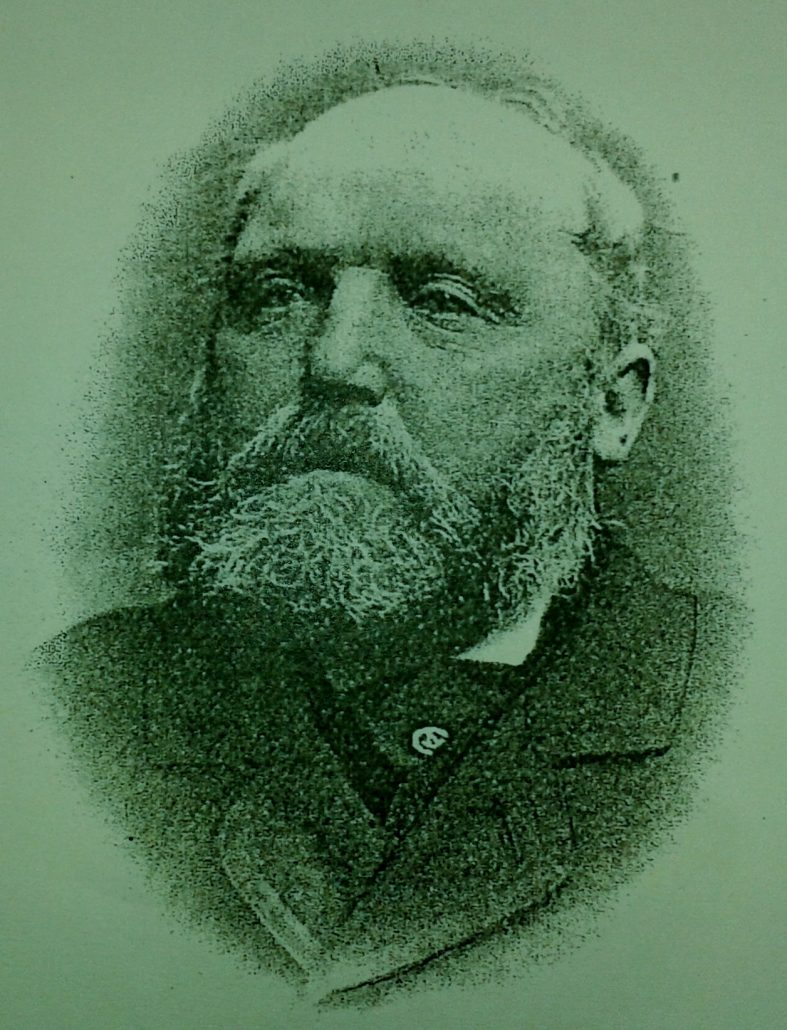 Trueman (1) records that the eldest child Isaac was born at the hotel on April 2nd 1826 and married Sarah Beardsley of West Hallam in 1850. She was the daughter of West Hallam farm labourer Edward and Dorothy, and already had an illegitimate son, Thomas Attenborough Beardsley born in 1843. At least nine further children followed after the marriage.

Isaac was the landlord of the inn after his father Mark, and during his lifetime held many positions of authority —  serving as Overseer of the Poor, Guardian of the Poor, Churchwarden, member of the Local Board and its Chairman 1882/3.
On Isaac’s election to the latter position, ‘Rambler’ described him as “one who can point back to many long years of practical work on behalf of the parish – a man of few words, but possessing a decision of character eminently useful in the task of controlling a Board which habitually treats the ordinary rules of debate as a dead-letter, and constantly exhibits a tendency to reopen the discussions of questions already decided”.
The writer concluded that Isaac was “a man of business uninfluenced by those petty considerations which mar the administrations of affairs by those who fix their eyes on party aggrandisement”.

Isaac also acted as treasurer of the Ilkeston Farmers’ Club and was a regular exhibitor at its shows.

He played for the Rutland Cricket Club and was its president in later life.

Isaac’s eldest legitimate son was Mark who was educated at Derby Grammar School and in 1868 passed the Incorporate Law Society’s preliminary legal examination in London. He later served as an articled clerk to Edward Humphreys, his solicitor uncle (by marriage).

Born in 1859 Isaac’s son Edward lived and worked at the Inn. In 1884 he married cotton winder Sarah Ann Walker of Park Road, the daughter of labourer Richard Joseph and Ann Gregorywall Pilkington (nee Bullock). His wife had an eight-month old illegitimate son, Edward Walker. (This son later adopted the name Edward Walker Attenborough and in 1913 he married under that name, citing Edward Attenborough as his father).
About 1888/89 Edward Attenborough became landlord of the Horse and Groom Inn at Gallows Inn and died there in 1890, another Ilkeston victim of cirrhosis of the liver.
In 1898 his widow married stationary engine driver and widower David Short.

Isaac began to build a large house in Market Street for his family in the autumn of 1878 and subsequently moved there.
His wife Sarah died at that home in February 1890 and in the following year Isaac married his second wife, his housekeeper Lydia Duro, daughter of Mapperley coalminer Joseph and Ann (nee Beardsley) and 44 years his junior.
Lydia’s mother was the sister of Isaac’s first wife.
Thus his sister-in-law became his mother-in-law, and his niece by marriage became his wife.

Isaac died at his home in Market Street in August 1894. Four years later his widow married lacemaker George Spencer who at the turn of the century was the landlord at the Borough Arms in Bath Street.

2. William and Thomas were noted cricketers.

It is unlikely that the two other sons, cricketers William and Tommy, got knowledge of the game from father Mark who possibly didn’t know which end of a cricket bat to hold.

Second son William was a good local cricketer, a left-handed bowler and batsman, but it was younger brother Tommy who stood out at the sport. We shall meet Tommy again at the Gallows Inn end of Nottingham Road.

We shall also meet his brother William in Nottingham Road. (See the Horse and Groom Inn).

4. Sarah became the wife of Mr. Humphrey, a solicitor in London.

Friday evening and six-year old John Foster, illegitimate son of Esther Ann and grandson of Bath Street cattle dealer John ‘Milko Jack’ Foster, was tending a horse and cart outside the Sir John Warren. Something startled the horse which then galloped off down Pimlico and crashed with great force against the iron railings in front of the Independent Chapel, knocking the cart over onto its side. John was thrown to the ground and dragged along for several yards. Eventually the horse became entangled and it too found itself on the ground.

John was very shocked and suffered a broken leg.

In the latter half of 1879 William Ball became landlord and in February 1882 the licence was transferred to Edwin Hall.

Next door to the Warren were at one time a row of cottages.