As we leave behind the Hooley family Adeline introduces us to a very renowned Old Ilkestonian.

“After we cross the old canal bridge, the next house was where Mr. Thomas Attenborough lived. He was a cattle dealer, also a noted cricketer. He had one daughter, Alice.
Below their house was a row of cottages with large gardens in front of them. These cottages were demolished very many years ago”.

Born at the Sir John Warren Inn in the Market Place in June 1833, Thomas Attenborough was the youngest son of licensed victualler, maltster and farmer Mark and Alice (nee Mitchell).
He married Mary Sisson, daughter of collier William and Mary (nee Stirling), in 1854, a few months after Mary had given birth to their illegitimate son, William Attenborough Sisson.
Their daughter Alice was born in the following year.
They then lived at the bottom of Nottingham Road, in the Gallows Inn area, where Thomas traded as a cattle dealer.
When Mary died in December 1874 Thomas continued to live there with his daughter Alice.

About 1881 Tommy formed a ‘partnership‘ with butcher and cattle dealer George Rigley of Granby Street but it was not very civil.
In September of the following year the pair ended up in Derby Borough Police Court where Tommy accused George of assault — the latter had poked his partner in the chest with a stick while at the Derby butter market. This poke cost George a 10s fine with costs, and led to the Derby Daily Telegraph describing the two as ‘cantankerous Ilkestonians‘.
After leaving court Tommy visited Spencer’s Vault’s in town (that of George Spencer in Albert Street?) — to celebrate? — but he was followed by George’s wife Alice (nee Belton) who, taking a leaf out of her husband’s book, assaulted Tommy with her fists and then her umbrella. With his face bruised and forehead bleeding, the cattle dealer returned to court to obtain a summons, this time against Alice.
A week later Alice was at the same court as her husband had been, charged with the same offence, resulting in a similar fine — despite the fact that she claimed that Tommy had provoked her with jeers about his recent ‘victory’ over her husband…. ‘he had done the husband and he would do the ‘missus’ next!!’
In between these two Derby assaults the ‘partner’ cattle dealers were at it again but this time in Ilkeston. Tommy was walking up Bath Street when George approached, knocked him down and had to be restrained by the police from a further attack. And another fine with costs.

In August 1882 Thomas married again, to Sarah Ann (nee Holland), ‘widow’ of Henry Robey, at St. Nicholas Church in Nottingham.
She was the oldest child of  Nottingham machine smith William and Elizabeth (nee Marsden), born in 1850 at Radford.
But was her marriage to Thomas premature and bigamous??
Her first husband, Henry Robey, was the older brother of John Robey of Robey’s Yard off South Street and like him, Henry traded as a market gardener, but lived at Mill-in-the-Hole in Basford. Over 30 years her senior and married (and widowed) twice before, Henry had married Sarah Ann Holland in May 1874.
At the time of his ‘widow’s’ marriage to cattle-dealer Thomas in 1882, Henry was still alive ….  an inmate of the Basford Union Workhouse.

In December of 1882 Ada Annie Robey Attenborough was born to Tommy and Sarah Ann.
A son, Thomas Isaac, died in infancy in March 1887 from diphtheria.
Both were registered as legitimate births.

In August 1887 the cattle dealer was once again in court … but this time the Derby Bankruptcy Court.
Tommy had started his business several years before with a capital of £1500 but now that sum, and more, was all gone — through bad debts.

It appeared that Tommy did not keep a close eye on his accounts, on his receipts and payments … although at least he knew that he was probably solvent in 1880, the last time he took stock of his position !!

On the 1891 census Tommy and Sarah Ann are recorded as husband and wife although alternative evidence suggests that on other occasions their ‘marriage’ remained clandestine.
For example, in October 1884 they both appeared at Ilkeston Petty Sessions, charged, under the names of Thomas Attenborough and Sarah Robey, with assaulting their neighbour Elizabeth Smith after an argument over the rent which they owed to her.
Both were found guilty and fined.
In February of the next year Tommy was defendant in a civil case at Nottingham Assizes, when grocer Thomas Smith, husband of the previous Elizabeth, sued him for money which he claimed was owed to him by the cattle dealer.
In these proceedings Mrs. Sarah Ann Robey gave evidence, styling herself as Tommy’s ‘housekeeper’.
Tommy won this case by the way!
And in yet another case — at Ilkeston Petty Sessions in March 1886 — when Tommy faced a claim for unpaid wages from Thomas Barker, his former servant, Sarah Ann was referred to as ‘Mrs Attenborough, who struck (Thomas Barker) with her sweeping brush, and told him to go away as quickly as possible’ (or words to that effect!!) And another case dismissed in Tommy’s favour.

In 1887 Henry Robey died and at the end of 1891 Tommy and Sarah Ann went through a second marriage ceremony, this time at Basford Register Office.

Tommy was an outstanding cricketer who batted right-handed and bowled with his left, with no run-up, just standing at the wicket. He delivered the ball with ‘a peculiar twist so puzzling to batsman that the effect was too often apparent in the shattered wicket’.
A nineteenth century Muttiah Muralitharan perhaps?

Tommy had played cricket as a lad, developing into a very good all-rounder who captained his Nottingham school, played for junior clubs and then joined Ilkeston Rutland Club in 1849, aged 16.
Edwin Trueman states that in 1851 he played for an Ilkeston and District Twenty-two against an all-England Eleven at the cricket ground in Market Street, and in that match had the distinction of bowling out George Parr first ball, the latter being regarded as the finest batsman in England at that time. (Trueman 3)
Tommy did play in that match but took no wickets at all, in either innings — not surprising as he didn‘t bowl a ball.
However the scorecard of the corresponding match for 1852 does show George Parr bowled by Tommy in the second innings, after having scored one run.

Tommy’s first-class career for Derbyshire lasted from 1871 to 1874, though he continued to play for the Rutland Cricket Club and topped their batting averages in 1886.  (220 runs scored in ten innings, two not outs, giving an average of 25). This earned him a silver teapot, a new cricket bat and half a crown, all presented at the annual Club dinner of that year.

At the 1893 annual meeting of the club Tommy spoke to confirm that he had been a member for 45 years although the first scorecard showing his name is dated 1852, in a match against Nottingham Commercial Club.
In his speech he mentioned an away match against Southwell on September 8th and 9th 1856 when he ‘stood for four hours against Jackson’, the ‘demon bowler’ of Nottinghamshire County Cricket Club and an All-England bowler. The Southwell team had engaged professional cricketer John ‘Foghorn’ Jackson at a cost of £5 but after the first innings the Ilkeston side led by 23 runs. In the second innings Southwell scored 94 and then got to work on the visitors, such that Ilkeston were reduced to 15 for 5 wickets.
Having seen what Jackson could do, several of Rutland’s now ‘out’ players left for home to report their defeat. Tommy however was still at the wicket and at the end of his lengthy innings, he was caught at point for 17.
There was further stout batting by the remainder of the team and it was left to Tommy’s brother, William, to hit the winning runs!!

In 1857, in a match between an All-England Eleven and a Derbyshire Twenty-two, Tommy and his brother William offered an Ilkeston presence in the county team, alongside John Paxton and Isaac Gregory.
Such matches had begun about 1848 and were held each year.

Even at the age of 70 Tommy still enjoyed turning over his arm and taking up his bat, and seemed happy and content, living with his daughter Ada Annie and son-in-law Herbert Nicholson at 246 Nottingham Road. However in 1905 he broke a finger and probably never played cricket again. 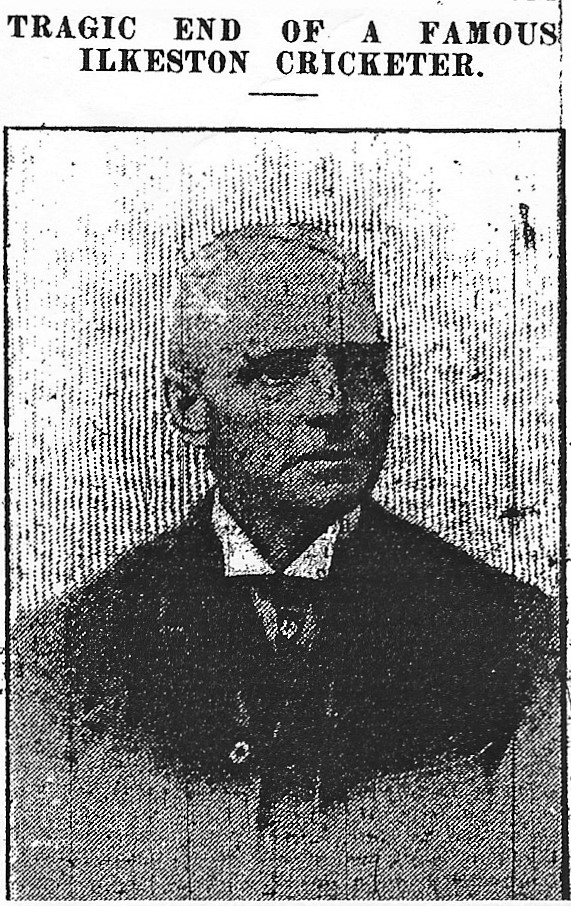 from the Ilkeston Advertiser, January 25th 1907

Perhaps his domestic harmony made more shocking and sensational what happened on January 21st 1907.
While the rest of the household slept, Tommy came downstairs, went into the kitchen, took a carving knife and cut his throat, with fatal consequences. He was found in the morning, dead and cold lying by the back door, by his son-in-law Herbert.
The inquest, held the following evening at the Horse and Groom Inn, heard from daughter Ada Annie that her father appeared in his usual health although he had seemed depressed in the last few days, complaining of pains in his head. It concluded that Tommy would have died within moments and could only speculate upon the motives for his suicide.

A few months after her father’s ‘suspect’ marriage in 1882, Tommy’s daughter from his first marriage, Alice, married forge worker Mark John McTigh.
Shortly after the birth of their daughter Alice Mary in March 1883 the McTigh family left for Derby and towards the end of the decade for Walsall, Staffordshire, close to where Mark John had been born. And it was there that he was to die, in 1888, before the birth of his only son, Mark Attenborough McTigh.
Widow Alice and her four children then returned to Ilkeston to live in Park Road.
She was still there – at number 23 – when she died in December 1921, aged 66.

The Attenborough family had a strong connection with the Horse and Groom Inn.