Adeline recalls the buildings next to the Sir John Warren inn …

“At the beginning of Pimlico, next to the Sir John Warren Inn, was a plain windowed shop, linked with three cottages built on the original bank. (This was where the Town Hall now stands). These were separated by walls, and approached by steps.” 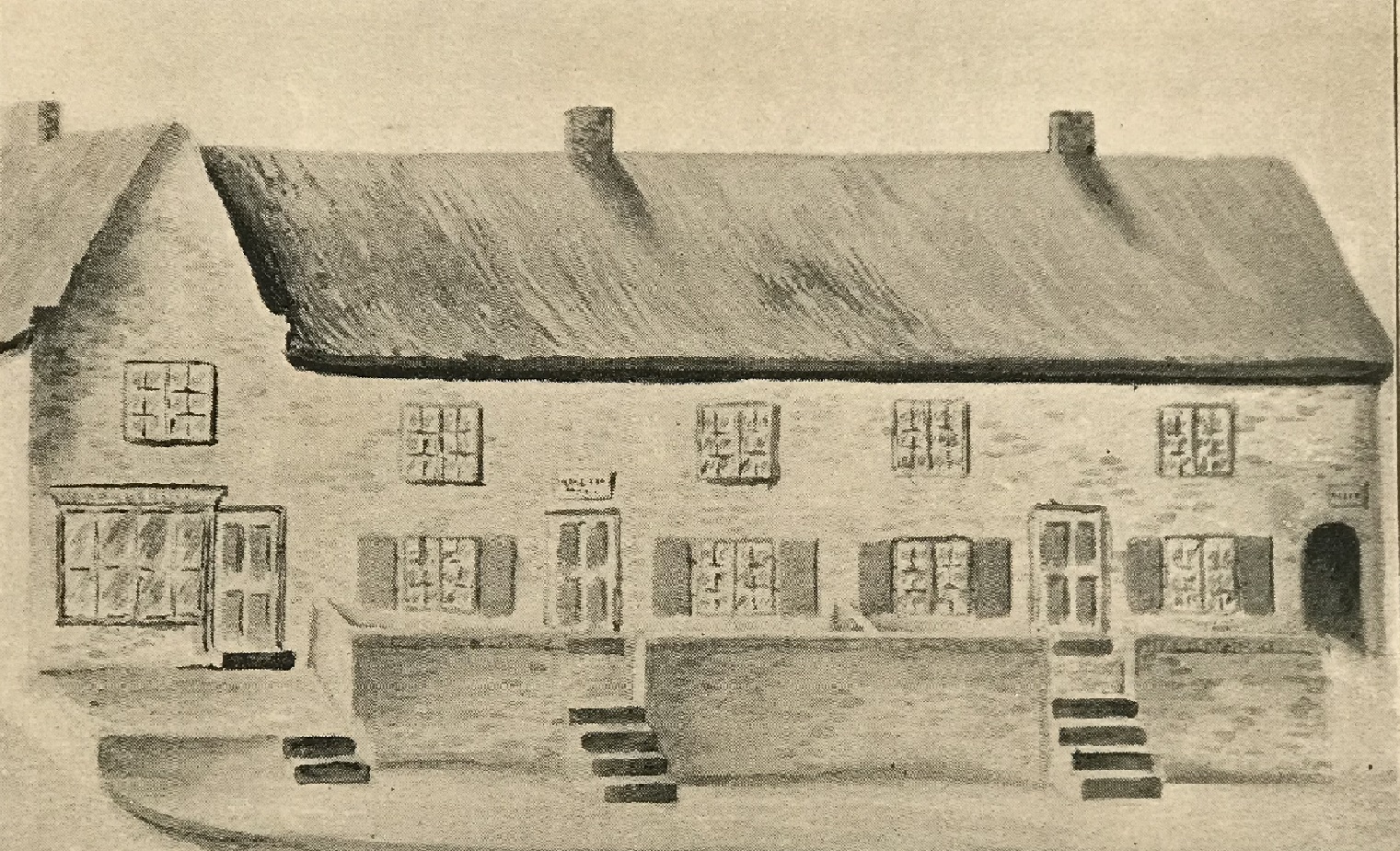 A sketch purporting to show the town hall cottages

“The first, for some time, was occupied by Fred Mitchell and his family. Fred was a shoemaker.”

Born in 1832, Fred Mitchell was the elder son of Abraham and Ann (nee Campbell), South Street shoe makers, menders and vendors, and the nephew of Alice Mitchell who had married Mark Attenborough, next door.
In 1852 Fred married a West Hallam-born girl, Cassandra Lee, daughter of framework knitter George and Judith (nee Wheatley).
After the death of his widowed mother in 1871, Fred and family went to live in the family home in South Street.

He had four children.

—   Emma, who married a Mr. Clark,
Only daughter Emma married Leicester-born clerk George Samuel Clarke in November 1873 and for a time the couple continued to live with father Fred, providing him with grandchildren, George Augustus, Agnes Gertrude, Frederick William and John Edward, before Fred died in August 1884 in Gladstone Street, aged 52 and five years after his wife Cassandra.

—   Harry and Aby or Abie
Two other sons were Henry (Harry) and Abraham (Aby or Abie) Campbell, the latter being given the surname of his paternal grandmother.
Harry worked as a shoemaker/boot repairer in Ilkeston and married Frances Louisa Bourne in 1884.
Abraham Campbell married Mary Cockayne, daughter of glove hand William and Mary (nee Henshaw) in February 1882, whilst working as a lace hand at Long Eaton — where the family remained for a few years before moving back to Ilkeston in the mid-1880s.

—    Fred and Cassandra had two other sons …..William Campbell and Thomas Campbell … but both died in infancy as did daughter Sarah Ann.

Also living in Pimlico and trading as a shoemaker was Frederick’s uncle William.

“The next tenant was Mr. Mather, tailor.”

Pigot’s Directory of 1835 lists Thomas Mather, tailor, living in Ilkeston, while the 1841 and 1851 censuses show him in Bath Street, residing with Mary Gregory (nee Skevington), widow of Isaac and daughter of Robert and Elizabeth (nee Garton).

In December 1851 Thomas married Elizabeth Straw, daughter of miner Joseph and Hannah (nee Shaw) of Club Row.
Elizabeth brought to the marriage her two illegitimate sons — John (born in 1847) and Thomas junior (born in 1849) — both of whom continued to live with their mother and adopted the Mather family name.

In September 1855 Thomas junior was riding a donkey near to the gas-works when he fell off and broke his arm.

In employment John was also a tailor while Thomas junior was a miner.

Subsequently the family grew and moved into Albion Place, thence into the Market Place while the 1861 census shows them in South Street, at the location suggested by Adeline.
The family remained in this area for many years but moved into Burr Lane in the early 1880’s.

Whilst trading in South Street, Thomas and Elizabeth seem to have supplemented the family income by selling groceries.
One Saturday morning in 1872 Elizabeth was in a back room folding clothes when she heard someone at the shop-door. She looked through into the shop and saw a stranger lean over the counter, take a loaf out of the window and leave the shop. She followed him out, shouting ‘Police’, and overtook him in the street, just as he was tucking into the bread. Grabbing his jacket, she challenged him and asked why he had stolen a loaf.
“Because I was hungry”.
P.C. Baker then arrived on the scene just as the thief took another mouthful, and an arrest was made.
In court a few days later the prisoner — a young man named John Scott — told a sorry story. He had recently been at Leeds where he was laid up with fever for two months, and then, with a couple of shillings in his pocket, he had left to make his way to Birmingham. Just over a week ago he was in Southwell, with only a couple of pence left, and travelled to Ilkeston where he arrived, soaked to the skin, and tried to get a bed at the lock-up.
On the Friday he had hardly anything to eat and wandered the streets that night before stealing the bread the following day, a crime which brought John some relief — as he was sentenced to a week in prison.

During a violent summer thunderstorm in June 1880 a large piece of stone from the parapet coping of the United Methodist Free Church School-room was dislodged and smashed through the roof of Thomas’s shop next door and into his bedroom. Fortunately it was early evening and the bedroom was vacant.
Lightning from the same storm entered a telegraph wire at the Market Place post office, lifting up the pavement outside the Old Harrow Inn where the current entered the ground. Damage was also caused to the roof of labourer John Lally’s house in Extension Street while a fire was started in the roof of the General Havelock Inn which also lost a chimney stack.
Perhaps one of the very few people out during the storm was Irishman ‘Deaf Jack’ who was unluckily knocked down, close to his lodgings in South Street by Richard Birch Daykin’s hansom cab, one of the very few vehicles out at the time. Being deaf, Jack had not heard the approach of the cab.

Fanny Eliza was born in 1852 and Frank alias Samuel Francis in 1858, though these were not the only other children in the family.
Fanny married lacemaker Charles Trott in August 1870 and went to live in Lenton while Frank, also a tailor, remained in Ilkeston.

Another in the family, two years younger than her sister Fanny, was Martha Ann who married needlemaker George Huskinson Bartlam in 1877 — we met briefly with George earlier in East Street.
After marriage they lived in Belper Street and Martha Ann died there, at number 41, in 1941.

Other surviving children were Herbert, Betsy and George.

“Mr. Rice opened the third as a grocer. The wall had been taken down and a large window put in the front room. He afterwards removed to the shop on south side of Park Road.”

Samuel Rice was the son of tailor Richard and Hannah (nee Meer) and worked as a stone miner.
Having previously lived in Bath Street, Chapel Street and Club Row, in the mid 1860’s he was living in the Market Place and a few years later was styled as a grocer.
By 1868 he was trading as such in Park Road.
In March 1860, still working as a miner, Samuel had married Mary Shaw, the daughter of labourer William and Mary (nee Mather). Thomas Mather was her uncle.

This Market Place shop had previously been occupied by William Robinson, needlemaker, before he moved to Extension Street. His son Samuel Robinson was born on the site of the future Town Hall on November 24th 1855 — a Hall where he was to preside as Mayor in 1898.

Also in one of the cottages was joiner James ‘Jimmy’ Johnson, alias ‘’Squeeze-me’, and his family who lived there before moving to Ebenezer Terrace in the late 1850’s.

A Victorian Bonfire night on the Market Place

Old Resident recalled this part of upper Market Place as the principal celebration scene for Bonfire Night. (about 1860)
“A large bonfire blazed on the Church hill, cannons were fired with a frequency which produced a veritable bombardment: and the proceedings always closed with a rolling of a blazing tar-barrel for some distance down Bath-street and South-street, presenting a very fine spectacle. Of course, anyone who pleased brought material to feed the bonfire, and I am afraid fuel was sometimes requisitioned which led to much damage being done. I don’t mind confessing now – as it is more than 55 years ago – that an old schoolfellow of mine (William Flint) assisted me to pull up a gate post near his home, and convey it in triumph to the Market-place where we handed it over to ‘Jimmy Johnson Squeeze Me’, who was for some years the official who periodically stirred up the fire in order to produce ‘another spark’”. 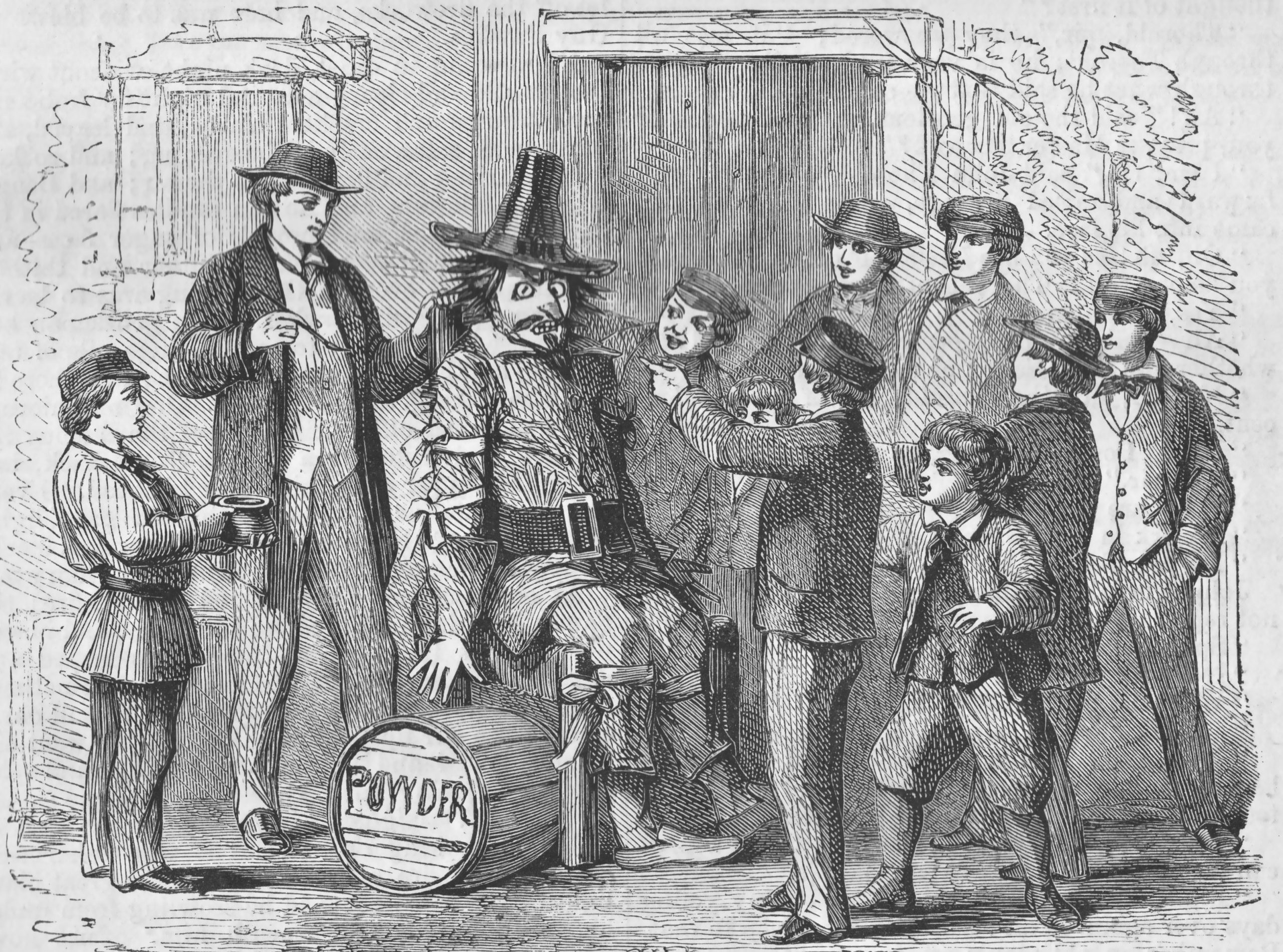 The Ilkeston Advertiser reinforced this.. picture of the magic 'fifth'' in the Ilkeston of the 1860's..
"Roaring bonfires were piled up on every plats of terra firma, round which the grimy collier lads disported themselves in an abandonment of glee. Every few minutes the eyes would be greeted with the flash of a rocket as it sought the heavens, and the merriment was universal". 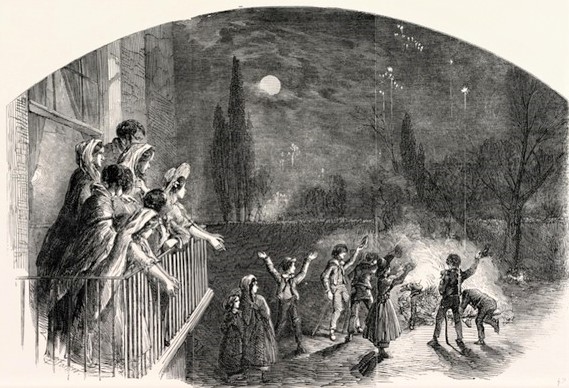 By 1881 however the picture was different.....
"The boom of a heavier piece of ordnance than a toy cannon was very rare indeed, and the sharp crack of the 'wick wack' was equally conspicuous by its absence.... Old customs are fast dying out". (IA 1881)
..... and the newspaper  suggested that the revolution brought about in Ilkeston's social life by the railway was the main cause of this change.
As a footnote the Advertiser was sure that 'the decay of this custom' would lead to a number of lives being prolonged.

We shall now walk across the Market Place and back to East Street to meet up with George Bunting and his neighbours.