Traffic warning. 1pm. April 3rd 1878. Just after having his dinner five-year old George Thorley went to play outside his home at 15 Brussels Terrace. He ran out of the terrace, into Bath Street and did not see the horse-drawn omnibus, driven by George Spowage on its way to the Great Northern Station in Heanor Road. The driver however saw the lad and shouted to him, but it was too late. The boy stumbled, fell under the ‘bus and the front wheels crushed his chest. Carried back home, bleeding about the head, the boy was laid down by his mother Tamar (nee Fulwood) and then asked his sister Fanny to turn him over, so that the blood might flow out of his ear. He wanted to see his father Henry but before the latter could arrive from work his son was dead. The Pioneer records that the accident resulted in the lad’s ‘instant death’ --  the Telegraph extended that to one hour.

George Spowage or Spouge conducted his carrier business from the stables of the Rutland Arms Hotel and 12 Mundy Street. He was declared bankrupt in February 1879 at which time his erstwhile weekly advert disappeared for ever from the front page of the Ilkeston Pioneer. In March his assets were liquidated to pay creditors.
Richard Birch Daykin then replaced George’s trade at the Rutland Hotel stables.

In May 1873 James Burton was lodging in the Terrace and was relaxing on the sofa when into the house wandered Mary Ann Riley. After speaking to James briefly she left the house, when the lodger noticed that his pocket knife, which he had recently been using, had disappeared. He charged Mary Ann with stealing it but at Ilkeston Petty Sessions she was discharged, primarily because the lost knife had not been recovered.
Less than a week later Mary Ann appeared at Heanor Petty Sessions, charged with ‘wandering abroad, and of having no means of existence at Ilkeston’.
For about a fortnight she and her son, aged about two, had been living ‘rough’, sleeping in outhouses and cabins wherever they could. On several occasions she had been asked to leave the town and now she was to be imprisoned for two weeks.
Prior to her imprisonment Mary Ann had given the boy away to a local watchmaker, “occupying a respectable position in Ilkeston, who had adopted it as his own, so that it was now much changed for the better”.

One old resident of Brussels Terrace was William Drury Lowe, born about 1808, son of Nottingham Road joiner and brewer Christopher and Mary (nee Allen) and brother of ….

—  John  Lowe, at one time gentleman farmer of Larklands House.

At one time William Drury Lowe owned substantial property at Gallows Inn and had been a successful wheelwright with a respected reputation as an excellent craftsman. However he seems to have been a black sheep of the family …… his ‘intemperate habits’ had led him into hard times, his property being gradually lost.
Local gossip suggested that some members of his family taunted William that he would never have enough resources to afford his own coffin when he died. The wheelwright was determined to prove them wrong and so before he ‘departed this mortal coil’ he built his own bespoke coffin, complete with breastplate bearing his name, date of birth and a blank space … to be filled in later!!
This coffin was kept in its own wooden box and proudly stood in one corner of his front room.
Further financial difficulties and bad debts for William in the early 1880’s led the bailiffs to his Brussels Terrace door when they carted off his funerary box.
Though not before William had shown his displeasure by pasting one of the bailiffs.
And this led to even more financial difficulties as he then found himself at the Petty Sessions with a subsequent fine of £1 with costs.

Less than two weeks later, on a Thursday early afternoon in May 1882, William took a steady walk down Derby Road towards Straw’s Bridge.
Less than two hours later his lifeless body was discovered in the Nutbrook Canal by miner George Moon of Pewitt Wharf.
His jacket and hat lay undisturbed on the tow path there.
In his pockets was found a short note … “I am nothing but a murdered old man!” … and one halfpenny.
Unable to record a verdict of suicide, the inquest jury returned an open verdict of ‘Found drowned’.

P.S. William never did pay his Petty Sessions fine.
P.P.S. His prepared coffin was reclaimed and he thus slept ‘at last encased in his own handiwork’.

Here is Brussels Terrace, and as we walk on, up Bath Street (on the left) there is no a lot to see, except Twells’ Field 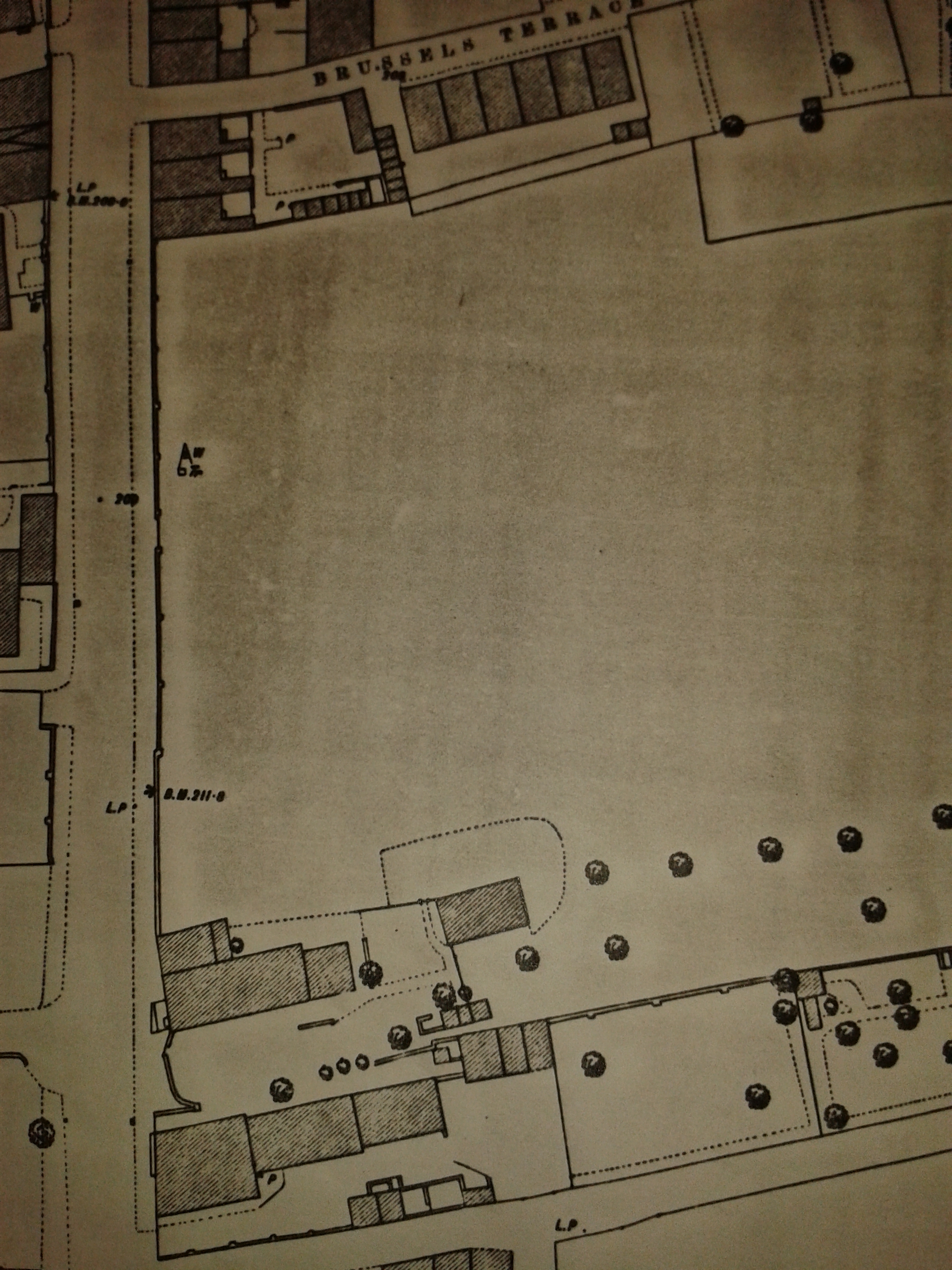 The quiet and worthy Twells family.

Here was Twells’ field, which ran parallel to Bath Street

We are now almost opposite the Poplar Inn.
Twells’ field lay between Brussels Terrace and Northgate Street, stretching from Bath Street to the Durham Ox Inn.

Colliery manager John Twells and his wife Catherine (nee Buckland) were prominent Baptists, “very quiet, worthy people, and had the respect of all who knew them”. (Bath Street)
John died in November 1833 and his son William – born in October 1821 — continued to live with his mother at the Bath Street home. It is he who is Adeline’s ‘Mr Twells’ who ‘died in early manhood’.

William was apprenticed with John Mellor, butcher of South Street.
For his first wife he married Ann West in 1849. She was born into the Baptist family of Market Place drapers William Barnes West and Hannah (nee Twells) in January 1824. Shortly after the birth of their only child Hannah in July 1850, Ann died of child bed or puerperal fever, aged 26.
On New Year’s Day of 1861 William married his second wife, Mary Malin of Ashleyhay, oldest daughter of George and Elizabeth (nee Annable) at the Baptist Chapel in Wirksworth. Their son William was born in the same year. William senior died in the following year, aged 40, of tubercular pneumonia.

Mary then went on to marry George Barker, son of lace manufacturer Thomas and Mary (nee Mills).
George was a small ware and shoe dealer in Bath Street who in 1872 became Registrar of  Births and Deaths after the retirement of Ilkeston doctor George Blake Norman. His annual salary was £60.
He and his ancestors were all long-term members of the Independent Church; “his family connections date back to the foundation days (of the Church)”. His wife Mary was received ‘by letter of transfer’ from the Baptist Church, Ilkeston into the Independent Church.

George was a teacher and then Superintendent of his chapel’s Sunday school and for many years served as a Deacon.
With his family he left Bath Street to live in Malin House, St Mary Street.(1885-1888) 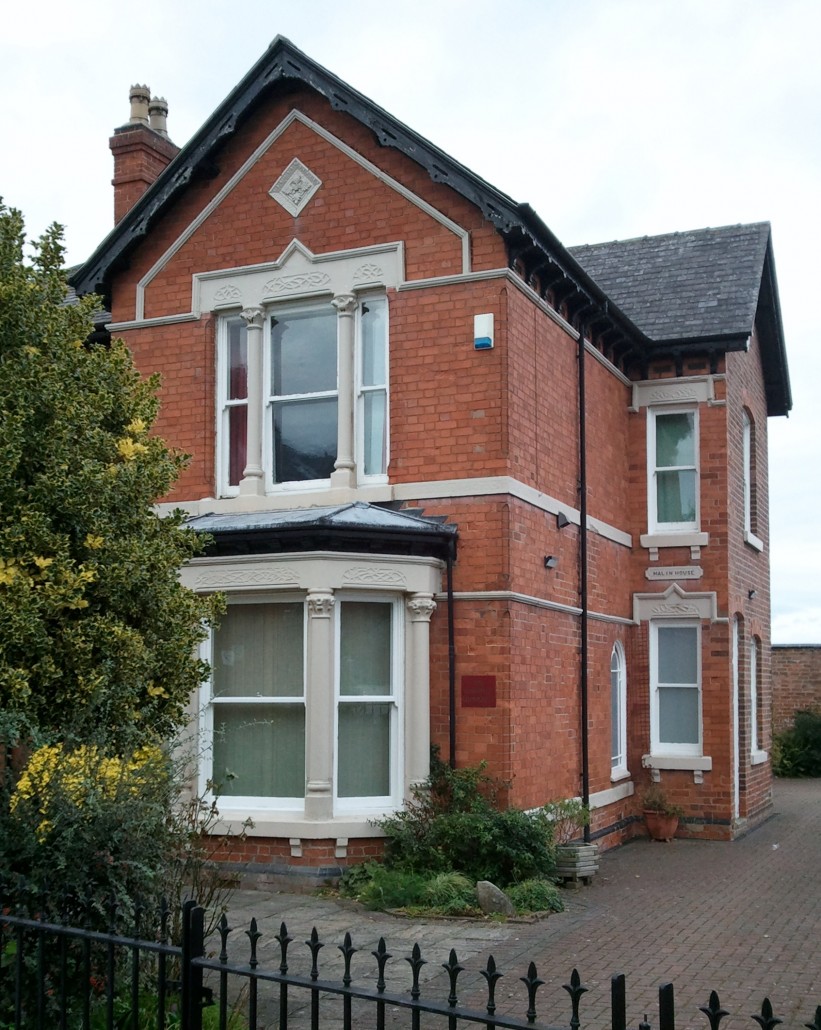 A view of Malin House 2015 … the house name can be seen between the two windows on the right.

George died at Malin House in December 1895, aged 54, and was buried in Park Cemetery.

A stained glass window to their memory was placed in the Wharncliffe Road Congregational Church by their family.

“The urn represents a funeral urn and is thought to symbolize immortality.

It is commonly believed to testify to the death of the body and the dust into which the dead body will change, while the spirit of the departed eternally rests with God.”

John and Catherine Twells had at least four other children.