The burial grounds of the old Baptist Chapel

It is the late 1870’s and as we walk northwards along South Street from the White Lion Square area to the Market Place (bottom to top in the map below) we pass Robey’s Yard on our right and then Truman’s Court. In between them is the old Baptist Chapel now used as a Sunday School after the new chapel was built in Queen Street in 1857/58. 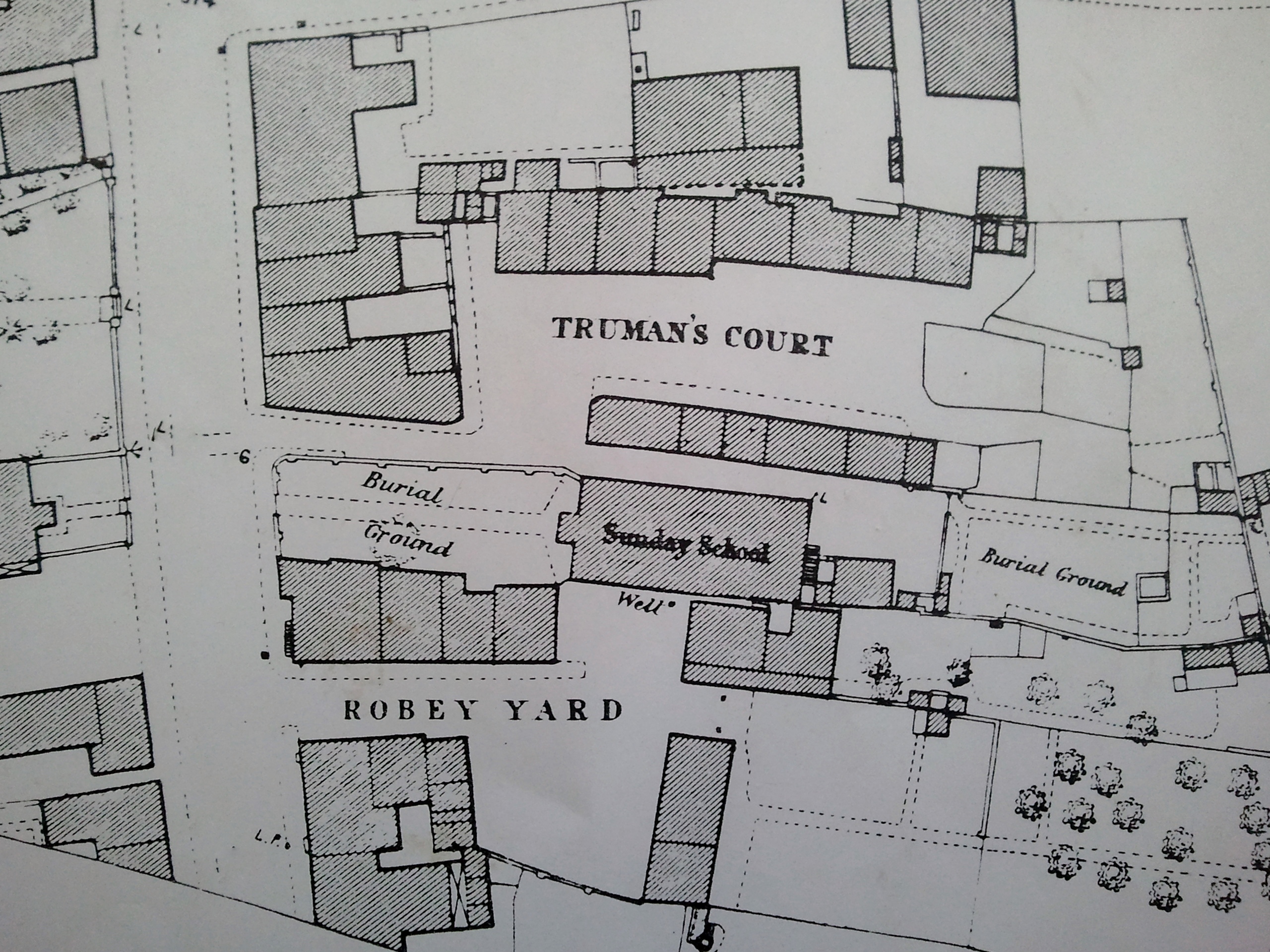 In May 1958, under the heading of “The ‘Lost’ Graveyard near the centre of the town” the Ilkeston Advertiser printed an article  about part of the Baptist Church burial ground (which can be seen on the above map)…  ‘few people even know it is there’.…

… ‘Near the centre of Ilkeston .. there is an old disused graveyard about which an astonishingly few people know, even people who have lived in Ilkeston for many years.
‘It is at the rear of the Church of the Nazarene, South Street, and is walled off and locked up. In it are buried some of the earlier Ilkeston Baptists — the Church of the Nazarene was formerly the Baptist Church — but no burials have taken place there for many years.
‘Ilkestonians are familiar, of course, with St. Mary’s Churchyard, with the old cemetery in Stanton Road, and even with the graveyard which is at the front of the Church of the Nazarene.
‘The church was built by the Baptists in 1785 and it is believed that the burial of members began there soon afterwards.
‘There is, however, no known record of the graves either at the front or the rear of the church. Many of the headstones have long since been removed from their original positions and stand against the walls.
‘The baptists moved to the present Queen Street Church in 1857, but still own the South Street chapel and the grounds adjoining.
‘Records in the possession of the church show that a century and a half ago, the Baptists buried in South Street members and their families and, in fact, anyone who ‘attended on the Word spoken’ at the chapel. The burial charge is believed to have been as little as 1s for members’.

The article then went on to describe ‘well-known local families’.

‘With the moving of the church to Queen Street, however, and the development of public cemeteries, such as the one in Stanton Road,, the graveyards at South Street fell into disuse.
‘On the headstones still decipherable, however, are the names of well-known Ilkeston families.
‘Christopher Harrison, first deacon at the chapel, is believed to be buried there, and there is also a Joseph Harrison, buried in 1794 at the age of 38. There are also Blounts buried there.
‘Another well-known Ilkeston family, the Twells, have several graves there, some at the front of the chapel, others in the portion at the back.
‘One of those at the graveyard in the rear, hidden from the public by high walls and through there being no public road near it , is that of Eliza Twells,* who was buried in 1829, and again — the bearer of a well-known name — Hannah West^, who was buried on May 2nd, 1861, aged 76.
‘Burials of members of the Twells family continued until the middle of the century — Ann  Twells,** who was buried on July 9th, 1850, at the age of 25, and another Ann Twells,*** who died on January 24th, 1847, at the age of 20.
‘Yet another well-known Ilkeston name is recalled by a stone bearing the name of Elizabeth Severn, who was buried there in 1812 at the age of 30.
‘In the old graveyard at the back of the church there is also a vault, but so weatherworn as to give no indication as to those buried in it.
‘One headstone, at the front of the church, bears the name of Ann, ‘wife of Phillip Hardcastle, an itinerant minister in the Methodist Connexion’, who died in 1814 at the age of 45, which shows that use of the graveyard was not confined to Baptists’.

*Eliza Twells was born in March 1812, the first child of colliery manager John and Catherine (nee Buckland) who had married at St. Mary’s Church in May 1811. She was aged 17 when she died in November 1829.

**Ann Twells was the sister-in-law of Eliza. She was the youngest daughter of draper and tailor William Barnes West and Hannah (nee Twells) and married Eliza’s brother William Twells in 1849. She died of ‘child bed fever’ in July 1850, 11 days after giving birth to her daughter Hannah.
William Twells later — on New Year’s Day 1861 — married Mary Malin, daughter of farmer George and Elizabeth (nee Annable) … and the family who give their name to Malin House in St Mary Street.

***Ann Twells was the youngest daughter of John and Catherine, and died in January 1847, a few months before her twentieth birthday.

Other members of the Twells family buried there include yet another Ann, second daughter of John and Catherine, who died in August 1821, aged 6, and John, their youngest child, who died in February 1830, aged 8 months.

^Hannah West was the wife of William Barnes West — married in February 1805 — and the mother of Ann (above).
She was born a Twells, in 1785, the daughter of Humphrey and Ann (nee Plowright).

Squeezed between Robey Yard and Trueman’s Court was Baptist Chapel Yard where we pause to examine the Meadows family.

And then move on to reflect upon the Baptists of Ilkeston.