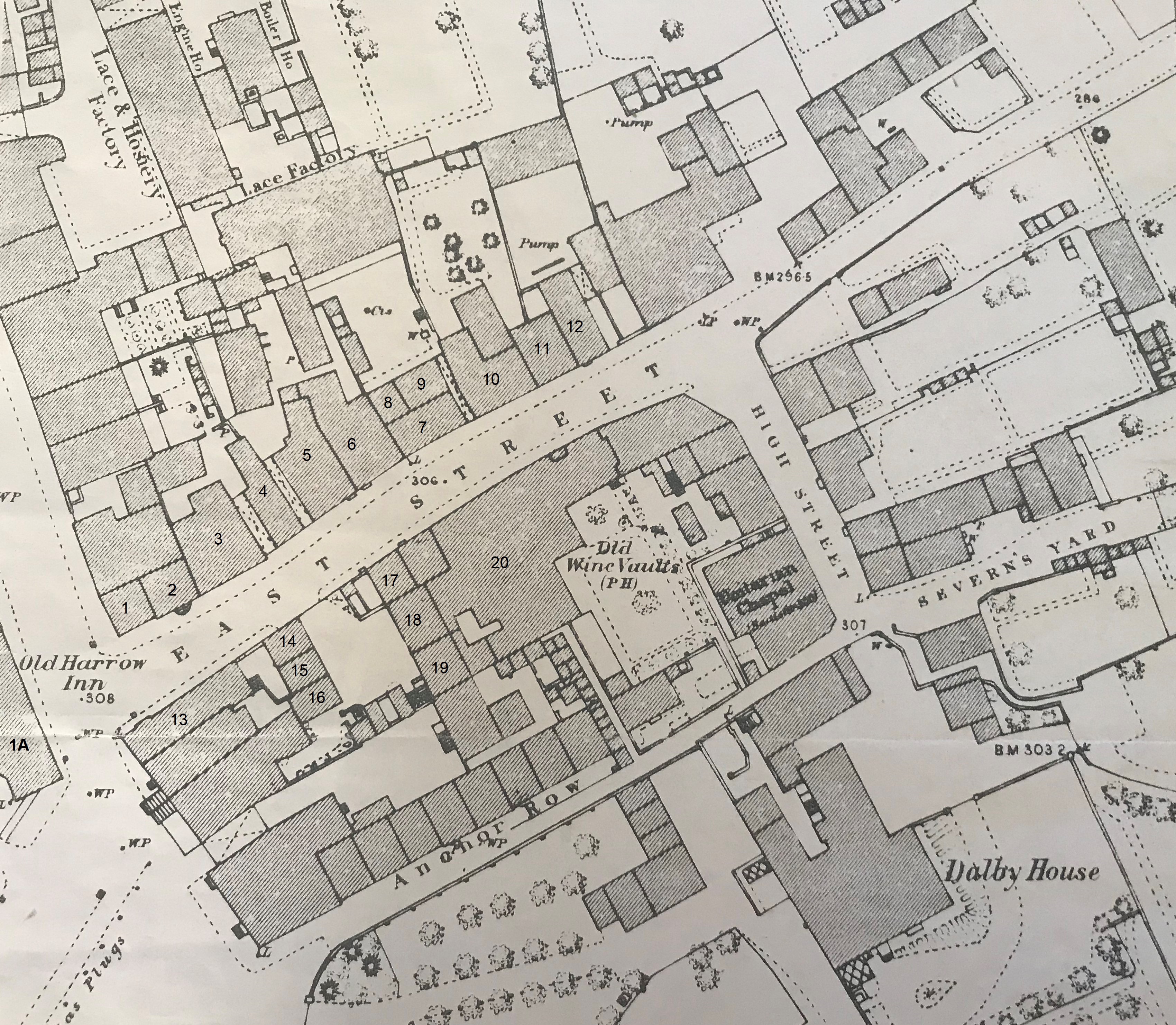 “There was no carriage road leading from Bath Street to Cossall. All such traffic went through East Street, Burr Lane, along the narrow road, over the Canal and Erewash”

This (above) is how Adeline described the route from Ilkeston to Cossall, and we can see the first part of it on the map (also above), which was produced about 1879/1880; when we compare it to the Local Board Map of 1866 there are differences and similarities in this part of Ilkeston. It was a time of structural change in the fabric of the town … buildings added, altered and renovated, destroyed and replaced, as we shall see.

The Old Harrow Inn (labelled 1A on the map) stands on Bath Street and opposite is the entrance to East Street.
At the end of the eighteenth century the main roadway through Ilkeston was called Town Street, a name in use at least into the late 1830’s. This was subsequently split into South Street and Bath Street, both these names appearing on the 1841 census. (For some obscure reason High Street was also once part of Town Street).

On the east side of this main thoroughfare was one pathway along the route of what is now East Street and Burr Lane, at the end of which it turned eastwards again, into fields, along the line of today’s Lower Chapel Street.

East Street was at one time referred to as Bull Street, possibly because the village bulls were pastured at a point along its length, perhaps at the bottom of Burr Lane. It was also referred to as Bennett’s Lane, for a reason which should soon become apparent.

It is difficult to be certain about the precise order of the following shops and houses, as Adeline separates the shops from the houses in her letters. But let’s take a walk down East Street, starting at the northern corner.

“On the North side of East Street was Mr. George Small’s shop, vegetables and flowers, with one window in East Street, the other in Bath Street, the door on the corner”.

As we have just seen George Small occupied the premises at the northern corner of East Street and Bath Street, where the Borough Arms now stands. You should be able to identify it on the map. (house 1)

“The next (shop) was really a house, up three or four large steps, which protruded on the pavement.
This was taken by Mr. Elijah Higgitt, who when out of his apprenticeship, married Miss Daykin, and started in business as a tailor and outfitter.
They had two sons. Henry followed his father, Arthur William became a schoolmaster”.

I think you can see the steps mentioned by Adeline, on the map. (house 2)

Elijah Higgitt, youngest child of Henry, coal wharf labourer, and Ann (nee Shelton), was born in 1833 in Shipley where he lived while serving as an apprentice tailor. He married Elizabeth Daykin, daughter of Kirk Hallam carpenter Richard and Ann (nee Clemerson), in 1855 and moved into Ilkeston where he seems to have spent most of his life in Bath Street, as a tailor and outfitter, and one-time hairdresser. We shall meet him again as we walk down the west side of that street.

In the later 1880’s, after the death of his first wife in May 1885, Elijah moved into Charnwood House in St. Mary Street with his second wife, Mary Ann (nee Clemerson). Just round the corner in Gregory Street were his two sons with their families; Richard Henry, his father’s assistant, at Arden Villas, and Arthur William, elementary schoolmaster, at Florence Villas.

Elijah had married Mary Ann in 1887, she being the cousin of his first wife. Thus the aunt of Elijah’s first wife became his mother-in-law.

“Next was Mrs. Sam Lowe’s grocer’s shop. When Mrs. Lowe bought the land in South Street and built a house and shop on it, she removed from East Street,”

Samuel Lowe was the eldest child of Joseph, labourer, and Mary (nee Hesketh) and was born in Cossall in 1822.
He married Mary Beardsley, eldest child of grocer and draper John and Catherine (nee Skevington) of London House, Bath Street, in 1847 and set up as a grocer, initially in East Street, before moving to South Street in the late 1850’s.

We leave them here to meet up later as we walk along the west side of South Street.

“and Mr. John Wilson, shoemaker, took the East Street shop. This was the last of the shops in East Street”.

John Wilson and his wife Fanny (nee Clifton) moved to Ilkeston after their marriage at Greasley in December 1845.

Adeline makes a slight mistake when she writes that ….. on the North Side was a house occupied by Mr. William Osbourne, engine driver at Carrier’s.

Blidworth-born ironworks labourer John Osbourne or Osborne married Maria Horsley, daughter of James and Charlotte (nee Severn) in 1840. The family came from Riddings to Ilkeston about 1852. In December of that year daughter Lucy was born in the town, when John was described as ‘a dyer’. (Lucy will later ‘reappear’ in Bath Street).

The Derby Mercury of 1859 described John as a night watchman at the Carrier’s works, when he was the victim of a violent assault by two drunken ‘visitors’ from Heanor.

The family can be found at White’s Yard in Bath Street in 1861 where John was still a dyer and scourer. 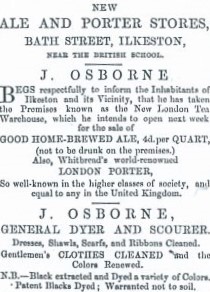 By 1865 the family was at 3 East Street and on the 1871 census John was described as ‘engine driver at works’.

Then Wright’s Directory of 1874  lists him once more as a dyer of 3 East Street.

He died in East Street in February 1880, aged 61, when he was described as ‘an engine worker’.

In the following year Kelly’s Directory records Mrs. Maria Osborne, dyer of 3 East Street, and she was there until her death in 1886.

John Wilson and John Osborne would be accommodated in the next two houses, the latter one with entries/alleyways either side of it. This would then bring us to the two rather large houses, joined together.

Neighbours of the Osbornes were members of the Rose family who had moved into No 1 East Street by 1871. Stephen Rose had been a coal miner when on September 23rd 1851 he married Mary Aldred, eldest child of Samueland Lucy of White’s Yard off Bath Street. The Rose family then continued to live in the Yard but eventually moved into East Street where they kept a grocer’s shop. Stephen died there — March 26th 1883 — and Mary took charge thereafter. When Maria Osborne died in 1886 it looks like Mary Rose moved up a couple of doors and into Number 3.

At about eight o’clock in the morning of April 7th 1887 a fire broke out in the chimney of Rose’s shop and spread very quickly, because of the nature of the cottage and a strong wind. By that time it was very old, still with a thatched roof, and the timbers and thatch being very dry. A hose belonging to the Local Board was quickly attached to a hydrant to fight the fire, though by then, too late to save the roof. The engine of the fire brigade arrived later to quickly get the fire under control.
As you can see in the map at the top, the shop cottage was in a block belonging to Messrs Shipstone, brewers of Basford, and was destined to be pulled down — so you might argue that the fire had prematurely started the process ?

One of these was the Columbine house where Adeline was born.