We walk up Bath Street towards the Market Place and away from Fritchley’s farm …. to find that Adeline introduces us to more shops.

“The next three shops were on the Carrier property against the factory entrance. In those days shops were not always occupied, and these shops were empty for some years.”

In October 1857 they were described as “recently built or in the process of construction” by the brothers Samuel and Henry Carrier, plus outbuildings, and built on the sites of an old cottage and workshop. (see Plan 4) In 1871 they were numbered as 110-112 Bath Street. 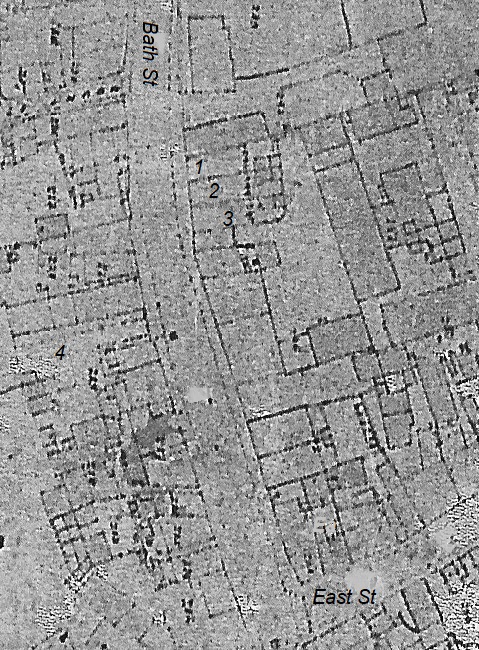 I’m afraid the above map is the best I can do, adapted from the Local Board Map of 1866. I have numbered the three shops, after which (south) is the entrance alley to the Carrier factory, followed by the premises of Joseph Carrier. On the opposite side of Bath Street (to help get your bearings) you can see Mount Street at the top of the map, poorly marked (upside down) … can you ?
Number 4 is White’s Yard, off Bath Street. 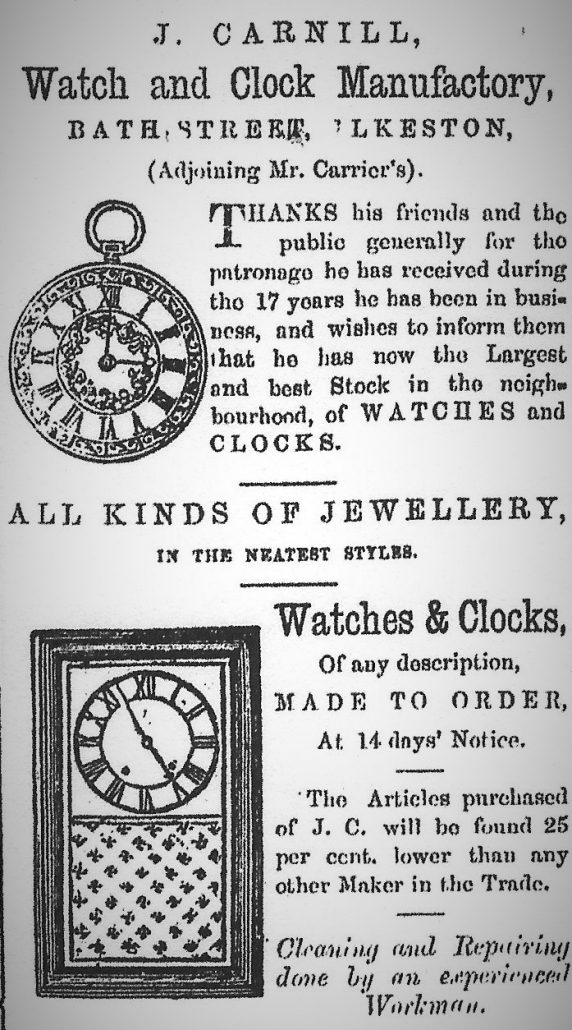 At the beginning of 1858 lacemaker and watch and clock maker Joseph took over the shop recently occupied by Edwin Wragg, close by the Pioneer offices and next door to the shop of Joseph Carrier in Bath Street — Edwin Wragg had moved into the Market Place. 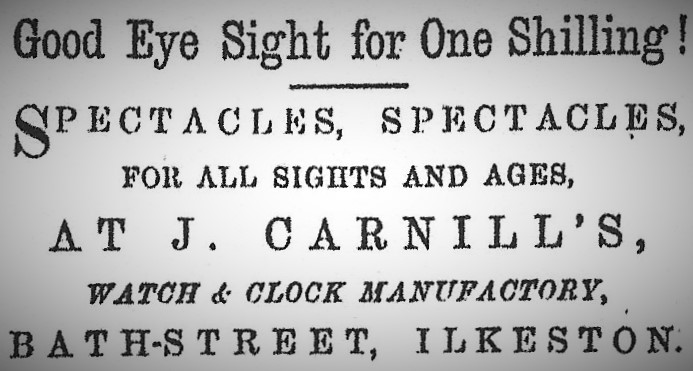 The family moved to Basford in the mid-1870’s where Joseph continued to trade.

About 1875 housepainter and decorator Charles York and his family moved from South Street to occupy number 110 Bath Street. This was opposite Number 8A Bath Street – home to the Sun Tea Company in 1878. 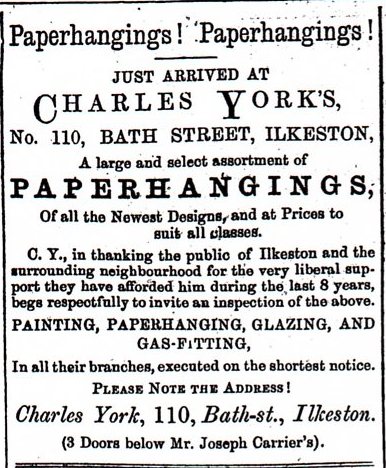 From the Ilkeston Pioneer November 18th 1875.

Almost two years after the death of his father (December 12th 1863), Samuel Shaw married Mary Ann Boam (September 12th 1865).
She was the oldest daughter of Henry and Ellen (nee Chambers) — born in Shipley, Derbyshire, her father was a stockinger, later a coal agent and then a coal contractor/merchant, trading in Derby where he was eventually appointed Mayor of that city (1895).

Just over a year after his marriage Samuel was an unsuccessful and bankrupt shoemaker. He owed money to draper Joseph Carrier for rent on this shop property, to Thomas Barker for rent on a recently-vacated workshop property in Lees Yard, and to George Tooth for raw materials. There were several other debts owed to out-of-town tradesmen. In total he was over £163 ‘out of pocket’. Included in this was the sum of about £13 owed to his father-in-law .. and it was with Henry Boam that Samuel now went to live, leaving behind his Bath Street home and shop. 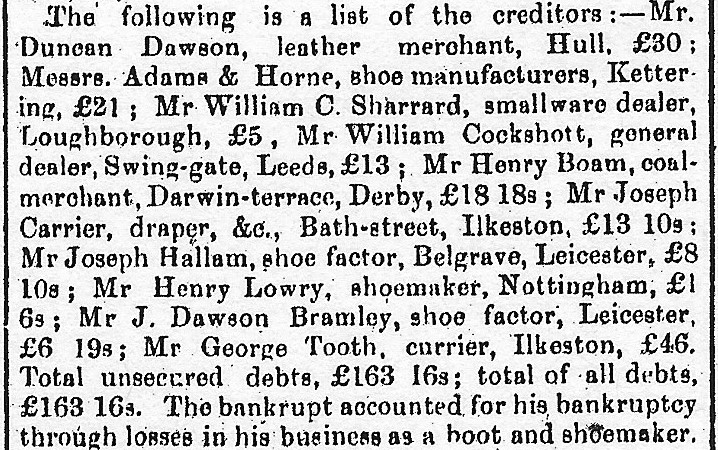 In the week before his confirmed bankruptcy at the end of November 1866, it was alleged that Samuel had removed several items of furniture and belongings from his home, in an effort to take them out of the reach of his creditors. In this unlawful subterfuge the shoemaker had been aided by father-in-law Henry Boam and landlord Joseph Carrier … who both, as creditors, had a vested interest in this enterprise. A sofa, a set of drawers, a stitching machine and a hamper filled with smaller items belonging to Samuel were found on Joseph’s property, next door to Samuel’s shop. The furniture had been bought by Joseph while the stitching machine was being held as security by Henry against loan to Samuel — at least that is what the’ abductors’ were claiming !!
This argument was not accepted however, and the items were seized and sold by an officer of the bankruptcy court.

After Samuel’s departure, and on the 1871 census the shop was occupied by John Wilson, another shoemaker. We shall meet John later as we walk around the corner into East Street.

Later the shop was taken over by baker James Aldred junior, the son of lacemaker James and Eliza (nee Thompson). James junior was there on the 1881 census; he was there when he was married on February 10th, 1884, to Mary Eliza Stanley; he was there to see his daughter Annie Beatrice born at the shop on Decmeber 5th, 1885; and he was there when second daughter Mary Eliza was born on September 19th, 1887, by which time the shop had been renumbered as 18. In the following year the family left for 27 Wood Street. James junior was to live there until his death in 1902.

As the Aldred family moved out of Bath Street, George Adams, seedsman and florist, moved in with his wife Lucy (nee Osborne), whom he had recently married at York — on February 24th 1887. She was a member of the Osborne family of East Street, had left the town to work in service and had taken a circuitous route to return to Ilkeston as a married woman.

George and Lucy were still trading there at the close of the Victorian Age.

This was at number 112 Bath Street (and about 1887 renumbered as 16) but, according to Adeline, “it had a succession of tenants” …. perhaps one being George Youngman (note the address and location in the first advert) 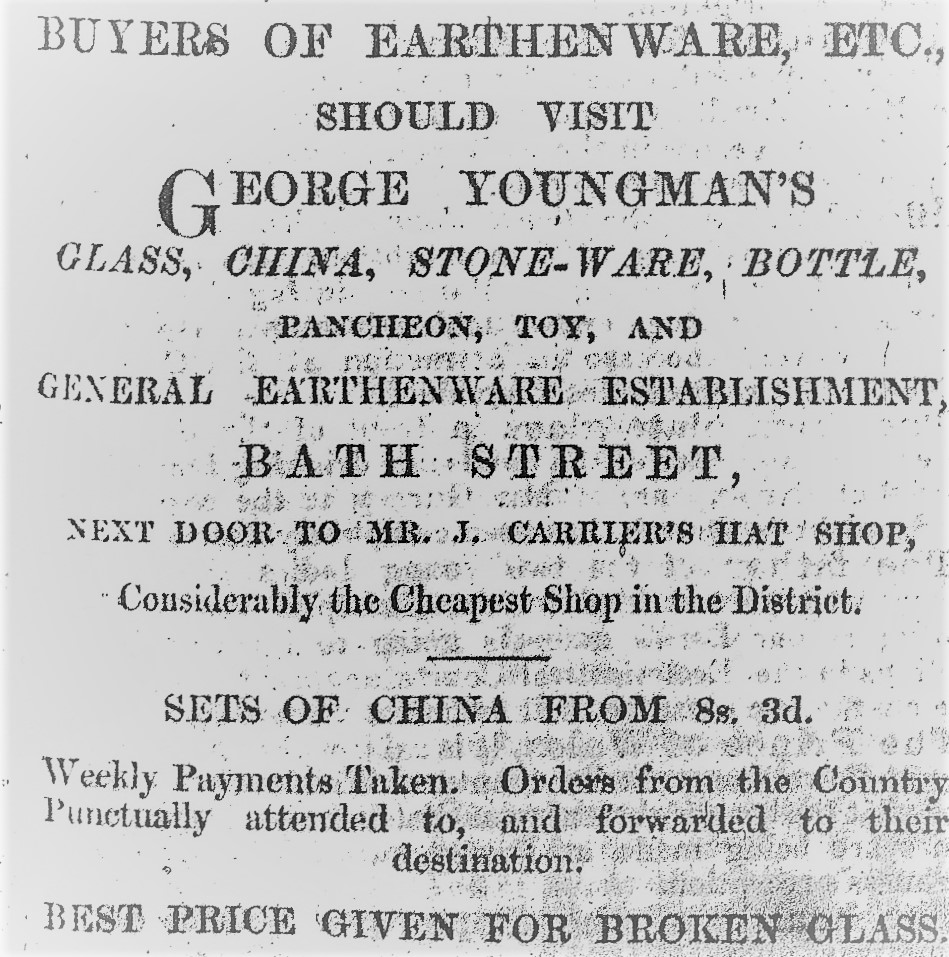 both adverts appear in the Ilkeston Leader of June 29th 1861

George came to Ilkeston with his family about 1855 and died there on Christmas Day of 1866.

On the 1871 census it is occupied by widow Eliza Hallam, grocer and baker, and her family. She had been born Eliza Adams of Heage, about 1836, and had two illegitimate sons before she married Joseph Hallam on August 25th 1861. Joseph worked for a time with Bath Street baker Solomon Beardsley but died, September 18th 1867.

On Christmas day of the following year Eliza’s business and that of another Bath Street grocer, Amos Trueman, were merged when the two married.
Amos was a son of John and Sarah (nee Skevington) and had been a widower for just over a year, after the death of his first wife, Martha (nee Bostock), the daughter of collier Robert and Mary (nee Wright).

In the latter part of the century Amos and Eliza were trading at 182 and 183 Bath Street and it was there that they both died, Amos in February 1893 and Eliza in December 1903.
Amos was buried with his first wife in the extension graveyard of St. Mary’s Church.

By 1881 the Allcock sisters had moved up Bath Street, from 102 to this shop, where Maria continued to trade as a milliner. She seems to have ‘retired’ in the early 1890s.

And below is the line of three shops on the 1879/1880 map, the entrance to the Carrier factories just to the south of number 112. 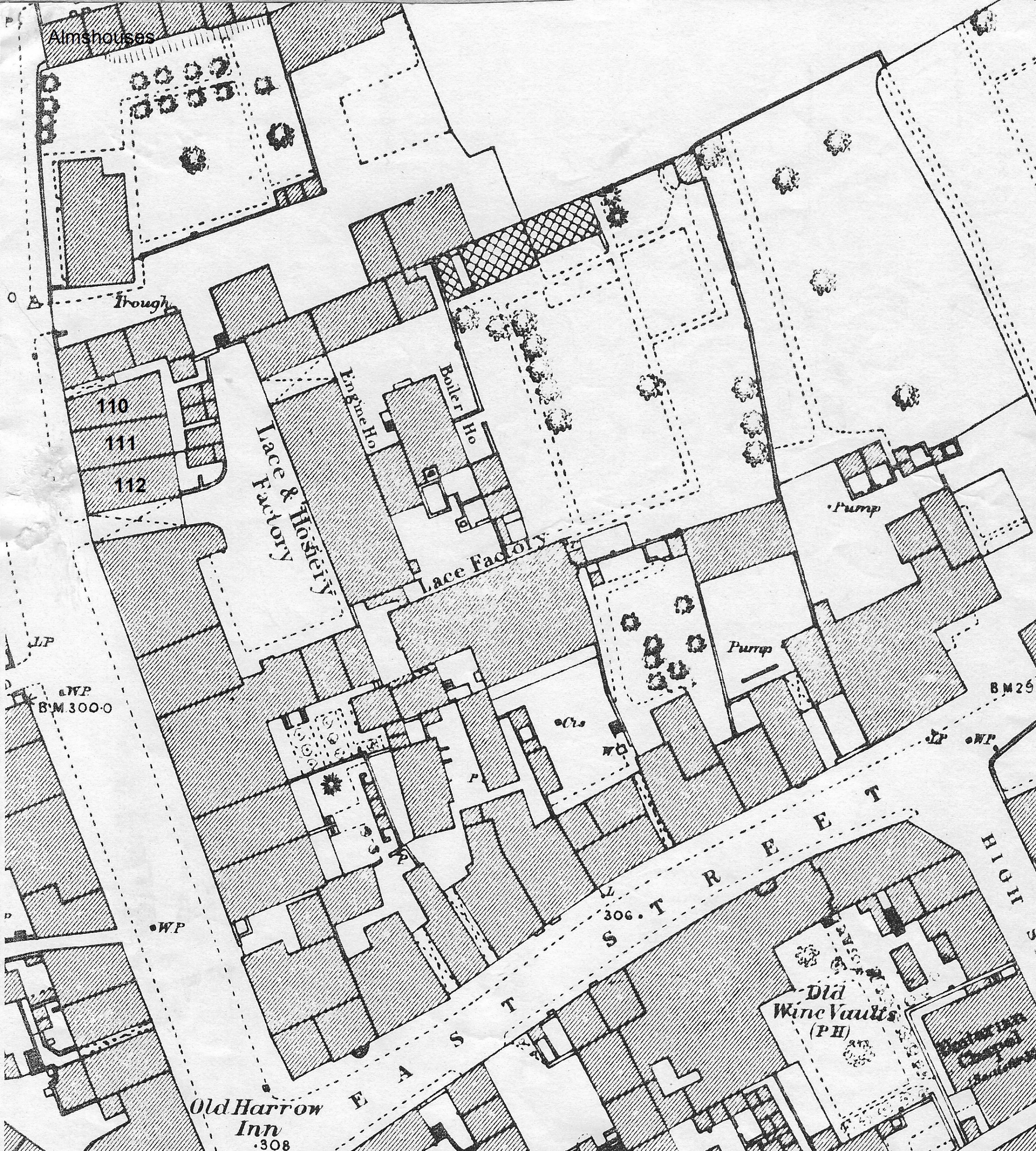 And we can now enter the factory yard of  Henry Carrier and Sons.