Act 1, Epilogue: From Board to Borough 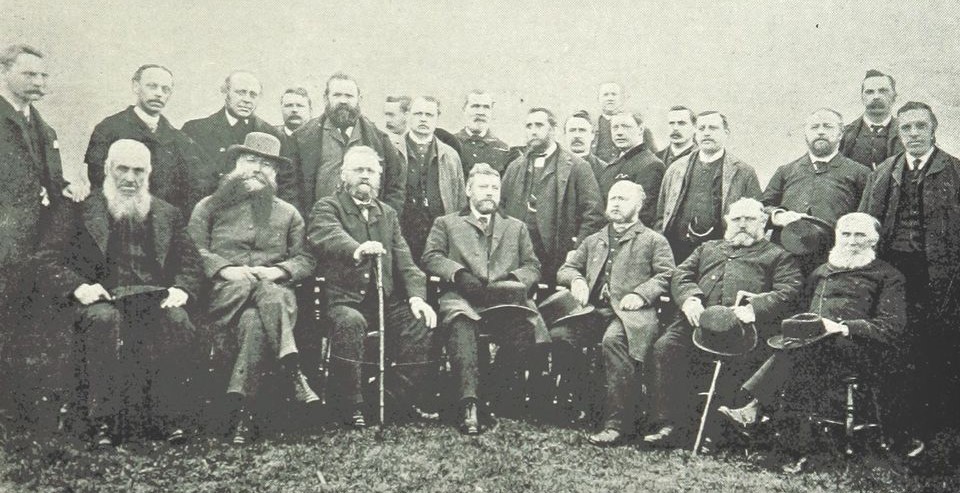 At the beginning of October, 1885, the question of applying for a Charter of Incorporation for the town was brought up by the clerk to the Local Board, Wright Lissett. Because there was a possibility of expense, it was decided that the ratepayers of Ilkeston needed to be consulted. When in doubt, circulate a petition — which was what was decided.

On January 18th, 1886, following a unanimous resolution by the Local Board, its chairman Francis Sudbury convened a public meeting of the town’s householders at the Town Hall “for the purpose of considering the provisions of the Municipal Corporation Act 1882 as compared with those of the Public Health Act 1875, and deciding whether it is desirable to petition the Queen for a charter of incorporation”.
He prefaced the proceedings of the meeting with the observation that the members of the Board were not there as ‘special pleaders’. Who was he trying to fool?
Wright Lissett, clerk to the Local Board, then set out to a rather sparse audience of town ratepayers the differences in the provisions of the two Acts.
The 1882 Act demanded a more regular and systematic election of representatives, with no person being nominated who had not been consulted. The same act introduced a ‘fairer’ system of voting; “all ratepayers stood on the same level. No person could vote as an owner as well as an occupier; but all persons whose names appeared on the burgess list had one vote – whether man or woman”. The Clerk also explained differences in the auditing of accounts, and in the position, power and privileges of Board members compared with those of a Corporation.
And none of the existing Board’s powers would be lost but new ones would be gained.
A Town Council would be no more expensive than the present Local Board. However the costs of incorporation would depend upon how much opposition there was and how organised it was. No part of any adjoining parish would be asked to be included in the charter so that he could foresee no ‘outside opposition’. Perfect unanimity would incur trifling expense. Ilkeston was now a large and growing town, the most important place in the Erewash Valley, the centre of its own Parliamentary district to which it gave its name, and incorporation would enhance its position in the commercial and financial world. Successful businessmen would be encouraged to remain in the town and not seek greater success elsewhere as was now the case. They would give ‘higher tone’ to the town and others might thus be drawn in. This would produce a multiplier effect of an improved and better class of housing, more work for builders, labourers, artisans, females, more manufacturers would be sucked in, property values and rates income would increase, more gas and water would be used, shops would grow in size to compete with those in Derby and Nottingham, population would grow, and the process would then regenerate itself. (Applause.)

And what were the chances of the Privy Council granting a charter?
In size Ilkeston was the second town in Derbyshire with excellent railway accommodation, numerous factories, collieries and other works, and the Local Board owned the gasworks, waterworks and its town offices. All points which should weigh well with the Privy Council.

With just two dissentients, (Urius Griffiths being one of them), the motion was carried by the meeting.

Charles Dickens said he “awoke one morning to find himself  famous”, but what could the feeling of that literary genius have been compared with those of pride,honour and fame, that will agitate the breast of the gentleman, whoever and wherever he is, who will some day in the near future, awake to a glorious knowledge of the fact that he is “Mayor of Ilkeston”. (Derbyshire Times and Chesterfield Herald; Jan 30th 1886)

The petition to consult Ilkeston’s ratepayers was got up and circulated around the town. By the end of March it had 1500 signatures attached to it. It was then presented to ‘her Majesty in Council’ to be considered by a committee of the Lords of the Privy Council.

However before a decision had been made by the Council, there was a last election for the Local Board. As usual six members had ‘retired’leading to this election in early April … Francis Sudbury, Edmund Tatham, Frederick Beardsley, Charles Haslam, Charles Maltby and Samuel Robinson were elected.

On June 30th 1886 a public inquiry on the proposal of Incorporation washeld at the Town Hall — the proposal being opposed by the Stanton Ironworks Company, an opposition which was immediately withdrawn at the beginning of the meeting. After this, Wright Lissett, clerk to the Local Board, set out the case for incorporation which included a list of the recent achievements of the Board and little else. The inquiry then concluded.

On July 17th 1886 the Local Board heard that its petition had been successful. There was to be a Town Council of six Aldermen and 18 Councillors, The town was to be divided into three wards — North, Central and South — and the first elections were scheduled for next November.

By the end of 1886, the Local Board was still waiting for the Charter of Incorporation to reach the town. It was now expected by the end of January 1887 but arrived a couple of weeks early. In mid February there was a public reading of the charter in the Market Place, with associated pageantry, illuminations and decorations.

The townspeople had felt it necessary to celebrate the momentous event. Lace and hosiery factories closed, shops were decorated, schoolchildren had an extra holiday, and bunting, flags and evergreens were everywhere. And it was an excuse for a very big drink. Outside the Town Hall a temporary platform, draped in blue and red stripes, afforded the Local Board members and invited dignitaries a prime view of festivities while the other sides of the Market Place provided a place for the brass bands.
Afternoon came and as the bells of St. Mary’s Church rang out Ilkeston Prize Band led into the square the first group of what was to grow to an audience of several hundred children, each wearing a medal (donated courtesy of F.W. Goddard & Sons and bearing the inscription ‘Ilkeston Incorporated, February 15th, 1887’.) and many carrying banners and small flags.

Eventually it seemed that every part of the Market Place was filled with what was estimated to be a crowd of 14,000 persons.
Songs were sung, hymns played, prayers prayed, speeches made, flags waved, Queen saved and cheers raised.
Every child left with an orange and a bun (the latter made by Solomon Beardsley, baker of Bath Street) and after dark the streets were thronged with meandering inhabitants taking in the illuminations.
The Derbyshire Times and Chesterfield Herald observed that ‘several very excellent photographs of the proceedings were taken by a Chesterfield artist’, photographer Alfred Seaman, who is shortly to open a studio in Ilkeston. The same newspaper proudly boasted that “Mr. Seaman was the only photographer who was successful in obtaining good negatives, and his photographs are therefore unique”. 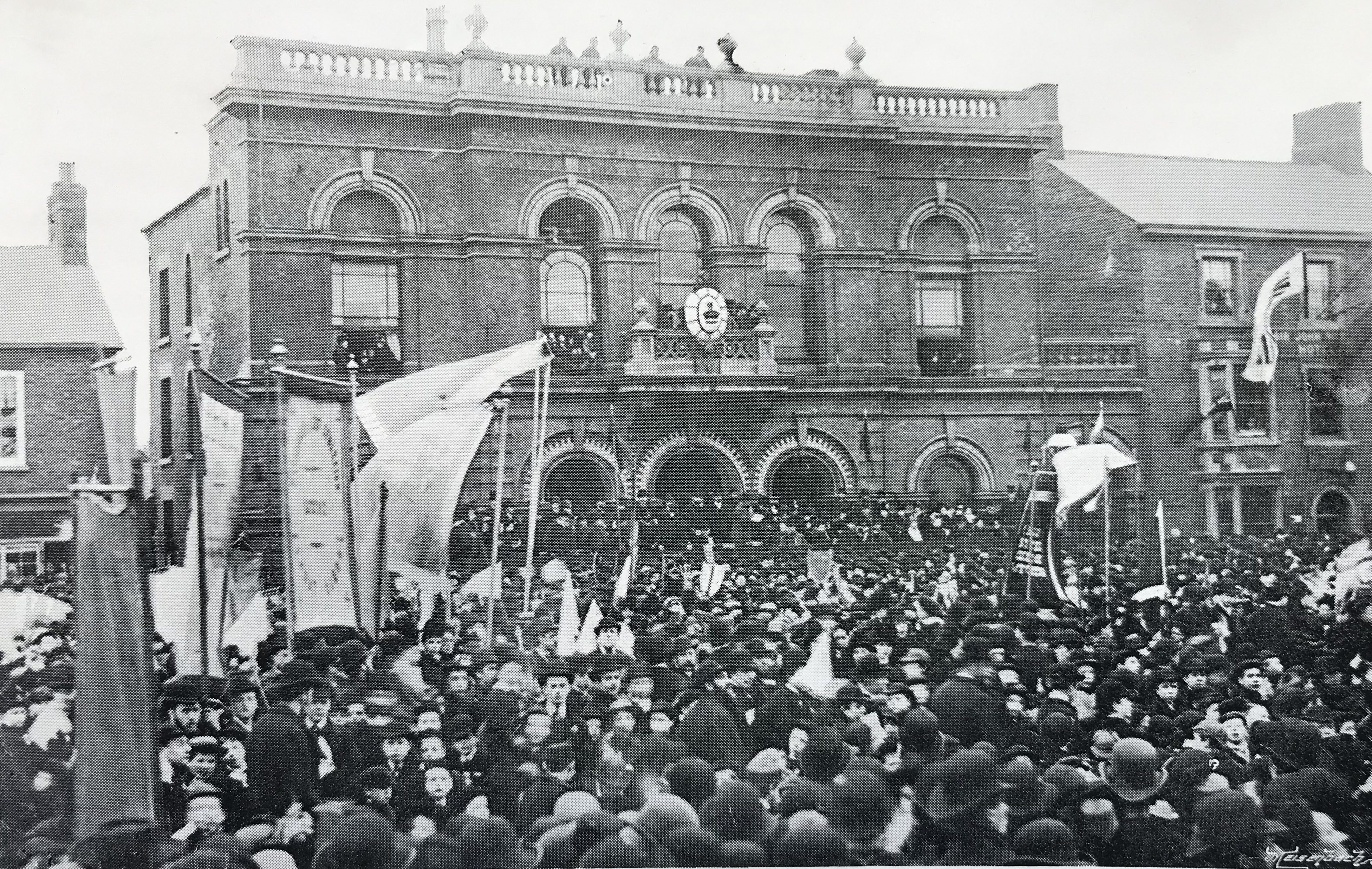 “Mr. Francis Sudbury, the first Mayor-elect briefly addressed the crowd from a platform in front of the Town Hall. Then followed the reading of the Charter which confers upon Ilkestonians for all time the rights and privileges of municipal government “. (Trueman and Marston)

Commenting on the prospects for the town in its editorial section the Nottinghamshire Guardian …..
“From an architectural point of view (Ilkeston) is not, unfortunately, a delightful place and the aesthetic surroundings of the town leave much to be desired. But under the new Corporation all these will, no doubt, in process of time be improved and Ilkeston may even yet take its place amongst the handsomest and best regulated boroughs in the United Kingdom…… Under a Local Board the ratepayers have not the same control over their own affairs, nor such good opportunities of developing the local resources and improving the place”.

Thus, farewell to the Local Board as it passed into history.
R.I.P.
Formed at a time of parochial division and discord it ended its days in an atmosphere of happy harmony and hope. 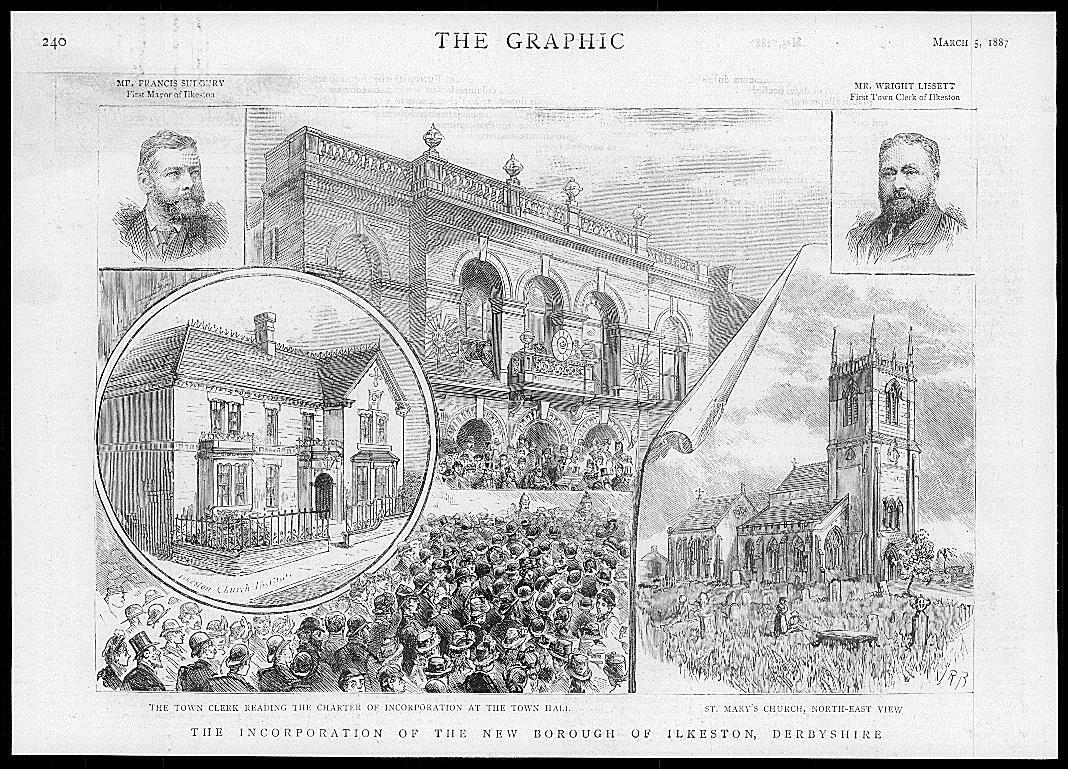 “Ilkeston of today, with 33,000 inhabitants, its up-to-date churches and chapels, its spacious schools, a Town Hall with a Mayor*, Aldermen, Councillors and officials, its excellent drainage system, and pure water supply. Motor cars and buses, speeding through the streets, well-lighted thoroughfares and brilliantly lit shops.
“All this is very different from the Ilkeston of the early fifties of last century.”

May 2nd 1887 was the date when elections for the first Town Council took place. The new borough was divided into three wards — North, South and Central — each with the power to send to the Council three elected representatives. The Council would then elect six Aldermen.
Mentioned at the top of this page, Francis Sudbury was Ilkeston’s first mayor. Some Nottingham wit had previously asked if the string of pork sausages hanging in the Market Place shop window of his nephew (and butcher) Arthur William, was the Mayor’s new chain of office.
On May 12th, after being introduced to the Bench at the first Ilkeston Petty Sessions since his election, he was sworn in and took his seat on that Bench.
This was especially pleasing to two old offenders Frederick Brown and John Daykin, who then appeared before the newly installed magistrate … charged with ‘drunk and riotous behaviour’ and ‘sleeping out’ (respectively). As ‘an act of clemency’ both prisoners were discharged.

And in the following month, another act of generosity by Francis ….
“The Mayoral chain which (Francis) Sudbury has presented to the town of Ilkeston is a beautiful specimen of the jewellers’ art, and was entrusted to Mr. John J Perry, of Angel-row, Nottingham, to procure.
“The chain, which is of 14 carat gold, is a succession of Roman shields linked together, each shield being surmounted with a coronet. On the large centre link, to which the badge is attached, is a richly-enamelled monogram of the donor, ‘F.S.’ On each side of  the link is a beautiful raised cross-bar in front of a civic mace, each one being surmounted with a Royal crown. Hanging from the centre link is the badge. This is the most striking portion of the whole piece, and consists principally of 18 carat gold, on which is enamelled the Town Arms.
“Although the maker was confined to the somewhat sombre colours supplied by the Heralds Office, they form a striking contrast.
“Around the shield is a piece of raised gold work, composed of laurel and oak leaves, and on the bottom in bright enamel the motto ‘Labor Omnia vincit’. On the reverse side of the badge is the following inscription:– ‘Presented to the borough of Ilkeston by Francis Sudbury, first mayor, 1887, Jubilee Year of her Majesty Queen Victoria’.
“The gift has cost £300”. (NEP June 1887) 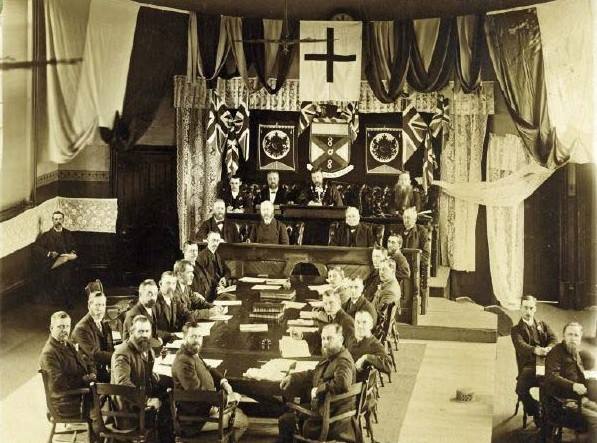 (Onwards, upwards and round the corner)