To enhance the experience of a visit to the Baths, the latter were adjoined by Vauxhall Gardens — park grounds which included a bowling green, archery ground and attractive walks, and where the public could, at times, enjoy “firework displays, monster Montgolfier balloon ascents, grand revolving wheels, dancing on the green and excellent bands”.
These gardens lay between the Baths and the Rutland Arms Hotel.

The last inn on the west side was the Rutland Arms. To about 1844 this was a small countrified public house.
The Rutland Arms Hotel, as it was now called, had for its landlord Mr. Thomas Hives. 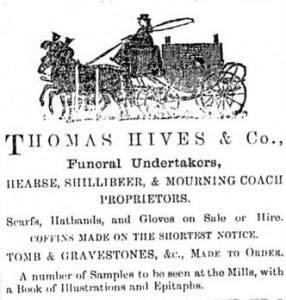 In trade directories from the mid-1860’s the businesses of Thomas were being described as ... “Wood and stone steam saw mills, English and Foreign timber and stone merchant, stone carver, and engraver of monuments, tombs, gravestones, tablets, &c., carriage builder, and of the Rutland Arms Railway, family, and commercial hotel, hot, cold, shower and steam baths. Bowling Green and archery grounds, and billiard-room proprietor”. On Friday November 17th 1876 Thomas went out visiting his woodyard business -- Erewash Valley Wood and Steam Saw Mills -- and returned home about 4pm. He sat down in his breakfast room and died shortly thereafter. He had been suffering from gout for some time and was aged 68. The Ilkeston Pioneer recorded this memorial, written by a brother Oddfellow; “Mr Hives was one of the most generous hearted men in the town; he was respected by all who knew him; a man who befriended many a person in the hour of need, found many a poor man a day’s work, gave many a meal to a reduced brother, and assisted liberally the various religious bodies in the town and vicinity. "He was a good master, a kind father, and an affectionate husband. "He had been treasurer of the Ilkeston United Order of Oddfellows ever since the establishment of the Order, and assisted in all its departments. "As a landlord and innkeeper his conduct is worthy of praise. He would not allow quarrelling or blasphemy in his house, nor would he wait on parties who showed symptoms of intoxication”. Local poet William Campbell also contributed a poem to the ‘sad departed’. The Rutland Lodge of Oddfellows was established in April 1828 (DM) Almost two years after the death of Thomas, the Lodge celebrated its jubilee in July 1878 at the Sir John Warren Inn. The bright and clear morning of the celebration saw a procession of 150 members, some on horseback, around the streets of the town, accompanied by Ilkeston Brass Band. A wagon at the rear, decorated with flags and evergreens, carried the old and infirm members. A service at the parish church was followed by a hearty dinner, after which a short meeting was chaired by Past Provincial Grand Master (PPGM) and Market Place trader John Childs, one of the first members elected in the Ilkeston district. Brother Robert Wood, surgeon of the Market Place, was vice-chair and Brother Edwin Trueman made a short speech. At that time the Lodge had 357 members. The family of Thomas Hives. Thomas’s first wife died leaving him with two daughters. Thomas married Judith Beardsley in March 1834. Their eldest child was Elizabeth Beardsley Hives, who was born in 1836 and who died from encephalitis in November 1848. Daughters Ann (1838) and Ellen the first (1840) both died in childhood. Two further daughters were born – Ellen the second (1842) and Mary Ann (November 1846) -- before Judith died in July 1847, aged 42. Ellen, the eldest, married Henry MacDonald, grandson of Henry Carrier, founder of H. Carrier & Sons. Daughter Ellen the second married Henry MacDonald, son of John and Ann (nee Carrier) in April 1860. About 1865 and after the birth of two daughters –Annie Florence ‘Flora’ in 1861 and Frances Ellen in 1863 – the MacDonald family left Nottingham for the United States, eventually to settle in Pennsylvania. In 1873 this article appeared in the Pottsville Daily Mining Journal. – Pottsville being a Pennsylvanian coal mining town.              [message_box title="PARTING TOKEN OF RESPECT" color="yellow"]              “Harry McDonald, Esq., a worthy citizen of this borough, being about to depart with his family to England, the members of Lincoln Grove, No. 17, U.A.O. of Druids, resolved on presenting him with a handsome P.A. regalia, as a memento or token of their respect and appreciation of his established good character, for his integrity and social qualities, and for his devotion and fidelity to the principles of Druidism. “ It was also resolved as follows: ‘That the members of the Lincoln Grove, No. 47, deeply regret the departure from amongst us of our worthy P.A. Harry McDonald; but the separation or departure from his adopted country being for his pecuniary benefit, we feel resigned to circumstances, and wish for him and his family a safe, pleasant and agreeable voyage over the sea. May they ever be, in their voyage through life, united, prosperous and happy’. “It was further resolved ‘That a copy of these proceedings, certified with the seal of Lincoln Grove, No. 47, be given to brother P.A.  Harry McDonald’. “At a meeting of several members of Lincoln Grove, No. 17, U.A. Druids, organised at 9 o’clock p.m. on Saturday last, one of the members, appointed to that duty, in a short and neat speech presented Harry McDonald with the regalia before mentioned. Mr. McDonald responded in a speech of some length. All the other members spoke feelingly on the subject, and with a stave or two of ‘Auld Lang Syne’ the meeting was closed”.

Following this, on October 23rd 1873, Thomas Hives received a telegram at the Rutland Arms telling him of news that he had been eagerly anticipating for a week or more…
“Liverpool. Thursday. October 23rd 1873. Red Star Line Office. Arrived all safe. Will be home tomorrow night. HARRY McDONALD”.

Apparently this news caused quite a stir in the town and a steady stream of visitors arrived at the Rutland Hotel anxious to confirm the arrival.
The next day, Friday, preparations were made to greet the returning MacDonalds. A flag was unfurled on St. Mary’s tower where the church bells issued ‘merry peals’.
In one of his own carriages Thomas and his youngest daughter Mary Ann went to Trent station to meet the returning MacDonald family and all then travelled to Ilkeston via Long Eaton, Stapleford and Trowell.
Along the route and as night fell, old friends and acquaintances with torches and lamps were arranged to greet them.
And as they came into town the church bells once more burst into life as more spectators lined the crowded streets to catch a glimpse.
Also crowded was the Rutland Arms, with friends waiting to welcome Harry and Ellen and their daughters.
On the following evening the main ‘welcome-home’ gathering was held at the same venue when the Ilkeston Brass Band, led by Samuel Aldred, honoured the occasion.
“The evening was very comfortably spent by all present”. (IP)

Shortly after his return — by June 1874 — Henry had become one of the four trustees of the newly-established Erewash Valley Working Men’s Land and Building Society and was voted in as Chairman at the shareholder’s meeting held in that month at the Rutland Arms.
Shares in the Society were limited to 600, members paid 1s 3d per week in subscriptions, and its aim was to help them build or purchase their own home.
And four months later Henry was marching from that hotel, accompanied by the other members of the Society and headed by the Ilkeston Band, to Crichley Street where he formally laid the foundation stone of the first house to be erected by the Society. It was to be the home of coalminer William Rollinson and his family — according to the Pioneer — although the Telegraph thought collier William Wheatley was to be the occupant.

Born in November 1846 Mary Ann was the youngest child and for many years she was ‘at home’.

At the Christmas concert of 1874, held at the United Methodist Chapel in South Street, the choir was ably accompanied by Mary Ann, ‘for whose services the choir must be greatly indebted’.
Similarly, she very ably presided at the pianoforte for the Ilkeston Brass Band Annual Concert in March 1879.
And in the same month she was fulfilling the same role at a concert given by the Trinity School scholars.

Ten years after the death of her father, in November 1886 and aged 40, she married civil engineer John Hardman.

After her husband’s death in 1876 Mary took over the hotel’s licence for a short time before it was transferred to Henry MacDonald in May 1877.
However Mary continued to live there as proprietor.
In 1884 she retired from the Rutland Hotel.
The Marquis of Granby Lodge No 1 of the Ilkeston and Erewash Valley Order of Oddfellows presented her with a leaving gift at the Shipley Boat Inn.
For over 50 years the Lodge had held its meetings at the Rutland Hotel and Mary had served as its treasurer.

Shortly after this — in April 1884 — she married Draycott market gardener William Baker who was Mary’s brother-in-law before he became her husband.
He had married Elizabeth Gelsthorpe, Mary’s sister, in 1847 and she had died in 1882.

Mary died at Nottingham in January 1895, by then a widow for the second time and aged 75.