After the Merry emporium, “Mrs. John Childs had the next shop  for millinery, costumes, etc. Mr. John Childs was a china dealer and he had the prison attached to the old Butter Market. The inner cell he used as a store.
When the weather was fine, Mr. Childs arranged his china outside the prison, had a chair against the door, and here he sat waiting for his customers.

The shop was 10 Market Place in 1871 and 1881. The Butter Market was across the Market Place, by the Church wall, where the public toilet block now stands.

John Childs was born in Oxton, Nottinghamshire about 1806.  In 1842 he married Elizabeth Brentnall, of the Burr Lane Brentnall family.

Bagshaw’s Directory of 1846 includes him as a ‘glass and china dealer’ in the Market Place area, where he used the Roundhouse as a store-room for furniture after it was no longer needed as a ‘lock-up’. 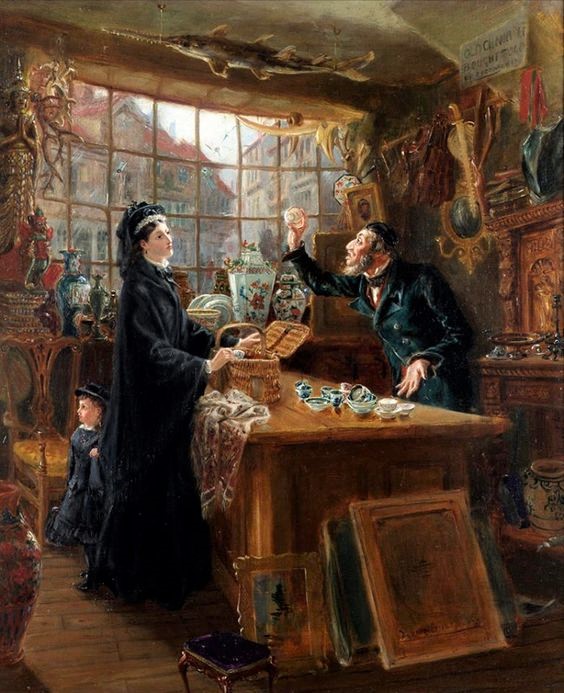 In the early 1860’s the Childs moved into Bath Street, close to Joseph Carrier, when John was then also a furniture dealer.

In February 1883 ‘Mrs. Childs’ retired as teacher at the Sunday School of the United Methodist Free Church in South Street .. a post she had held for 58 years. (IA 1883)

John Childs retired from business in March 1877 and in July moved into Market Street where he died on January 17th, 1891, aged 85.
He was buried in Stanton Road Cemetery.
Elizabeth had died of bronco-pneumonia in Market Street on January 15th, 1885, aged 76.

Gap Alert !! Adoption Policy
Adeline recalls that “Mr. and Mrs. Childs, who had no children, adopted a niece – Millicent Fisher.”

The adopted niece?  Born in 1843 I believe that Millicent Fisher appears on the 1851 census living at Kimberley as the daughter of framework knitter and widower George. His wife Maria (nee Spencer) had died in 1848.
He may have been the son of Francis Sison Fisher and Frances (nee Brentnall).
The 1926 Adoption Act introduced legal adoption into England and Wales in 1927. Before that date informal and private arrangements akin to what we might regard as fostering or guardianship were commonplace, with few if any relevant records.

Consider this example of community ‘fostering‘ and adoption from the late Victorian period.
In 1891, Enoch Henshaw was a 40+ widowed coalminer who, for over two years, had been living in Cotmanhay Road with widow Mary Bacon and her nine-year-old son. Then, rather unexpectedly, Mary left, leaving her son behind. A week or so later Enoch sent the lad to find his mother, wanting her ‘to sign the boy over ‘ — he was prepared to house the boy and look after him if she agreed. However, Mary did not sign, but kept the son with her, though Enoch reaffirmed his promise to the lad — if he had nowhere to sleep then he was always welcome at Enoch’s  house.
Mary and the son then stayed in several other households, each time the mother moving on while the lad was ‘deserted’ by her, left behind. At times he was found at night, crying in the Cotmanhay streets. Several families in Thorpe Street had seen him and taken him in, washed him, fed him, and clothed him, and eventually he came to the home of 25-year-old coalminer Charles Clifford at number 9. The latter and his wife were willing to keep the boy with theirown children, until he was grown up, but needed his mother to sign away her right to him, something she was, once more, unwilling to do.
However, at this point, the National Society for the Prevention of Cruelty to Children and the Ilkeston police decided to prosecute Mary, who they considered as a ‘very drunken woman of loose character’. She had caused her son unnecessary suffering and injury to his health, and when she appeared at Ilkeston Petty Sessions in August 1891 she was found guilty and sentenced to a month in jail. And now that she had been convicted, the magistrates could make an order to take the child out of her custody, and hand him over, until he was 14, to Charles and Mary Ann Clifford, who were willing to take care of him. That order was thus made.

The Oddfellows were organisations set up to care for and protect their members in times of hardship.

John Childs had joined the Duke of Rutland Lodge of Oddfellows, M.U.F.S. (Manchester Unity Friendly Society), on its opening night in Ilkeston in July 1828, and was a member up to his death. Thus the Pioneer referred to him as “probably the oldest Oddfellow in the Midland Counties”. (IP Jan 1891)
In 1831 John served as ‘NG’ (Noble Grand) of his lodge.

In July 1866 this Lodge held its triennial dinner and festival at the Sir John Warren — a sorry affair relative to previous occasions. To deter the too frequent ‘celebrations’ of such lodges, regulations were now in place such that the costs of such festivities could not be paid for out of lodge funds; members now had to be charged and this pushed up the price of the ‘bill of fare’.
Many in the Rutland Lodge therefore chose to avoid this expense and stayed away — not a single procession took place.
But not everything was cancelled.
‘At ten o’clock (am), the beautiful flag was hoisted out of the lodge-room, bearing suitable emblems of the objects of the order — provision for the sick and distressed, comfort for the bereaved widow and orphans.
‘The room was tastefully decorated with evergreens and flowers, and a sumptuous dinner was provided which reflected great praise to the worthy host and hostess.
‘The committee engaged the services of our talented townsmen, Mr. Joseph Tilson, and Mr. J. Goddard, sen, who rendered efficient aid in their capacity as musicians.
‘P.G. John Ball, the secretary, read the following report; —

— “In 1863 (the last festival) this lodge consisted of 261 members. Since then we have enlisted 50 amongst us. Six members and eight members’ wives have died. The total number good on our books at the present time is 310, 52 of whom pay their contributions into other lodges.
“During the three years we have relieved 168 members in time of sickness at a cost of £690, and up to the latter part of 1865 we had but four superannuated members, but now we have six receiving each a pension of  4s per week, and will continue to do so while they live, at a cost of £62 8s per annum.
“Also, during the three years we have paid £100 for deceased members, and members’ deceased wives, and numerous cases of distress have been alleviated.
“In a financial point of view this lodge is one of  the most prosperous in the unity”.

‘ …. ten o’clock (pm), when the company broke up, after a meeting of perfect harmony and conviviality’. (IP)

At that time the income for the Lodge came from a fortnightly subscription of 8d per member, plus an interest of £160 p.a. from capital.

There was a Female Friendly Society in Ilkeston which met around the corner at the Independent Chapel in Pimlico and was also known as ‘Shaw’s Club’, (after the Rev. Joshua Shaw of that chapel?)
It was dissolved in January 1876, after more than 60 years of existence, although no new members had been admitted to the society for over 20 years. Thus the majority of its members were old and infirm, and a constant strain on its funds. In the past, sick pay had often been suspended or reduced in order to keep the Club functioning. At its dissolution, funds of £200 were in the coffers to be distributed amongst 96 members.

By 1881 draper brothers Tom and Abraham Blood were occupying these premises, still number 10. However, following renumbering, by 1891 it was number 13. Then the property was described as having  “an imposing and conspicuous three storied frontage of about 20 feet in width and a good distance to the rear, comprising a well-fitted up shop, show and workrooms”.

In the photo above, it would be Elders Estate Agency, with the red lower facade.

In 1887 a brewer’s cart belonging to Daybrook Brewery was delivering stock to the Market Inn (almost) next door to the Blood Brothers establishment, when the horse attached to it started to back up. Before it could be brought under control, the cart had gone into the large plate glass window of the drapery, smashing it to fragments. The window was not insured !!

Surely not time for another drink ?!?  What a fortuitous coincidence ! We have just arrived at newly-replenished Market Tavern…. there it  is on the extreme left (top photo).