About 1872 … Joseph Carrier sold his property of Broad Meadow in Ilkeston to the Erewash Valley Iron Co. Ltd.

October 24th 1879 … Joseph Carrier died. In his will he left most of his estate to be divided between his wife Jane (nee Attenborough), his brothet Henry, and his brothers-in-law Isaac Attenborough and Edward Humphreys, husband of Sarah Attenborough. Both Isaac and Edward soon after renounced their bequests.

November 9th 1886 … Joseph Carrier junior, a grocer then trading in Bath Street, redeemed a mortgage, taken out by his uncle the late Samuel Carrier, and dated November 8th 1856. This mortgage had been on the two properties owned by Samuel in East Street, with their yard, a bakehouse, machine or smith’s shop, and other outbuildings. They can be seen at A on Plan 5 (in Part 2).

All these premises are shown in the following plan 9 dated March 26th 1901 and traced from a mortgage document of that date. 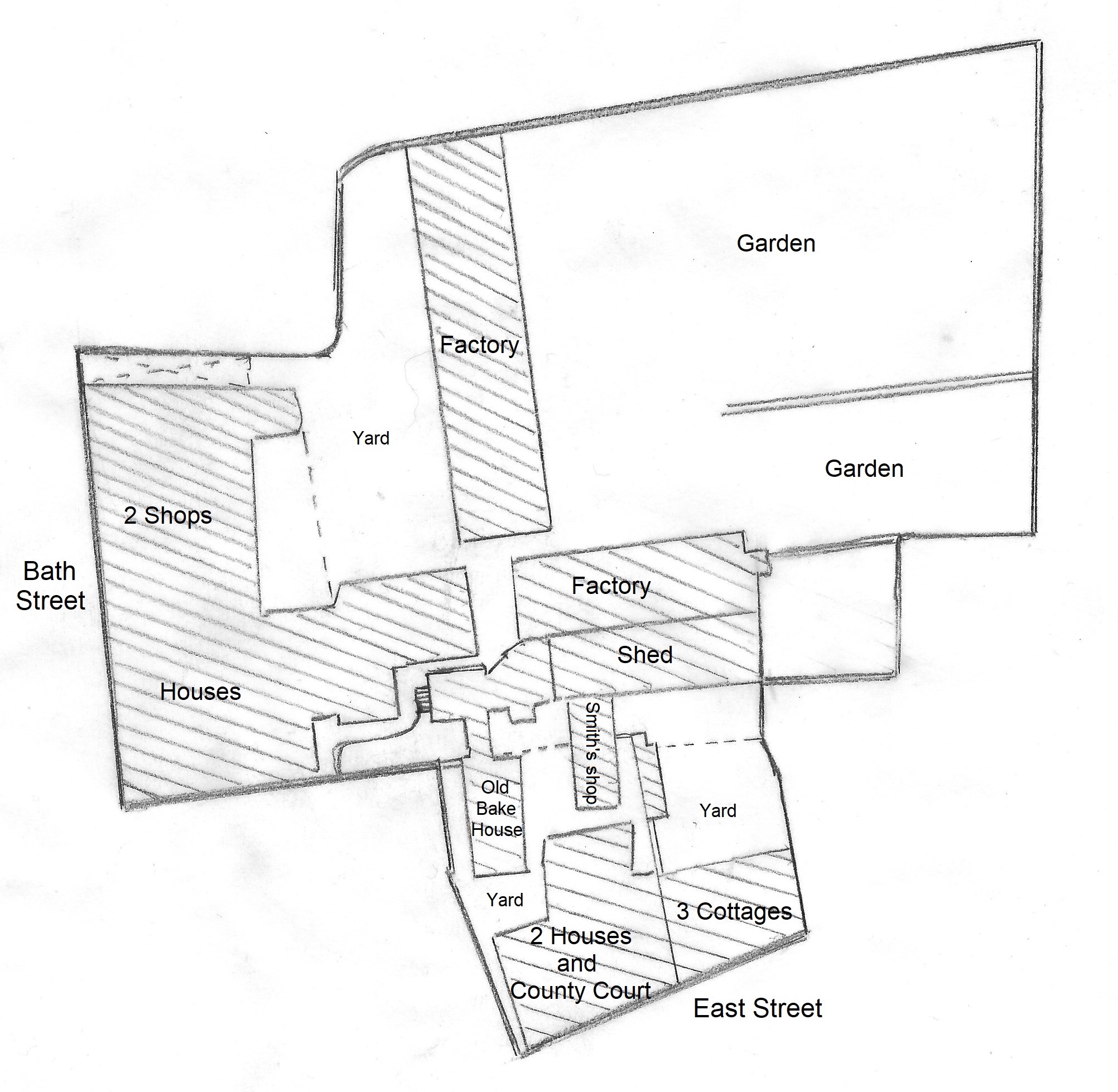 Two days after this William Henry Carrier, elder brother of Frances Alice and Henry Percy, died at his home of Uplands in Burr Lane, seen below, fronting onto Burr Lane and with Albion Place by its right (north) side. 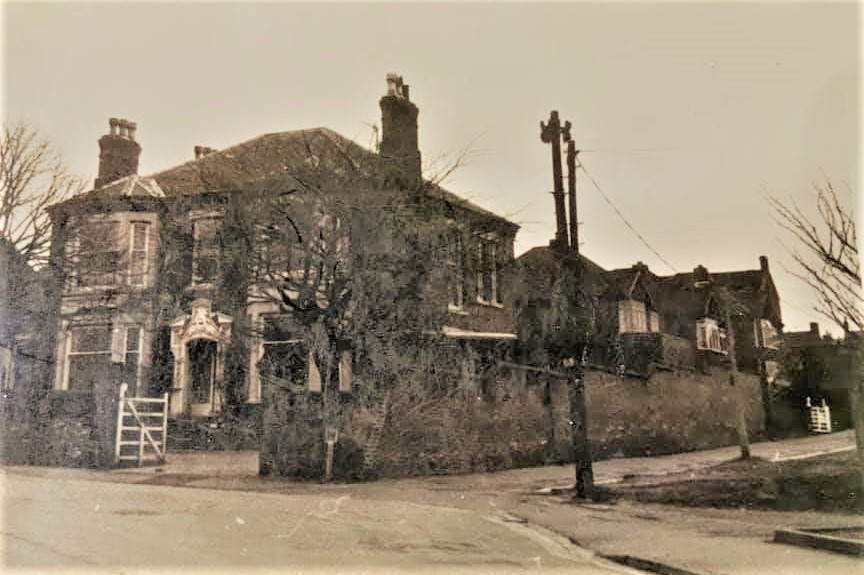 Perhaps it was this which prompted further ‘re-organisation’ of the Carrier property.  On May 1st 1901, Frances Alice and Henry Percy agreed to mortgage the Carrier premises to William Thomas Cartwright, solicitor, and Walter Seymour, bootmaker, both of Nottingham. More detail about the property was given at that time, and should be compared with the plan above.

The two shops and houses shown fronting on to Bath Street contained three businesses, numbered 10, 12 and 14, belonging to John Ormond, solicitor, Henry Thompson, draper, and John Simpson Derbyshire, a tea merchant and confectioner of West Bridgford (although the 1901 census shows this as an unoccupied fishmonger’s business).

Behind these premises was a factory now in the occupation of ‘representatives of the late William Henry Carrier’. And behind that factory was the garden of John Ormond. To the south of that garden was another, tenanted by Henry Thompson. Between that last garden and the shops and houses fronting on to Bath Street was a factory, lean-to shed, a smith’s shop, all now in the hands of the representatives of William Henry Carrier; the factory was divided from the houses and shops by a passage way.

Fronting East Street were the three cottages numbered 6, 7 and 8, occupied (respectively) by bootmaker Alfred Henshaw, general labourer Frederick Turton, and bricklayer’s labourer George James Lacey. To their west side were the two dwellings numbered 4 and 5, one lately used as the County Court Offices but now occupied by coalminer Jesse Handley and builder William Vincent Ireson (respectively). Behind this last named house was the bakehouse, now unoccupied.

On the north side of these Carrier premises was property belonging to Isaac Raynor and the late William Henry Carrier; on the east side was the land of Robert Marshall and stone mason William Bailey; on the south was the same property of William Bailey, East Street, and property belonging to solicitors Cattle and Nelson; and on the west side was in part the land of Isaac Rayner, mentioned before, Bath Street, and in part by the land of Messieurs Cattle and Nelson, mentioned before, and finally by the property of Shipstone and Sons. (Guess what that property was)

October 19th 1903 … the same property as that described above in Plan 9 was conveyed from Frances Alice Goddard and Henry Percy Carrier to Nottingham lace manufacturer Gottlieb Hoffmann, and lace warehousemen brothers William and Robert Skeavington Green, born in Ilkeston but now working in Nottingham. Previously the latter three  — on May 25th 1903 — had taken possession of the enfranchised house at number 9 East Street, then occupied by tenant George Scattergood. This had previously been occupied by Thomas Meakin and then by Charles Clarke.

On October 21st 1903 the three men mortgaged all this proprty to Frank James Doubleday, lace manufacturer.

On February 20th 1905 the Green brothers conveyed their holdings into the sole hands of Gottlieb Hoffmann.

On November 1st 1907 there was a mortgage transfer between William Thomas Cartwright and Walter Seymor of the one part, to Frank James Doubleday, on the other part.

The Columbines return to Ilkeston

On July 17th 1908, for the sum of £850, Eve Sandy conveyed to William Brailsford Columbine, hosiery manufacturer of 14 Curzon Street, Nottingham all her Carrier property — that is all property in the above plan dated March 26th 1901 plus the house numbered 9 East Street, previously occupied by George Scattergood.

On November 13th 1908 Frank James Doubleday, lace manufacturer of Nottingham, conveyed unto William Vincent Ireson, building contractor of Ilkeston, the premises of 4 and 5 East Street, the latter where William and his wife Eleanor Holyoake (nee Riley) were living. Eleanor was the daughter of ‘Radical Richard‘ of Bath Street. The 1911 census shows that number 5 had eight rooms, including the kitchen, whereas number 4 had six rooms. The factory to the north of the premises was then in the hands of “Henry Carrier and Sons Ltd”, the firm’s address at this time being 14 Bath Street.

June 25th 1915 and the whole of the remaining property of Frank James Doubleday was conveyed to William Brailsford Columbine, hosiery manufacturer, now of Ilkeston. A plan made of the property at that date was almost identical to Plan 9 above. However you might just make out that the property now did not include numbers 4 and 5 East Street, but it did now include number 9. 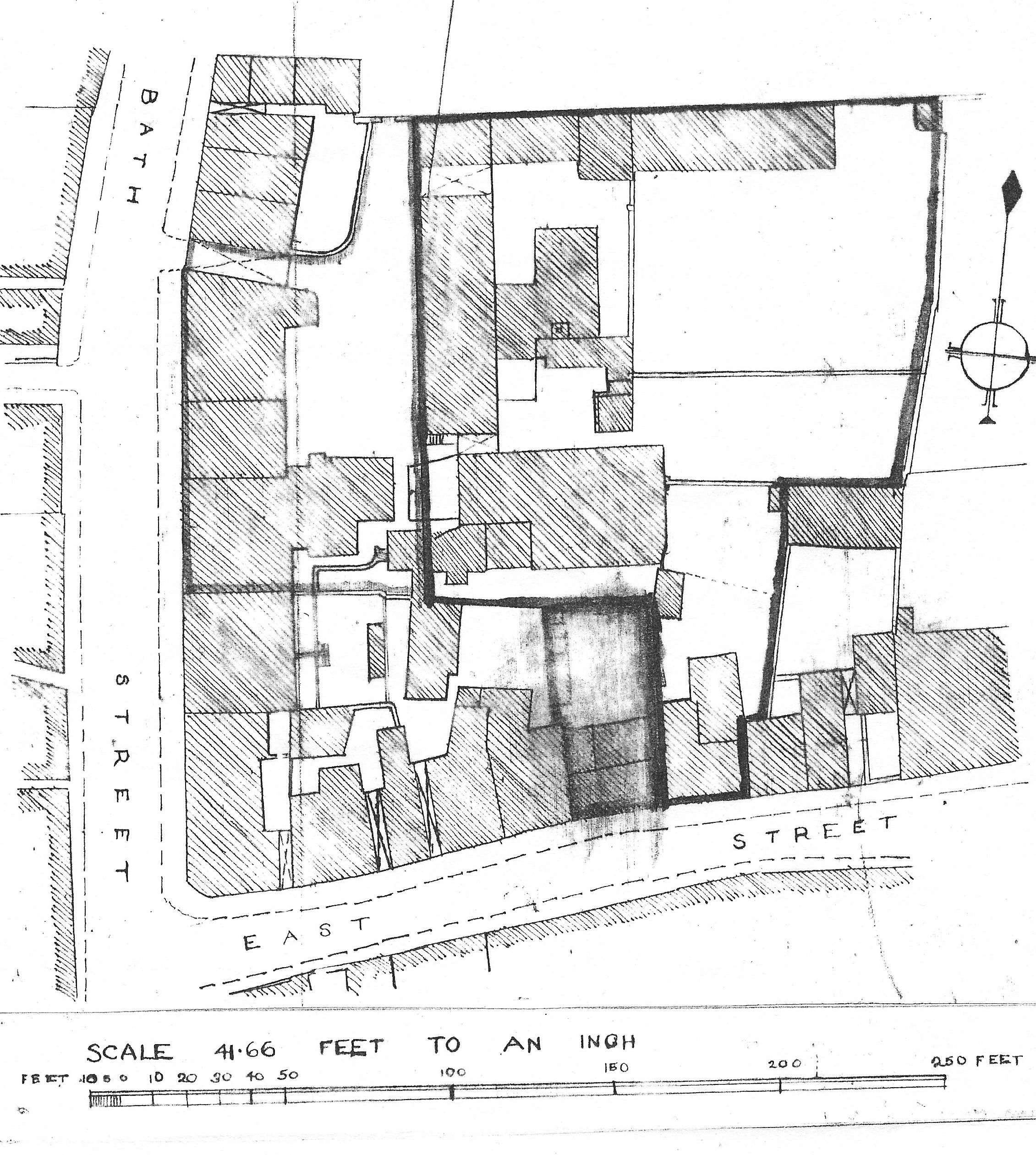 March 25th 1920 …. “Three shops and a dwelling house in Bath Street, now occupied by Henry Carrier and Sons Ltd., and used for the purpose of their business of hosiery manufacturers, the adjoining house now occupied by Mr. Beardsley and others as of fices, and the cottages in East Street with land in the rear adjoining the property of Mr. Ireson and other property of mine …. ” ….. Part of the Mortgage papers of William Brailsford Columbine to spinster Anna Sargeant of Old Colwyn

We will be back with the Carrier family when we arrive at East Street .. in the meantime, we will concentrate upon Joseph Carrier