The Church School at the Butter Market

Adeline recalls that “there were no Church Schools except the one over the Old Butter Market, which was for boys.”

Smedley’s Free School … when and where ?

Charity Schools, supported by public subscription, date back to at least the seventeenth century. Many were run by the Church, for the Church, stressing religious education.

In 1744 Richard Smedley had left a bequest of £10 per year to provide schooling for 36 or 40 children of the poorest of Ilkeston, ‘as the trustees think properest’, one of those trustees being the vicar of Ilkeston.
The school for these children was established two or three years after Richard Smedley had made his bequest.
Local historian Edgar Waterhouse argues that this school was not initially in the Butter Market but elsewhere, and contends that the first Roundhouse and Butter Market were not built until 1788, citing evidence from churchwarden accounts and town meeting records to support this.
He suggests that at this time there was a lot  of building activity around St. Mary’s Church; a wooden fence on the north boundary of the churchyard was taken down and replaced with a brick wall; on the south side the churchyard was extended when it took over part of Richard Hawley’s farm, standing next to the church, and a brick wall was probably built around this extension too; the first Roundhouse, the village gaol, was built at the same time as this wall-building around the church area, along with the adjoining Butter Market, and the school over it.

As Smedley’s Free School was set up around 1744 this would leave a gap of 44 years before the schoolroom at the Butter Market was built in 1788.
Where was the school for those 44 years?
Waterhouse suggests that it was in the Anchor Row area, in a cottage or barn, when the Manor Court Rolls in 1745 refer to ‘a building called the Schoolhouse, with a barn adjoining’.

In 1901 the Ilkeston Pioneer published extracts of a diary kept by Thomas Brown — father and grandfather of the Burr Lane Browns — for the year 1790, one of which states, “they began to build a strong house (the Roundhouse?) to put reveling company and bastard getters the 5 of July 1790; and began to build the church-yard wall round the 26 of July, 1790”.
This diary entry would seem to support that the Roundhouse was not built until about 1790. Perhaps the market house and school-room were built first and then shortly after the roundhouse was added?
Helpfully, Edgar Waterhouse adds that John Beardsley, the butcher, was also the warden when the churchyard was walled and the Butter Market and Roundhouse built …. this would be after 1780 (John was churchwarden from 1780 to 1798).

As a further piece of evidence, Edgar adds detail about a dispute over the churchyard wall with the Duke of Rutland in 1837, at which time it was put on record that “the market house and school were built by public subscription and have been possessed without dispute for 49 years”.

In 1826 a schoolmaster with £10 a year was teaching 30 children to read at this school.

An 1843 report on schools in Derbyshire by the Rev. John Allen adds that this is the only Ilkeston school for the poor in a town population of 6000; it amounts to a room 12 feet square and attended by 48 children.
‘The atmosphere was scarcely tolerable’.

To what is this letter-writer referring to when he mentions the school near the toll-bar ? 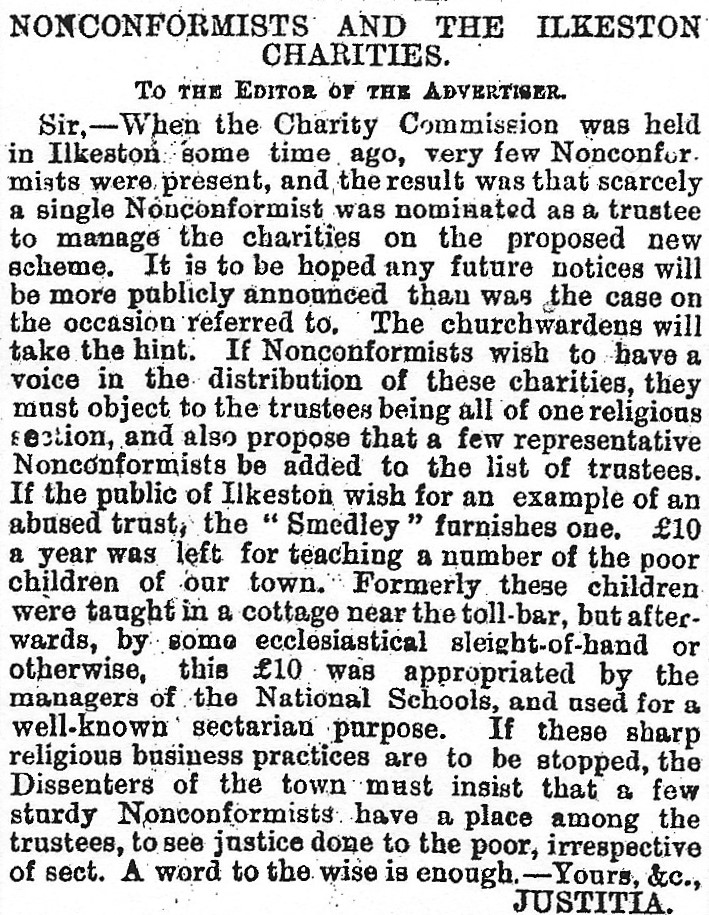 From the Ilkeston Advertiser September 1st, 1883

In his Directory of 1846 Bagshaw records that 93 children attend this school, each paying 1d per week, the master now receiving £20 per year from Smedley’s charity.
That master was William Preston Cragg who had been there at least since 1843 and left in 1846 to return to his native Barrow on Soar.

“Cragg and Milner (another local teacher), both of them peg-legs, we used to call them”. (Enquirer)

In the same year the vicar of St. Mary’s, George Searl Ebsworth, noted that the first class of this school was reasonably versed in reading, writing and arithmetic but the pupils knew “no geography, could not repeat the Catechism, and were unable to answer a question on the history of Joseph which they had just been reading”.

In the 1840’s the Butter Market School housed the Parochial Library of 400 volumes, and was open to exchange books on Sunday evening 4pm to 6pm. William Preston Cragg was the librarian until 1846.

Master of the school, 1846-1850, was William Charles Smith, ‘mild in temper’.
In April 1849 he married Ann, the eldest daughter of John Attenborough, schoolmaster of Watnall School, and Dorothy (nee Buckland), and niece of Mark Attenborough, landlord of the Sir John Warren Arms in the Market Place.
The couple emigrated to Australia in 1851 but William Charles invited his scholars to pay him a visit at any time.
In November 1852 the Pioneer reported that William Charles was now digging for gold in Adelaide.
Ann died at Horsham, Victoria in June 1880, aged 57. Her cousin John Attenborough, son of Joseph and Ann (nee Buckland), died at Natimuk, Victoria – a small town just a few miles west of Horsham – in January 1881, aged 51.

John Ryder, a severe disciplinarian, followed William Charles Smith as headmaster of the Church School, 1850-1853.
One of his pupils was Gisborne Brown, son of Kensington framework knitter George and Amy (nee Buss) and who recalled one of his contemporaries in a letter to the Pioneer in 1917.
“Esau Hooley had misbehaved himself, so was made to stand against the wall awaiting punishment. It was at that time Esau’s custom to take a heavy whip with him to school every afternoon, with which he used to take his father’s cows home out of a field at the bottom of Green’s-lane; so when Esau saw his master coming with the cane to punish him, he snatched the whip from its hanging-place and struck his master across the left cheek, which left a mark that took many days to wear off. The master, being a tall and strong man, soon got the best of the fight, by thrashing Esau severely with the cane”.
Although big and strong, this lad was only about 12 years old, son of Esau senior, a cordwainer of Hungerhill in Nottingham Road. Esau senior came to school the following day to remonstrate with John, and the argument of the two men led to the appearance of the Vicar to soothe tempers. The result was that Esau junior promised he would not repeat the offence.
On Sunday July 31st 1853 the annual sermons on behalf of the Church and National Schools were held and these were followed four days later by the vicar’s afternoon sermon to the children of those schools. Then, preceded by the Ilkeston Band, these 500 children were lead to the lawn in front of the Vicarage where they were treated to tea and plum cake. This was followed by a tea at the National schoolrooms for teachers and friends who were serenaded by the school choir ‘under the able and talented leader’ John Ryder.

“Great praise is due to Mr. Ryder for his unwearied exertions; in training them to the perfection they have arrived at; both their parents and the church in general ought to feel grateful to him”. (NG)

In October 1853, John Ryder left the school for a new post at Brailsford. At his leaving ‘party’ the Rev. Ebsworth alluded to the excellent state of discipline and knowledge to which John had raised the school, and which had been highly commended by Government inspectors only the week before. As leaving presents the departing teacher received bound editions of Heber’s Journal from the Rev. Ebsworth, the Church Services from churchwarden Riley and Maunsell’s Treasury of Knowledge from the choir.

From Brailsford John moved on to serve as master at the National Schools in Uttoxeter and in the Spring of 1878 was appointed master of the Abbots Bromley Board School.

William Whitehead (1854-1856) and John Gadsby (1856-1857) followed as headmaster.
William was son of Samuel and Lois (nee Ellis) and in 1860 was to marry Joanna Frost, sister of William, a later headmaster (see below). We shall meet them briefly, further down Bath Street. (See Samuel Whitehead, Hero of Waterloo).

In 1857 the headmaster was John Edwin Robinson of Birmingham, who later became Secretary to the Merchant Taylors’ School, London. A former pupil, Old Resident, recalls him as “a handsome man, with wavy jet black hair….a great favourite with all his pupils”. ….a keen photographer “at a time when only the old glass plates were used. I can see him now in my mind’s eye, standing with his back to the fire, and wrapped in thought. Presently one of us was despatched to fetch his camera, and then the fun commenced. The school had a back door which gave access to the churchyard; and I well remember a group of us being taken as we were snowballing each other amongst the grave-mounds”.
John Edwin left the school in 1861, but not before a new school was built for the boys in the Market Place.
He died on February 27th 1887, aged 50.

“Mr. Spendlove was an early master, if not the first, at the Church School. He died after a short illness, and was followed by Mr. Frost”.

John Edwin’s place was taken by John James Spendlove, born at Thurning, Huntingdonshire in 1841, son of beerhouse keeper James and Mary. Formerly a pupil-teacher at St. Ives’ National Schools, John James gained a first class Queen’s Scholarship at Christmas 1859 and later a first class teaching certificate.
In March 1864 he married Elizabeth Denham Bussey, youngest daughter of James, cork manufacturer of Bridlesmith Gate, Nottingham, and Matilda (nee Dance) and niece by marriage to William Marshall, baker of Regent Street with whom she lived before her marriage.
Their one child, Lucy Susan, was later to marry Tom Nichols Lissett in 1892.
Aged 24, John James died of consumption in January 1866 and was succeeded by A. G. Hughes (1866-1870) and then by the long-serving William Frost (1870-1895).

(The Government and Education; first steps)