An Ilkeston Volunteer force of over 65 men, under the command of Captain James Potter junior, aided by two subalterns, three sergeants, three corporals and two drummers, had been set up in late 1803.

They were kitted out with a red uniforms and white breeches, and were ‘rewarded’ with payment for 20 days training each year.

In return they had to “agree to march to any part of Great Britain for the defence thereof, in case of actual invasion or the appearence of an enemy in force upon the coast, and for the suppression of such rebellion or insurrection arising or existing at the time of such invasion”.

The enemy of course, at that time, were the dastardly French led by Napoleon !!

right; Caricature of Napoleon, beheaded, in the hypothetical scenario of an invasion of England. Depicts John Bull holding Napoleon’s head on a pitchfork.(Wikipedia) 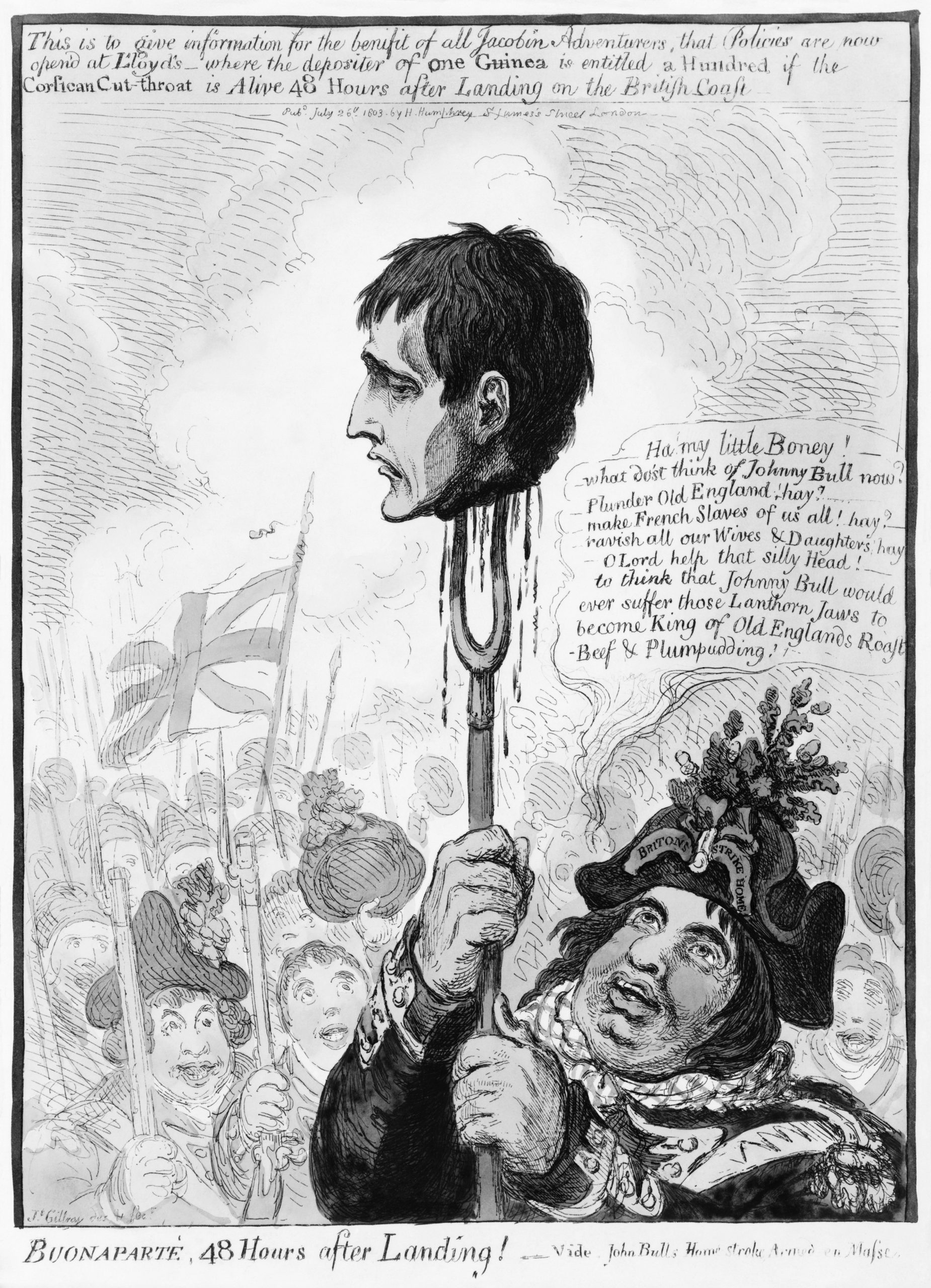 In the Ilkeston Pioneer of 1854, ‘Venerable Whitehead’ contributed one of a series of articles in which he reflected upon the military background of some of Ilkeston’s residents.
He wrote of the ‘Veteran Whitehead’, a ‘glorious old fellow‘ who climbs the old church tower twice a day ….
‘Octogenarian as he is, he wouldn’t mind again shouldering musket and marching against his country’s foe … There would be worse soldiers in the field than Serjeant Whitehead’.
(He was referring to Samuel Whitehead of Lower Bath Street, who was a corporal when discharged from the army in 1818 and who wasn’t quite an octogenarian in 1853. At that time he had been Parish Clerk for over ten years and was to remain thus for another ten years.)

In the same account Venerable Whitehead mentioned other renown captains, lieutenants and ensigns at Shipley (the Mundy family), at the Park (the Potters), and at Dalby House (the Norman family).
‘Hurray for the Ilkeston Volunteers !’ he exclaimed … ‘the Russian (Crimean) War may yet make demands on the regular troops which will render it necessary for true patriotism to manifest itself at home. Picks and maundrills may yet have to be turned into swords, and I’ll warrant that the brave miners of Ilkeston would use them’.

The Crimean War of 1853-1856 and the responsibility of policing a large Empire throughout the world had exposed the British Army to severe pressures in the 1850’s. When a worsening of Anglo-French relations in 1858 was followed by the outbreak of a Franco-Austrian War in 1859, the British Government feared a possible invasion by overwhelming French forces. Consequently in that year it sanctioned the formation of volunteer rifle corps.

Birth
The Corps was formed in July 1860 when for the first time the Volunteers assembled at the Rutland Hotel, marched to Shipley for a general meeting at which various officers were elected and at the end of which the men marched back to Ilkeston, led by the Brass Band. A short address in the Market Place by Lieutenant Whitehouse was followed by an adjournment to the Sir John Warren ‘where refreshments were dealt out freely to all’.

After the National Schools in the Market Place were built, the old schoolroom above the Butter Market continued to be used occasionally by the “16th Derbyshire”. This group of amateur soldiers, attired in grey uniforms, wearing plumes of red and grey intermixed, was led by local dignitaries like ‘captain’ Meynell Mundy of Shipley Hall, ‘lieutenant’ Edwin Smith Whitehouse of Little Hallam, and ‘ensign’ Philip Potter of  the Park.

In its ranks were included Lambert and William Small, John Sowray, and Joe Aldred –

“I have a distinct recollection of Joe Aldred, the portly landlord of the Old Harrow, coming across the market-place wearing a coat which did not meet by three or four inches, a palpable misfit”. (Old Resident)

“The old Ilkeston Rifle Corps had their rifle practice at the West Hallam Ironworks of Messrs. H(enry) B(ickerton) Whitehouse and Sons, the butts being placed in the front of a very large heap of slag.
“Here, in the summer of 1860, a serious and lamentable accident occurred to Mr. James Milner, of Heanor, by the bursting of his rifle, which so lacerated his left hand that it became necessary to remove the greater portion of it, leaving only the little finger. This gentleman, in after life became a Church clergyman, and was for many years Rector of Islandmagee, Belfast, his life here being of patriotism and exemplarity. He resigned his living and the last year of his life was spent at Seacombe (Birkenhead), where he died in October, 1916, at the age of 82½ years.
“The Armoury and Drill Instructor’s house was provided by the late A. M. Mundy Esq., in Shipley Wood, near the lodge now kept by Mr. Samuel Hallam. My people fitted up the armoury and house, entirely at Mr. Mundy’s expense, and I notice in their ledgers the last work done was on 21st February, 1862, so that is most probably the year that the Corps were disbanded”.
(from a letter to the Pioneer in June 1917 written by Joseph Belfield Shorthose. His father Robert was a carpenter at Shipley).

During its short life of just three/two years the ‘gallant 16th’ took part in several military reviews, led church parades up Bath Street, headed by its own band, and marched often to Shipley Hall to be welcomed by bread and cheese and beer, after ‘their stiff march up the hill’.
However at the end of one such march the Company was ordered to pile its arms in the courtyard of Shipley Hall, and the men were then dismissed.
July 1863 marked the end of the group which returned to Ilkeston, its band playing ‘Oh, dear, what can the matter be?’

We are at a crowded gathering at the National Schoolroom on the Old Cricket Ground in March 1878, where the ‘most enthusiastic audience’ was calling for the establishment of (another) Volunteer Corps for Ilkeston. This was stimulated by the Eastern Question, the crisis in the Balkan area and the Russo-Turkish War which had broken out in 1877.
The meeting was chaired by the ‘warrior’ Vicar of Ilkeston, the Rev Nash Eyre, and addressed by old soldier Reuben Harrison** (see below) – medal on his breast — and then by butcher William Mellor ‘in a most vigorous manner’ appealing to the patriotism of his townsmen to join the movement. The latter ‘resumed his seat amid tremendous applause’.
The agreed outcome was to approach Alfred Edward Miller Mundy Esq. of Shipley Hall and ask him to accept the captaincy of the corps.
A few weeks later at the same venue and an expectant audience of members of the new Rifle Volunteers awaited the arrival of their newly-appointed officers.
They waited … and waited … and waited.
Not a single officer appeared and the disappointed members dispersed.
These absentee officers were Councillor Tutin of Nottingham (captain), Nottingham solicitor John Black (lieutenant), Edward Robson Morley of Nottingham (second lieutenant), John Potter of Ilkeston Park (ensign), and the Rev. Nash Eyre (chaplain).

A week later and another meeting … but this time with a difference. The Officers had arrived!!
To herald their arrival the Church bells were ringing and the Brass Band was playing. Then the audience of about 100 young prospective recruits settled down at the National Schoolroom to listen to the speeches. They were told that an application would need to be made to the War Office for the formation of the corps – to be known as the 16th Derbyshire – and they would need to wait for the outcome.
The Ilkeston Brass Band once more offered their services, despite the fact that they were warned that they too would have to take part in drill just like the volunteers.

A month later and the enthusiasm was dissipating. Times were hard and money was scarce, even when it was needed to finance philanthropic patriotism. The future of the nascent Volunteer Corps looked bleak.
The ‘’warrior’ Vicar’s fund-raising bazaar was on hold and the Pioneer was speculating that Captain Tutin would soon part from his ‘Company’.
“Is the adage concerning the rocket and the stick to be again verified anent our local squad? It looks as though the letter ‘e’ has fallen into the rear of our corps”.
(Translation: ‘To rise like a rocket, to fall like a stick’, paraphrasing the words (1792) of Thomas Paine, English political writer.
‘Anent’ means ‘with respect to’ … yes, I had to look it up!!)
Perhaps the ‘warrior’ Vicar was preoccupied with matters other than the Volunteers. On August 20th 1878 his wife of over 20 years, Frances (nee Pennington), died at the Vicarage.
It appears that this Volunteer Corps had also died.

Rebirth
However in May 1880, the ‘warrior’ Vicar’s son, John Villiers Eyre, tried again.

‘The town having been unrepresented by the military for several years’, he formed a detachment of the Long Eaton Corps of the 1st Derbyshire Rifle Volunteers, which held its first drill at the Boy’s National School.
By October the recruits had proved  to be one of the best squads ever seen by Captain Wirgman, who had not the slightest doubt that in due time they would form a very valuable portion of the battalion.
“The Captain also observed that most probably an effort would be made to raise butts somewhere in the neighbourhood, where the volunteers could have shooting practice”. (IP)
The lads were rewarded with a slap-up dinner at the Old Harrow Inn.

John Villiers Eyre was the eldest son of Vicar John and his first wife Frances (nee Pennington). He was born at Denholme Gate Vicarage near Bingley in 1863 — his father was vicar there from 1861 to 1871.
In January 1883 his name appeared in the London Gazette announcing that he was to be Lieutenant in the 4th Battalion, the Sherwood Foresters (Derbyshire Regiment). The Ilkeston Advertiser added detail that he had been 18 months at Woolwich and had passed and obtained a First Class certificate for the St. John’s Ambulance Corps, and first class for general education.

** Reuben Harrison was the son of framework knitter William and Mary (nee Beardsley).

He attested for service with the 32nd Regiment of Foot on February 13th 1824 at Nottingham, aged 20, — Reuben made his mark — and on the following day was baptised at St. Mary’s Church, Ilkeston, when his birth date was recorded as August 21st 1802.
His service lasted for nearly 22 years, half of that time abroad — eleven years in Canada and six months in the Ionian Islands.
He was discharged, as a private, at Athlone, Ireland, on November 3rd 1845, when his army records showed ‘a very good and efficient soldier, seldom in Hospital, trustworthy and sober (and) in possession of two distinguishing marks for good conduct’. His discharge was a consequence of chronic rheumatism and catarrh. By then he was 41¾ years of age — 5 feet 6½ inches tall, dark brown hair, hazel eyes and a fresh complexion.
Reuben returned to Ilkeston, taking up his original trade as a framework knitter, and almost a year later he married Frances ‘Fanny’ Severn, daughter of James and Elizabeth (nee Thornally) at All Saints Church, Kirk Hallam (October 13th 1846).
In July 1866 Reuben was working at the wharf of Potter’s Colliery, off Bath Street — ‘an old pensioner and a teacher in the Church Sunday school, and who is greatly respected in the town’ — when he stumbled over a piece of coal, fell with a hand on the rail, just as the trucks were passing. His hand was severely crushed, so severely that surgeon George Blake Norman had to amputate at the wrist. Suitably bandaged up, Reuben then walked to his Belper Street home, about a quarter of a mile, accompanied by the Vicar, James Horsburgh. (IP)

Did he return to work the following day ?!

In his annual report, Captain Gower stated that the detachment numbered 147 ‘efficients’ out of a possible 150, up on previous years.

And before we move on, a final look around the Market Place.