A row of houses

We are now walking southwards along the left-hand side of South Street (the west side), leaving behind the Nag’s Head, and on towards West Street, previously named Wide Yard. 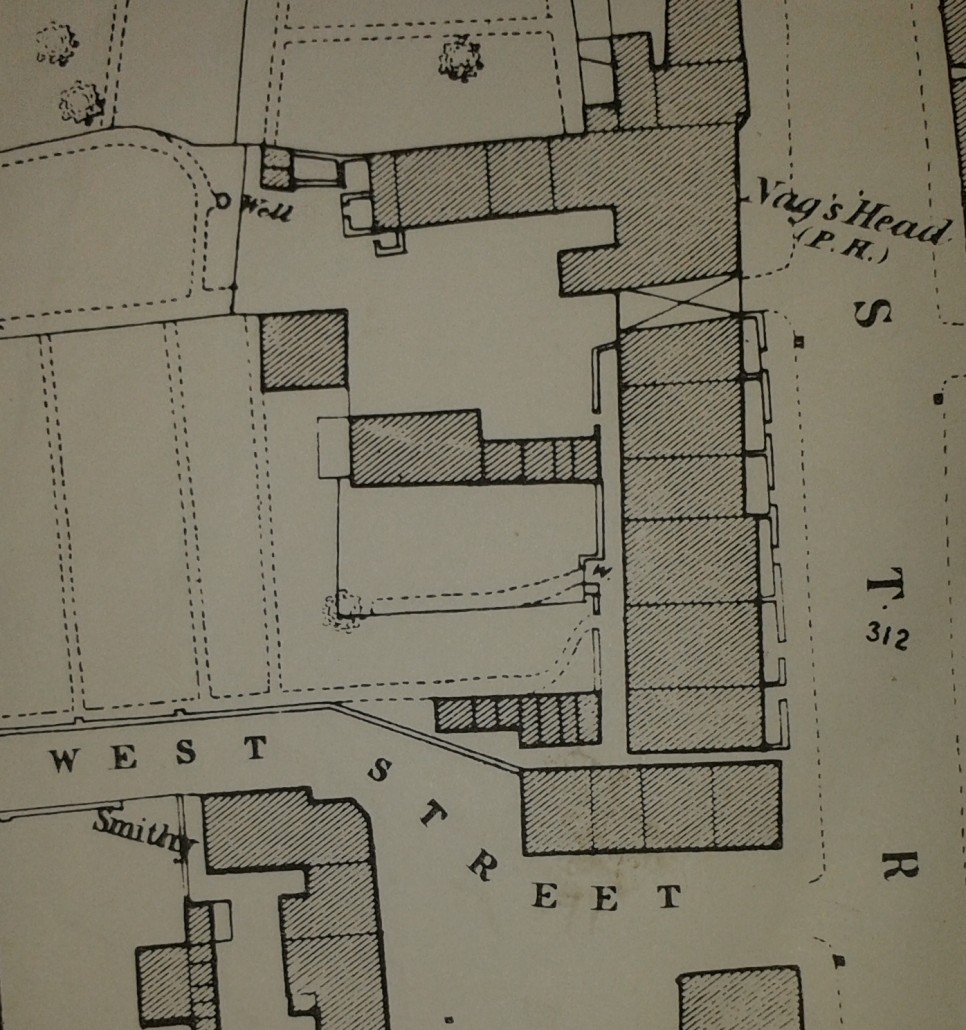 Adeline list them and their occupiers …. “In the five/six houses past the Nag’s Head were ….

Mrs. Clark who had lodgers.…

This was 49 South Street in 1871 and 1881; it was 40 South Street in 1891 and remained so, into the next century. (Only even numbers on this side of South Street now)
Robert Clarke and his wife, Louisa (nee Potter) came from the agricultural district between Nottingham and Newark to settle in Ilkeston, in the 1860’s. They were at this house on the 1871 census … with a couple of lodgers.

Robert died in July 1873, and on October 19th, 1874 Louisa remarried to brickmaker and widower William Kelly. With his first wife Mary (nee Shaw) William had been a long term resident of Club Row and had fathered 13 children — before Mary died on June 12th 1871, in Club Row. However, when he married Louisa he moved into the South Street premises, and was there on the 1881 census.

William Kelly died in 1883 and Louisa was once more alone, but not for long !! Just round the corner, at Queen Street Baptist Church, she married framework knitter and three-times married John Meakin in 1885 — she was about 68 and he was 74.

John died in 1893 and Louisa, I believe, died in 1895. By the end of the century the property was occupied by lacemaker Thomas Bostock, and wife Eliza (nee Straw).

The next house (Adeline has nothing to write about its occupants)

On the 1861 census Hannah Shaw is living here with her coalminer son George, aged 17, and by the time the houses were numbered — for the 1871 Census — she was still living there. She was born Hannah Wainwright and had married coalminer John Shaw on November 24th 1841. However, after the birth of son George in 1843, the husband seems to have quickly disappeared from the scene, so that by 1861 Hannah had a ‘lodger’, coalminer Isaac Stirland. And on August 7th 1873, the pair were married — had Hannah’s first husband died ?
On the 1881 census they are at the same house but (carelessly?) the enumerator had labelled them as Isaac and Hannah Shaw.
By 1891 the house had been renumbered as 42, and Isaac and Hannah had been ‘renamed’ as ‘Stirland’
At the end of the century it was occupied by the Orme family.

This should be 47 South Street but at the time ‘Mrs Smith‘ was living there in the 1860s the houses were unnumbered.

Grocer John Smith lived many years in South Street and when his first wife Mary died in June 1846 he took in a ‘housekeeper’ Sarah Robinson, the daughter of Awsworth coalminer Solomon and Sarah (nee Chambers).
On August 2nd, 1857 the two were married and continued to live in that street. She would be ‘Mrs Smith’ ?
John died there on July 9th, 1868, aged 73.

By 1871 the house was occupied by framework knitter/glove maker John Eaton, whose first wife Mary Ann (nee Winfield) had died in 1863. On May 19th, 1869 he had then married Eliza, the daughter of framework knitter Samuel Hooley and Elizabeth (nee Bostock). His bride had already been widowed twice. Her first husband was collier Aaron Spowage whom she had married on August 9th, 1840 — three children and six years later, he died on January 19th, 1846, aged 26.
Now living at Baptist Chapel Yard, just up the road, with collier Joseph Smith as her lodger, Eliza now had three illegitimate children to add to the family, though only daughter Elizabeth survived into adulthood. Eliza married her lodger on February 13th, 1866.
However Joseph Smith was not a well man; over the winter of 1866/67 he was constantly ‘poorly‘ and had not recovered his health by the following summer. Despite ailing, on the Saturday night of June 1st, he went out, peddling nuts, returning home just after midnight.. He sat in the kitchen, had a piece of bread and cheese, and then went to bed half-an-hour later. In the night he began to cough violently, passed blood through his mouth and within 20 minutes was dead. Quickly Dr. Date was sent for but he could do nothing except confirm that Joseph was dead. A few days later, the inquest into the death gave the cause as ‘a rupture of one or more vessels of the lungs’.
Then in 1869 Eliza Smith (formerly Spowage, nee Hooley) married John Eaton — he was aged 63 and she was ten years younger.
John died in August 1880 and on the 1881 census the home in South Street was now uninhabited.

By 1891 it had become 44 South Street and was occupied by coalminer Michael Callinan, his wife Mary (nee Kennedy), their two children and Mary’s unmarried sister, Lucy. This was one of several households in this area with an Irish connection/pedigree.

then Mr. Rowley, a gardener, Mrs. Rowley was a laundress….

Like neighbour John Smith, William Rowley was a long-term resident of the road. The gardener and greengrocer came to Ilkeston in the late 1840’s with his wife, Eastwood-born Ann Goodere Rowley (nee Fletcher), daughter of William Fletcher and Ann (nee Savage), and their three children — Jane, Sarah and William.
One Monday at the end of April 1852, daughter Sarah, then aged 11, felt very ill and was put to bed. She died the following day.
Dr Norman conducted a postmortem but could find no reason for her sudden death. A verdict of ‘died from natural causes‘ was thus recorded at the inquest.

The couple remained here for the rest of their married lives, both dying in 1889, William a few months before Ann. On July 24th 1863, their eldest child, Jane, had married book-keeper Charles Straw, son of canal agent Samuel and Sarah (nee Rowland) of Straw’s Bridge, and I suspect that Ann died at the home of this daughter, at Canal Side in Stanton-by-Dale.
Were the deaths of William and Ann another example of the Broken Heart Syndrome ? They had been married and lived together for 55 years.

Shortly after the house was occupied by the Murray family, with Irish roots.

I forget the next tenant,

If this was 45 South Street in 1871, then the census shows fruiterer/green grocer Francis Daykin, originally of Belper, as the tenant, with his wife Sarah (nee Harrison) and sons Isaac and Henry.
He seems to have arrived in the street about 1870 and left shortly after the census to work as a coalminer in Handsworth. Son Henry was born in South Street in February 1871.

By 1891 it was 48 South Street, though missing off that census. By 1901 it was still a grocer’s shop, occupied by Richard Broadhurst and family.

At one point, Adeline does mention a Harrison connection with these houses; perhaps this is Sarah the wife of Francis Daykin ? I can’t yet detect another Harrison living in this row of houses.

and last was Mrs. Gregory……

Martha Cartwright, born in 1823, was the eldest child of journeyman* miller Richard and Catherine (nee Swanwick) and older sister of John Cartwright.
She was living in South Street with her parents and working as a straw bonnet maker when she married West Hallam- born engine worker William Gregory in April 1853, and continued in the same occupation in the same street for some years after. William and Catherine have featured earlier in our walk down South Street

*a journeyman was a worker who had completed his apprenticeship but was not yet a ‘master craftsman’. The name has not a lot to do with travelling but comes from the French word journée meaning day — the journeyman being paid by the day for his work.

By 1881 Martha had left with her children to live in Severn’s Yard, off High Street, later to move to Byron Street with her son Benjamin, where she died on February 14th, 1890.

After Martha’s departure from South Street, into the property moved the family of Irish couple, coalminer Thomas Kennedy and Catherine (nee Gadin).

Adeline remarks that “two of the cottages have been converted into shops”. Perhaps you can work out which two houses she is referring to ?

At this point, about October 1866, grocer William Wade opened a ‘branch shop’ (a lock-up ?)

And then we come to  Wide Yard and/or West Street.