The East side of Lower Market Place

I have put together this account of the two old inns on the east side of the Lower Market Place from the notes of the local historian, the late Edgar Waterhouse, along with detail from 18th and 19th century wills, mortgage documents, Manor Court Rolls and St. Mary’s parish registers. It is an extremely convoluted story and possibly only of interest to genealogists connected to the parties mentioned. It does show, however, how properties frequently changed tenants and owners, and how these owners/tenants were often interconnected or related. 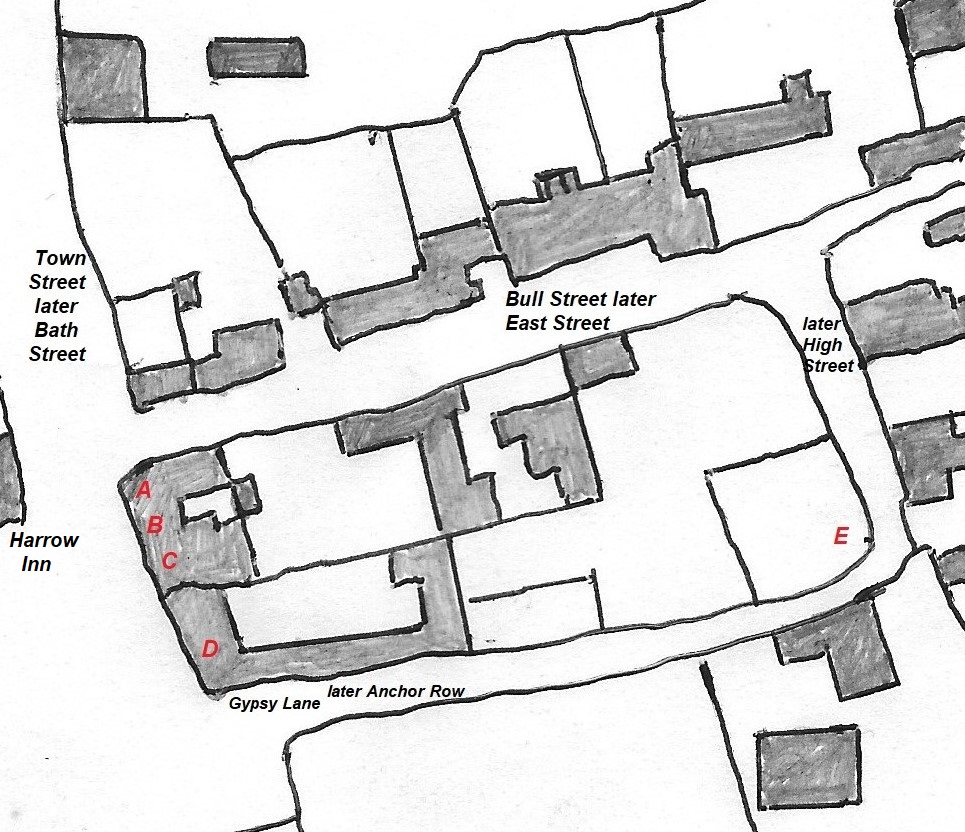 In November 1772 Creswell’s Nottingham Journal reported on an auction to be held on December 27th of a cottage and homestead at Ilkeston together with two areas of land. The sale was to be held at the Anchor Inn whose landlord was John Woollen (sic).

Edgar Waterhouse placed the Anchor Inn (at D)  next to the Unitarian Chapel (at E). He stated that the Inn undoubtedly gave its name to Anchor Row, formerly known as Gypsy Lane; and that it previously belonged to the Carrier family, several male members of which were given the name of Anchor …. “they may have given this name to the public house”.

One of these ‘Anchor Carriers’ died in 1739 and left his lands to his sons John and Thomas Carrier, who sold it on to Robert Fletcher of Stainsby Hall in Smalley. However the Anchor Inn was eventually mortgaged to Francis Elliott in 1789 … this was at the time that John Jackson was the landlord.

In his diary of 1790, a local named Thomas Brown writes that “ I and John West, Richard Rice, John Carrier, went after a rider as come from Manchester, is name is Collier, he left his gold glasses at Jackson’s (the Anchor) and we folled him to Stanton at John Scattergoods, (the Stanhope Arms ?), he gave’s sixpence .. Scattergood sent a letter by me to Harrison. They gave me a cup of ale. We went to Jackson’s and spent sixpence and penny piece to it. I got drunk.”

Edgar Waterhouse points out that “keeping a public house in the 18th century was a very dangerous job. At any rate it cost John Jackson his life. The parish registers contain the entry: Buried, John Jackson, who was murthered by a savage ruffian, February 6, 1791” He was also described as ‘keeper of the Anchor Inn‘. Edgar continues …. “Marshall, a Home Office expert, who made a survey of Derbyshire agriculture towards the end of the 18th century, was impressed by the strength of Derbyshire ale, which he described as ‘strong as brandy’, and perhaps the ‘savage ruffian’ who ‘murthered’ the Anchor landlord had taken too much of it’

Two years later John Jackson’s widow Mary (nee Stanley) married Isaac Atkin.
And in 1794, Thomas Carrier, eldest son of John and Esther (nee Woolin) inherited the inn from his recently deceased father (May 1793). Thomas quickly sold the Anchor Inn to the same Francis Elliott … at this time the landlord was none other than Isaac Adkin !!
Had Mary Jackson stayed at the Inn, married again and then continued to live there with her second husband ?

It seems that Isaac and Mary moved on to Little Hallam where he established another ‘Anchor Inn’, soon to change its name to the Bull’s Head. He mortgaged this to John Hawley of Shipley Lodge in August 1796 when it was described as “a newly erected Public House in Little Hallam“, and was using the name Anchor Inn. By 1810 it had changed its name to the Bull’s Head. at this time, Isaac and his wife Mary moved to farm at Willoughby on the Wolds in Nottinghamshire.

Meanwhile Francis Elliott sold the original Anchor Inn in the Market Place to Thomas Bradley junior in 1795. Born in 1770, he was the illegitimate son of clockmaker Thomas Bradley senior and Mary Smith, and was baptised as Thomas Bradley Smith. The child’s parents later married, on May 12th 1771. The Bradleys were part of a long line of Ilkeston innkeepeers. For example his younger brother was Henry who later traded as a beer seller up Heanor Road, and was then followed by a long line of Bradleys

After mortgaging the property to John Shaw senior, a timber merchant in Trowell, Thomas Bradley junior eventually sold it outright to John in December 1799. At this time John Richardson was the landlord.

And it was John Shaw who built the eight houses which stood in Anchor Row.

John Shaw senior passed the property on to his son, John junior of Arnold, who surrendered it to Matthew Hobson senior in July 1825. It would be logical to assume that some time between 1799 and 1825 therefore, that the Anchor alehouse ceased ‘to serve’.

Edgar Waterhouse places this on property ‘further along East Street, towards Bath Street’.

Elizabeth Carrier, the widow of (another) Anchor Carrier, who died in 1745, sold this property which stretched right from Bull Street (East Street) and up the lower Market Place, to Francis Cripps in 1750. It thus contained the King’s Head Inn which was at C as well as the premises at A and B. Francis was the son of the Rev. Thomas Cripps of Birthwaite, Yorkshire, and he sold it on to Ilkeston miller James Potter in 1774. Ten years later and it had changed hands again when it was bought by Samuel James who is described as a ‘mercer of Stanton‘. The landlord at this time was John Woolin who, in 1759, had married Hannah Carrier (nee Barker), the widow of Thomas Carrier who had died in 1756.

At the beginning of the 19th century all this property was still tenanted by ‘shopkeeper’ Samuel James who died on November 17th 1824 and who, in his will, bequeathed it all to his wife Elizabeth. She was Elizabeth Roe and had married Samuel on August 1st 1784, (at the same time as Samuel took over this property).

For the genealogists among you, Edgar Waterhouse gives us a bit more detail on this line … The Roes had been prominent farmers in the early part of the 18th century, and were also big tithe owners. One of them, Dorothy, married a Bennett, and got a big  lump of the Common in lieu of the tithes in 1794, when the Common was enclosed. Her lands descended to her niece, who married Samuel James from Stanton. (Dorothy Roe married John Bennett at Allestree, Derby, on June 6th 1753; she was buried at St. Mary’s Church on February 19th 1794)

Eliza was the niece of Thomas … she was the daughter of Henry Sharpe Horsley and Ann Dorothy (nee James, the sister of Thomas). In 1866 Eliza Horsley and George Bunting agreed to divide the estate fairly between themselves. 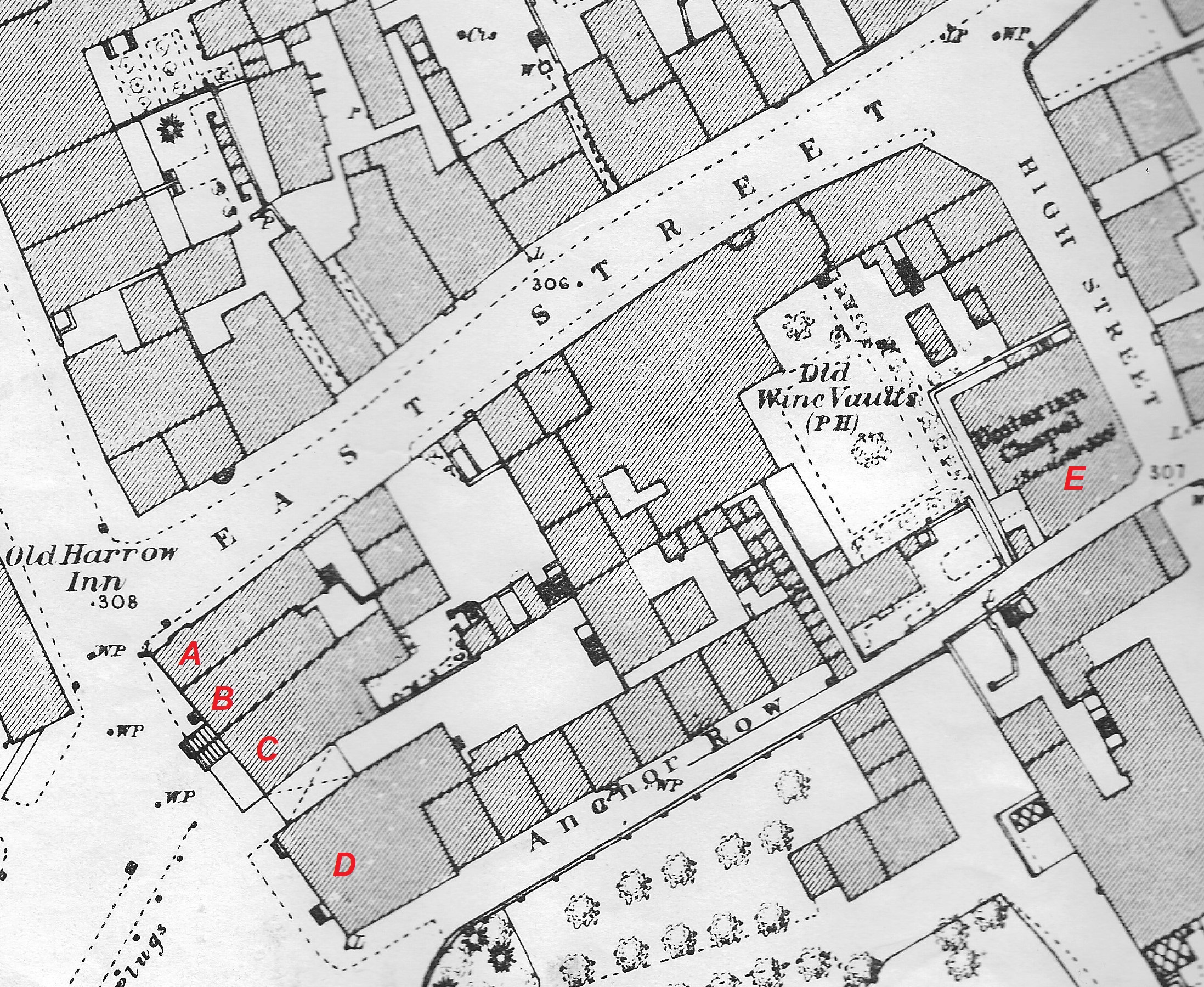 Looking at the map of 1881 (approx), George was to have the premises at A and B, with their yards; they had previously formed one property. Part of the Bunting premises had served as the home of cordwainer Paul Walker and his family … and also as Ilkeston’s Post Office since 1841.

Eliza was to have the rest — the house at C, and other residences across the yard at the rear and which had previously housed a brewery. This house had in fact been the King’s Head, one landlord being John Clower.

In the same 1790 diary mentioned above, stockingweaver Thomas Brown of Bull Lane (1765-1834) writes that he “entered into a sick club wich is held at the sign of King’s Head in Ilkeston in the year Anno Domini 1783 the 26 of May … Mary Rawdin, my mother-in-law, entered into a sick cluib of women at the house of John Clower, in Ilkeston, the County of Derby, June the 28th 1790” If Thomas’s diary is to be believed and I have interpreted it accurately, then both ale houses were serving at the same time and Thomas seems to have been a customer at both of them !!

Since that time it had been home to a succession of doctors. One of the first was William Parkinson who married Mary James on March 10th 1810 … and by so doing he had became the brother-in-law of Thomas Roe James and the uncle by marriage of Eliza Horsley. When William Parkinson died in 1837 he was followed by others of the same profession, until Robert Wood arrived about 1868. Hopefully you can see therefore why the house at C is often referred to as the  Doctors’ House.

It was occupied by surgeon Robert Wood from about 1868 but was still owned by Eliza Horsley. It was described as a house with ‘stable, yard, garden and outbuildings‘ .. you can see these features at the rear of the house; there appears to be a carriage entrance into the yard from East Street. The property was transferred to Robert Wood by Eliza Horsley in 1873.

The two adjacent houses, at A and B, also formerly belonging to Eliza Horsley but transferred to Robert in 1877.

Robert Wood was born in 1844, the only child of innkeeper Charles and Sarah (nee Charlesworth) … his mother had been previously married to Thomas Bunting, a Uttoxeter spirit merchant, from 1829 until Thomas’s death in 1841. There were at least four children of this marriage but so far I have not connected this Bunting family to that of next-door neighbour George (if there was a connection ?).

One final thought … if we started at George Bunting’s residence at A, then took a ten minute stroll down Anchor Row, left into High Street and then left again into East Street,  before arriving back at George’s shop, we would pass three inns at separate quadrants of this restricted area (though they were not all contemporary) … and time enough to enjoy a pint at each !! At the final quadrant we could rest and seek forgiveness from God for our drunkedness, at E.

In 1937 the Ilkeston Advertiser reported that “during excavations for the foundations of the Derby Trustee Savings Bank which is being erected at the corner of East Street, (see below) evidence has been forthcoming of a public house which once occupied the site on which the residence of the late Dr. Wood stood. This would have been the public house and maltrooms known as ‘The King’s Head’ which stood at this corner of Bath Street (not to be confused with the later King’s Head at the corner of Pimlico). And at the rear of the buildings which have been demolished there is a small building and spiral steps leading to what is believed to have been a chapel. This must be one of the very oldest bits of Ilkeston”. 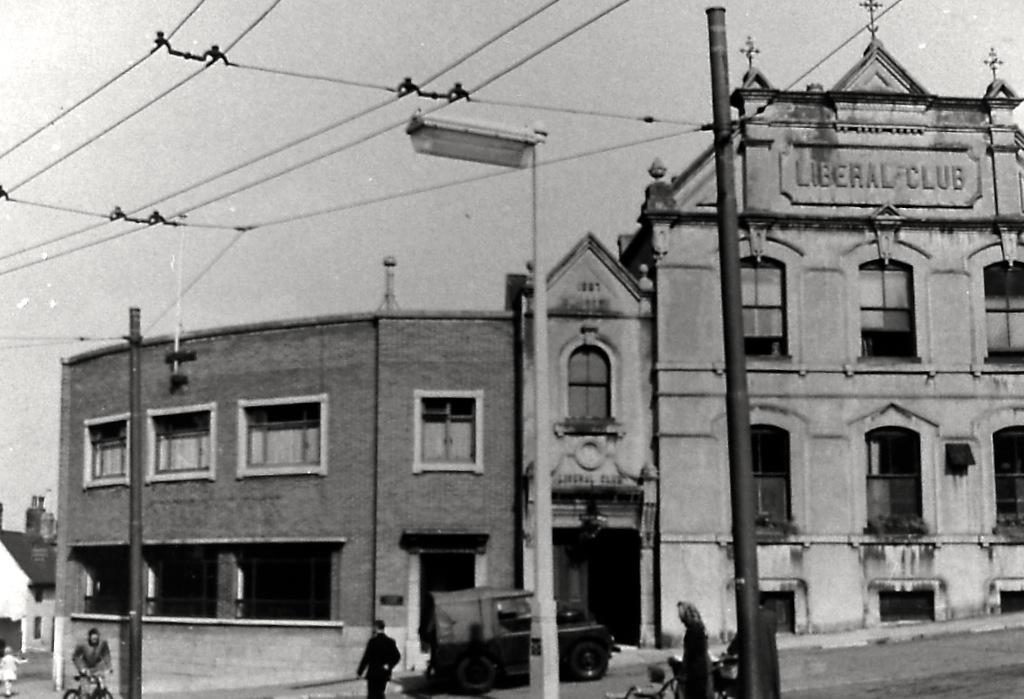 Above is a view of the East side of Lower Maket Place which may be familiar to you …. premises A, B and C would have occupied the site of the Bank on the left of this row.

Let us now examine each of these premises, starting with George Bunting at A