Having successfully completed Part 1 (with full marks), you can move on …

At this point, a new correspondent entered the conversation. This was John Cartwright (for he signed his actual name !!)

John was not a ‘native of Ilkeston’ but had arrived in the town in June 1841, then aged 7 and in the midst of a hard-fought general election campaign, between the ‘yellow’ Whig Party of Lord Melbourne and the ‘blue’ Conservative Party of Sir Robert Peel.

I noticed that all the children coming from school wore blue and yellow favours, and as some of my early playmates — amongst them the Gambles (Stansfield and William), the Sudburys (in particular Samuel, who took me to see the new baby, which baby was destined to be one of Ilkeston’s Mayors !), the Birches, the Hawleys, the Straws, the Aldreds, and others; as some of these went in for the yellow, I also turned Radical.

I recollect ‘O.P.Q’. well, also his good old father and mother, who were dear old friends of my own father and mother, but I did not attend his Academy. His father was a well-known local preacher amongst the Wesleyans, and his name was Fletcher, and he had a grand-daughter, whom I liked as well as any of the family.

The mention of Siddon’s reminds me of one of old Joe’s lads, who was one of the cleverest scholars at figures I ever knew.

I think your correspondent has got somewhat mixed as to the site of Hobson’s mill, in which I spent hundreds of happy hours along with my dear old father. I think I am correct in stating that Mr. Matthew Hobson built his residence on the hill where stood the mill, or that the precise spot is in the enclosed grounds. ‘Monkey Park’ is close by. This is not of much moment, but Mr. F. Sudbury, J.P., who lives on the spot, doubtless knows whether I am right. In the fields adjoining I have had many an afternoon’s bird-nesting, and in the summer have helped the jolly haymakers both with their hay and with their bread and cheese and small beer, or ‘four o’clock’ as it was called.

The last time I was in South-street I met the late Mr. Thos. Tomlinson, who soon afterwards died so suddenly at over 80 years old. For years he was my bootmaker, and the boots he turned out would astonish some folks of to-day. I wonder they ever wore out. I have sat for hours watching him wax and stitch and hammer, and methinks I see him now. He was a model man, and if there be any good ones, surely he was one of the few. His name reminds me of another old house to which ‘Kensington‘ must refer — the next block, to which we used to take our dough to be baked on the hearth. Was ever such sweet bread baked elsewhere ? I should like to get some of the same kind now, instead of the ‘germless’ stuff so popular with the thoughtless at present.

Before passing from South-street, what of ‘Weaver Pool’ ? On that dirty water I have had lots of fun when the ice would bear, and in it when it would not ! I recall one incident in connection with this pool. Having a lad named Hithersay on my back, I backed up to the side of the water to give him a fright, and succeeded so well that he went headlong into the water. I got him out, squared him, took him to his mother, explaining that her son had fallen into the water, and that I had got him out ! The mother was proud of me, and never knew I was at fault; but that lad — well, he was ever afterwards my master. Shortly after I was driving a horse and cart, and he wanted to ride. I whipped him off, when he cried out, ‘If you don’t let me ride, I’ll tell my mother.’I let him ride. ‘Conscience makes cowards of us all’.

The grandest improvement of all was the opening of the Erewash Valley railway, which has much to do with Ilkeston’s advancement. Whilst this line was being made, a navvy paid a visit to Jerry Wigley’s Inn, where he boasted that he could thrash any man in the town. A lace hand, Jack Pepper by name, if I mistake not, accepted the challenge, and I witnessed the fight, which I must say I enjoyed, as I did others in Woodroffe’s close, and in the fields leading to the hilly-holey pasture. Well the navvy got ‘pepper’ with a vengeance, but not until there had been a very hard struggle. Ilkeston was proud of Pepper that night, for the Ilkestonian was a quiet fellow enough as a rule.

Question 21. Who was the ‘baby Sudbury‘, younger brother of Samuel, destined to be Mayor of Ilkeston ?

Question 22. Who was John Cartwright’s ‘dear old father’ and how would he gain such free access to Hobson’s Mill ?

Question 23. In Letter 2 ‘Kensington‘ stated that when Hobson’s mill was moved, it was replaced by ‘Monkey Park’ and Regent Street. John Cartwright disputes this and suggests that something else was built on the site. What was the name of this ‘something else’ ?

Question 24. Who kept the other old house and the public bakehouse in the next block to Thomas Tomlinson in South Street.

Question 26. In what year was the Erewash Valley line through Ilkeston opened ?

Question 27. What was the name of Jerry Wigley’s Inn ?

I hope we shall have a few lines from those whose names he has mentioned I am much afraid there are not many of us left. There was a Mark Parkinson* and three of Sydney Adcock’s lads**; I often wonder what part of the world they are in.
I was in Leeds some time ago, and overheard some men talking about perpetual motion, and one man said he had discussed the question a many years ago with a James Bell, blacksmith, of Ilkeston. I remember this man very well; he was a fine-built man. I used to see him at work in his shop when going down their yard to Mrs. Straw’s school. This was before there was Cragg and Milner, both of them peg-legs; we used to call them. Herbert Tatham and his sister went to the same school.

… Mr. George Small .. was the parish constable He once had an assistant named Horsley, and one time a man had misbehaved himself at Mr. Hives …. Horsley was sent for to remove or apprehend him, but the man would not go with Horsley; he said he would not be taken by a deputy. Mr. Small was fetched and the man went quietly with him.

Question 28. *Mark Parkinson was baptised Christopher Markham Parkinson in 1833 at St. Mary’s Church, the last of the ten children of William and Mary (nee James). The mother and father died in 1837 and 1838 respectively, leaving the children living with their grandmother Elizabeth James in the Lower Market Place. What was the occupation of Mark’s father ?

Question 29. **Sydney Adcock was probably also known as John, a framework knitter living in Bath Street with his wife and many children. What ‘pastime’ was he noted (notorious) for ?

Question 30. Remember that as a lad ‘Enquirer‘ lived in Kensington, where resided also the Tathams. He could well have walked to school with Herbert Tatham and his sister, up Nottingham Road to White Lion Square, past Bell’s blacksmith workshop and on to Mrs. Straw’s dame school. And where was that ?

Question 31. Blacksmith ‘James‘ Bell was most likely misremembered by Enquirer. He was William Bell … but what else did he do to earn a living, and where did he do it ?

Question 32. George Small’s assistant was framework knitter Thomas Horsley whose son Joseph was initially a lacemaker … but in Ilkeston what were both renowned for ?

Question 33. What were the premises of Mr. Hives called ?

Question 34. Where did George Small have his seed and vegetable shop ?

[And another Bonus Question. You now have more clues about the identity of ‘O.P.Q’ … are you any the wiser ?]

First we had Enquirer, then Kensington, and then John Cartwright. Now another correspondent joined the conversation … he was Bath Street, and in this letter he introduces many more characters into the cast of Ilkeston 50 years ago.
He mentions several of his contemporaries, suggesting that he is possibly a decade older than the other writers, (and so may be discussing Ilkeston 60 years ago !!)

I should like to add a ‘few links to the historic chain’. It seems but yesterday since I recollect going ‘up town’ for the first time with my father, and yet it was in 1838, and the bells, the merry bells of old Il’son, were ringing a joyous peal in honour of the coronation of our most gracious Queen. Mr. Skeavington’s farmhouse and yard stood in the centre of the present Market-place; Mr. Frost‘s house was not quite finished. Mr. Skeavington was the first occupier after its completion, and then the farmhouse and buildings were pulled down.
Mr. H(enry) Sills, baker, lived in a large house where Mr. Bourne now lives; and lower down, Mr. T(homas) Harrison had the chemist and druggist’s shop now occupied by Mr. Merry.
Mr. Hobson sold groceries where the Liberal Club now stands, and Mr. W. Bennett* was ‘mine host’ at the Old Harrow Inn.
I recollect the last Maypole. It stood in the centre of the old Market Place, in front of the Butter Market …
I first went to school to Mrs. Wilson, whose son Joseph built Wilson-place in after years. She was a dear old dame and all her scholars loved her exceedingly. When I was older I went to the more famous seminary in Albion-place, presided over by Mrs. Barker, wife of ‘Worcester’ Barker. … Afterwards I was transferred to dear old Mr. Crossley, who kept school in an upper room in Pimlico, over where the late Mr. Abraham Mitchell lived.

Another famous home for learning down Bath-street was presided over by the renowned Mr. W. Pitt, familiarly known as ‘Billy’. He was an expert calligraphist, an ardent politician, and had a ready wit.

Question 35. Mr. (William) Skeavington moved out of his Market Place farm to be the first occupant of his new house; where was this ?

Question 36. What was the occupation of its later occupant, Mr Frost ?

Question 37. In 1891 Charles Henry Bourne lived next door to the inn of his late father-in-law. Who was his wife ?

Question 38. And what now stands where the Liberal Club once stood ?

Question 39. Apart from the use suggested by its name, can you name one other use of the Butter Market building ?

Question 40. ‘Billy’ Pitt had suffered ‘electrification and galvanisation’ without success. But what did work for him ?

* I believe that it was Thomas Bennett who kept the Old Harrow Inn.

And finally your ‘picture starter for 10’ …

What connects the following picture with Mark Parkinson ? 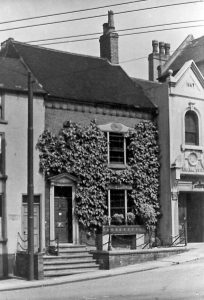 John Cartwright
We will come back to John later.

Bath Street
We get few clues as to his identity but he may have been a few years older than the others.

and then there is O.P.Q.
His father’s surname (and presumably his surname) was Fletcher, a well-known local Wesleyan preacher