And following on from Part 2 …. at the end of November 1891, letter 7 arrived at the Pioneer. This was from ‘Pilgrim’,  a resident of Eastwood, and told of his recollections of that town.

Letter 8
A week later, a second letter from John Cartwright was printed. John corrected Enquirer's recollection of blackmith Bell of White Lion Square (see Question 31) ... it was William not Thomas, he being 'a capital workman and a fine fellow, and he had a lot of fine daughters'. Situated between (the White Lion Inn) and (the Travellers' Rest)was a house wherein resided 50 years since, a Mr. Goddard who had served his King and his country for some years, and well to I recall his form to mind. I was pleased to read the interesting notes on the village of Cossall .. which .. reminded me of the time when Charlie Fritchley attended school at Ilkeston. A fine fellow was he, and one we youngsters took care not to offend. He was cousin to the Fritchleys of Ilkeston, of whom Mr. Thos. Fritchley is the only one I should now remember. (The rest of John's letter then listed a host of Ilkeston families from Gallows Inn area to the Common, but with little detail, and a section on Eastwood) Question 41. Three of blacksmith Bell's fine daughters were Sarah Ann, Priscilla and Phoebe. What did their husbands (George Wright, Isaac Parkin and Henry Knighton, respectively) have in common ? Question 42. Who was the Goddard of White Lion Square and in which Regiment had he served ? Question 43. Charlie Fritchley was the son of Cossall farmer Richard (who had developed property in South Street) and his third wife Hannah (nee Wheatley). Who was the patriarch of the 'Ilkeston Fritchley's' (Richard's younger brother) ? Question 44. How were the Ilkeston Fritchleys united with the Cossall Fritchleys in 1869 ?

Letter 9 was a general ‘thank you’ to the Pioneer’s editor from John Marlow, a medical herbalist in Basford, while Letters 10 and 11 were from Pilgrim about his life in Eastwood).

Letter 12
This letter, another one from Enquirer, brought us back to Ilkeston. I was pleased to see Bath-street's remarks about the cross dressings. I often wonder what has become of the stone the Maypole was fixed in. Allow me to remind Kensington that there used to be an amateur cross dressing at Kensington Row by a boy, George Fern, which was done up very effective, and I have seen ladies and gentlemen reward him with silver and coppers ...  Does Kensington remember an old couple named Williams that lived in Kensington Row. The man was a great swearer. My father used to go and sit with them on winter evenings, and knew his habits. One night my father laid a trail of gunpowder from the clock across the floor and under the door. Just as the old man Williams was drawing up the clock my father let off the powder. The old man was very frightened, and said he had seen the devil in a flash of fire. It cured him of swearing for a time. Before I conclude this letter allow me to remind Bath-street of good old eccentric John Watkinson, of Cotmanhay, and allow me to take a pinch of snuff with him. He once made use of these words, and I shall never forget them -- 'This world's only a kennel for the devil'. Question 45. Where was the Maypole ? Question 46. What was the occupation of 'old man Williams' of Kensington Row ? Question 47. What was the familial connection between 'boy George' Fern and old man Williams ? (This is a tricky one and so deserves two marks for a correct answer !!) Question 48. How might a blind person be aware of the presence of John Watkinson ?
Letter 13
This came from John Cartwright I suppose (Enquirer) ... remembers the old mulberry tree by Ilkeston Church, and whose branches hung over the wall by the walk round the Rutland Cricket Ground. .... Thee noble row of poplars on one side, and St. Mary's Church on the opposite side.... rendered Ilkeston Cricket Ground one of the prettiest in England .. How often have those well-known poplars partially sheltered we youngsters from the rays of the mid-summer sun when lounging on the turf after a game of 'bat and ball' in order to watch Paxton and Morris and Leivers, or the Attenboroughs and the Potters, and others practice the art they so much loved, and of which some of them were such clever exponents. (I) call to mind those ... whose lives date back ... for 50 or more years: amongst them of Mr. Hunt, tailor and barber (to whom I went for a shave before I was 16): of Mr. John Wombell, who 'pioneered' the Pioneer: of Mr. John Childs, whom I last saw and chatted with at Blackpool, when he was over 80, and hale and hearty: of the Mitchells, Mr. Fred in particular: of the Wests, of fiddling renown; of Mrs. Marshall, the grocer (next to mine host, William Woodroffe), and son Tom; ... of Mr. Mark Attenborough and his kind and good wife, who were model hotel keepers .... and whose eldest daughter's marriage with Mr. Joseph Carrier I remember as if it were but yesterday; of Warners, the builders, and Burgins, the blacksmiths;... of Johnson, the joiner, whose sons Amos and David were schoolmates Question 49. What was the official position held for many years by John Paxton ? Question 50. Name the two cricketing Attenborough brothers. Question 51. What did they have in common with their eldest brother ? Question 52. What was the name of the Potter residence at this time ? Question 53. Where did William Hunt trade as tailor, barber and hairdresser ? Question 54. John Cartwright wrote this letter on December 15th 1891; why would he no longer meet John Childs in Blackpool, or anywhere else ? Question 55. The letter mentions several prominent Ilkeston trading families ... can you pick out the two drapers ? Question 56. Amos and David Johnson were sons of James; what was the latter's 'nick-name' ?
Letter 14
This was a short one from Enquirer, the first one  of 1892. Has (John Cartwright) forgotten who was Postmaster before the penny postage was established ? A very worthy old shoemaker, Paul Walker. Also there was a ladies' seminary below the Toll Bar on the Nottingham-road kept by a Miss Padman. I notice that two names of old school fellows Mr. Cartwright has omitted are still alive -- Man Barker and Chilles Brown -- and no doubt there are others ... Question 57. When Paul Walker died in March 1851, who took over as Ilkeston's postmaster ? Question 58. What was the position held by Miss Eleanor Padman's father, Thomas ? Question 59. What was the family connection of Man Barker and Chilles Brown ? Question 60. In which Ilkeston street was Chilles born, lived most of his 72 years of life, and died there, at Number 62 ?

And now your picture question …. 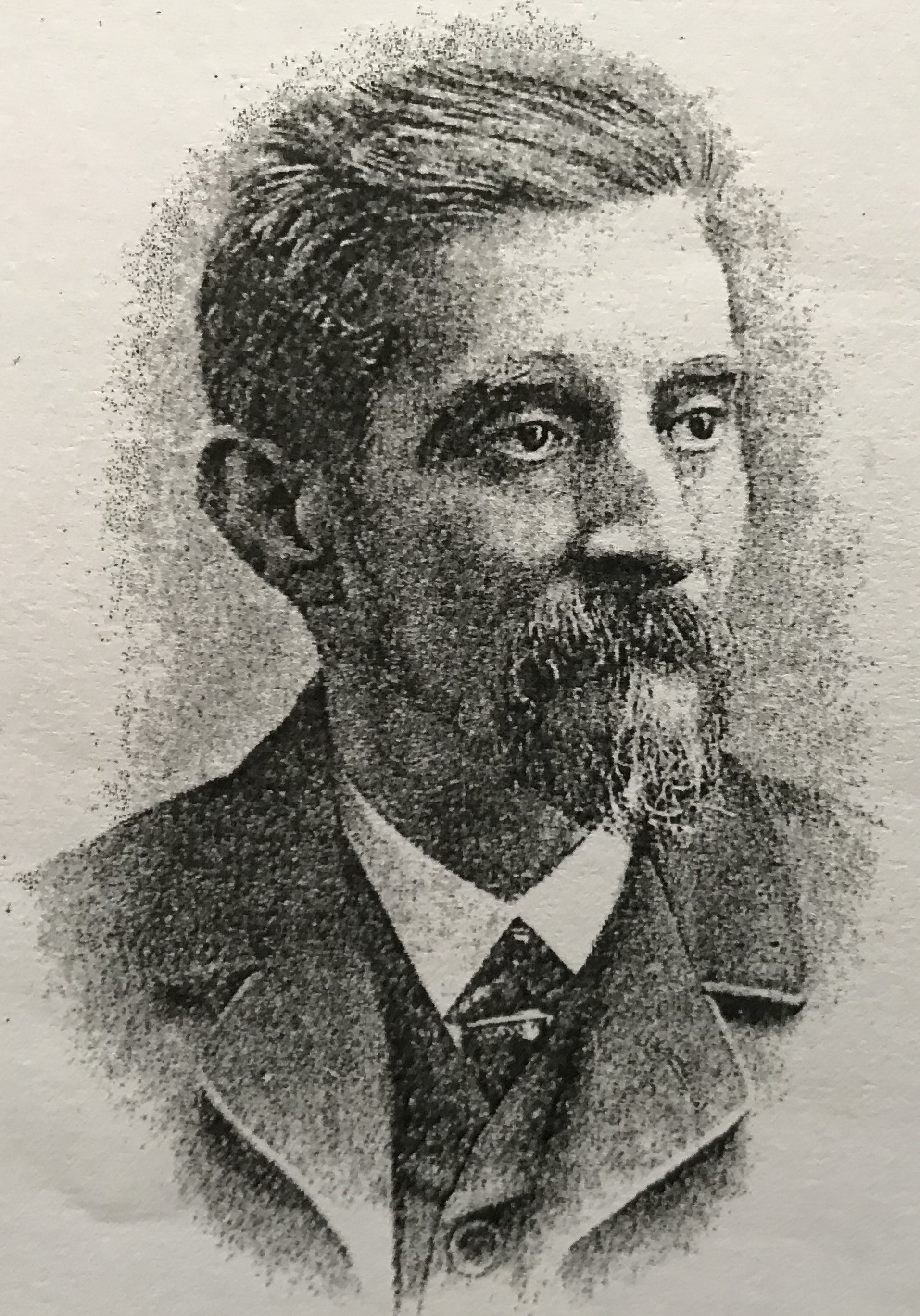 This is Charles Potts, born on April 18th 1842, at Hockley in Nottingham, and later chemist and druggist of Bath Street. What (occupationally) did he have in common with Paul Walker, the ‘worthy old shoemaker‘ of the Market Place ?

Although Pilgrim has joined the ‘writers’ circle’, I will (at least for the time being) overlook him as he is a resident of Eastwood in Nottinghamshire.