Having dutifully and thoroughly read the Grand Tour, and memorised all its details, you are now in a position to attempt the fiendishly difficult ‘Old Ilson Quiz’.
However, I suspect that most of you will have skipped much of the detail and concentrated only on those parts of the tour which affect your family history. In which case you can always cheat !!
Or don’t bother with this Quiz at all.

We will start by examining Ilkeston’s vibrant social media of 1891 … namely the correspondence pages of the Ilkeston Pioneer.
(I have numbered and clipped all the following letters, but have tried to avoid altering them in any other way).

In November of 1891 a letter appeared in the Pioneer. It was headed ‘Ilkeston 50 years ago’ and was signed by an old Ilkestonian, ‘Enquirer‘.

It is a many years since I had the pleasure of visiting my native place, and no doubt there are a many alterations since I was there. I have had sent me a photograph of a house at Hunger-hill where my grandfather and grandmother lived, and where my mother was born. They are all gone, but their memory is still sweet to me.
I wish some one able to do so would give us a brief history of the town …  before there was a railway, gas, water, or police.

I often wonder if there were any young bloods left called ‘Stapleford light horse*’, that used to come to Ilkeston and do so much mischief on a good Sunday night.

I expect the old bellman, Jonathan Bostock (‘Derby Trotter’) has gone to his long home. It must be nearly 50 years since he walked to Derby and back three times in one day. I can remember going down Cordon’s-lane, as it was then called, to meet him coming in the last time.

* Stapleford was not the only local town/village to have its ‘regiment’ of ‘light horse’, a gang of rascals/pranksters/drunkards/yobs, intent upon causing mayhem and mischief.

Question 1. (a very easy one to start you off .. unless you find Maths too challenging to bother with). What year, approximately, is Enquirer enquiring about ? (I will allow you five years either way !!).

Question 2. In what year did Jonathan ‘Jonty‘ Bostock yo-yo to and from Derby ?

Question 3. Where was Cordon’s Lane, and what other name was it known by, when Jonty returned up it from Derby ?

Question 4. Any idea who ‘Enquirer’ was ? (a yes or no answer which you are bound to get correct)

A short time after ‘Enquirer’s‘ letter, ‘Kensington‘ replied, describing what changes had occurred in these 50 years …

‘You were born at Hungar Hill … I was born in the near, but more aristocratic, neighbourhood of Kensington.

Let us start .. from Hungar Hill. We shall not see much alteration on this side of the town. Tatham’s have extended their borders; the roads and pavements have been improved here, as well as in Bath-street.

Opposite the White Cow we have a new set of Board Schools.

Old Joe Siddon’s ‘Lodgings for travellers’ has disappeared; and this peculiarly designed villa on its site is the residence of the Town Clerk; for Ilkeston is a borough now, you know.

You are looking for Hobson’s mill …it has been removed into Derby-road, and the field has been laid out years ago into building lots. Some irreverent wags … named it ‘Monkey Park’. The authorities have named this street Regent-street.

The tollbar has gone, but South-street remains almost as it was. … I should think you have seen Wesley Chapel, and if you went to old “O.P.Q’s Academy*“, you probably saw it built. I remember a performance of the ‘Messiah’ in this chapel, on Shrove Tuesday, 1849 — the same day that old Isaac Cocker was buried. We have a Harmonic Society here now, but it would put them on their mettle to equal the performance we had then. Henry Farmer conducted, and he was ably supported by George West, John Richardson, and an army of Goddards, Adcocks, Tilsons, Harrisons, Carriers and others.

You wish to go up the fields from the White Lion to the Market-place do you ? (That is, along what is today Market Street). Well, come along. Here is Crook’s Row, but where is Crooks’s Close ? The three fields are cut up. The old footpath has become Market-street, and Crooks’s Close, Hobson’s Haigs, and one of the prettiest little cricket grounds in England have all disappeared. The site of the cricket ground is now occupied by a large factory built by …. (Question 13)

Question 5.  What did the Tathams of Nottingham Road make ?

Question 6. What was the name of the Board Schools opposite the White Cow ?

Question 7. The White Cow is no more. What has replaced it ? (every little helps !! )

Question 8. Ilkeston formally became a borough in 1887 and who was its first Town Clerk ?

Question 9. Old Joe Siddon’s Lodging House stood on the east side of Nottingham Road, just south of Orchard Street (now the site of Littlewick Medical Centre). What was the name of the ‘peculiarly designed villa‘ which stood there in 1891… a name which still lingers in that area ?

Queston 10. Why was Hobson’s mill so-called ?

Question 11. Now we go into South Street and to the Wesleyan Chapel, which stood on the site of what is now the ‘jobcentreplus’ premises. This was the chapel connected with ‘O.P.Q’ (as we shall soon see). But opposite was Baptist Chapel Yard, where another ‘master’ had his Academy … who was he ?

Question 12. Where would you find Isaac Cocker and many of his relatives today ?

Question 13. The large Market Street factory was built by whom ?

We have got into the Market-place. It looks more respectable than it did 50 years ago. The old tumble down church was restored about 35 years since, and the (grave) yard was extended, taking in a piece of waste ground where rubbish used to be deposited. Wasn’t there a row about it ? But the Vicar was one too many for his detractors, and the Market-place was improved. John Fish, an old neighbour of ours, lives here. No, he is not a school-master; the place was built for a school, but is now used for a Market Hall.

The three old, thatched, whitewashed cottages have given place to a Town Hall.

You have seen a circus in old Woodroffe’s Close. You’ll not see another. That and the adjoining fields have been laid out for villa residences, and form the Belgravia of Ilkeston, with its St. Mary’s-street and Jackson-avenue — named, it is said after Stonewall Jackson, who is claimed by some of the former owners as a descendant of the Ilkeston Jacksons.
The Old Harrow still stands to block the entrance to the Market-place from Bath-street, but all the old cottages are gone. … and .. the other funny old cottages stuck on the hill-side, and approached from the street by steps or sloping paths; the gardens, the fields, have all gone, and given place to shops, shops, and shops.

You see we have made a start at widening the streets at the bottom of Bath-street; it looks different to what it did when the tramway ran across the road, bringing coals from ‘Boswell’ to Potter’s Wharf, and the drain from the Manor House was open close to Mrs. Dodd’s door, somewhere about the Bath-street Post Office now is.

Question 14. What school stood in the Market Place before it became the Market Hall and home to John Fish ? (Please be precise or you won’t get a mark !!)

Question 15. The name, please, of one (… only one ..) resident of any of the three ‘old, thatched, whitewashed cottages‘, which were pulled down to make way for the Town Hall.

Question 16. Woodroffe’s Close got its name from William Woodroffe; what was his profession in ‘Ilkeston 50 years ago’ and in what premises did he ply his trade ? (Only half a mark for each part !!)

Question 17. Which family lived at the Manor House in ‘Ilkeston 50 years ago’ ?

A few days later, ‘Enquirer‘ penned a reply to ‘Kensington‘. He clarified that he was not born in Hungar Hill but had lived in Kensington, and continued …

.. it is very likely that you and I may have gone together to … Marshall’s bakehouse for a new loaf.

I could at one time of day name every field and every family from Gallows Inn to Cotmanhay, and in what orchard the best apples grew. There used to be some nice little fruit Little Hallam way. On one occasion, when robbing an orchard, there was an alarm and a stampede. The last boy to get through the hedge got a little assistance, and, like a locomotive, he had a ‘tender behind’ for a few days. That boy afterwards used to make enquiries what sort of boots the farmers wore before he went robbing orchards again. If they wore big boots he didn’t go.

I am much obliged to you for the invitation to go to church with you, but living in a seaport on the east coast, 80 miles away, I cannot accept …

What has become of the family of Gamble that used to live below the Toll Bar ?  I went to school with two of the boys and once I remember floating about on ice on a pond that used to be in South-street, where Sudbury’s built a grocer’s shop, near where Birch’s joiner’s shop used to be.

Question 18.  Where did William Marshall have his bakehouse in ‘Ilkeston 50 years ago ? (Be careful – he did move around !!)

Question 20. What was the name of the skating pond on South Street ?

Finally your ‘music starter  for 10’ …
What musical instrument was Jonty Trot inextricably linked with ?

And finally finally, your picture starter, to continue the Quiz….
Who is this ?  (Clue: In his later life he lived in a ‘Hall’ very close to where Ilkeston’s empty tomb now stands.) 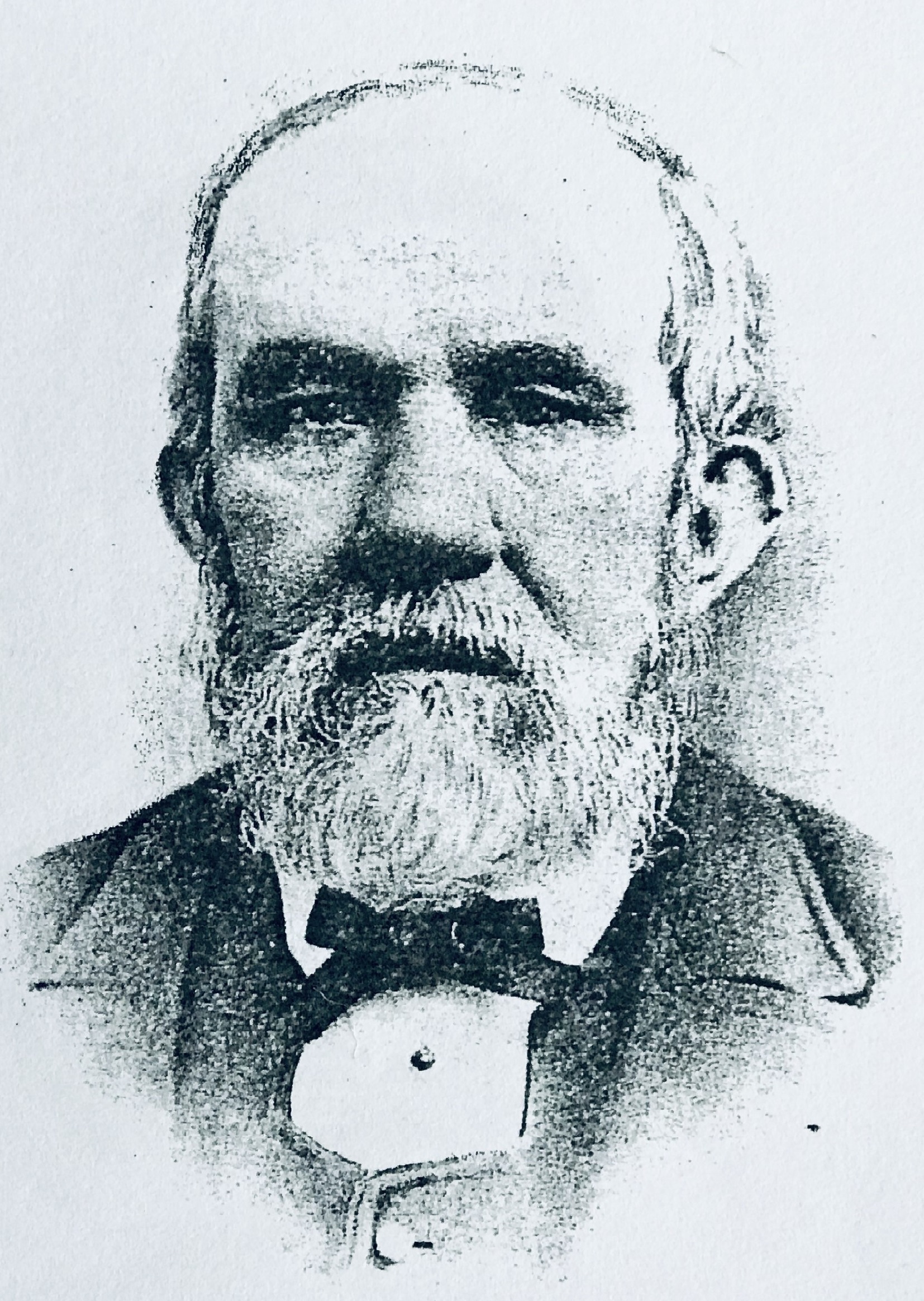 These first three letters have introduced us to several characters, hiding under pseudonyms. But who were they ??

Enquirer
Enquirer was the first to post a letter in our ‘Old Ilson Quiz’ section and he gives us some clues, in his first letter, of his identity.
He has been away from Ilkeston ‘for many years’ but his (maternal) grandparents were born in Hunger-hill and his mother was also born there … all three are dead by 1891.
In his second letter he makes clear that he himself was not born in Hunger-hill, and that he now lives 8o miles from the town, in a seaport on the east coast of England. From the names of his school mates, he would appear to have been born in the early 1830’s ?

Kensington
Kensington offers the first reply to Enquirer.
He was born in Kensington district.

O.P.Q.
O.P.Q. is mentioned by Kensington as being the master of an Academy perhaps within sight of the South Street Wesleyan Chapel, and there at the time that the chapel was built (1845).