After Part 6, let us recap on what we know of the identities of the letter-writers ….

Enquirer
Enquirer was the first to post a letter in our ‘Old Ilson Quiz’ section and he gives us some clues, in his first letter, of his identity.
He has been away from Ilkeston ‘for many years’ but his (maternal) grandparents were born in Hunger-hill and his mother was also born there … all three are dead by 1891.
In his second letter he makes clear that he himself was not born in Hunger-hill, and that he now lives 8o miles from the town, in a seaport on the east coast of England. From the names of his school mates, he would appear to have been born in the early 1830’s ?

Kensington
Kensington offers the first reply to Enquirer. He was born in Kensington district.

O.P.Q.
O.P.Q. is mentioned by Kensington as being the master of an Academy perhaps within sight of the South Street Wesleyan Chapel, and there at the time that the chapel was built (1845). His father’s surname (and presumably his surname) was Fletcher, a well-known local Wesleyan preacher

Bath Street
From his letters Bath Street seems to confirm that he is older than the other correspondents. And his knowledge of the residents of Bath Street together with his nom-de-plume seem to reveal his domestic location.

Pilgrim
Although Pilgrim has joined the ‘writers’ circle’, he is a resident of Eastwood in Nottinghamshire.

Letter 25
This was composed by Enquirer. He described a recent visit back to his 'native town' of Ilkeston, and to the church of St. Mary's where he 'was christened and later married'. Speaking of marriage, my wife reminds me that come the 4th of May, it is 36 years since we were married. Tempus fugit.  He then travelled around the town, meeting old friends and visiting 'several Inns' which 'appeared .. to be well conducted .... I saw many old friends, whose features bore evidence of the hand of time. On making the remark, I was reminded that it was so in my case .. Speaking of changes, I remember two young gentlemen (that were then) -- Mr. Woolstan Marshall and Mr. Ezekiel Bailey -- went to the first Exhibition in London in 1851. On arrival in London they went to a shop to get a cigar. It so happened that each put down half-a-crown. Not receiving any change, they made bold to ask for it. But the young lady who waited upon them politely informed them that "Times changed, faces changed, and all things changed, but they'd get no change from her". Question 121. Before his marriage in 1859, Woolstan Marshall had a shop in the Market Place. What did he sell ? Question 122. Who purchased his property in 1867 when  he moved out ? Question 123. The Local Board appointed Woolstan to what position in 1876 ? Question 124. Where did he die, in 1878 ? .... Question 125. ... and what was the cause of his death ? Question 126. Before leaving Ilkeston,  Ezekiel Bailey worked with his father Joseph .... making what ? Question 127. Where was the Bailey factory ? Question 128. It was the second in a series of large factories built in Ilkeston; what was the first one ? I think I told you in one of my previous letters that my first 'schoolmaster' was a woman. Good old Mrs. Straw, of blessed memory. Well, I had great pleasure in meeting with her son, Mr. Norman Straw, who used to officiate sometimes (to my sorrow) during his mother's absence. I remember once being caned by him severely.... I forgave him .. I drank his health. I reminded him of another circumstance also. One cold winter's morning I had forgotten my gloves. Thinking about them I marched into the school with my cap on. I was quickly asked, "Where are your manners ?" I at once replied, "I have left them on the mantlepiece at home". After this I was teased as the boy who had  left his manners at home. Question 129. Who was 'old Mrs. Straw' Question 130. ..... and who was her husband ? Question 131. Where in Ilkeston did Norman Straw live most of his life ? Question 132. And for most of his life he traded as a tailor .. but on the 1881 census he is described as a barman. Who was his employer then ?

Letter 26
I knew a great many 'men of straw' in Ilkeston, but I do not recollect the 'good old Mrs. Straw' and her son Norman. The two names, 'Norman' and 'Straw', call up many memories, amongst them Mrs. Kitty Straw, of Little Hallam-lane (Stanton-road now), was nurse to Mrs. Norman, the kind doctor's good lady. How well I remember old Mr. William Straw and his good wife Kitty; also their nice cottage and their pretty garden, wherein grew a gooseberry bush as high as an apple tree. That pretty garden has long since been spoiled by the builders, who cannot add to the beauty of a place, however much they desire to do so. Question 133. Like many of the male Straws of Stanton Road, what did 'old Mr William Straw' do for a  living ? The next part of this letter recalled features of John's early family life, and then found him, riding around  Eastwood and its environs, meeting locals, and recording the date when he and his family left for Ilkeston ... June 15th 1841, 'a lovely summer day' ... and just over a week after the 1841 Census had been taken. Question 134. How old was John when he first arrived in Ilkeston ? Names and faces and figures still keep cropping up in connection with old Ilkestonians. Little Hallam reminds me of Mr. Gilbert Bailey, whose form I well call to mind, also Mr. John Taylor (a relative of the Cockers), who now resides between here (i.e. Derby) and Borrowash I believe. I suppose our old friend, in addition to the churchyard, would also look into the cemetery, which took in a portion of "Hobson's Closes", where a birdnesting we used to go. One 'very great friend of mine' as 'Little Lord Faultleroy' would say, was Mr. Abraham Aldred, who lived and died in England's-row, South-street. During his long illness (consumption) he and I had many a game together, 'cob-nuts'* amongst them, and when the end came, and they put him into his 'nice coffin', I remember going upstairs, alone, to see him once more, so much did I like the poor fellow. He was a brother of Mr. Aaron Aldred, of the Queen's Head Inn, and of Mr. Joseph Aldred, of Kensington, if I mistake not. *Cobnut was a game like conkers; the winning nut was the cob. Alternatively, several piles of nuts were formed and with your "cob'', or largest nut, you tried to knock them down. Question 135. Gilbert Bailey was a cousin of Joseph Bailey (see Question 125). John Cartwright places him at 'Little Hallam' ... can you place him more precisely, in Ilkeston ? Question 136. Who were the parents of John Taylor ? Question 137. And where did he reside in July 1892, when  John Cartwright wrote his letter ? Question 138. In what year did the new cemetery in Ilkeston "take in a portion of Hobson's Closes" ? Question 139. If Abraham Aldred was the brother of Aaron Aldred of the Queen's Head Inn and Joseph, lacemaker of Kensington, who were his parents ? (Abraham died on November  7th 1844, aged 28).

It was almost two weeks before Enquirer replied with a brief note, aka Letter 27.

Letter 27
The following extract from the London Times may interest some of your old readers:-- In Memoriam. Lord Byron died in a glorious cause April 19th 1824, the young , the beautiful, the brave, at Messolonghi, Greece. "It was as if the sun had gone out of Heaven," wrote Sir Walter Scott. I wonder how many Ilkestonians know that Byron's valet lived and died on Ilkeston Common (Mr. Richard Whitehead). I remember seeing him when a boy. Poor Byron. Question 140. Is Enquirer confusing 'Mr. Whitehead of Ilkeston Common' with someone else ?

And finally, another pictorial question based on this map c1880. Who built the lace factory shown here ? 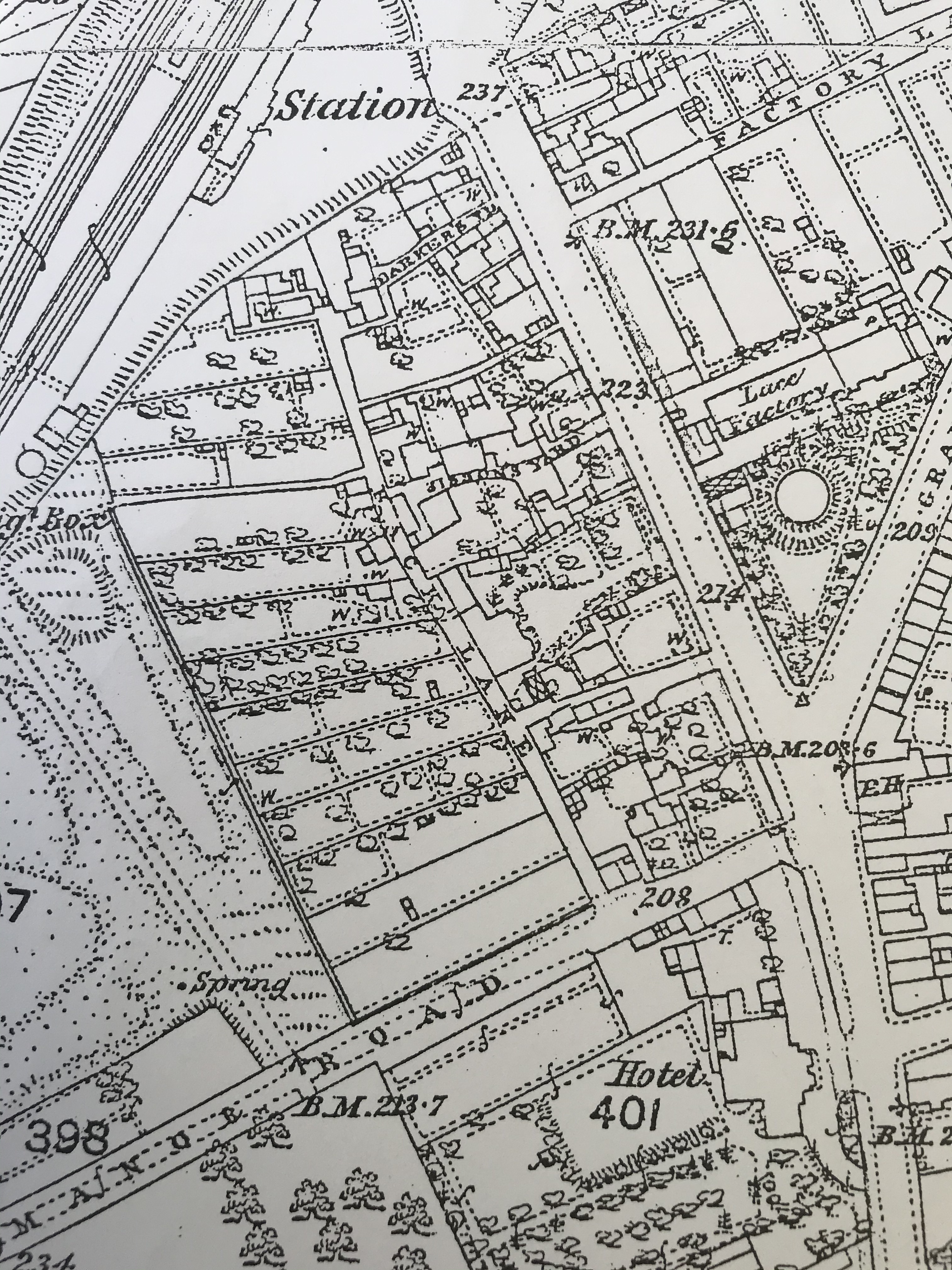 Now, with the application of a little maths and some simple searching on this website, you should be able to identify who Enquirer was. (Assuming his memories are accurate).