On September 5th 1892, William Strangeway wrote from Crosby Street in Derby. He spent the first half of his letter (No 33) praising the writing style of John Cartwright and then the beauty found in the Erewash Valley. It ended with another wish for a reunion. The following letter (No 34) from Enquirer supported the wish.

Letter 35 from John Cartwright came back, dated October 10th, in which he writes about Eastwood but comes back to Ilkeston.

I am reminded of other old Wesleyans who were well-known 50 years ago — amongst them, Mr. Benjamin Fletcher (“Old Ben”) of High-lane, a man who belonged to the strict or severe order, and whose familiar stick was a terror to young evil-doers; Mr. John Hallam, farmer, of Kirk Hallam, a sincere and ardent, if somewhat singular member of the great Wesley ccommunity; and genial, cheerful, and kind-hearted James Butt, whose name I have before mentioned, and who is still a much respected resident of your borough. When I was some eleven of twelve years of age, Mr. Butt (like his good old soldier father before him) was my Sunday school teacher, and I remember one Sunday in particular feelong well satisfied with myself, not on account of having performed well at my lessons, but because a new pair of boots I had on — agrand pair made by that best of boot builders, the late Mr. Thos. Tomlinson — looked to me almost as big as my teacher’s boots !

Question 163. Where did Thomas Tomlinson have his ‘boot shop’ ?

I was pleased to read a paragraph in the Pioneer of Sept. 23rd, referring to the golden wedding of Mr. and Mrs. Brentnall, whose name reminded me of a lady I well knew in Burr-lane over 40 years ago, who was the mother of Mrs. John Childs and Mrs. James Chadwick, and whose son (Frederick?) settled, I think, in Manchester. I wondered whether the favoured couple were related to the Burr-lane lady.

Question 164. Who was the Brentnall lady of Burr Lane ? (Be careful !)

Question 166. Where did her husband have his shop ?

Question 171. Frederick Samuel Brentnall was the youngest of this family. Did he settle in Manchester ?

Letter 36, from Inquirer (sic) was written on New Year’s Day, wishing Happy New Year to his Old Ilkeston mates, and suggesting an Easter reunion. Which brings us to Letter 37 .. another one from John Cartwright, dated May 5th 1893.

I visited your good old town in November, just after you had elected my old friend — Mr. Ald. Wm. Merry, to be your chief magistrate for the current year. I beg to congratulate the new borough on having secured so worthy a Mayor.
Starting from the Great Northern Station, I passed the old Poplar Tavern, against which the stump of an old poplar tree still stands; nearly opposite was Twells’ old shop, but no sign could I see of Moses and the bulrushes — no, the rush-lights. Where is Moses now the light is out ? Rising higher, and just before reaching Mr. Aaron Aldred’s old quarters, the Queen’s Head Inn, I at last missed those two old houses that had so long disgraced Bath-street, which eyesore had been a source of much annoyance to me quite 50 years since. When I was a lad I did wish that Oliver Cromwell had bombarded them instead of some of the fine old castles ! Higher still, I reach my last school — the British — in which I  passed some pleasant hours. Opposite the schools, a well-known man — Jack Lee we rebels called him — long resided, and not far away lived the Fritchley family.. ; whilst father up the street, inn the yard opposite Carrier’s block of buildings, lived one Jack Foster, the bellman, at one time, if I mistake not.

Question 172. In what year had Ilkeston become a borough ?

Question 174. Why did John refer to the ‘rush-lights‘ here ?

Question 175. What distinguished the British Schools in Bath Street from the National Schools in the Market Place ?

Question 176. Jack Lee was so well-known that he had a yard named after him … what is its name today ?

Question 177. And what was the name of the yard on the opposite side of Bath Street, where Jack Foster lived ?

East-street called to mind the Bennetts, Collumbells, Goddards, Meakins, and Tomason, the horse-breaker. Fancy carried me to the neighbourhood of Lee’s orchard, through the twitchel past Dr. Norman’s, and on to the fields called ‘hilly-holeys’ which are now converted from their old state of play-grounds into a resting place for the dead….. Anchor-row, the Market-place, and Pimlico are glanced at, the Market-tavern recalling the familiar figure of the genial landlord, Mr. Jedh. Wigley, and also those of his handsome daughters; the King’s Head calls forth Mr. William Woodroffe, and his good wife,

Pimlico calls up the Turtons, one of whom was a fine soldier lad. Lawn Gardens reminds me of the Small family, which was large, and several of whose members are still in our midst. Top of South-street is reached just after passing the residence of the much esteemed and venerable Mr. John Mellor …. As I pass the old spot, I see again barber Hunt, and some of his apprentices, amongst them, Joshua Bates, E. Higgitt, and, I think, Jas. Turton, for Mr. Hunt was a tailor too.

Turning into Queen-street I get as far as Sanders’ orchard, the trees in which, to look at, might be the same as grew in it 50 years ago ..  I reach the site of the old toll-bar … and then passed along to the Nottingham-road, thinking of, amongst others, Mr. Wakefield, the baker, Mr. Alec Cordon and his brothers, also of that model innkeeper and his wife Mr. and Mrs. Wilson, and their artist son, not forgetting either, the tuneful notes of their cuckoo-clock.

Arriving by the residence of the late Mrs. Lowe, I pass through “Hobson’s closes” …. and on my way back to  the town I met an old friend, Mr. E. Higgitt, who turned back with me, we two walking and talking together as was our want when we were Sunday School teachers together.

Question 179. What is the ‘resting place for the dead’ referred to here ?

Question 180. Who was the good wife of William Woodroffe ?

Question 181. What was the trade of John Mellor ?

Question 183. Where in Ilkeston did barber Hunt live before his move into East Street ?

Question 184. After moving from Moors Bridge Lane, where did the Sanders family live ?

Question 186. What was/is the name of the house in Nottingham Road where they lived .. it’s still there ?

Question 189. What house was built in Hobson’s Closes for Matthew Hobson and his wife ? 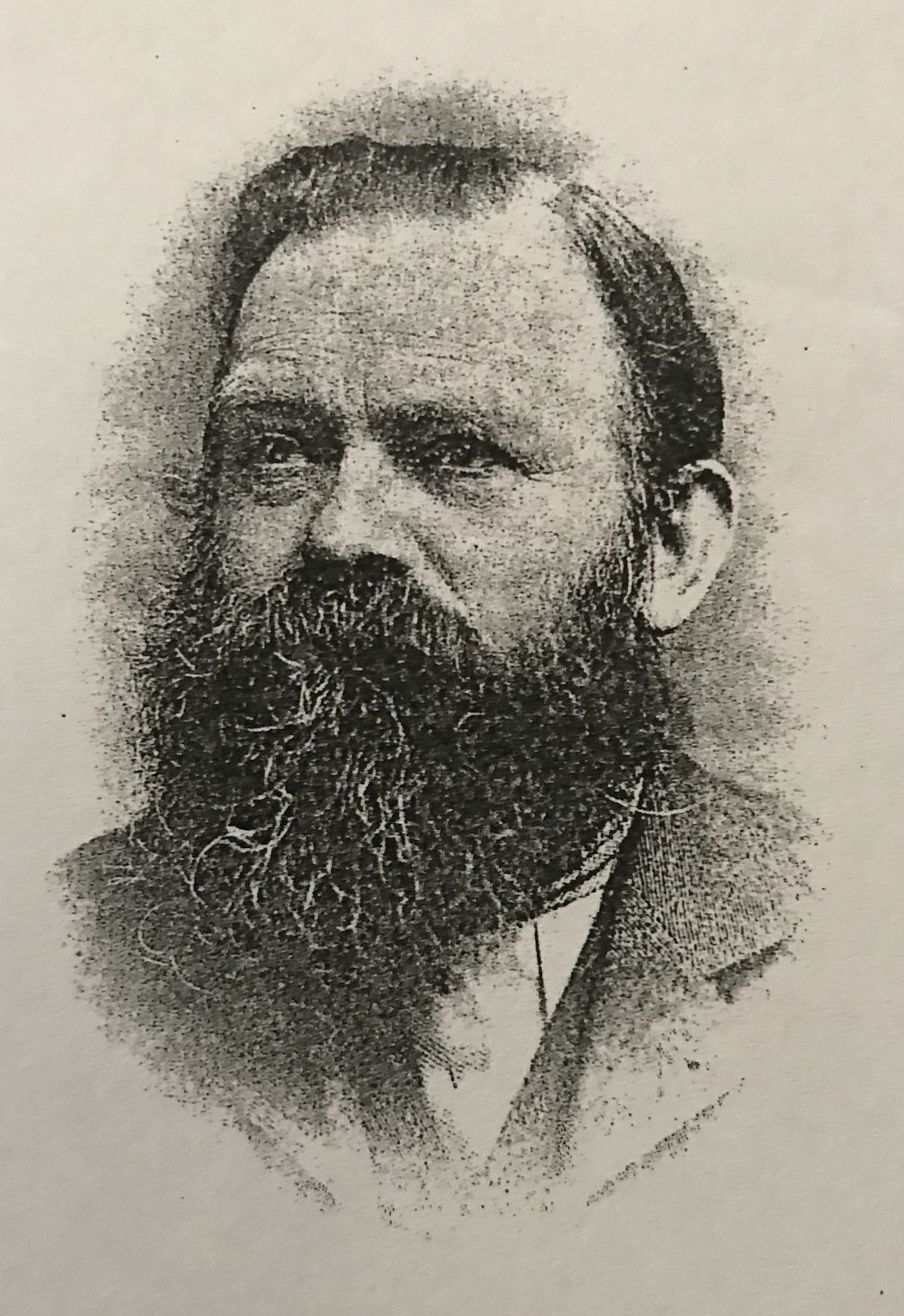 And here is your picture question.

This is a portrait of Samuel Richards (1828-1901) who for nearly all his working life was a grocer in Cotmanhay. He was the older surviving son of Samuel and Mary (nee Bostock).

Like his father, Samuel junior started work in the coal trade, but, aged 22, he had a serious accident while sinking a pit shaft and thenceforward worked in the grocery and provisions business.

Can you link him to John Mellor, nearly all his working life a butcher in South Street, and who is mentioned by John Cartwright in his letter (number 37 above) ?