Dated June 13th 1893, another letter arrived from Bullock-edge Nook in which he attempted to give more clues to his identity.

Letter 43
I was for some time assistant secretary in the Cricket Ground School to the late Mr. John Richards. I well remember the first Sunday we marched from school to the new chapel, in South-street, for service. Concerning Ebenezer, I took part in the laying by the late Rev. J(ames) Everitt (sic). I was also present at the opening services, conducted by an expelled Wesleyan minister (Re. J(ames) Youngman) and Mr. Seth Peace. When the Sunday School commenced, I was called out to teach the first Sunday, and took part in preparations for the first school sermons in eight weeks after opening, which were held on Easter Sunday (March 27th), and realised £8. I commenced as a scholar, and have been teacher; also superintendent for several years. The neighbourhood where the Sunday School was built was perhaps more neglected than any part of the town, for young men in their teens attended the (Sunday) school, and what they there learnt, along with the writing class held on Monday evenings, was all the education many of them received. This class was conducted by the late saintly Jos. Severn and John Brown. So ill-informed were some of the scholars that the superintendent said, on one occasion, they reminded him of a lad being attended by a doctor, and being told to put out his tongue. The lad gazed at the doctor, not understanding him, upon which the lad’s mother told him to open his goblet and put out his lollypop, which the doctor at once examined. In addition to my other duties in the Sunday School, I was also a member of the choir ... At the end of this letter the editor of the Pioneer indicated that arrangements for the meeting of the "Old Boys" were well in hand. Queston 211. In what year would the 'Wesleyan March' take place ? Question 212. What was James Everett accused of writing, which led to his expulsion from the Wesleyan Ministry ? Question 213. In what year were the opening services at the new Ebenezer Chapel ?

About a week later Enquirer responded with a short letter 44 .. he seemed ecstatic about the reunion, and looked forward to a joyous occasion.

Letter 45
An Old Scholar begins his letter, remembering the General Election of 1841. Mundy and Colville and Gisberne and Waterpark contested the seats. (These were Charles Robert Colville and Edward Miller Mundy (at that time both Conservatives) and Baron Waterpark  (Henry Manners Cavendish) and Matthew Gisbourne, the last two members of the Whig Party). There was a great deal more excitement in those days than there is now at some times. I well remember my mother keeping a little shop where Mr. (Tom) Blood's shop is now, on the Junction as it was called then -- now the Market-place, which was covered with some kind of burnt bind or stone. War was waged between the two parties, or their 'lambs', and they commenced throwing these missiles at each other, until they began to fly about in all directions, so that people rushed into the shop for protection, and the window and door had to be closed. I was rolling about on the counter, and fell off and broke my arm, and they were obliged to call in the assistance of Dr. Norman. A short time after this my parents removed to Derby and I was sent to a Boarding School at Mackworth, kept by a Mr. Russell, a Wesleyan. After I left school I was apprenticed, and was away from Ilkeston for a few years. I then came back, and Mr. Samuel Carrier took me into his employ. After being with him a short time, I went to Mr. Joseph Carrier, and stayed with him for 23 years. I well remember .... Old Samuel Cope, who lived on the Lawn, ... and of more modern days, -- Hannah Mellors, Mrs. Childs, John Eminson, Wheatley Straw, and several others Question 214. In what Parliamentary 'Constituency' was Ilkeston in 1841 ? Question 215. In 1893 Tom Blood's drapery shop could be found just north of the Market Tavern/Hotel, on the opposite side of the open alley, leading to the rear of the Inn. Can you speculate why this was called 'The Junction'. Question 216. What was the profession of Joseph Carrier ?

A week later another letter from John Cartwright, dated June 27th 1893, was published.

Letter 46
I have one pleasant remembrance by me of those enjoyable days, and one much prized by me, namely, an excellent Bible which was presented to me, after I left Ilkeston, for my "good conduct during the many years I was a scholar in the Wesleyan School", which testimonial was signed by Mr. Samuel Carrier and Mr. Richard Daykin, superintendents of the school. Since my last notes, I have thought of a few people whose names have been overlooked, amongst them, first and foremost, Mr. Christopher Harrison, hosiery manufacturer, who resided in a nice residence, off the West Hallam-road; Mr. Esau Hooley and his sons; Mr. S. Paling, surveyor; Mr. Bates, leather cutter, &c. (whose better -half was Miss Mellor);Mr. Robey, of Gallows Inn; Mr. Tapley, Bath-street; and Messrs. Newton, Blount, John Shorthose, Jos. Stirland, Job Poundall, Fretwell, Booth (of the Druids' Arms), and "Billy" Trueman, all of Cotmanhay and Shipley side. Question 217 What was Christopher Harrison's 'nick-name' ? Question 218 What was the name of his house ? Question 219 What is the present name of 'the West Hallam-road' ? Question 220 Which son of Esau Hooley got into 'trouble' with school-master John Ryder, about 1852 ? Question 221 What was the profession of John Keate Tapley ? John then recalls the School at Mackworth, mentioned by 'An Old Scholar' in the previous letter ... We passed the Boarding School at Mackworth ... and the Principal of which was Mr. Thos. Russell, M.A., who at one period had in his charge, Charles Stewart Parnell, the "uncrowned King of Ireland". Mr. John Sandars, grocer and hop and seed merchant, Market-place, Derby.... he was my second employer in Derby, and I spent six pleasant years in his old shop .... I left Mr. Sandars for my present situation, over 31 years ago Question 222 Who else learned his trade, serving with John Sandars ?

Shortly after this, another letter from An Old Scholar was published.

Letter 47
My mind reverts to things and places in this good old Ilkeston, the place of my birth -- fifty years ago and more. There was the 'round house' referred to by "Enquirer", I well remember, and also the stocks, which stood in front of it, facing Mr. Merry's shop. .... According to Mr. Trueman's 'History of Ilkeston', these were removed about the year 1842. It was then I went to seek fresh fields and pastures new at Mackworth, that quiet little village in Derbyshire. .... (of) our old friends, there are several whose names I have not seen mentioned. Samuel Whitehead, who kept a small druggist's shop on the site of what is now called the Stackyard, just below the Poplar Inn. He was also the Clerk of the Parish, when the Rev. G. Searl Ebsworth was the Vicar; and Wm. Campbell, tailor, who kept watch at the Ilkeston Toll Gate, which used to stand at the junction of the Nottingham, Derby, and Stanton Roads. ...... Then there was James Chadwick, general dealer, at the bottom of Bath-street, who was noted as a pedestrian, having walked to Manchester and back. He also, among his wares, sold riddles, but he used to tell people, in his quaint style, that he had none but what had holes in; and he had no vinegar but what was sour. Question 223.What was the 'Round House' used for ? Question 224. What (possibly) qualified Samuel Whitehead to practise as a druggist ? Question 225. Apart from being a tailor and toll-keeper, what else was William Campbell renowned for, in Ilkeston ? Question 226. Why was James Chadwick sometimes referred to as 'Professor Chadwick' ? I cannot help also putting in a word about Mr. Christopher Harrison, the hosier ... His workshop was in Skeavington's-yard the called, now known as Roby-yard, in South-street.

At this point the Ilkeston Pioneer published an update of the arrangements for the ‘gathering of the old boys’, to be held in the Town Hall on August Bank Holiday … entrance to those Ilkeston born and over 50 years old only.

Shortly after it published a clarification … the gathering was not an open invitation to all the old people of Ilkeston to provide them with a treat. The newspaper repeated the strict criteria for attendence at the occasion.

Before this gathering Bullock-edge Nook came back with another letter, dated July 26th 1893.

Letter 48
... the late Wm. Tunnicliffe, who was parish clerk more than 50 years ago, and whose duty it was to ring the bell at the church every Sunday morning at eight o'clock. This was regularly done until the year of the general election of 1841, when he was stolen, along with my grandfather, and "bottled", as it was termed, at Belper, until after the election. I might give you sayings and doings of the late J. Tilson, J. Watkinson, J. Ross, and old John Mason; and time would almost fail me to tell of "Bobby Stever", "Pin Goose", Milk O Jack, Jonathan Stever, "Trot", "Giant" Sisson, and old "Joker". Question 227. Why would William Tunnicliffe be "stolen" ? Question 228. What is meant by "bottled" ? Question 229. Who was Milk O Jack ? Question 230. Why was "Trot" so-called ?

Who is this serious-looking gentleman ?

What was his nick-name ?

Where in Ilkeston did he live ?

Why is he carrying a hand-bell ?

What occupations was he employed in ?
(I will accept three)

Where in Ilkeston did he die ? 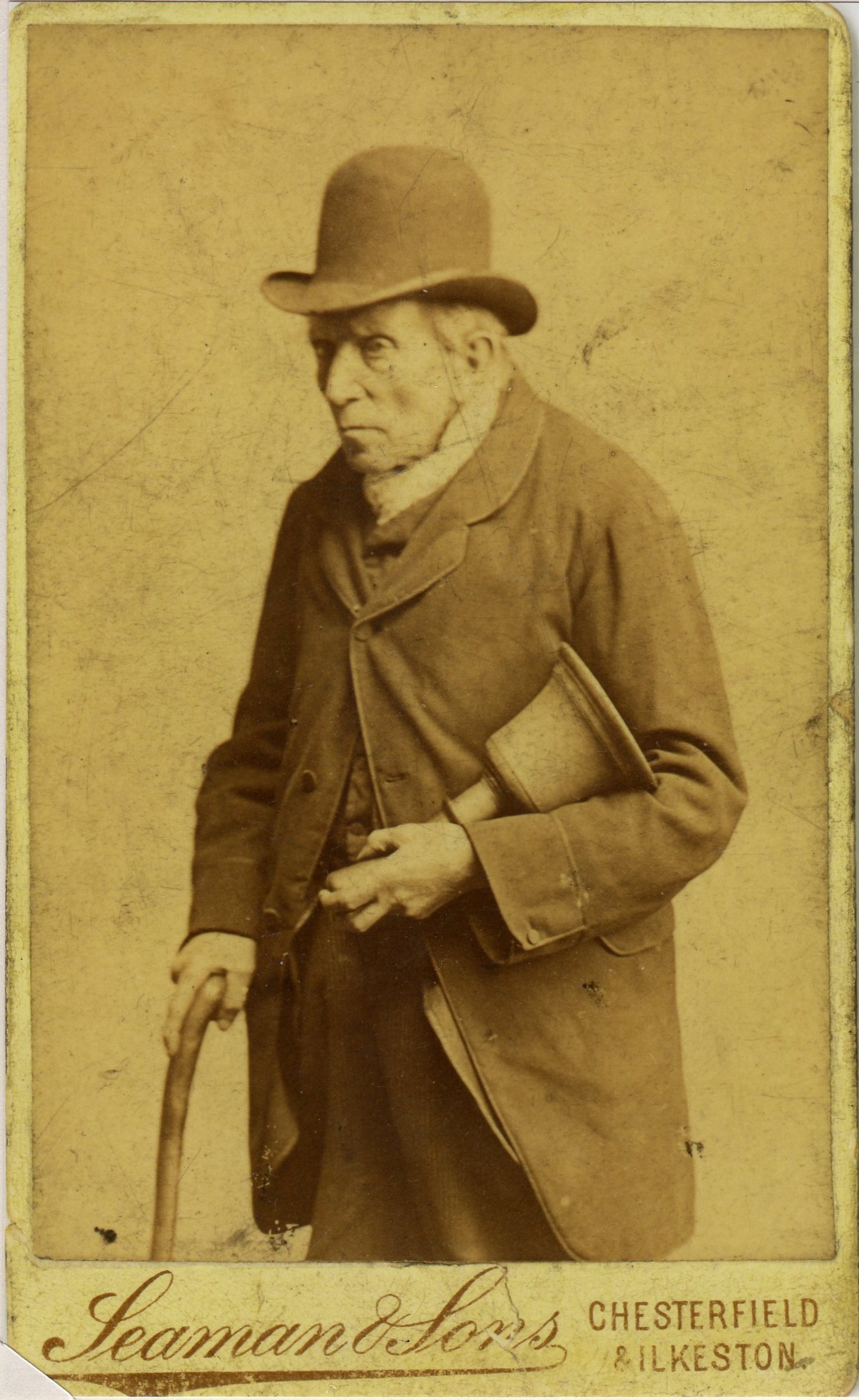