What can we see?

Over 50 years later and it is April 1854 — just a few months before Adeline’s birth in East Street — and who should we bump into but Venerable Whitehead*, a man who can boast that “there is hardly a street or house in Ilkeston which has not some associations” that he would not forget ??
As we walk with him into the graveyard of St. Mary’s Church and look out over the town he reminisces about the past and reflects on the present.

“Round (this) venerable and beautiful though ruinous church there was, when I first knew it, a population, hardly, perhaps, exceeding 700. It now exceeds 7000…. I stood on the battlements of that ugliest of church towers on a December day in last year and cast my eye over the fair scene before me…
“Where I had known crazy and crumbling cottages, mansions had arisen. Rows of well-built houses had usurped the place of back and black slums. 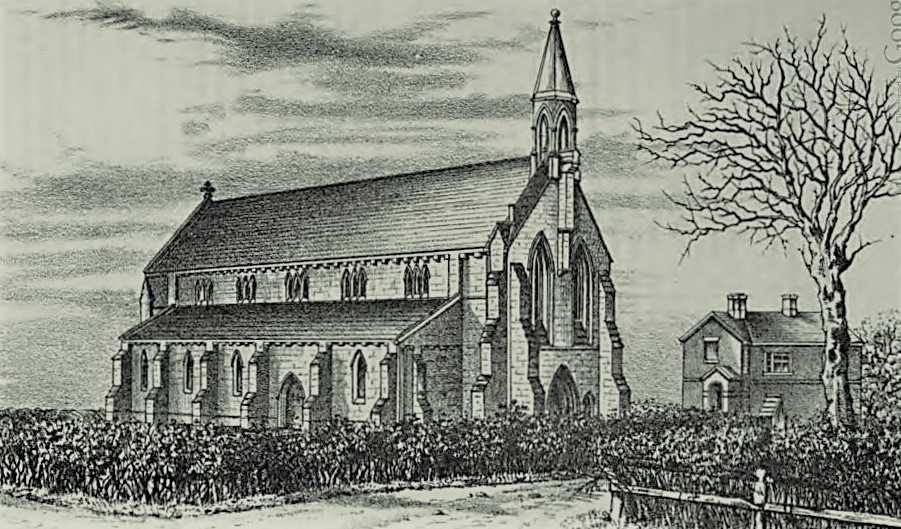 “A new church (at Cotmanhay), schools, chapels, baths, institutes, were pointed out to me. I was delighted.
“It was market day, and the market-place, though chiefly spread with humble wares, … had stalls of beef that reflected credit on the neighbouring agriculturalists. The manner, dress, and deportment of the rustics that were frequenting it had improved as much as the buildings that surround it. No fight was going on … I feel persuaded that I could scarcely have stood on that tower, in any day of the year, fifty years ago and not have seen some such sight. In many a spot where dung-heaps were wont to be deposited, shops, with elegant fronts glittering with plate-glass and shewing advantageously rich and rare wares within, now meet the eye. In one the fashions are displayed; in another, creature comforts; even in Mr. Churchwarden Riley’s shop, glass has usurped the place of lattice-work, and early fat lamb, beautifully grained beef, and South-down mutton, form a picture that a Dutch painter might revel in..”.

Venerable Whitehead then remarks that the old pump in Anchor Row has been removed, the old worn causeway up Bath Street replaced by bricks. The town now has a post-office, a bookseller’s shop, a railway and station, and a well-conducted newspaper… all evidence of the progress made by Ilkeston in the 1850’s.

Always a ‘Man of Ideas’ — at least that is how he thinks of himself !! — Venerable Whitehead then has suggestions to make.
Perhaps the town is in need of a Local Board of Health which has the power to monitor the new houses being built, to ensure that they all have provision for water, drainage, sewage and the ‘necessaries’ for civilised’ living.
And then he presses this point, by questioning the architecture of the new building, and particularly the fact that the new housing might lack the provision of water, drainage and toilets.
“Paltry, gimcrack houses are unworthy of the good sites which the Market-place and principal streets afford – Men of Ilkeston! Look to these things. Have a pride in your good Town – regard it as having capabilities for becoming one of the first towns in the Midlands – as it is already of the district. Freeholders, don’t allow your building ground to be covered with buildings unworthy of Ilkeston. Renters, remember that you live under one of the best landlords* – noble in nature as in name – who takes that interest in your town that will make him rejoice in what tends to its amelioration”. (*That ‘best landlord’ was the Duke of Rutland).

To some extent Venerable Whitehead’s point about housing was echoed in the Pioneer of the same time.
In a short article, the newspaper noted that in the last ten years, 500 house had been erected in Ilkeston and given growth to places like Evans’ Row, Potter’s Row, Wheatley’s Row, Gregory’s Row, Bailey’s Row, Clay’s Row, Club Row, as well as rows on Belper Street and Park Lane. But this expansion was causing Bath Street to be ignored by the developers, and it was becoming shabby and denuded of quality buildings. It was to be hoped that the improvers would now turn their attention to provide buildings of a somewhat superior class on the main thoroughfare, and so encourage men of business and of wealth into the area.

*Contained within the several Pioneer articles of the Venerable Whitehead there are clues to his identity. I tentatively suggest that he was Thomas Rossell Potter, son of John and Mary (nee Rossell), born in West Hallam in 1799. Described as ‘author, historian and private tutor’, he lived most of his life in Wymeswold, Leicestershire where he taught in a small school.
There is a detailed entry for him in Wikepedia.
He also appears at the ‘renewal‘ of St Mary’s Church in 1853.

In the same year, and just after Adeline’s birth, the Nottinghamshire Guardian was commentating on Ilkeston’s annual feast, which was “always held on the Sunday and week following Michaelmas-day”.
1854 saw a particularly spectacular occasion, with much bustle, shows and stalls, eating and drinking, enjoyed by the inhabitants and throngs of out-of-town visitors.
“The various new collieries and iron works in this parish and vicinity cause the town to be in a flourishing condition. Upwards of 100 houses have been built (or are building) this summer, and all of them are let as fast as they are finished”.

And in the following year — 1855 — the same newspaper described ‘Ilkeston Bricks’** as “the best for paving purposes, being from the tenacity of the clay of which they are composed hard and durable, impermeable to water and soon dry after being wetted”.

The Horridge family of brickmakers …. William Horridge of Cotmanhay, (1779-1863), the son of Jonathon and Mary (nee Dawes), was the first (?) of his family to try his hand at being a brickmaker, though his father was a bricklayer. William was also described as a farmer, as brickmaking was a seasonal occupation, mostly undertaken from the end of March to the end of August. His works were next to the Granby Colliery. Later his younger brother Jonathon (1799-1845) joined the trade.

In November 1881, under the heading of ‘The Erewash Valley’, an ‘Occasional Correspondent’ to the Nottinghamshire Guardian wrote of Ilkeston as “boasting of the title of ‘Queen of Erewash Valley’, (having) upwards of 15,000 inhabitants. The place has a certain peculiarity for which it is remarkable. No attempt, at least until lately, has been made to attain uniformity in its streets, and, consequently, it has been aptly termed a ‘confused mass’. It has, by others, been described as a town whose houses might have been dropped down from the skies by accident”.

The map below shows the Market Place area around 1881 and names some of the people and premises we will soon visit (or have visited) …. 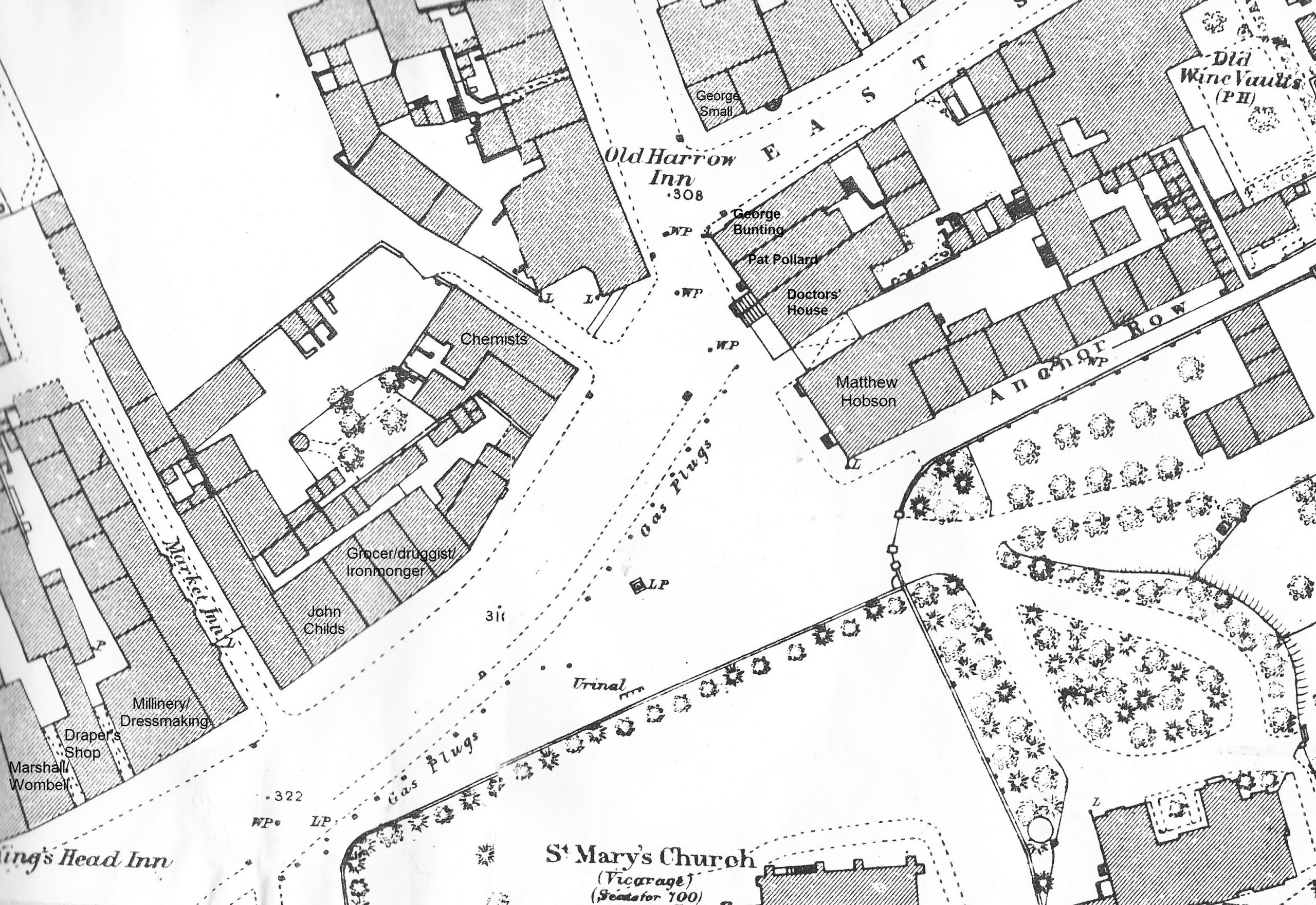 Clockwise, from the King’s Head Inn (bottom left), we have the Marshall shop, a draper’s shop, the Wigley family and the Market Tavern, John and Elizabeth Childs, the Merry family, a few shops with a variety of occupants including Edwin Wragg and John Poole, and the chemist shop. Finally the Harrow Inn.

Then, over Bath Street, at its corner with East Street, we find George Small, and across the street, George Bunting, Pat Pollard, a succession of Ilkeston’s doctors, and then Matthew Hobson‘s premises. (later the site of the Liberal Club, and now of the Observatory)

A word of warning … this is an area in flux, subject to many changes in structure and residents, and so not all of the people we will meet are present in 1881. Several had died or had moved out of this area.

A final word in this section from Adeline …. “When we look back, and see the wonderful improvements that have taken place in Ilkeston, it seems like a dream. Bath Street is altered out of all recognition and it is only when we see the noble church of St. Mary that we realise that it is indeed the Ilkeston of our birth and childhood”.

Standing in the Lower Market Place we can look towards the top of Bath Street and cannot fail to see the Old Harrow Inn.