Up the east side of Bath Street

In 1855 the Ilkeston News speculated on the ‘probable future’ of Ilkeston.

“The welfare of the masses is the object of every true philanthropist, and Ilkeston is a town where much leading beneficial influence is needed. At present it is in an embryo condition; the chrysalis has not fully emerged from its shell; yet there is a gradual development, which is more surely making known the physical, mental and moral resources of this important district. And in proportion as education, civilisation, and refinement keep pace with the more external improvements, the rude and harsh features of a newly-forming town just struggling into a marked existence will pass away – as the grey mists of the morning, with their chilling dews, before the rejoicing beams of the gently conquering sun".

As we walk around the town we may see if the newspaper’s prophecy was to materialise.

And so we set off , up the east side of Bath Street (on the left).  She described it thus — but as today, walking up it could still leave you knackered!!

This is what lies before us …. You can just see St. Mary’s Church in the far distance (middle) 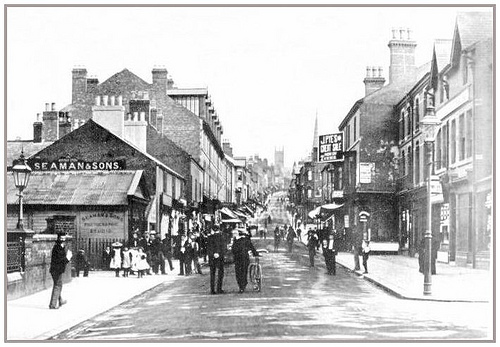 Or do you prefer fewer pedestrians ? 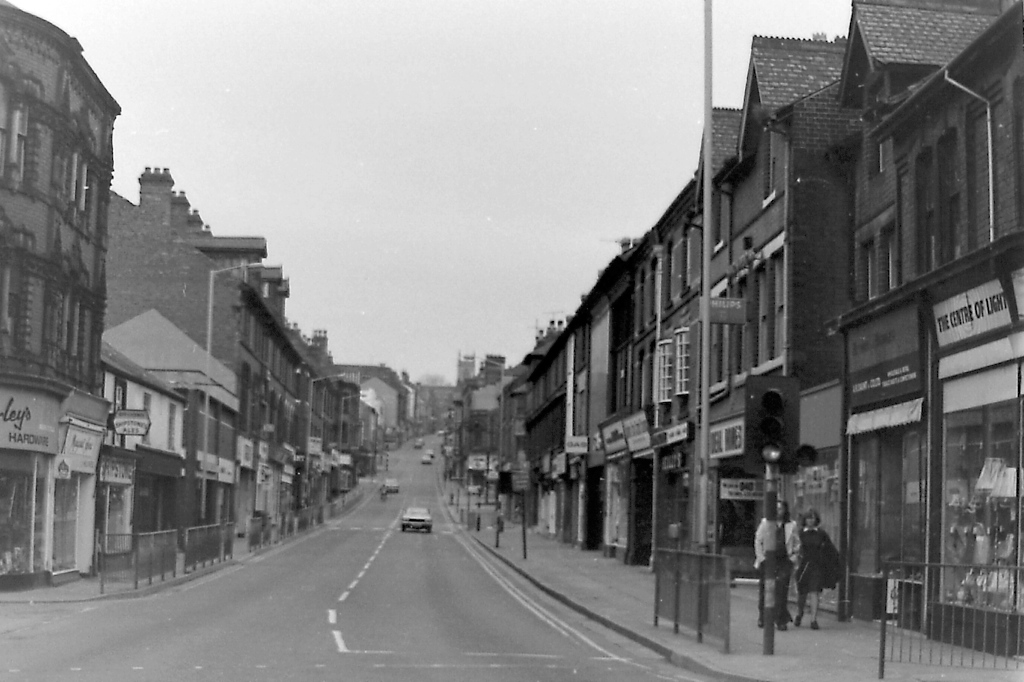 Adeline Wells was born Elizabeth Adeline Columbine in East Street, Ilkeston, on Monday, October 2nd 1854 and lived in the town until she moved to Nottingham with her family about 1879. Towards the end of the century, with her husband and son, she moved to live in Eastbourne, Sussex, where she spent the rest of her life.

In March 1933 Adeline contributed an article to the Ilkeston Advertiser with the title ‘The birth of a street‘ in which she imagined the development of Bath Street.
After describing the growth of Ilkeston from the fifth to the twelfth centuries in about a dozen paragraphs, she continued to describe the town’s main thoroughfare.

The track up the hill was in a very bad state, and the people made great complaints about it.
At last the gradient was made easier, and the track itself had stones laid upon it which were fastened together by a rough cement. This path was called ‘The Caussey’. One or two houses were built on the bank and the track was called ‘The Strait’, which soon developed into ‘The Street’.
In the eighteenth century the banks were once more cut back, the caussey widened and footpaths made, and ‘The Street’ became ‘The Town Street’.
About 1830, an alkaline mineral spring was discovered, and it was hoped that the town would become a spa like Matlock. So baths were erected. Hives’ Inn was enlarged and called Hives’ Hotel. (Later the Rutland Hotel)
The Town Street was re-named Bath Street, and everyone was in readiness for the expected influx of invalids and otherwise, who would take the waters. But alas! Their expectations were not realised, so the Baths were closed and the Bath House became a private house.

“Bath Street was originally 68 feet wide, and in consequence of the gradient being a steep one, a cutting was made sufficiently wide to suit the traffic of the day.
“Heanor road was set out 68 feet wide — sixty feet for the pedestrian and vehicular traffic, and eight feet for a ditch of four feet on each side, to drain the road”.
(from a letter to the Ilkeston Pioneer, May 4th 1917, by Joseph Shorthose of Church Street.)

I remember when Ilkeston was such a quiet countrified place that I could say who lived in every house in Bath Street and South Street. Alas! it is very much altered.
Bath Street in 1850 was very different to the Bath Street of today.
In Bath Street one could walk along without any fear of being jostled.

We begin at the Town Station at the bottom of Bath Street. (that is, approximately to the left of the photographer !!)         Home Page